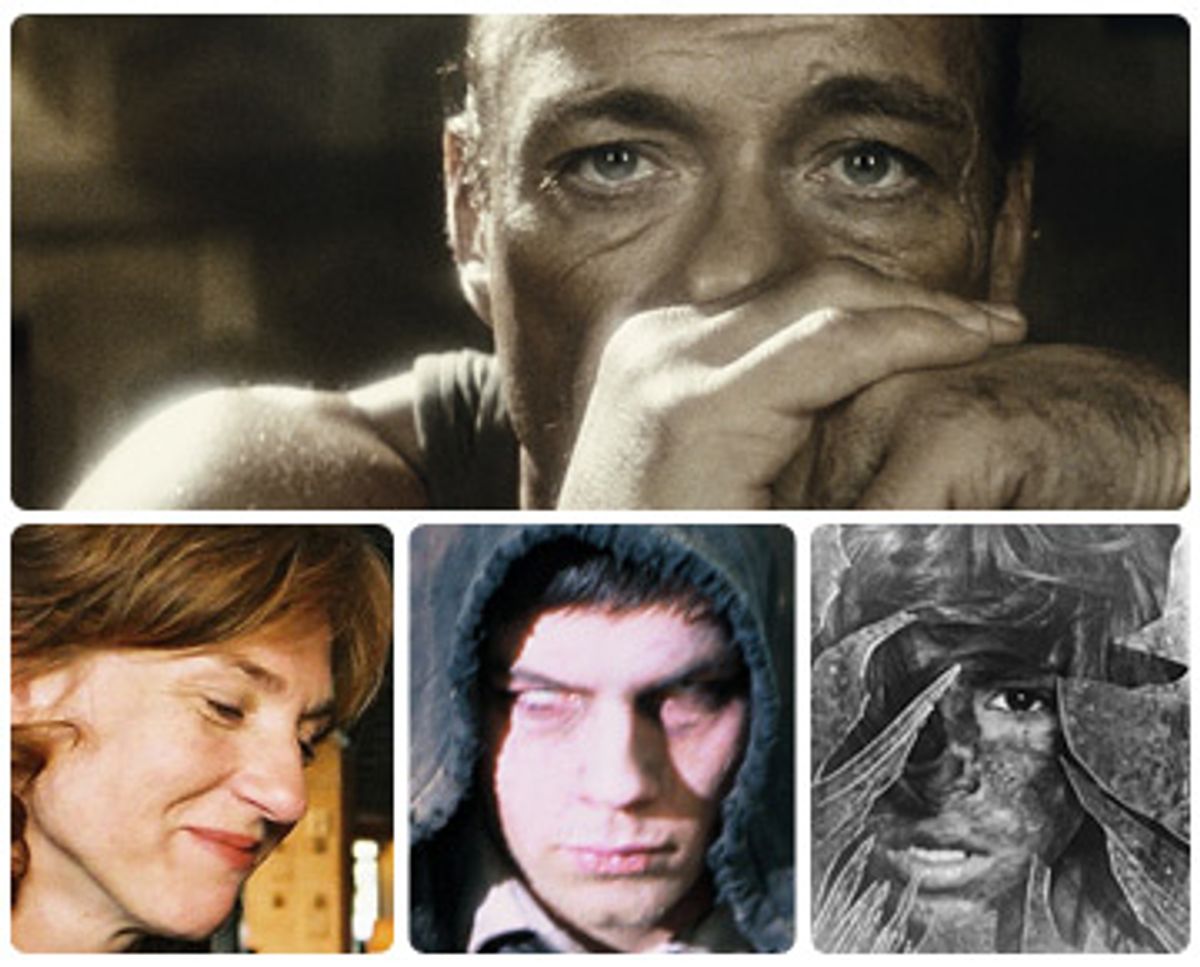 Jean-Claude Van Damme's career has reached that awkward stage. I don't mean the stage of being a washed-up action star who makes cheapo straight-to-video films in unlikely corners of the globe; Van Damme has been in that stage for at least a decade. I mean the stage of quasi-nostalgic, semi-pathetic self-mockery, the stage of becoming "Jean-Claude Van Damme" instead of the real thing. In "JCVD," a loopy, hit-and-miss, postmodernist affair from the young French director Mabrouk El Mechri, Van Damme plays himself, or at least a halfway plausible version of himself -- a fading movie star with money problems, the meta-Muscles from meta-Brussels -- who gets mixed up in a low-rent post office robbery.

You can't accuse El Mechri of lacking ambition. "JCVD" feels like an extended, if occasionally amateurish, tribute to Martin Scorsese and Sam Peckinpah, complete with hardboiled cops, a stringy-haired, psychotic villain in a crappy leather coat, and a used tea bag strapped over the lens to give the streetscape that dingy, unhealthy look. Not that the grimy, working-class district of Brussels, where this hostage drama unfolds needs much help on that front. On his way into the post office, Van Damme the character (played by Van Damme the actor) is accosted by a couple of losers from the video store across the street, which specializes in porn and action films. They're big fans, so he poses for a few snapshots and then moves on to his date with destiny.

Fictional Van Damme has just gotten off the plane from L.A., on his way to visit his mom. He's exhausted and broke, in that way that only a person who has been fabulously wealthy can be broke. His agent's offering him garbage and he's embroiled in a nasty custody case with his ex-wife; he bounced a check to his lawyer and needs to wire him thousands of dollars right away. As in many European countries, the Belgian post office is also a bank, and a few minutes after the most famous Belgian citizen enters this particular bank, a robbery begins. Van Damme appears at the window, telling the cops to back off. Shots are fired and hostages taken.

SWAT teams, TV reporters and hordes of onlookers surround the building, titillated by the possibility that their oft-belittled nation's favorite son has come home only to immolate himself in public. At the risk of issuing spoilers, I will simply advise you that it's not that simple. As far as what's actually going on in the movie, and what it's supposed to mean, you're on your own. Frédéric Benudis and Christophe Turpin's script is struggling so hard to be a morally ambiguous '70s Americana crime saga that A) it's really hard to figure out what's actually happening, and B) when you can figure it out, it doesn't make any sense.

That's too bad, because Van Damme's remarkable performance -- I say this in all seriousness -- comes pretty close to redeeming the picture's murky and overly complicated artistic intentions. The movie's fictional Van Damme is a guy torn between people's fantasies about him, the fantasies he has acted out over and over again, and his own sense of who he is, a poor kid from an insignificant country who moved to America with no money and no English and achieved an extremely strange kind of fame, and who now sees it slipping away again. There's an extended shot in which Van Damme literally rises out of the post office and out of the movie and addresses the viewer directly about his life, his movie career and his current plight. It's maudlin and embarrassing and runs on too long, but it's also honest, and exposes most of "JCVD" as clunky artifice. (Now playing at the Angelika Film Center and AMC Empire in New York, with wider release to follow.) It's a short train ride from Brussels to Amsterdam, but Dutch director Mijke de Jong's meticulous divorce drama "Stages" is about a million miles from "JCVD." Built around a series of episodic encounters between the previously married Roos (Elsie de Brauw) and Martin (Marcel Musters), in which they discuss -- or fail to discuss -- the mysterious withdrawal of their 17-year-old son, Isaac (Stijn Koomen), "Stages" has obvious roots in the films of Ingmar Bergman and John Cassavetes and in modernist theater. Don't let that stop you, because it's also a mesmerizing formal and technical achievement, with two brave and shattering performances.

Even in European films, you rarely see such intense focus on characters these days. Martin and Roos are members of a familiar international class, the urban educated haute bourgeoisie, but de Jong never lets them become types. They aren't torturing each other, in the mode of comic divorced couples, but they still have intense feelings for each other and can't quite leave it alone. Warm, whimsical and attractive Roos is the one who first captures our sympathy, but it's Musters (a veteran of Dutch theater) who has the tougher assignment as Martin, a fatuous and conceited writer who -- as we gradually grasp -- is trying to medicate his profound unhappiness with an onslaught of ethnic food, red wine and cigarettes.

De Jong begins every scene with a detached establishing shot -- most often two people in a crowded restaurant, their conversation inaudible amid the hubbub. Then cinematographer Ton Peters moves in to hover just over one character's shoulder, capturing the other's face in tight focus. During Roos' dinner date with her mother, we never see the mom's face; when Martin goes on a date with a sycophantic younger woman, we can tell that she's black but learn almost nothing else about her. You could call this technique ruthless, but I felt like it forced me to engage with Martin and Roos as people I was getting to know, who had both likable and unfortunate qualities, rather than relying on my immediate prejudices and projections.

It's easy to embrace Roos' view of things and blame sardonic Martin for everything that went wrong in their marriage and whatever opaque teen problems Isaac is going through (which never become particularly clear). Probably too easy. I don't think de Jong is man-bashing; I think she's setting a psychological trap by holding these characters up to the audience as mirrors. No doubt "Stages" is too much in the mode of Bergman's "Scenes From a Marriage" or Edward Albee's "A Delicate Balance" to reach beyond a big-city art-house audience, but it's an extraordinary achievement by a director to watch. (Now playing at Film Forum in New York, with more cities to be announced.) Strange, dry and intriguing, François Truffaut's "The Wild Child" at first seems like an unlikely departure for the great French director. Verging on docudrama, this 1970 film is closely based on the diaries of a doctor named Jean Itard, who in the year 1800 became the custodian of a "wild boy" found in the forest of Aveyron, in southern France. The boy, whom Itard named Victor, was about 11 years old and could not speak; he had evidently lived on his own in the woods, eating such plants and animals as he could find, for several years. (It's not possible to say much with certainty about the Aveyron case after 200 years, but many contemporary researchers suspect that Victor was born mute and possibly autistic, and was abandoned by his parents for that reason.)

Truffaut took the role of Itard himself, partly so he could stay close to Jean-Pierre Cargol, the French Roma (or Gypsy) boy he recruited to play the almost impossible part of Victor, a boy who has survived through animal instinct and for whom every aspect of human society is new. The story of Itard's efforts to "civilize" Victor -- to introduce him to a human range of expression and emotion -- could easily have become banal and sentimental, and Truffaut was never immune to such failings. But he plays Itard as a disciplined, even repressed man of science, who tries not to let his own emotions interfere with an Enlightenment inquiry into human nature. Nestor Almendros' old-fashioned black-and-white cinematography creates another layer of detachment. (It was Truffaut's performance in this film, by the way, that persuaded Steven Spielberg to cast him in "Close Encounters of the Third Kind.")

As if set free by these formal restrictions, Truffaut made a lovely, deceptively simple and profoundly moving film, arguably his most thoughtful exploration of the collision between childhood and civilization. You could even say that "The Wild Child" restates the themes of Truffaut's vastly better known "400 Blows" in starker and more ambiguous terms. Many viewers have interpreted the latter film (wrongly, I would argue) as a defense of the dirty innocence of childhood against adult corruption. In "The Wild Child," I think it's clearer that despite Itard's noble motivations he has no good or perfect choice: He can't quite make Victor "normal," and he can't leave him alone. A beautiful, heartbreaking picture, one of Truffaut's best. (A new 35 mm print is now playing at Film Forum in New York. "The Wild Child" is also available on DVD, and I suspect a new release is in the works.) Jey Crisfar in "Otto; or Up with Dead People."

Is the hero of Bruce LaBruce's "Otto; or, Up With Dead People" really a rotting zombie who has crawled out of the grave to feast on the flesh of the living? Or just a sweet, misunderstood gay boy rebelling against corrupt, hetero-fascist late capitalism? Well, it'd be cheating to tell you. And it would also presume that I knew the answer. For Canadian queercore pioneer LaBruce, whose movies ("No Skin Off My Ass," "The Raspberry Reich") exist in that nebulous zone between underground film, gay porn and John Waters-esque self-mocking hipster shtick, Otto's sexual identity (and degree of undeadness) is fluid, unfixed and polymorphous.

Stumbling through the streets of Berlin in filthy Comme des Garçons wear and smelling increasingly gamey, Otto (the fittingly skinny and affectless Jey Crisfar) becomes the star of an idiotic lesbian filmmaker's zombie flick-cum-political allegory, dining on pigeons and cats in a futile effort to quench his cravings for human flesh. On one level, LaBruce is eager to offend and outrage all possible viewers, from mainstream liberals to gay guardians of politically correct expression to self-serious underground artists. But in between his disappointing encounters with would-be lovers and gay-bashers, Otto is just lookin' for love in all the wrong places. Be he alive or be he undead. (Now playing at the IFC Center in New York, and opens Nov. 28 in Los Angeles, with other cities to follow.)