It's proving difficult to peer inside Obama's still tightly closed Cabinet. But so far his presidential transition has looked deliberate and impressive. 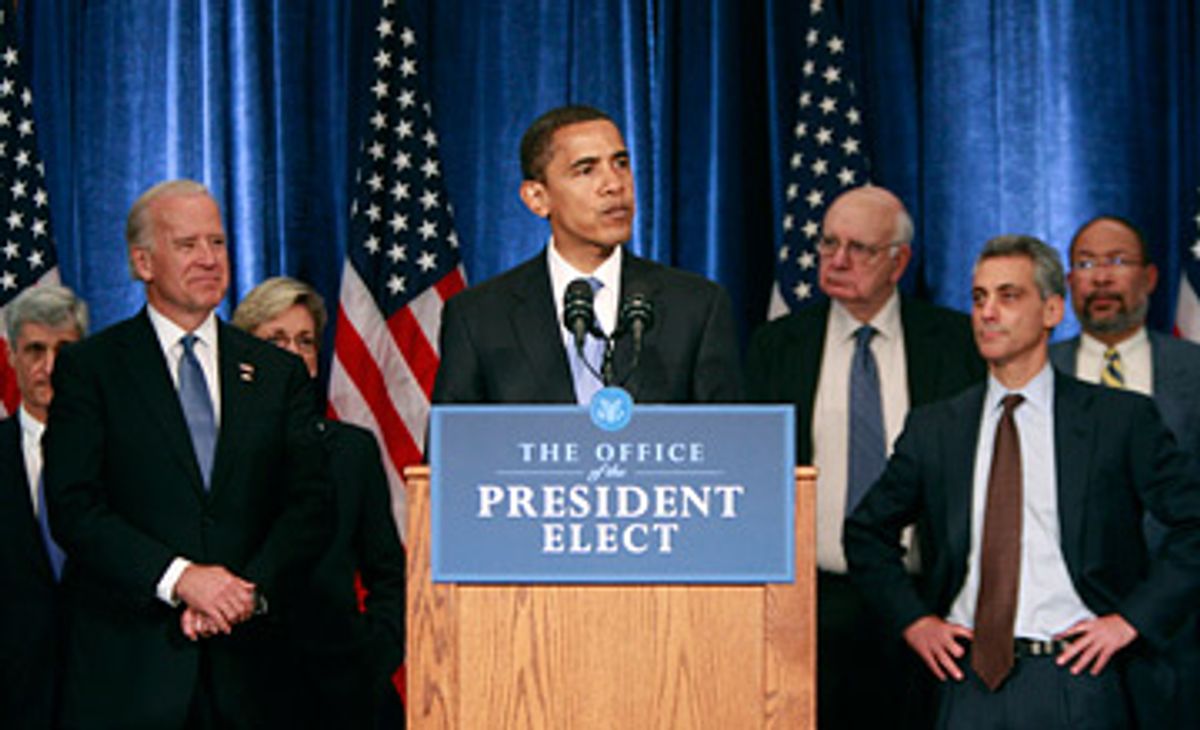 Amid the fervid speculation over the identity of the next secretary of state or even the next assistant secretary of labor for administration and management, there is a truth that is galling to gossip-mongers -- Barack Obama and his closest advisors know how to keep secrets. With nearly 10 percent of the transition period between administrations already gone, we know more about the factors that will dictate the selection of the White House puppy than we do about the reasoning behind the choice of a would-be Treasury secretary.

As Valerie Jarrett, co-chair of Obama's transition team, put it with deliberate blandness on "Meet the Press" Sunday: "I think one of the real strengths of Sen. Obama's campaign and now President-elect Obama's transition is that he really does like to think this through thoroughly and not telecast what he's going to do until he's ready to make a decision."

No one wants to read articles titled "Entire Obama Administration Shrouded in Mist and Mystery." So to accentuate the positive, we do have a pretty reliable handle as to who will be in the room with Obama (and presumably Joe Biden) when the major personnel decisions are made. There will be Jarrett, an African-American Chicago real estate entrepreneur who has been close friends to the president-elect and the incoming first lady for two decades; Pete Rouse, the press-shy former chief of staff for Senate Majority Leader Tom Daschle, who performed the same role for a newly elected Illinois senator named Obama; the Chicago-born John Podesta, Bill Clinton's former White House chief of staff, who stealthily organized the Obama transition during the fall campaign from his Washington perch at the Center for American Progress; David Axelrod, the Chicago-based political strategist, who was the inspiration behind both Obama's up-from-nowhere 2004 Senate victory and his 2008 run for the Rose Garden; and incoming White House chief of staff Rahm Emanuel, a sharp-elbowed veteran of the Clinton White House who was elected to Congress in 2002 (from Chicago, natch) with the help of Axelrod (double natch).

With all these Chicagoans (aside from Rouse) creating the Obama administration, it is time to drop the Second City urban inferiority complex. If there is an ideological orientation to this team, it seems to be Democratic centrism rather than full-throated liberalism. Bill Galston, a former top domestic advisor to Clinton now at the Brookings Institution, notes that Obama "has a great respect for expertise. His instinct is that in any field, gather the leading experts and go after them." As Galston puts it, "This is not amateur hour -- this is not crony time." Paul Light, a professor of public service at New York University and an expert on governmental organization, said admiringly, "Obama is extremely well-prepared. There is a lot of talk coming out of the Bush administration about a seamless transition. But in many instances, the Obama people know as much about what is happening in the Cabinet agencies as the Bush people do."

After a historic election, the press and the public are craving names -- any names -- to put flesh and flash on that vague entity known as the Obama administration. Even if Cabinet appointments have almost never been unveiled in November, there is a panting eagerness for personnel action in the face of the financial crisis. "So many reporters are saying that he has to name his Treasury secretary this week or next week, but you can't do this without a decision-making process in place," says political scientist Martha Kumar, who directs the White House Transition Project, an academic center designed to assist the president-elect and his team. Kumar points out that a White House counsel needs to be appointed, and presumably will soon do the vetting of Cabinet officials and formally establish ethics guidelines.

Presidential scholar Stephen Hess, a veteran of the Eisenhower and Nixon administrations, has just published "What Do We Do Now? A Workbook for the President-Elect." Hess takes a bemused view of the media's obsession with compiling lists of the purported front-runners for every government job this side of ambassador to Latvia, even if the names turn out mostly to be wrong. As Hess recalled, "Ed Meese, who ran transition for Reagan in 1980, came up with the Meese Rule: 'People who know don't talk and people who talk don't know.' That is as true now as it was then." As a senior Obama advisor bluntly puts it, "Almost everything you read about transition is not accurate."

Major news organizations, which have invested heavily in putting their reporters on the campaign planes, expect nonstop scoops about appointments even when those close to the personnel decisions have taken vows of silence. Having covered the 1992 Clinton campaign for Time, I recall with embarrassment sitting in my room at the Capital Hotel in Little Rock (where transition headquarters were located) waiting for someone -- anyone -- to call me back for a name-the-Cabinet story. With my deadline looming, political advisor Paul Began broke the radio silence to say that he had not talked to Clinton since Election Night and was totally out of the loop on appointments, but did mercifully pass along a few third-hand rumors. Out of this kind of chaff, I concocted a Cabinet story more notable for being done than being right.

There are, of course, occasional orchestrated leaks as a way to gauge how the Senate and important constituency groups might react to a potential controversial nominee. "What the Obama people have been trying to do in floating Larry Summers' name for secretary of the Treasury is to gauge how upset his appointment will make the feminist community," theorizes Paul Light. Other possible Cabinet nominees like Arizona Gov. Janet Napolitano (for attorney general) have suddenly grown reticent about talking about their political future with longtime friends.

A presidential transition is a time of hope and heartbreak as the incoming president's team allocates the ultimate prize in politics: high-prestige jobs that will burnish a résumé for a lifetime. Obama's first week has been impressive, with hints of months of careful planning behind the scenes, as opposed to the make-it-up-as-we-go-along improvisation famously carried out by Bill Clinton. Transition is a grueling test for any incoming president, who after the rigors of a long campaign deserves a few weeks on a beach with his family. But with Wall Street in turmoil and America bogged down in two wars, these 10 remaining weeks until Inauguration will soon be recalled as the relaxing good old days for Barack Obama, 44th president of the United States.