Their eagerness to award Joe Lieberman with a powerful Homeland Security chairmanship is an important reminder of what the Democrats are. 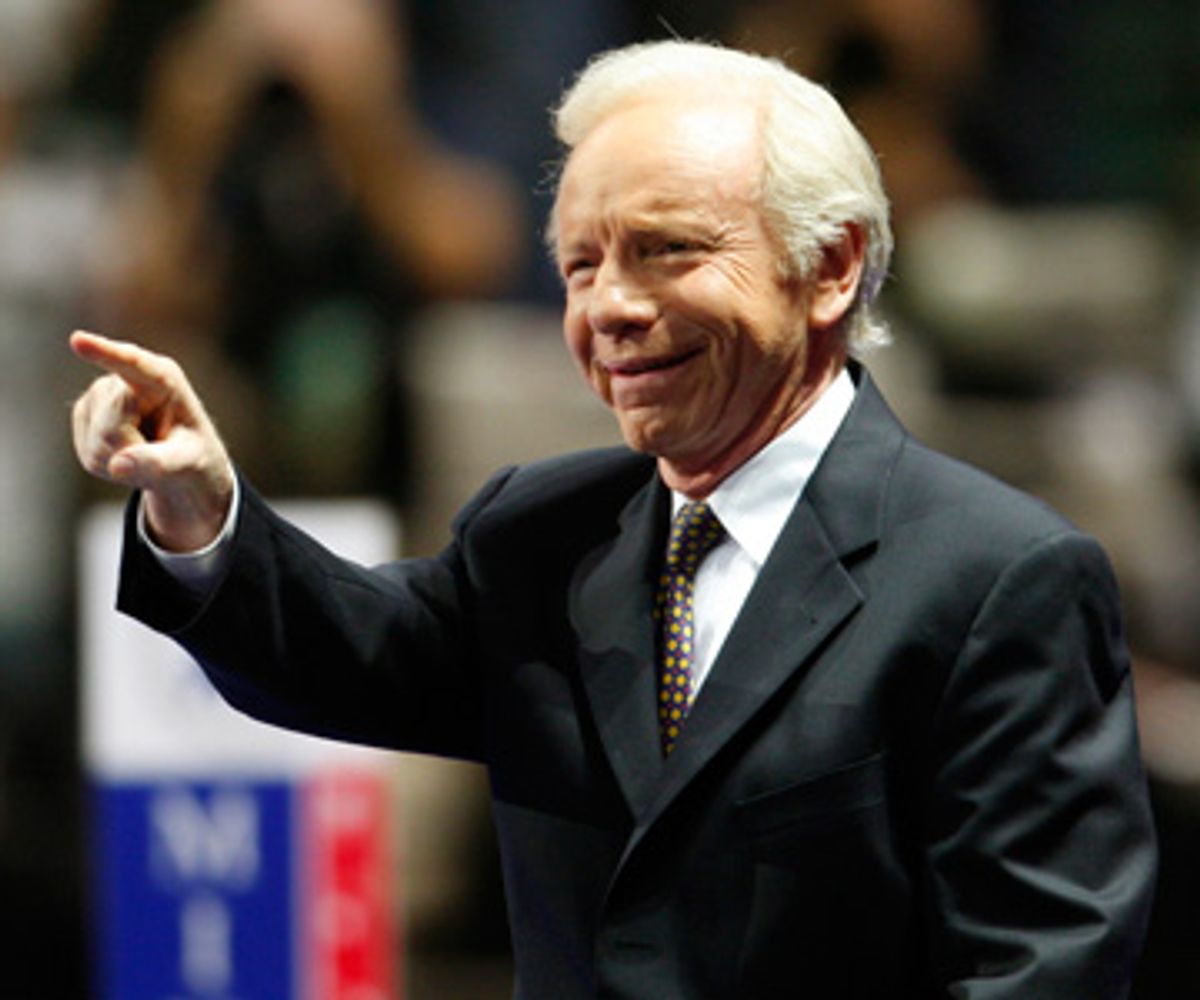 Though it hasn't happened yet, it is appearing increasingly likely that Senate Democrats -- led by Barack Obama (who seems to be playing a much more active role in all of this than his spokesperson yesterday suggested) -- are going to choose Joe Lieberman to serve as their Chairman of the Homeland Security and Governmental Affairs Committee in the next Congress.  If that happens, there will be one important silver lining:  it will remind many people, who have understandably forgotten due to the euphoria last week, exactly what most Beltway Democrats are, what their priorities and beliefs are, and to whose opinions and concerns they do and do not pay attention.

It is worth remembering that the Democrats who are going to exert dominant political control are the same ones who have provoked so much scorn -- rightfully so -- over the last several years, and particularly since 2006.  This is the same Democratic Party leadership which funded the Iraq War without conditions (and voted to authorize it in the first place); massively expanded the President's warrantless eavesdropping powers; immunized lawbreaking telecoms; enacted the Patriot Act and then renewed it with virtually no changes; didn't even bother to mount a filibuster to stop the Military Commissions Act; refrained from pursuing any meaningful investigations of Bush lawbreaking; confirmed every last extremist Bush nominee, from Michael McConnell to Michael Mukasey; acquiesced to even the worst and most lawless Bush policies when they were briefed on them; and on and on and on.  None of that has changed.  That is still who they are.

Joe Lieberman didn't merely campaign against Barack Obama and several other Democrats.  That's the least of his sins.  He was not only among the most vocal supporters of the Iraq War, but at least as bad, has endorsed and supported every last radical Bush policy to expand executive power and surveillance activities while destroying core constitutional liberties and checks and balances.  He used his Chairmanship for only one purpose: to block oversight into Bush scandals and corruption.  He has spouted the most defamatory attacks, not only against Barack Obama, but against war opponents generally.  More significantly still, Democrats in his own state -- his own constituents -- booted him out of the party, no longer wanting to be represented by him.

That is who Senate Democrats appear well on their way to selecting to serve as their Chairman of Homeland Security, of all committees.  That's because nothing that Lieberman has done really bothers them.  Endorsing the Iraq War and the full panoply of radical Bush policies isn't disqualifying in the least because so many of them also endorsed that and support it, or, at the very least, it's not a priority for them.  They care even less what their "base" thinks, what the so-called "Left" wants.  Few things in this world are less likely than them ever taking even a mild stand -- such as stripping Lieberman of his Chair -- in order to defend some sort of political principle, or to punish ineptitude, or to announce that there are certain lines to the Right that can't be crossed.  They don't do that.  They never have.  And it shouldn't surprise anyone that they won't now.

This reveals much about the Beltway mentality.  Politicians are not only permitted, but actually encouraged, even required, to scorn the Left.  There's even an adoring term for that ("Sister Soljauh") which is almost unanimously considered a truly shrewd and honorable thing to do.  By stark contrast, merely replacing someone in the position of a deeply influential Chairmanship who has strayed way too far to the Right and turned himself into a leading advocate for the most wretched policies is considered horribly divisive.  To do that is a vindictive, partisan purge (on what planet is it improper for a political party to want to empower people who agree, rather than disagree, with its ostensible views?).

These are all lessons that have been learned long ago, re-inforced by one episode after the next.  But it's important to be reminded of them again, and few things will rub everyone's faces in it as vividly as this Lieberman episode will.

John Cole today insisted that Obama shouldn't be criticized for things he hasn't actually done, and that, in particular, anonymous reports about what he "intends" to do should be viewed with much skepticism.  Others have urged patience before judging an Obama administraiton that doesn't even exist yet.  That's all fair enough, and I agree with that entirely, as far as it goes.  In fact, on several occasions over the past few days, I've made that point myself, and specifically wrote:

We ought to wait to see what Obama does before forming conclusions about him and, certainly, before launching all sorts of criticisms at him. He was just elected four day ago and he's not actually the President yet.

But that doesn't mean we should remain passive and quiet on issues that we know are going to be vehemently contested (and I don't think John suggested that).  It isn't as though we don't know what these Democrats are and what they are inclined to do.  We've seen them in action when in the minority and when in the majority, and nobody needs to sit around waiting as though we can't anticipate what's going to happen.

We know there are going to be major wars -- not with Republicans, but among Democrats, and especially the party's leaders -- over things like closing Guantanamo, imposing an absolute ban on torture, restoring habeas corpus, withdrawing from Iraq, reducing executive secrecy and increasing transparency, imposing mild limits and oversight on the surveillance state, returning the Congress to its proper role, and especially investigating prior crimes of high government officials.  More generally, there's going to be immense pressure for Obama to prove that he's "centrist" by making only minor modifications, not major changes, to prevailing Bush policies -- a view that is a principal motivating belief of the Democratic Party.

Yesterday's vague and poorly-sourced Wall St. Journal article reporting that "Obama is unlikely to radically overhaul controversial Bush administration intelligence policies" is not, in my view, evidence of what Obama will do, but it is definitely compelling evidence that people close to him -- those whom he has chosen to be influential -- are pushing him in that direction.  Notably, the article actually describes minor modifications to (as opposed to wholesale overhaul of) Bush's torture policies as the "centrist" and "pragmatic" approach.

It's just a fact that there are all sorts of people close to Obama who have enabled those Bush policies and who are mobilizing now and attempting to ensure that nothing meaningful occurs in these areas.  It simply is noteworthy of comment and cause for concern -- though far from conclusive about what Obama will do -- that Obama's transition chief for intelligence policy, John Brennan, was an ardent supporter of torture and one of the most emphatic advocates of FISA expansions and telecom immunity.  It would be foolish in the extreme to ignore that and to just adopt the attitude that we should all wait quietly with our hands politely folded for the new President to unveil his decisions before deciding that we should speak up or do anything.

Politicians respond to constituencies and pressure.  Constituencies which announce their intention to maintain respectful silence all but ensure that their political principles will be ignored.

The Democrats haven't exactly covered themselves with glory on these matters and they don't exactly inspire any confidence.  That is why this prediction from Howie Klein will almost certainly prove to be true:

This whole thing was a ruse and it wouldn't surprise me if they welcome Holy Joe back into the fold unanimously and the whole caucus sings "For He's The Jolly Good Fellow" on "Fox & Friends" . . . .

It's a secret ballot but I bet there aren't half a dozen votes for tossing him out of his chairmanship.

The Democrats of 2002 and 2007 are the same Democrats of today.  It was inevitable that, sooner or later, they would force everyone to remember that.  It looks like they're going to do it sooner, and in some perverse way, they deserve thanks for that.

It can't be emphasized enough that the election last week was but the first step to changing things meaningfully.  None of that is likely to matter much unless as much energy and effort is now devoted to changing the Democratic Party as was just expended to remove the right-wing from power.

UPDATE:  One can find a thoroughly articulated case against Joe Lieberman, complete with some of his worst transgressions, here.  Those wishing to call Senators to convey your sentiments about this matter can use this tool to do so.