Thrill ride through a "maximum city"

Danny Boyle talks about shooting his Dickensian quiz-show saga "Slumdog Millionaire" on the streets of Mumbai (a podcast and interview). 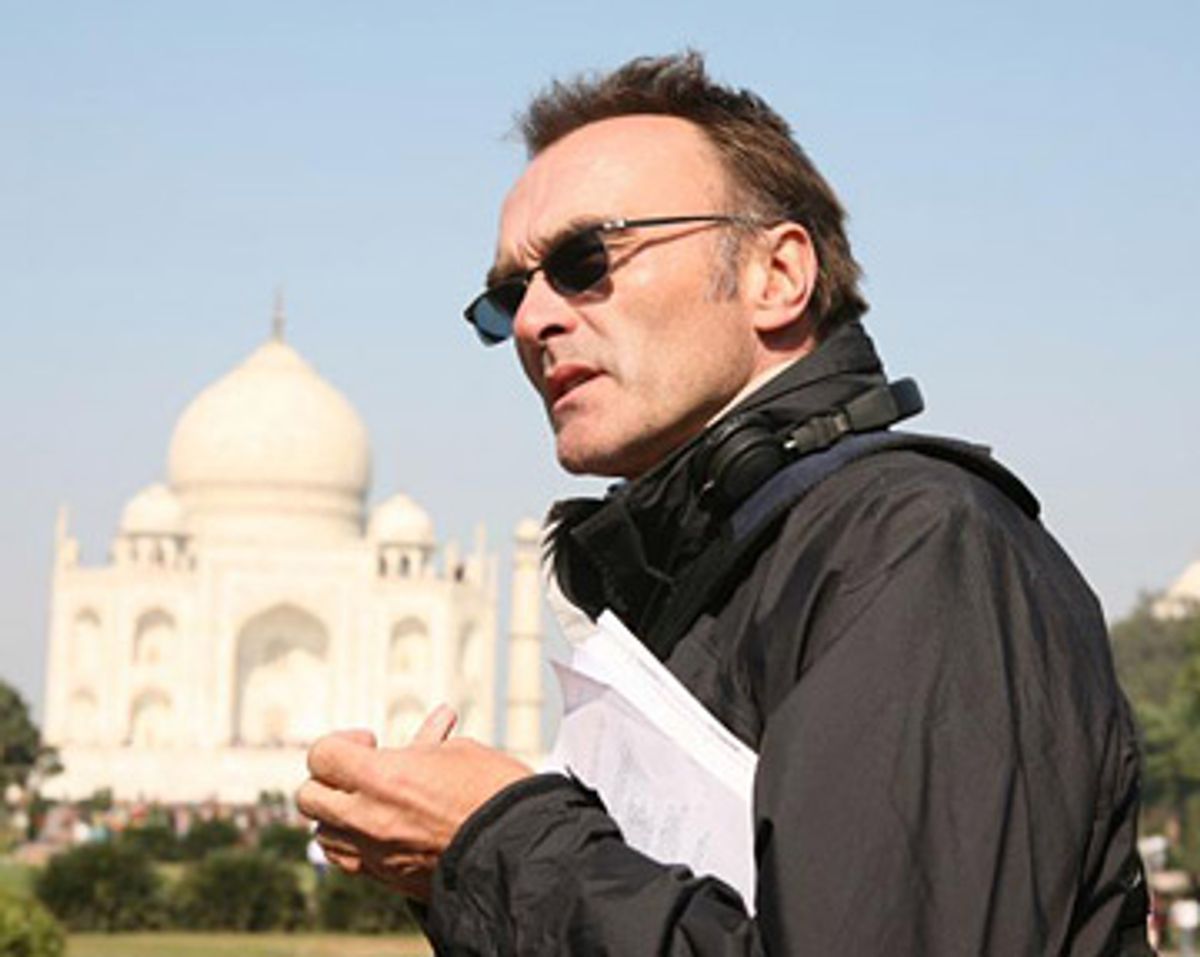 Listen to the interview with Danny Boyle

When Danny Boyle burst on the international film scene with the black-comic thriller "Shallow Grave" in 1995 and the profanity-laced Scottish youth culture saga "Trainspotting" the following year, he seemed at first like a British answer to the young American insurrectionists of the then-burgeoning indie film scene. He wasn't. Always more of a showman and an entertainer than an auteur (he doesn't write his own scripts), Boyle belongs to a much more venerable tradition. For all the fantastical tangents and attention-grabbing cinematography of his films -- who could forget the journey into "the worst toilet in Scotland"? -- he's an old-fashioned tale-spinner with a penny-dreadful novelist's eye for the gory and the grotesque.

Having survived, more or less, his descent into Hollywood mediocrity with "A Life Less Ordinary" and the near-debacle of "The Beach," Boyle launched an intriguing third chapter of his career in this decade, returning to Britain to make the apocalyptic neo-zombie thriller "28 Days Later ..." and the underappreciated, kid-oriented "Millions." Last year, his pessimistic sci-fi parable "Sunshine" (written by three-time collaborator Alex Garland) failed to generate the expected box-office heat, although it has a devoted fan base and a long career ahead as a late-night cult object on video. (A "Trainspotting" sequel set 10 years later, along with a third "28 Days" film, are apparently in the works, and Boyle hopes to direct both.)

Boyle's never been afraid to challenge himself with different genres and unlikely-seeming material, but even by those standards his much-buzzed-over new picture "Slumdog Millionaire" represents a great leap into the unknown. Based on a novel by Indian diplomat-cum-writer Vikas Swarup, it tells the dazzling, rags-to-riches fable of a street orphan from Mumbai (aka Bombay) who breaks the bank on the Indian edition of "Who Wants to Be a Millionaire?" and becomes the focus of suspicion: How does an uneducated "chai wallah," or tea porter, know the answers to all these questions about classical Indian poetry and American political history?

A few minutes after his big win, Jamal (played as an adult by English-born actor Dev Patel) is dragged off the WWTBM set and subjected to brutal interrogation by the Mumbai cops, under the leadership of a jaded and skeptical inspector (Bollywood star Irrfan Khan). After the beatings and electrocutions stop, the inspector gradually warms to this unlikely populist hero; is it just possible he's telling the truth? Screenwriter Simon Beaufoy tells the story both backward and forward as a series of "reveals" about Jamal's life -- with Jamal, his brother Salim and the girl who comes between them each played by three different actors at different ages. Each episode in the film explains how Jamal came to learn the answer to a particular quiz-show question, and the whole movie itself offers the solution to the following question: "Jamal Malik is one question away from winning 20 million rupees. How did he do it? A. He cheated. B. He's lucky. C. He's a genius. D. It is written." At the risk of issuing a spoiler, all four answers contain at least a grain of truth.

Is "Slumdog Millionaire" gimmicky? Sure it is, and in my judgment its dramatic and romantic elements -- as central as Boyle and Beaufoy may believe them -- are incidental. The real star of the film is not a person but a city, the vertiginous, exciting, massively overcrowded "maximum city" of Mumbai. On one hand, this environment of Dickensian, almost hallucinatory contrasts between rich and poor, good and evil feels perfect for Danny Boyle. On the other, Boyle had never even visited India before making the film, and shot almost half of it in Hindi, a language he doesn't understand. Boyle worked with a co-director, Indian documentarian Loveleen Tandan, for the first time, and thrust the fate of the film into the hands of unconventional cinematographer Anthony Dod Mantle (whose work includes "28 Days Later ..." along with such non-Boyle fare as "Dogville" and "The Last King of Scotland").

I met Boyle two weeks ago for a brief conversation at the offices of Fox Searchlight, the film's United States distributor. (Listen to the interview here.) Whatever his reputation for knife-twisting, shock-the-audience moments may be, Boyle in person is a rumpled, scholarly-looking man of 52, who was combining his publicity tour with escorting his teenage daughter on visits to New York art-and-design schools. "Going to India for the first time is a real baptism," he said. "To combine that with doing a film there is pretty ideal for a storyteller. It was an overwhelming experience."

Although "Slumdog Millionaire" is officially based on Swarup's novel "Q&A," Beaufoy and Boyle found inspiration in Suketu Mehta's anthropological-sociological work "Maximum City," which tries to capture the prodigious energy of a city that's "constantly in fast-forward," as Boyle puts it. "There are about two hours at night when Mumbai goes to sleep, except for the dogs. But the rest of the time it's just hurtling along. In terms of energy, I can't imagine a better place to make a film."

Boyle and Mantle shot some test footage on regular 35 mm film, but in Boyle's words, "It didn't feel right." India "is very seductive to cinematography," he said. "It's a place that makes you want to go 'Wow!' and I didn't want to make that kind of film. I wanted to make something more subjective, because I was a visitor, and I didn't want it to feel like a visitor's film. I wanted it to feel like the characters' film, and they were all from Mumbai, and mostly from the slums."

There's a different sort of "wow" factor in "Slumdog Millionaire," one that results from Mantle careering down the narrow streets of Mumbai's shantytowns with a tiny, hand-held digital camera (the SI-2K, for aspiring filmmakers and technophiles) that's so light it can be held at arm's length or up in the air, far from the cameraman's body. In certain scenes, Mantle even used a Canon still camera that shoots video at 12 frames per second, so that he'd look like "a cumbersome tourist from Denmark" rather than a guy making a movie.

Boyle does a wonderful job of capturing the "insidious nature," and the not-so-veiled cruelty, of "Who Wants to Be a Millionaire?" an enormous phenomenon on Indian television. (Indian star Anil Kapoor is deliciously malicious as the show's on-air host.) "They don’t just have TV presenters or personalities doing it there," as in the U.S. or U.K., Boyle observed. "Two men have done it so far. The first guy was Amitabh Bachchan, who is the biggest star in India; it is almost impossible to describe his fame, his level of importance. He presented it originally, and it has since been taken over by a guy called Shahrukh Khan, who is the biggest star in Bollywood at the moment. I also think it is an extraordinarily clever show. You realize how clever it is when you have to learn its techniques -- a long section of the movie takes place on the show.

"The music, especially, is almost impossible to interrupt. You realize that’s one of its powers, that you can’t stop watching it. You don't want to switch it off, because it feels like 'Oh! What's gone wrong?' So it's got that addictive thing, and it's a very useful tool for a film because it allows us to connect with audiences everywhere in the world. And the premise -- that this kid off the street knows all the answers through his life experiences -- is something that I think resonates with people."

As I said to Boyle, it's a cliché for critics to call a social-realist drama with a large cast of characters that depicts class conflict Dickensian, but in this case the shoe fits pretty well. "It's because of the extremes," he said. "There are such extremes in Mumbai. Dickens' source material was really Victorian London, wasn’t it? You think of a burgeoning city that is creating massive wealth on a base of incredible poverty and endurance, stocking this great machine. Mumbai is like that now. But they have this extra thing, I think, in that they don’t separate their extremes. Everything and everyone is involved and included. That is why it is such an exciting place to go as a storyteller. You can push the extremes to both ends, yet you still stay involved in the society. We tend to separate the extremes. The poor -- and there are a lot of them there -- they're included in the society.

"It’s a great place to tell a melodramatic story," he went on. "You can use melodrama in a way that has gone out of fashion for us. It has gone into fantasy movies; our extremes of storytelling have been pushed into superheroes, or Narnia-type things. Those films are very, very popular, because we still want to see that kind of storytelling, but our more regular, more realistic films are more subtle affairs. This setting allows you to be outrageous."

If there's one thing that connects Boyle's disparate body of movies together, it's that they're all over-the-top exercises in style -- or, to put it more positively, they're all distinctive efforts to find an exuberant style that expresses the film's substance. "You feel the connection with the story, and you don’t try to impose a style on it, although certainly my critics would say that that’s what I do," Boyle laughed. "You try to let the style emerge out of the film if you can. I have this theory that your first film is your best film, because you know least about what you’re doing, so there is something fresher, more original about it. You should always try to get back to that if you can, rather than become a technical whiz kid. The style in this film felt dictated by what it felt like to move to Mumbai and live there for eight months.

"In this case, the style is that there is very little control that you can have in Mumbai. There is no precision. You cannot specify or control a bit of life, and then repeat it for the camera. It's there for you to capture if you can do it. But it won’t repeat itself; there is no such thing as continuity. It is a wave and you have to ride it. If you do, if you trust it in the right way, the film will come back to you. It can be quite alarming sometimes, but the city will give it back to you. For me it was like the city was alive."

If you've ever seen a Boyle movie, you will surmise correctly that his portrait of this vibrant metropolis, however comic, kinetic and melodramatic, has its gruesome side. Within the first few minutes of "Slumdog Millionaire," we watch Jamal being extensively tortured, and then we witness the much younger Jamal plunging into a tub of putrid excrement, in his excited quest to get the autograph of aforementioned Bollywood legend Amitabh Bachchan. And I'm not telling you about a later scene, in the sinister orphanage where Jamal and his brother end up, that's so ghoulish I never want to think about it again.

"Those things are going on the whole time in India," Boyle said when I brought up the film's more disturbing elements. "You can’t just show one side of it. You have to be honest about some of the horrific things you see there, some of the suffering that goes on. But I think it's got a happy ending, if not a Hollywood happy ending. The spirit of the city is overwhelming in the end, and it is a positive spirit. I hope that's reflected in the film, without stinting on any of the violence that exists there."

Beyond The Multiplex India Movies