"Top Chef" moves to New York City for its fifth season, and the battle begins in a brutal frenzy of slicing and dicing! 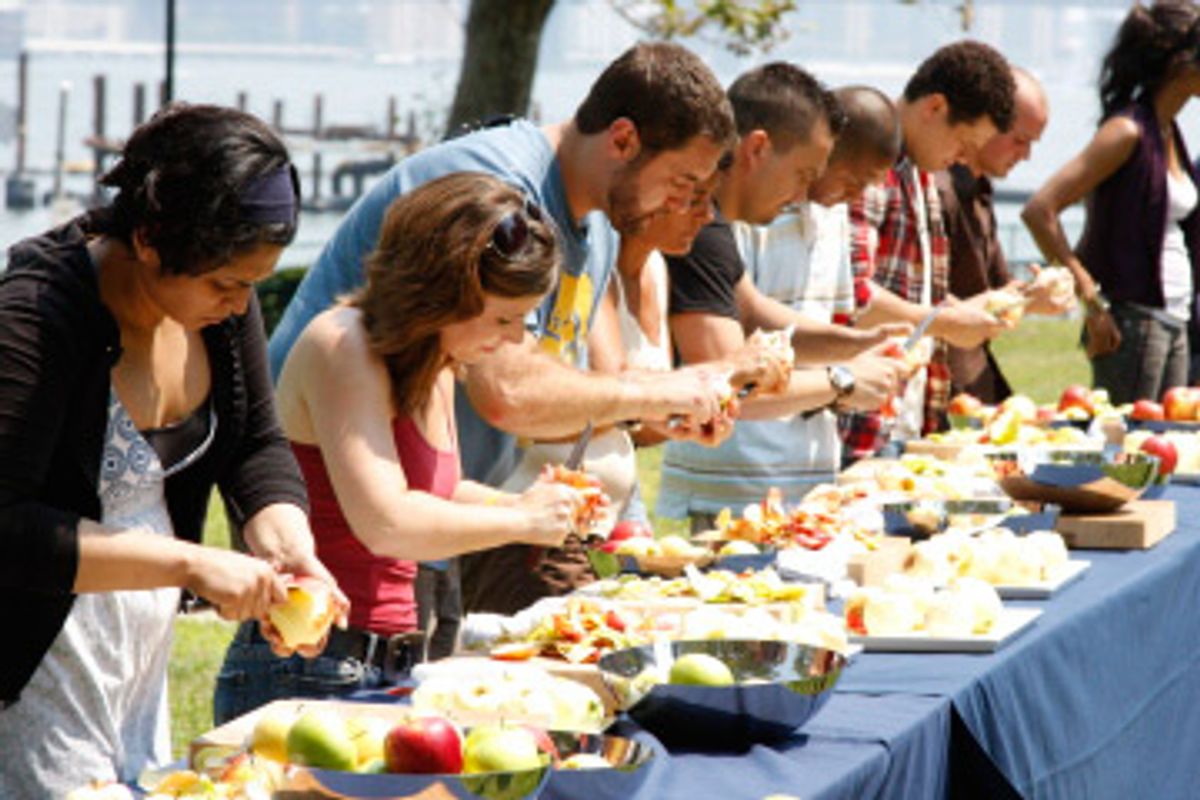 The knives are coming out once again, and the pressure is on. Before they even see the inside of the "Top Chef" kitchen, the new cheftestants' faces reveal who's about to get kicked to the curb. Who looks nervous? Who looks jittery and insecure? Who tells the camera, flat out, "I'm thinking I might get eliminated"?

And who sits back, arms folded, with a self-satisfied, almost bored look on his face? You can bet that smug bastard is going to be in the top five contestants when we pull into the final stretch.

In an attempt to reveal both early nerves and early swagger, Chef Tom Colicchio kicks off the fifth season of Bravo's "Top Chef" (premieres 9 p.m. Wednesday, Nov. 12) with a particularly brutal Quickfire Challenge (that will also result in one cheftestant being eliminated): Peel 15 apples using a paring knife! (Good luck not cutting your fingers off, kids.) The first group to finish without hacking up the apples is safe, and the bottom group must move on to a second, even more harrowing challenge.

Launching the whole season with an apple-peeling challenge feels a little uncreative and arbitrary. Do the judges really care about knife skills so much that they'd eliminate someone based on them in the first few minutes of the show? On the other hand, don't knife skills reflect, in part, how well a chef will handle the pressures of a chaotic kitchen?

Sure enough, the cockiest cheftestant finishes his apples with a snicker and a shrug, like he can't help it that he's surrounded by a herd of intolerable amateurs. This is exactly the attitude that we've seen in other winners, from Harold Dieterle to Hung Huynh. I'm willing to bet good money that this guy (to remain unnamed) will end up in the final five.

In contrast, the same cheftestants shown tripping over their own self-doubting words as the challenge began are struggling to finish their apples, and wind up moving on to the next round: Dice those apples into perfect, tiny little cubes -- or, for the trained culinary artists among you, brunoise them! And the third round? Make a quick entree that incorporates the apples you just diced. Well, at least even the worst slicers and dicers can still save their necks with a little smart cooking -- if they can keep their wits about them, that is.

But then, tackling frayed nerves is as big a part of "Top Chef" as winning the judges over with your blackened halibut. Despite having followed "Project Runway" into the realm of professional reality competitions, and despite being followed, in turn, by an unruly mess of similar shows on Bravo, from "Sheer Genius" to "Top Design," "Top Chef" distinguishes itself as the best of its class precisely because its challenges are at once unforgiving, entertaining to watch and surprisingly predictive of future success. Even when challenges feel a little random -- "Use these canned foods to make a tasty lunch menu item!" or "Make a high-end entree using wild boar meat and bing cherries!" -- the smart choices and good taste of the cheftestants always seem to shine through.

The judges have become very good at recognizing skilled chefs, at times wisely overlooking a lackluster dish from promising talents if they feel they're destined to cook well over the long haul. That's a good thing: If you've ever seen an obviously skilled contestant axed for one limp performance on a show, you know how frustrating it can be when judges refuse to look at the big picture and weigh past successes against one current failure. Thanks to these smart calls by the judges, the whole show feels far less arbitrary than its professional reality competition cousins, and its finales typically include individuals who are clearly the most talented in the group.

Of course, producers also try to get enough colorful personalities into the mix that there'll be some conflict and bitter accusations flying around in the Glad Wrap Torture Storeroom along the way. This season there are certainly enough hotheads to add plenty of salt to this stew: Italian Fabio and Finn Stefan are already bonding over their mutual snobbery when it comes to American notions of what constitutes fine cuisine. "A vinaigrette is not an emulsion," Stefan snaps at New Yorker Danny, chiding the pretentious, empty terms coined by bourgeois eateries. "A vinaigrette is a vinaigrette."

Meanwhile Carla, a caterer from D.C., has already helpfully indicated that she's crazy, and Patrick, Richard and Jamie have proclaimed an informal gay alliance they call "Team Rainbow."

The first Elimination Challenge is both lively and difficult: Cheftestants are asked to create dishes inspired by various ethnic neighborhoods in New York. The high quality of the resulting Asian, Indian and Jamaican dishes leaves Colicchio remarking to the rest of the judges, "If this is the kind of food we're going to get all season long, we're in for a nice ride." He also tells the cheftestants, " It's going to be very competitive."

Skilled chefs, great dishes, a few doomed nervous Nellies and lots of petty squabbles ahead? What more could a loyal "Top Chef" fan ask for? After years of perfecting their recipe, the producers of "Top Chef" have turned this basic vinaigrette of a reality competition into ... an emulsion!