Hispanic voters played a pivotal role in this election. If current trends continue, they may turn other parts of the country as blue as they just turned New Mexico. 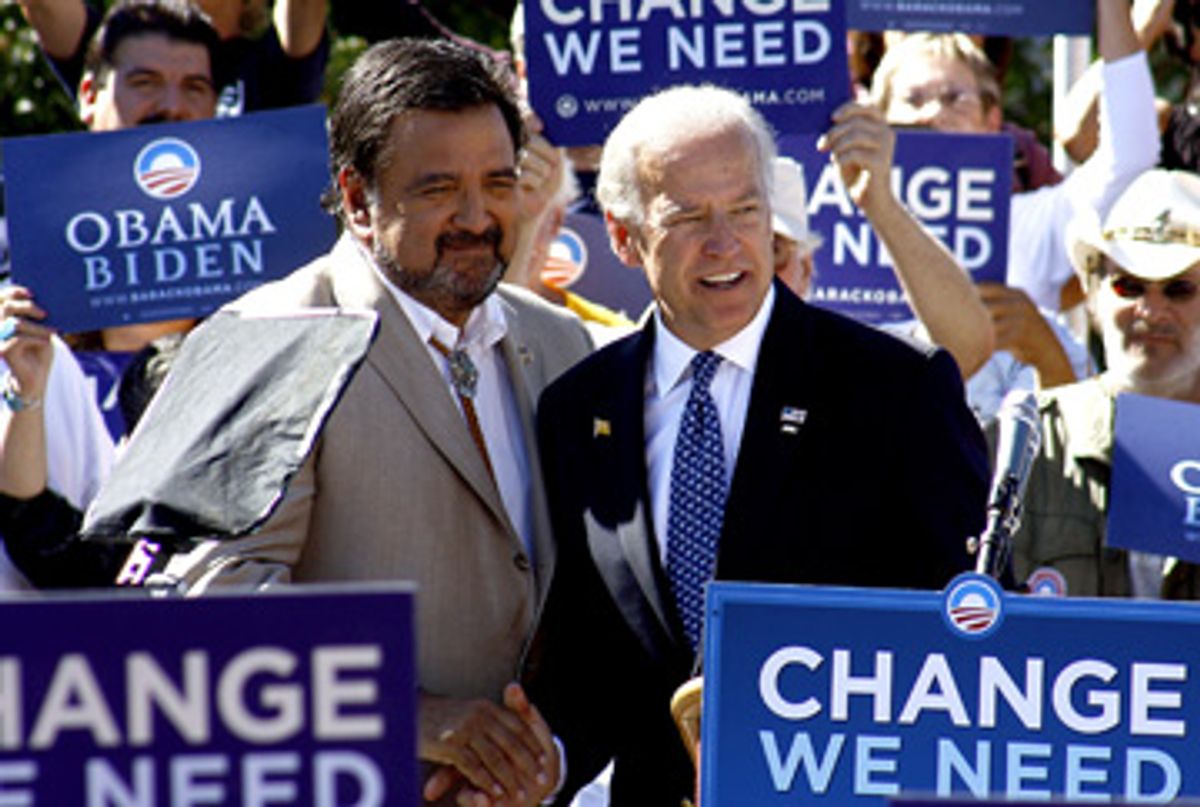 Over the past eight years, as much of the country went firmly into either the red corner or the blue corner, New Mexico remained doggedly purple. In 2000, two of the state's three U.S. representatives were Republicans, as were its governor and one of its senators. But both houses of the state Legislature were run by Democrats, and Al Gore squeaked past George W. Bush in November, with a margin of fewer than 400 votes. Four years later, Democrat Bill Richardson won the governorship, but Bush captured New Mexico's five electoral votes, again by a small margin.

This year New Mexico didn't deliver any mixed messages. On Nov. 4, Democrats dominated at every level. Barack Obama beat John McCain, Tom Udall took an open Senate seat that had been Republican, and Martin Heinrich and Harry Teague took two formerly Republican House seats. And every one of them won in a landslide, with margins of 10 percent or more; Obama prevailed by 15 points, Udall by 22. New Mexico is now bright blue, with Democrats in nearly every elected statewide office, control of the state House and Senate, and an all Democratic congressional delegation.

What happened? The long-promised Latino realignment may have become reality. Coveted by Karl Rove, courted by George W. Bush, the fastest-growing sector of the American electorate stampeded toward the Democrats this November. New Mexico is only the most striking symbol of a nationwide trend that helped flip as many as seven states and 85 electoral votes into Obama's column. Latinos formed their largest share ever of the national electorate, 9 percent, and their numbers are poised to increase in every election to come. They also voted by their largest margin ever for the Democrats, 67 to 31 percent. If that pattern continues, the GOP is doomed to 40 years of wandering in a desert.

In some of the purple and red states conquered by Obama last week, the degree to which Hispanic votes determined the outcome can be debated. Not in New Mexico. The bluing of New Mexico can be attributed almost solely to a change in the behavior of one demographic bloc. "If you look at the numbers, you'd have to say that it is because of the Latino vote," Cuauhtemoc "Temo" Figueroa, the Obama campaign's Latino vote director, says. "When you talk about New Mexico politics, it's not an afterthought, it's not an addendum, it is the discussion."

In 2004, according to exit polls, Hispanics made up 32 percent of the electorate there, and broke 56-44 for John Kerry over Bush. But Bush, buoyed by the white vote, managed to win by 1 percentage point overall.

By 2008, the Hispanic share of the electorate had increased by a third, to 41 percent, and voters in the demographic were much more Democratic, going 69-30 for Obama over McCain. That change by itself can account for almost all of Obama's advantage in the state, especially since the white vote stayed essentially the same (though whites' share of the electorate was down by 7 percentage points) and the African-American population is small. This shift can also account for most of Udall's margin in his Senate race, and for the Democrats' wins in the two House races. It also means that the Hispanic share of the New Mexico electorate finally approaches the Hispanic share of the state population, which is 42 percent. (And this despite dire warnings from some quarters about widespread vote suppression in New Mexico.)

Experts who spoke to Salon also credited the Hispanic vote with delivering Colorado and Nevada to Obama. Colorado added a Democratic senator and a Democratic representative this cycle, while Nevada added a House seat. In both states, the Latino share of the electorate grew 50 percent or more from 2004 to 2008, from 10 percent to 15 percent in Nevada and from 8 to 13 percent in Colorado. Nevada's Hispanic margins for Obama were especially lopsided, at 76 to 24, according to exit polls.

Fernand Amandi, executive vice president of Bendixen & Associates, a firm known for its polling of Hispanics, says that even Obama's wins in Indiana, North Carolina and Virginia should be credited to this demographic cohort. Figueroa doesn't wholly disagree -- he says that the Hispanic vote was "pivotal" in Indiana and "pivotal and determinative" in Virginia.

But the numbers were most striking in Florida, because of the history and unique nature of Florida's Latino electorate. For years, the state's Hispanic community was dominated by Cuban exiles, the devout Republicans crucial to the GOP's hold on the state's rich trove of electoral votes. This year, for the first time since such things began to be measured in the 1980s, Florida's Hispanics voted for a Democrat for president, and in large numbers too. In 2004, they went for Bush 56-44. This year, the result was almost the exact opposite; Obama took the community's vote, 57-42, and won the state.

Amandi says this change was the "largest swing of any demographic group in the country." He attributes it to the "rise of the non-Cuban Hispanic vote," an influx of people from other countries moving to Florida. (The Obama campaign made a special effort in the Orlando area, the center of the state's Puerto Rican community, a reliably Democratic bloc.) And as the exile generation ages and dies, the Cuban community is becoming less Republican too, Amandi says. Both trends bode poorly for the GOP's prospects in a swing state with 27 electoral votes.

None of this means that Democrats can take the Hispanic vote for granted. In fact, the party's success this year comes in large part because it began a concerted effort focusing on Hispanics. Simon Rosenberg, the president of the New Democrat Network, which has been studying the changing electorate and especially the impact of the Hispanic vote, says, "Increased turnout happened because Democrats finally woke up to this Hispanic opportunity ... It's really only in the last few years that Democrats woke up to this new reality. If you're a Hispanic voter, particularly in the Southwest or the West, the Democratic Party sort of woke up and started to speak to you."

Figueroa, too, credits the success to organization. "I think we've learned from previous elections and we've learned from this election now that if you spend the resources and you pay attention to the community, you can win," he says. "The West in general is ripe territory for Democrats, and it's an area where you see not only the party structure investing huge amounts of resources in the West but progressive organizations investing a huge amount of time and money."

Assuming Democrats can keep up this momentum, a couple of big prizes await: Arizona and, yes, perhaps even Texas. The experts with whom Salon spoke were all but unanimous in saying that Arizona could be in play very soon, and that Texas could become a battleground within the next eight years and perhaps even by 2010.

"Whether in four years or whether in eight years, I do see potential there in Texas, because of just the sheer magnitude of the numbers, the Hispanic voters," Figueroa says. "But I think what has to happen in Texas is they -- 'they' meaning the party structure -- has to show they can put together an operation that can win. And 2010 would be a great example to show where they're at."

If that happens, if Democrats can count on Hispanics to deliver the nine states, including those two, where their population is at or exceeds the national average, then the party would have a formidable advantage in every presidential election. Combined, those states represent 212 Electoral College votes. Add the dependably blue Northeast, and the Dems win the White House every time.

But just as Democrats can't take the Latino vote for granted, so can they not depend on the opposition to keep screwing up. For all the abuse heaped on him, Karl Rove saw the Hispanic juggernaut coming and tried to get the GOP ready. Rove had visions of appealing to Hispanics and thereby ensuring a political future for his party. And it almost worked, but then his fellow Republicans went nativist and mucked it all up.

"If the party doesn't embrace the kind of change that is out there in the way that our country's demographics are changing... they're going to relegate themselves to a permanent minority," says Dan Gurley, the Republican National Committee's field director during the 2004 election. "I think Karl Rove is absolutely right when it comes to where the party needs to be with the Hispanic community. I think he totally gets it, and the unfortunate thing is that a lot of people, a lot of the base of the party, don't."

There's an old political cliché: Demography is destiny. The Latino share of the national electorate has increased a full percentage point in each of the last two national elections. It will only increase more quickly in the coming years, since so much of the Hispanic population, 46 million strong, consists of the U.S.-born children of nonvoting immigrants. The country's changing demographics left the GOP with a choice -- prevent Hispanics from forming a reliably Democratic bloc or face what could be decades of minority party status. For the moment, the Republican Party has chosen poorly. Now it's time to face the consequences.