Will it be Chuck Hagel, or even Hillary Clinton, for secretary of state? Will Bob Gates stay at the Pentagon? Obama's national security team remains mostly top secret. 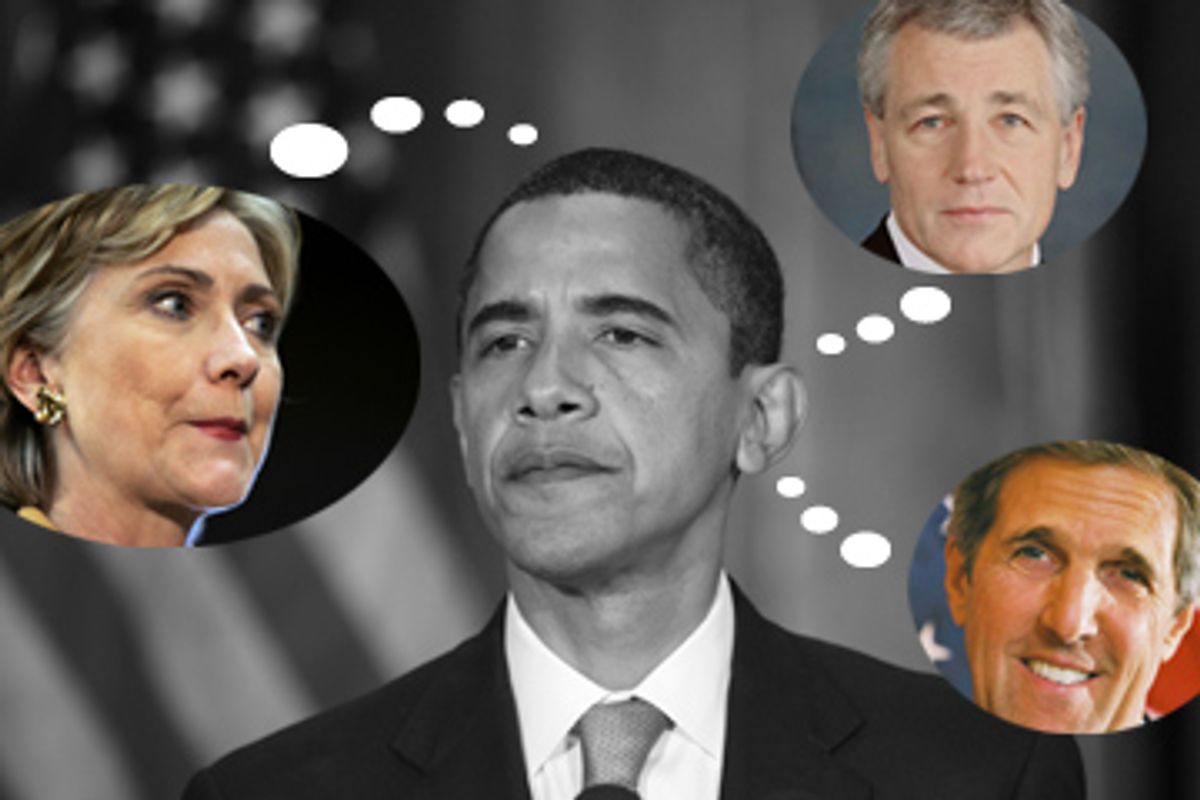 For those who dream about a high-level position in the Obama administration, these are the times that try their souls and test their psyches too. As Michael Mandelbaum, professor of American foreign policy at Johns Hopkins School of Advanced International Studies, puts it archly, "If you could tap and harness all the nervous anxiety felt by all the Democratic foreign-policy wannabes, America would achieve energy independence."

If the fall campaign brought with it the risk of drowning in a tidal wave of polling data, the occupational hazard during the transition period between presidents is dying from thirst in a parched landscape devoid of any reliable information. Even the ballyhooed release Wednesday of the identities of Obama's major transition team leaders in Washington may have been a diversion from the real drama in Chicago. As one veteran of the Clinton White House says, "The only transition that matters is in Barack Obama's living room."

What we do know so far is that a Clinton pedigree appears to be a major asset. Not only did Obama's incoming chief of staff, Rahm Emanuel, make his bones in the Clinton White House, but also all six transition team leaders for the departments of State, Defense and Treasury served in the prior Democratic administration. Bill Galston, who was a senior domestic advisor to Clinton, points out, "One of the advantages that Obama has that Clinton did not have is a usable past. The Clinton transition went too far in excluding people with Jimmy Carter experience."

Nowhere do things currently seem murkier than in matching names with top jobs in the foreign policy and national security arenas. The rumored front-runners for secretary of state have been two senators who have served with Obama and Joe Biden on the Foreign Relations Committee: almost-2004-president John Kerry and Chuck Hagel of Nebraska, the Republican critic of the Iraq war. Kerry probably would have tapped Biden as his nominee for Foggy Bottom -- and now the vice-president-elect presumably is trying to return the favor.

As for Hagel, Obama has long promised to give Republicans a prominent role on his foreign-policy team, saying in a Salon interview a year ago, "I think it is important for an administration to have strong, robust debates as long as everybody is on the same team ... That's part of the reason why I want some traditional Republicans to be involved in this process." Hagel is certainly actively auditioning for the role of the Democrats' favorite Republican, a position on the ideological grid once held by John McCain. It is not coincidental that Hagel has scheduled a major policy address in Washington next Tuesday titled, in slightly heavy-handed fashion, "Toward a Bi-Partisan Foreign Policy."

Confusing everything is the persistent talk about retaining Secretary of Defense Robert Gates, virtually the only Bush Cabinet member likely to emerge from the current administration with his reputation intact. If Gates stays even for an interim period, it is hard to imagine that Obama would also give a major post to a Republican like Hagel unless the president-elect has a very idiosyncratic definition of "change." But there are hints that Gates would only stay on his terms, which include the right to choose his deputies at the Pentagon. There is also the perplexing timing of a speech that Gates delivered in late October (at a time when all the portents pointed to an Obama presidency) calling for a new generation of nuclear weapons. If Gates wanted to ingratiate himself with the incoming Democrats, preaching the gospel of new and better nukes seems a strange way to go about it.

Richard Danzig, who was secretary of the Navy under Clinton and an ardent Obama supporter early in the race, is the most likely Democratic alternative to Gates. In fact, the Army Times reported Thursday that "high-level Defense officials" are preparing to hand over the keys to the Pentagon to Danzig. At times like this, specialty publications like the Army Times sometimes have better sources in their subject area than the major newspapers and broadcast networks.

Transition, of course, would not be transition without the Hillary Clinton rumor of the week. Steve Clemons, who directs the American strategy program at the New American Foundation, says there are hints that Clinton may be under consideration for the secretary of state post, stressing that she certainly passes the experience threshold. "It would be an unbelievably brilliant move by Obama if she would do it," he says. The Washington Post's transition column picked up the same vibrations Thursday and floated an item.

While this remains a long shot at best, tapping Clinton to replace Rice would do more than simply revive interest in Dick Morris' off-the-wall 2005 book, "Condi vs. Hillary: The Next Great Presidential Race." If Obama were somehow to give the top Cabinet post to his rival for the 2008 Democratic nomination, it would be, well, Lincolnesque. In assembling a Cabinet, Lincoln practiced a politics of "malice towards none" by naming William Seward, once the favorite for the 1860 Republican nomination, as his secretary of state.

But, if history is any gauge, these Washington games of telephone invariably end up with the wrong number in picking a Cabinet. That is why it would be folly to completely dismiss other candidates for secretary of state such as New Mexico Gov. Bill Richardson (the Democratic Party's version of "always a bridesmaid") and former Senate Majority Leader Tom Daschle (who was the only non-Chicagoan seriously considered for White House chief of staff).

Even when the press has the right names (after the appointments), it is easy to jump to the wrong conclusions about the power realities within the new administration. In mid-December 2000, the New York Times editorial page finally found something to like about the new team in Washington: "President-elect George W. Bush's intention to name Colin Powell as secretary of state and Condoleezza Rice as national security adviser instantly enhances his coming administration. They are seasoned, thoughtful practitioners who will bring international stature and extensive knowledge to the Bush administration."

Transitions are a tricky business even for Democrats. Bill Clinton misfired with a series of initial picks, from the disorganized Les Aspin at the Pentagon to the out-of-touch Lloyd Bentsen at Treasury to the inexperienced Mack McLarty as White House chief of staff. That is why the mantra of transition reporting -- as beguiling as the name game invariably is -- should be "trust but verify."