The outgoing president wants to spur Democratic infighting by attaching an agreement with Colombia to the economic stimulus package. Obama should say, "no deal." 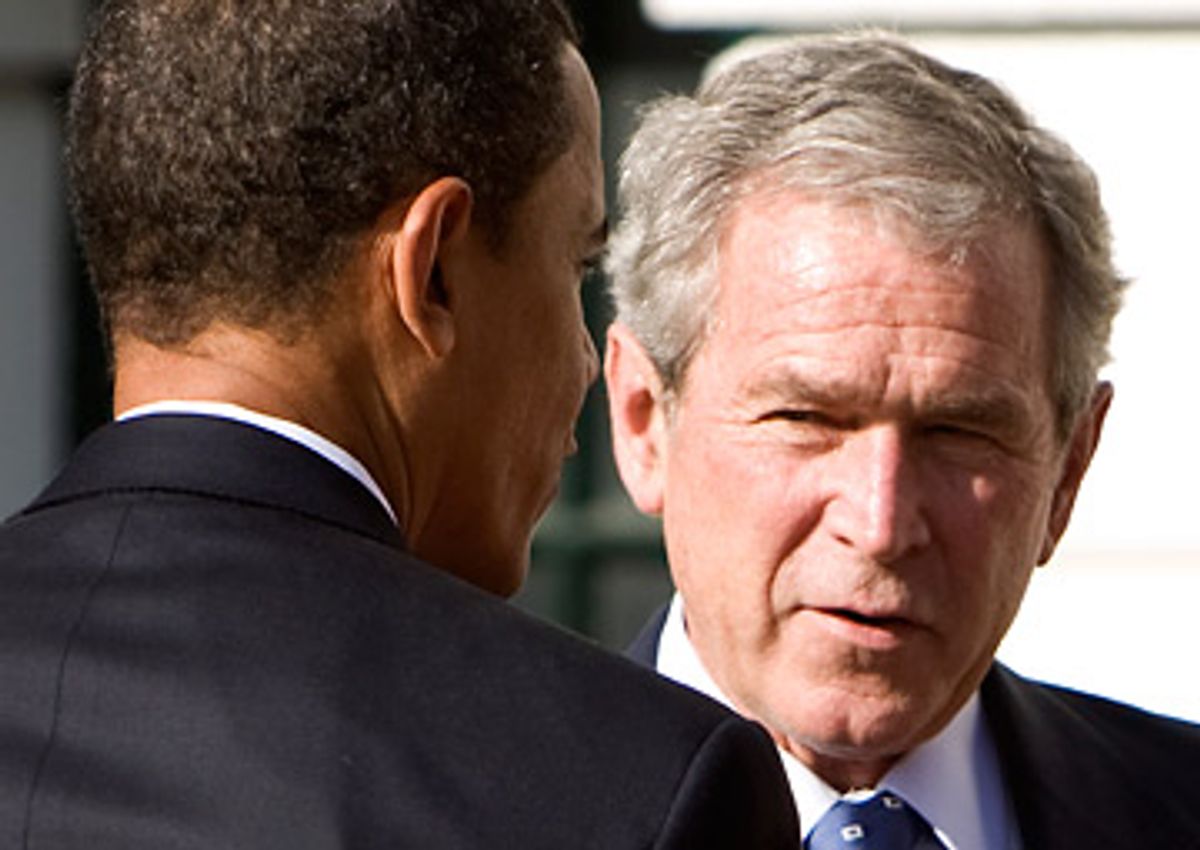 It wouldn't be the George W. Bush we all know if our shamed president didn't spend his remaining White House days in a final fit of polarization.

That's what Bush's moves this week are clearly about: dividing, not uniting. The New York Times reported that during his first meeting with Barack Obama, the outgoing president suggested he might support the Democrats' economic stimulus package and aid to struggling automakers if party leaders "drop their opposition to a free-trade agreement with Colombia." While Bush later denied an overt quid pro quo, one was obviously implied.

Strange behavior? Yes and no.

Bush is the Texas hold 'em addict who raised on the largest tax cuts in contemporary history, re-raised on two wars and went all-in with an attempt to privatize Social Security. So yes, from a brinkmanship standpoint, it seems bizarre that in exchange for a massive legislative effort to right the entire economy, the cowboy president may insist on a tiny trade deal that -- at best -- promises a boost of "less than seven-hundredths of one percent to U.S. gross domestic product," according to the Brookings Institution.

But, then, Bush is the protégé of Karl Rove and the son of George H.W. Bush. So no, his Colombia demand isn't weird at all -- nor is it as small a wager as it appears.

Bush understands what happened in 1993 when his father left an almost-finished North American Free Trade Agreement (NAFTA) in the lap of Bill Clinton's incoming administration. He knows that business interests subsequently pressured Clinton into joining with Republicans to pass the pact over the opposition of Clinton's own party. His Rove-trained mind gets what the Nation's John Nichols reported: that the payout came with a 1994 election whose NAFTA taint delivered "a dramatic drop in turnout among members of union households," decreased "Democratic support in traditional areas of strength" -- and thus birthed the Republican Congress.

Bush wants to replicate this three-card monte -- and the Colombia trade pact is his ace in the hole.

The deal would reward a right-wing Colombian regime under investigation for links to paramilitary gangs, drug cartels and anti-union brutality. Like NAFTA, it includes few labor protections, meaning it will enrich Bush's corporate donors by forcing Americans into a wage-cutting competition with low-paid foreign workers. And, most important to Bush's legacy, the pact could bust the Democrats before they ever have a chance to unify.

NAFTA proved that trade is the most divisive issue inside the Democratic Party. On one side is the party's Wall Street wing, which supports free trade. On the other side is its progressive wing, which wants our trade policies reformed. Lately, the latter has increased its clout. As globalization became a major campaign theme in the last two elections, the watchdog group Public Citizen reports that free-trade critics replaced free-trade proponents in 69 House and Senate races. These new populists, along with more senior incumbent progressive Democrats, constitute a powerful new voting bloc promising to reject deals like the Colombia agreement and protect labor and human rights.

Therefore, if Bush successfully uses the economic emergency to hustle a faction of Wall Street Democrats into supporting the deal, he will have potentially engineered 1994 redux: Democratic infighting, a demoralized progressive base, and these newly elected fair-trade Democrats humiliated — and thus electorally endangered — by their own party's standard bearers.

Certainly, with the president betting the economy on the Colombia deal, this is a difficult, high-stakes situation for Obama. But amid all the conflicting opinions he's hearing, he has the sound advice of country music's great political sage Kenny Rogers, who counsels that gambling greatness means knowing "when to walk away."