I can has cheezburger ... and pathos?

The lolcats, the Internet's most famous felines, may be hilarious. But in their yearning, I see nothing less than the tragedy of the human condition. 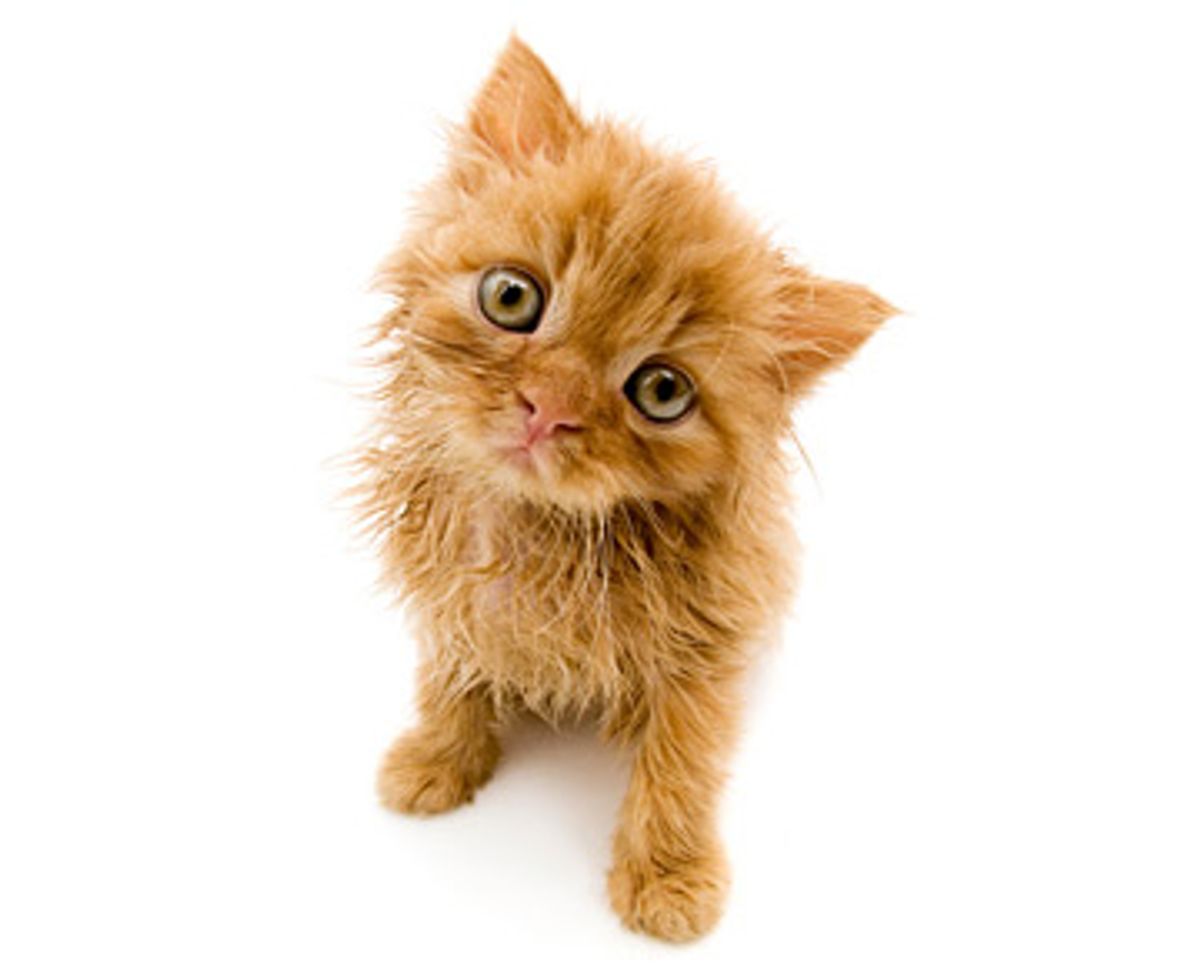 The first time I saw a lolcat -- those funny images of felines with grammatically questionable captions -- it took me a minute to understand the joke.

"What's with the misspellings?" I wrote the friend who'd IM'd me the link. "Cats are dumb and can't spell?"

"Pretty much," my friend replied.

"And they have bad grammar?" I wrote, still processing the idea.

I did. In fact, I couldn't stop laughing.

By now, even the most casual observers of the Internet are aware that lolcats have become a certifiable Internet phenomenon. Their flagship site, Icanhascheezburger.com, is one of Web 2.0's big success stories -- on track to top a billion page views this year -- and its content is entirely user-generated. Readers upload over 5,000 homegrown submissions every day, of which six or eight are posted on the site. And in October, the lolcats got their very own coffee table book, "I Can Has Cheezburger,"

I love lolcats. I'm not ashamed to admit it. Sure, they've been around for almost two years -- but the site posts fresh new jokes every day, and I'm never disappointed.

But what draws me to the site even more than what's funny is what's sad. My favorite lolcats are not the rapscallions pining for "cheezburgers" or helpfully upgrading your RAM, but rather a brilliant and underappreciated subgenre of sad lolcats -- tragic figures of grief, yearning and unrequited love. But I'll come back to that.

Lolcats are different in that the characters they portray -- and yes, they are portraying characters -- don't represent cats at all. They're a completely different kind of beast, mischievous (if incompetent) rascals, scheming for cheeseburgers and stopping at nothing to get them.

Take the lolcat that started it all, created by a Hawaiian blogger named Eric Nakagawa, who posted it in January 2007. The image features a cat with a crazed look of pure animal hunger, its eyes maniacal with desire, asking, "I can has cheezburger?" Underneath is the comment: "The Internet's piece de resistance, the website's raison d'etre."

This ur-lolcat created such a sensation that Nakagawa turned it into a blog, spawning not only the eponymous Web site but also a whole mythology. The cheezburger has become the Philosopher's Stone of the lolcats mythos -- the most prized, cherished and elusive object in their universe. It is for this reason that, when a tiny kitten being sniffed by a Great Dane 20 times its size needs a quick escape, it says, "I iz not cheezburger, kthxbai." It is for this reason that when a user finds a photo of a cat sitting by the window with its paws in its lap, the caption reads, "I iz waitin for cheezburger man. Does you have a money?"

The Web is now spawning a wave of next-generation lolcats sites that take the lolcats concept and run with it. There's lolpresident, loldogs, and even lolhan, a site devoted to Lindsay Lohan that includes such classics as "I layded you an egg but I'z hidin it."

Thus, Genesis 1:1 is rendered as, "Oh hai! In teh beginnin Ceiling Cat maded teh skiez an da Urfs." (Satan, of course, is represented by a black cat called Basement Cat.)

This is all funny stuff. But I submit that the true genius of lolcats lies in their tragedy.

In one classic example, one cat is crying, and another is hugging it and saying, "Don't crai. We'll get cheezburger someday." It's sweet and poignant and wistful all at the same time. Life can be hard, it says, and we don't always get what we want, but even as we long for things we may never have, we draw succor from the reassurances of those we love. Sure, it's ridiculous that what the cat is yearning for is a cheeseburger. But the cheeseburger is not really a cheeseburger -- it's a symbol.

Here's another: A brown and black calico looks out the window of his apartment only to notice a beautiful white female on the balcony across the way. His heart quickens, in the scenario I imagine, then he swallows hard and quickly looks away, unable to muster the courage to speak to her. The caption: "Evry dayz, 3 o'clockz ... Mebe one day I sez meow to her." Who among us hasn't felt that longing and regret? Who among us hasn't passed an attractive stranger in the supermarket or on the street, only to kick ourselves afterward for letting the opportunity slip between our fingers?

In fact, there's a whole species of the genus Lol devoted to the tragic: the "lolwalruses," or "lolruses." If lolcats are incorrigible little rascals, lolruses are romantic heroes, born to suffer, whose lives are dominated by the exquisite misery of love lost. The lolrus meme originated with a single diptych. The first panel displays the walrus lovingly cradling a bucket, a look of absurd delight on its face. In the second panel, a trainer is ripping the bucket away as the walrus looks on in helpless panic. And the saga of the lolrus and its beloved bucket takes off from there.

Clearly, I'm moved by these pictures. But what is it about the lolruses and the sad lolcats that is so gut-wrenching?

To try to understand, I turned to Bob Mankoff, the New Yorker's brilliant cartoon editor. After all, a lolcat is just an image with a caption -- in other words, a cartoon.

The first reason sad lolcats can be so powerful, Mankoff suggested, is their comedic structure. The meaning of a lolcat is rarely straightforward -- rather, there's a punch line of sorts, a layer of meaning you have to think about for a moment in order to grasp. So the punch line, the same thing that makes the lolcat funny, is what makes it sad. You could call these tragic strips.

The best example I know of this kind of cartoon is one by Charles Addams that depicts a male and female unicorn standing on a sliver of land in the rain as Noah's Ark sails away.  Having arrived too late, all the unicorns can do is watch the ark recede into the distance as the waters rise around them. The image conveys so much regret -- the idea that we were so close, that we could still have these magical creatures among us today if only we'd been more patient. It's the sadness of missed opportunities.

But the unicorn cartoon still has the structure of a joke. You have to "get" the extra layer of meaning, grasping that the unicorns aren't, say, marooned on a desert island, but standing on a mountaintop as the floodwaters surge around them. "It's not just sad, because something that's just sad -- someone being killed, run over -- we know what that feels like," says Mankoff. "Here, you're using a mechanism that's usually involved in humor: the cleverness of getting it."

A second major factor in the poignancy of the sad lolcat, I would argue, is the use of animals. The comic form is generally a prophylaxis against sentimentality. By articulating profound feelings through cats and marine mammals speaking garbled English, we're able to shroud genuine emotions in pseudo-irony -- which means those animals can evoke deeper emotions without fear of mockery or cheapness.

Animals are also childlike and helpless. When we see a cute little dog in a New Yorker cartoon, it triggers the responses we have toward children. Cartoon dogs are childlike creatures: They're cute and have big heads, big eyes, exaggerated, childlike features.

Of course, to express human emotions, you need an expressive face. "It's cats, not scorpions," says Mankoff. "It's cats, not rats. If somehow on YouTube there was a rat flushing the toilet over and over again, we wouldn't think it's too interesting."

It is because animals are able to move us so powerfully that many tragic strips use animals instead of people. In one New Yorker cartoon, a dog is lying on the couch, while another dog, his therapist, sits in a chair and takes notes. "They moved my bowl," says the dog on the couch. The message isn't really about the moving of bowls at all, but about our problems in life, our frustrations, our sense of being victims.

"The animals aren't animals at all, they're stand-ins," explains Mankoff. "They're hybrids we use as devices to talk about the feelings we can't name in other ways."

The same is true of the sad lolcats and the lolruses. Consider LolSecretz. It's like PostSecret.com -- which publishes anonymous bathroom-wall-variety confessions ("I had gay sex at church camp," "I only love two of my children," etc.) -- except it uses images of cats. In one, a black cat says, "I just wishes I wuz white." In a third, a world-weary cat with dead eyes gazes longingly at a knife, saying, "i killed mahself 6 timez ... 3 to go."

And that's the real answer to the puzzle. We've gone from cats as cats, to cats as scheming rascals, to cats as human beings. The sad lolcats represent people. We have seen the lolcats, and they are us.

Jay Dixit is a freelance writer living in New York.