Interview with a vampire's director 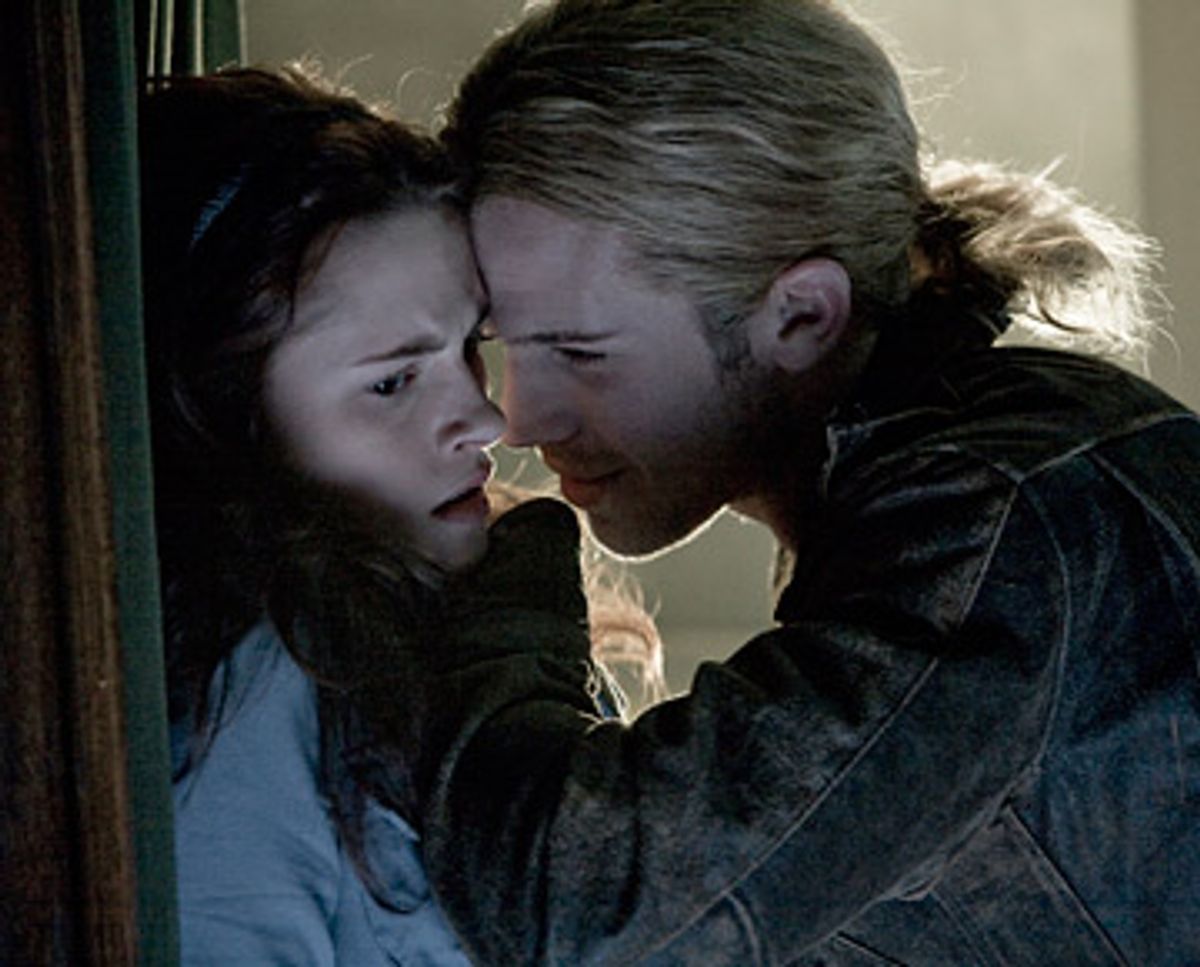 Catherine Hardwicke hardly seems like somebody you'd expect to direct a blockbuster vampire movie. The soft-spoken Texan is best known for gritty, intimate and marginally commercial films, like "Thirteen," about a troubled California teenager, and "Lords of Dogtown," about a skateboarding posse. She's never directed a film based on fictional characters, let alone one with elaborate fight sequences. But this Friday, her latest film, "Twilight" -- based on the first book of the highly popular series by Stephenie Meyer -- will open in theaters across the country to the breathless anticipation of a large contingent of America's teenage girls.

"Twilight" tells the story of Bella Swan, a clumsy 17-year-old who moves to a rainy Washington town to live with her father. Once there, she catches the eye of Edward Cullen, the best-looking guy in her new high school, and the two engage in a whirlwind romance. As it turns out, Edward is not only sweet, charming and attentive but also, somewhat awkwardly, an immortal vampire with a disquieting thirst for blood. The resulting tension, between his murderous instincts and his love for Bella, is what gives the story its drama.

When Hardwicke first read the script, only two novels had been published. But with Meyer's two ensuing entries into the series,"Twilight" has become a publishing juggernaut of nearly "Harry Potter" proportions. The most recent "Twilight" book sold an astonishing 1.3 million copies in the first 24 hours, and fans -- also known as "Twi-hards" -- stay up all night to attend the books' midnight release parties at bookstores across the U.S. Countless online discussion groups are dedicated to the novels, and there are even a few fan-created "Twilight" bands, like the Bella Cullen Project (song titles include "We don't need No Stinking Fang" and "Dig Me a Grave").

This has led some people in the industry to wonder if Hardwicke's film could be the beginning of another "Harry Potter"-style franchise, and so far, signs seem vaguely encouraging. In a survey by the movie ticket Web site Fandango, "Twilight" was voted the most anticipated film of the fall season. Eighty-five percent of ticket purchasers planned to see it more than once, including many in groups. But it remains to be seen if a film that appeals primarily to young women will burn up the box office.

Salon spoke with Hardwicke over the phone from her hotel in New York, about "Buffy the Vampire Slayer," "Twilight's" lack of feminist message, and the challenge of adapting a book with an obsessive fan base.

You've directed several films, including "Thirteen" and "The Nativity Story," and now "Twilight," about teenage girls. What is it about the teenage years that you find so fascinating?

It's the first time you can get drunk or kiss a guy or drive a car, or do crazy, stupid or great things. It's a time that just has so much drama in it, and that makes it cinematically exciting: dramatic, and beautiful, and painful.

The books obviously have a cult following, primarily among women. How would you explain their popularity?

It's just this obsessive rhythmic prose that's almost repetitive. It's like you're getting drawn into this world of obsessive love and that's kind of addictive and fascinating. I think that people get hooked on that feeling, whether it's your first time falling in love or you're 35 and want to fall in love again.

It seems to me that the books are mostly a kind of wish fulfillment. The book positions Bella as an everygirl, while it obsessively emphasizes Edward's beauty.

Are you nervous about fan reaction to the movie?

I'm pretty sure, because of the reaction when anything's been put out there -- if there's a little scene or photographs -- that some people are going to love it and others are going to have their ways to pick it apart. I'm sure there will be a variety of reactions.

With "Twilight," and now "True Blood" on HBO, we seem to be in the middle of a resurgence of the vampire myth. Why do vampires keep on popping up in our popular culture?

It's something in the human psyche, this desire for immortality. I think there are so many reasons that people are fascinated with this idea of eternal youth. That's every advertising image we see every day. Bella, for example, is obsessed. She wants to stay young, and be as young as Edward is. She's obsessed even with three months age difference. It's crazy, but that is our culture.

From a teenage point of view, there's also the metaphor that the vampire has all these hormonal feelings and desires to want to kill their victims. It's in your body. It's pulsing through your veins. You become a teenager and you suddenly have this surge of new feelings that you're not supposed to act on. You're really not supposed to attack every girl you see and try to have sex with her -- or with every guy. Edward is fighting his natural animal impulses, as a lot of teenagers are.

When you're reading the book, the character of Bella seems almost like a blank canvas. It's as if Stephenie Meyer wants the readers to project themselves onto her. Is that something that you considered when you were casting Kristen Stewart in the role?

Every girl that reads the books thinks that Bella is her. Nobody would be 100 percent pleased with how we cast. People think she's too pretty, others think she's not pretty enough. But when I watched "Into the Wild," Kristen had this toughness and strength and also this total vulnerability -- this palpable yearning and desire and openness that I just thought was really powerful and compelling. She's also exactly the same age as Bella: She was 17 when we shot. That wasn't somebody faking what it's like to be young.

In the novel, Stephenie Meyer is also always bringing up Edward's beauty, and his muscles, and how they catch on his shirt. Given that you're also trying to attract male viewers, did you have any reservations about over-eroticizing Robert Pattinson, who plays Edward in the film?

It's a bit embarrassing for any serious male actor to read the book and think that the film is going to be that adoring of him. But in a film you don't go on and on for pages and pages of description and detail. When he's on the screen, he has that powerful presence. His shirt isn't off in the movie or anything like that.

Did you make any other changes to make the film more appealing to male viewers?

The idea of vampires, with their superpowers, have always been kind of a guy's fantasy too -- that you would have every girl in love with you, and you're able to protect girls, and have to fight other badass vampires. I think the "Twilight" series did catch on first with girls, but there seem to be a lot of guys responding to it too.

We did screenings for the girls, for some friends and family and Twi-hards and one of the biggest things they commented on was that they love the action. It's not just guys who love action.

If you compare Bella to the characters in "Gossip Girl," for example -- who are so culturally savvy -- she doesn't seem especially contemporary. Did you have any interest in inserting more pop culture references?

I don't think it's trying to be a movie that's not in its time. You see people on iPods and cellphones, but it's not one of those movies where the dialogue is obsessed with super-fun pop culture references. I guess you could see it's more timeless, classic. It wasn't like we were thinking we've got to get every kind of in-joke that's hip in 2008 that won't be hip next year.

When I was reading the book I was struck by its astonishing earnestness in tone. "Buffy the Vampire Slayer" is very similar in subject matter, but it's also ironic and knowing about pop culture. Is that something you were thinking about when you were making the film?

This is a bit weird, but I've probably never seen one second of "Buffy the Vampire Slayer." So I am an ignorant person and I cannot compare it. I know nothing about it.

It's Bella's character arc [by the fourth book] that she becomes more powerful by the end. But she is more just a regular girl instead of a superhero in the first book. We made her a little more feisty, but we did try to stay true to the character Stephenie created. We weren't specifically going to make her this powerhouse role model. We weren't going for that kind of a message.

Do you usually try to incorporate a feminist message into your films?

No. I wouldn't say so. I try to find the inherent truth in the character. I thought it would be more powerful if it's just true to the specifics of the people instead of trying to wag my finger.

There are three more books out there. What are your plans for the sequels?

Here's the thing: The next film would be a lot more expensive than this one. It would have a lot of CGI, and werewolf transformations, and a whole new cast of characters. It goes to Italy and there's more action, jumping off cliffs and motorcycles.

If this does well enough, only then would we be able to make a sequel. I think everybody is kind of waiting and seeing if we can afford to make the next one. I haven't gone out and bought a new Prius quite yet.