Bill Gates and the Beatles owe their genius to nurture not nature, argues the acclaimed "Tipping Point" author. It's a nice theory. 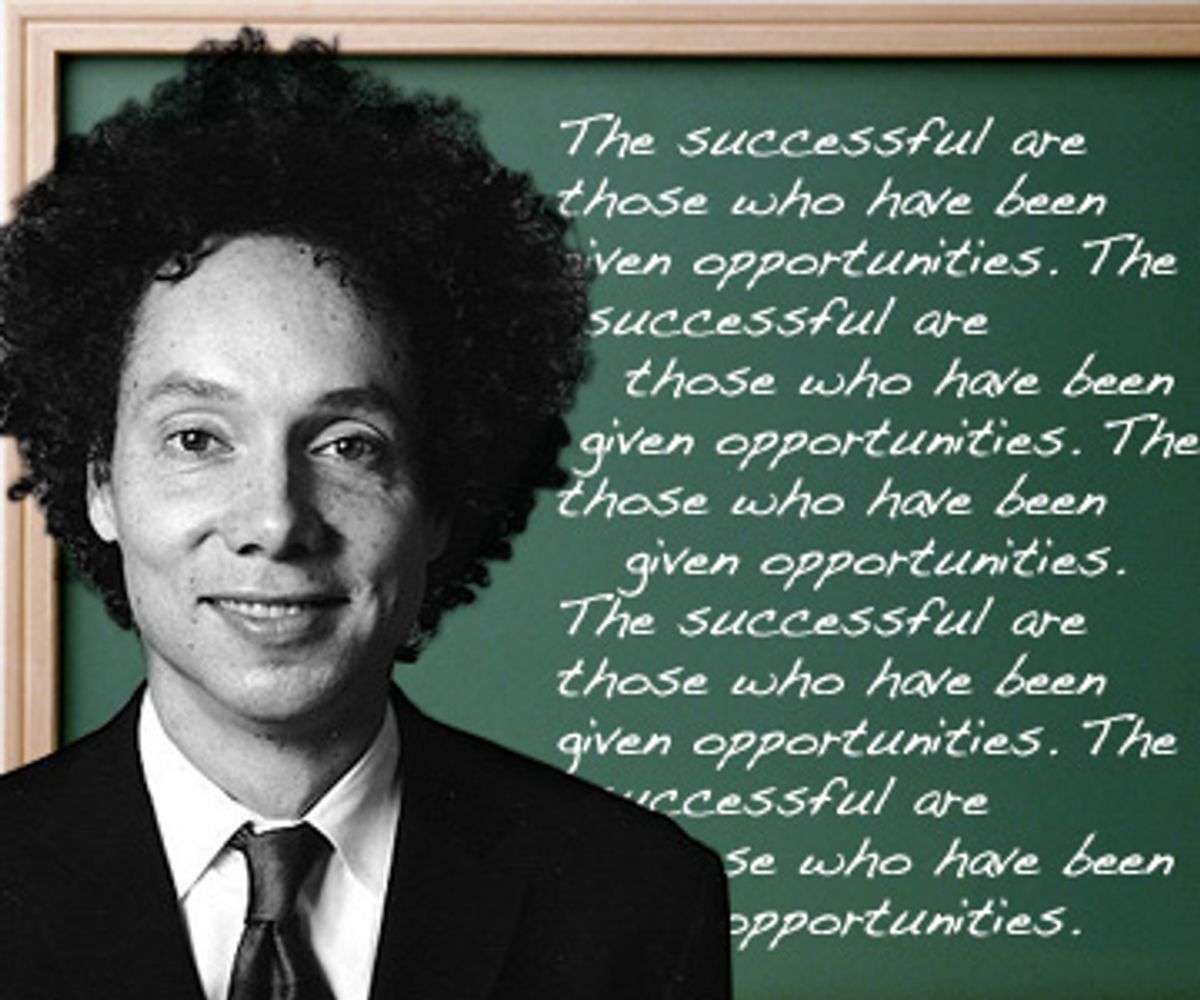 "Consultants are people who borrow your watch and tell you what time it is," business executive Robert Townsend once said, "and then walk off with the watch."

Townsend didn't live long enough to witness the ascent of über-consultant Malcolm Gladwell, who walks off with considerably more than a watch: $40,000 a speech, by most accounts, and an annual income in the neighborhood of $1 million. Buoyed by two runaway bestsellers, "Blink" and "The Tipping Point," Gladwell has positioned himself as a roving ambassador between cultural and corporate America, penetrating boardrooms and living rooms, providing bullet points for cocktail parties and management seminars, and changing not just the things we talk about but the way we talk about them.

But in this new era of belt-tightening, everyone must expect some cost-benefit analysis, and so, in our best consultant-speak, we ask: How much value does Malcolm Gladwell really add?

Well, he saves us from having to read the unfiltered prose of Thomas Schelling. Not to mention the many other academicians whose work Gladwell has synthesized and synopsized. A New Yorker staff writer and, before that, a science writer for the Washington Post, Gladwell is extremely skilled at translating arcane research into common-man language. But what truly separates him is his ability to repackage that research into formulas so tidy and attractive they burrow straight into the zeitgeist.

Gladwell didn't originate the phrase "tipping point," but he made it part of our discourse. To a lesser extent, he did the same thing with "social epidemics" and "thin slicing" and "mavens" and "connectors." Even people who haven't read the books still use these terms as a matter of course. Part of the thrill, then, of opening Gladwell's latest volume, "Outliers: The Story of Success," is to see which catchphrases we can master before the rest of the world catches up.

In this respect, at least, "Outliers" disappoints. "Meaningful work" and "practical intelligence" aren't quite as sexy as "the law of the few" and "the stickiness factor." But this may be because Gladwell is less interested in erecting new constructs than demolishing old ones. Specifically, he has his gun sights set on the "genius" theory, which I assumed had gone out of business around the same time as history's "great man" theory but which, according to Gladwell, is still warping our notions of success and failure.

"People don't rise from nothing," he writes. "They are invariably the beneficiaries of hidden advantages and extraordinary opportunities and cultural legacies that allow them to learn and work hard and make sense of the world in ways others cannot ... It is only by asking where they are from that we can unravel the logic behind who succeeds and who doesn't."

In other words, don't ask how Bill Gates got so smart. Ask what unique set of circumstances allowed him to harness his smarts toward world dominion. "Successful people don't do it alone," the author tells us. "Where they come from matters. They're products of particular places and environments."

The mission of "Outliers," then, is to map the "ecology" of success. And so Gladwell teases out the divergences between IQ scores and achievement. He shows how codes of family honor pass virtually intact from northern England to the Cumberland plateau. He studies the conditions by which the Beatles were able to hone their craft over thousands of hours in Hamburg nightclubs. He assesses the class barriers that allowed legendary physicist Robert Oppenheimer to succeed (despite having tried to poison a tutor) while blocking the advancement of an obscure working-class autodidact named Chris Langan.

The first thing to be said about all this is how entertaining it is. Gladwell's curious and eclectic temperament yokes together subjects that, at least on the surface, seem unrelated: "Rice Paddies and Math Tests," to quote one chapter title. On top of that, Gladwell is a superb anecdotalist who couches his case histories as intellectual whodunits. We begin with a puzzle: Why did so many Korean Air planes crash between 1988 and 1998? We eliminate various red herrings: bad morale, procedural violations, flight crews smoking on the tarmac. At last comes the pleasantly shivery moment when Gladwell pulls open the curtain to reveal the solution. Korea's exceptionally deferential culture prevented first officers from challenging captains' decisions in the cockpit. The whole story has been so ingeniously constructed that, as soon as you're done, you want to call someone and tell him what you just learned.

It's when Gladwell begins to extrapolate from his anecdotes that he demands a certain indulgence. "Outliers," for instance, offers a fascinating portrait of a group of eminent New York Jewish lawyers, all of whom were born around 1930. As Gladwell points out, this accident of birth date gave them several distinct advantages. Thanks to demographic shifts, they went to underpopulated public schools, where they received more attention from teachers. They were then able to get inexpensive college and legal educations. Barred from mainstream WASP firms, they were forced to specialize in proxy fights, an area of law that WASPs wouldn't touch. This, in turn, gave them a huge competitive advantage 20 years later when hostile takeovers began to sweep across the corporate landscape.

So far, so good. But Gladwell also finds special significance in the fact that the lawyers' parents were in the garment trade, which, for all its backbreaking rigors, he characterizes as "meaningful labor." Why? Because it offered "autonomy, complexity, and a connection between effort and reward." Moreover, this labor taught the next generation that, in Gladwell's rather sentimental formulation, "if you work hard enough and assert yourself, and use your mind and imagination, you can shape the world to your desires."

But it's precisely by using our minds and imaginations that we begin to see the holes in Gladwell's conclusions. Did Jewish immigrants take up the garment trade because it was meaningful? Or because it was the only trade open to them? Did they really believe, over the course of their hundred-hour workweeks, that they were shaping the world to their desires? And if their work was so meaningful, why did they urge their children to escape into white-collar professions at the first opportunity? And what about the so-called non-meaningful workers (e.g., day laborers, domestics, construction workers)? Did any of their children become lawyers?

Similar questions pop up in Gladwell's discussion of Asia's math superiority. He makes useful points about the simplicity and transparency of Asian numbering systems, but then he heads straight back to the rice paddies, where extreme but, yes, meaningful labor shapes the dogged work ethic that would later forge math champions. But if that's the case, why don't we see a comparable level of math prowess in West Africa, where rice has been cultivated for centuries? Or, for that matter, the Carolinas?

Gladwell's "Outliers" model -- the idea that success is shaped by environment, not genetics -- has two additional problems. First, it is insufficiently predictive. We can easily see that favoring people with January birthdays over people with September birthdays, as Canadian hockey leagues do, can have consequences. But how could anyone have predicted that postwar Jewish lawyers would be rewarded for their expertise 20 years down the road? Or that, 20 years after Bill Gates was born, the advent of the personal computer would turn programming geeks into masters of the universe? These are historical accidents, for which it is impossible to prepare. Success, in these instances, is simply a byproduct of luck.

This leads us to the second problem with Gladwell's model: It is every bit as deterministic as the "genius" model. "The successful are those who have been given opportunities," he writes, "and who have had the strength and presence of mind to seize them." But opportunity is as much out of our control as genetics. What if the opportunity doesn't come? If, as Gladwell suggests, we are prisoners of our ethnic or cultural legacies, what if we are of the wrong ethnicity or the wrong culture? How can we ever hope to succeed? If, on the other hand, we can overcome these environmental barriers through relatively quick fixes, as Gladwell suggests elsewhere, then how significant are those barriers?

Gladwell's books would be more intellectually honest if he simply dispensed with his frameworks altogether, but then, of course, he wouldn't be the cultural figure he is now. Like "Freakanomics" guru Steven Levitt, Gladwell promises to unravel our knottiest problems with the simplest of paradigms. By turning the macro into micro, he frees life of its chaos.

Gladwell, in short, is in the hope business. "People are experience rich and theory poor," he told the New York Times. "People who are busy doing things -- as opposed to people who are busy sitting around, like me, reading and having coffee in coffee shops --don't have opportunities to kind of collect and organize their experiences and make sense of them." He has been so devoted to helping them with this meaningful work that he has perhaps missed one of the signal ironies of our recent financial meltdown, which is how little it was predicted by theory. Indeed, some of our greatest theoreticians were caught dozing in their endowed chairs. (Even Alan Greenspan was forced to recant his lifelong devotion to Ayn Rand.) Economics has never been theory poor, and theory has never been a substitute for thought. Theory's failure, however, has placed a much higher premium on humility.