Has there been too much bipartisanship or too little?

The reward Joe Lieberman will receive today is justified by the claimed need for more bipartisanship harmony. Is it even possible to have more than we have now? 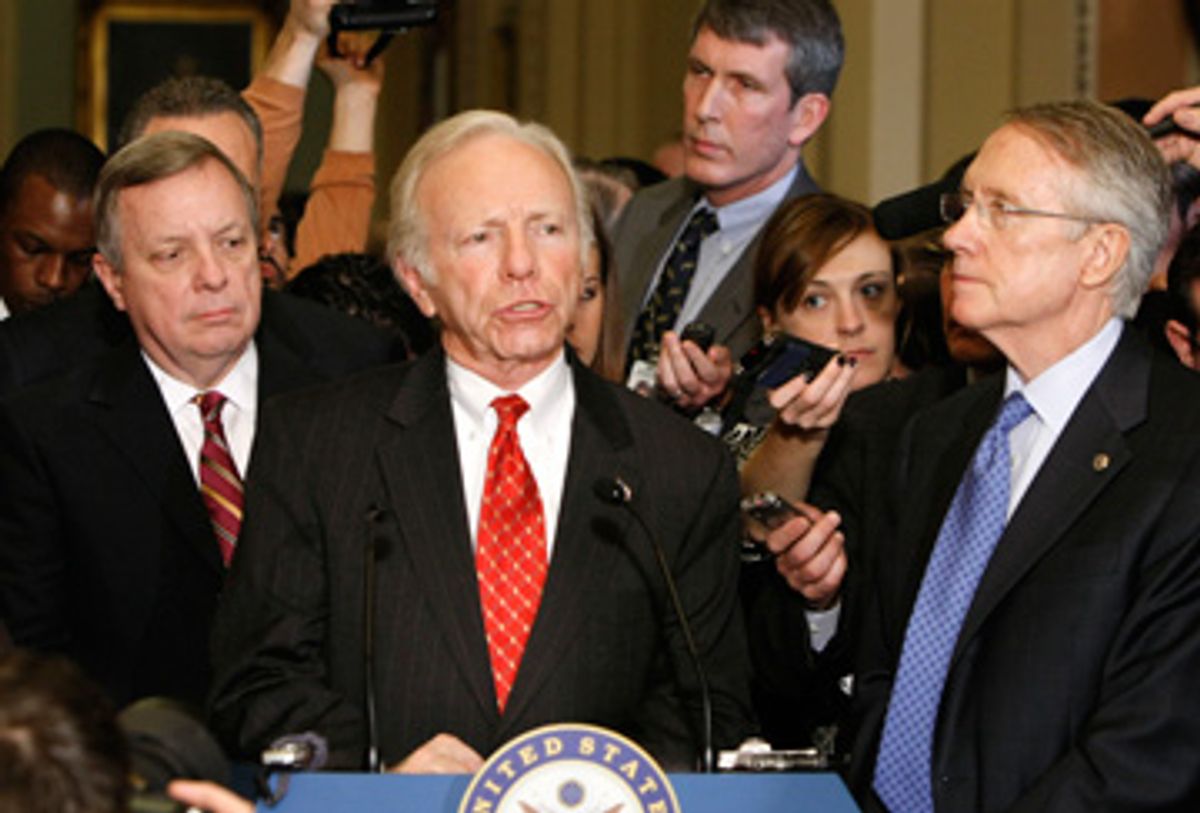 As Senate Democrats this morning prepare to reward Joe Lieberman with the powerful Chairmanship of the Homeland Security Committee, the most commonly recited claim -- both with regard to the Lieberman issue and Washington more generally -- is that Barack Obama's campaign to "change" Washington requires, first and foremost, an end to partisan bickering and a renewal of bipartisanship.  As but one of countless examples, Steny Hoyer told The Hill yesterday "that bipartisanship will be a priority" and the 33 new Democratic members of Congress "were elected on promises of bipartisanship."  In The Atlantic, Ronald Brownstein complains about "escalating partisan conflict" and "hyper-partisanship" and claims that "American politics has been polarized as sharply as at any point in the past century."

Whatever else one might want to say about "bipartisanship," there is nothing new about it.  By definition, it does not remotely constitute "change."  To the contrary, the last eight years have been defined, more than anything else, by overarching bipartisan cooperation and consensus.

Where is the evidence of the supposed partisan wrangling that we hear so much about?  Just examine the question dispassionately.  Look at every major Bush initiative, every controversial signature Bush policy over the last eight years, and one finds virtually nothing but massive bipartisan support for them -- the Patriot Act (original enactment and its renewal); the invasion of Afghanistan; the attack on, and ongoing occupation of, Iraq; the Military Commissions Act (authorizing enhanced interrogation techniques, abolishing habeas corpus, and immunizing war criminals); expansions of warrantless eavesdropping and telecom immunity; declaring part of Iran's government to be "terrorists"; our one-sided policy toward Israel; the $700 billion bailout; The No Child Left Behind Act, "bankruptcy reform," and on and on.

Most of those were all enacted with virtually unanimous GOP support and substantial, sometimes overwhelming, Democratic support:  the very definition of "bipartisanship."  That's just a fact.

Moreover, Bush's appointments of judges were barely ever impeded, resulting in a radical transformation of the federal courts.  Other than John Bolton and Steven Bradbury, not a single significant Bush nominee was blocked.  Those who implemented Bush's NSA program (Michael Hayden) and authorized his torture program (Alberto Gonzales) were confirmed for promotions.  The Bush administration committed war crimes, broke long-standing surveillance laws, politicized prosecutions, and explicitly claimed the right to break our laws, yet Congress did nothing about any of that except to authorize most of it, and investigated virtually none of it.  With regard to many of those transgressions, key Democratic leaders were briefed at the time they were implemented and quietly acquiesced, did nothing to stop any of it.  Both parties are in virtually unanimous agreement that our highest political leaders should be exempt from accountability under the rule of law even for the grave crimes that have been committed.

As The Washington Post's Dan Froomkin observed at the end of last year:  "Historians looking back on the Bush presidency may well wonder if Congress actually existed."  How much more harmonious -- "bipartisan" -- can the two parties get?

Over the last eight years, one can locate a couple of exceptions to this lockstep cooperation in the domestic policy realm, where Democrats managed to deny Bush's wishes -- the failure of Bush's Social Security privitization scheme and some isolated disputes over the magnitude of tax cuts.  And there have been some Democratic initiatives -- SCHIPs funding and mandating more home-time for troops -- which were vetoed or filibustered.  But one is very hard pressed to find any meaningful examples beyond those isolated cases.  Indeed, the bulk of Bush's most substantial defeats -- immigration reform, Harriet Miers, the Dubai ports deal -- came as a result of opposition from the Right, not from Democrats.

Bipartisanship -- cooperation and agreement among the two parties -- is the standard operating practice of Washington, and it has been for many years.  It's certainly been vastly more common than the "partisan gridlock" that conventional Beltway wisdom spouters relentlessly complain is plaguing our political process.  There has been far more harmony and agreement among the two parties, particularly their leaders, than there has been acrimony and discord.  I'm asking this literally:  how would it have even been possible to have substantially more bipartisanship over the last eight years than we actually had?

Our political system is afflicted by many, many problems.  A lack of bipartisanship hasn't been one of them.  At least during the Bush era, the Beltway political establishment has been fueled by trans-partisan cooperation and internal allegiance far more than by any ideological differences, policy debates, or partisan warfare.  Do the last eight years -- defined by George Bush's virtually unimpeded political agenda -- leave any doubt about that?

That's why the outcome of this Joe Lieberman "controversy" is anything but surprising.   Having Democrats overlook Lieberman's extremist views and reward him is anything but "change."  That's perfectly consistent with -- not a departure from -- how Washington works:  political disagreements can be expressed on the rhetorical level but they're virtually always subordinated to the far greater imperative of bipartisan harmony within the political class.

UPDATE:  Here is another intensely shared attribute by both parties:  contempt for, and an insatiable desire to demonize, the so-called "Left."  It's always a close competition among the two parties' leaderships to see which can do that more enthusiastically.

UPDATE II:  The vote to keep Lieberman in his Chair was not even close -- 42-13.  Both Lieberman and Howard Dean agree that it was Obama's desires here that were instrumental in the outcome.  Of Obama, Dean said:  "He called the shots, and that's fine."   That bodes really well for Congressional independence.  Key Obama allies in the Senate -- including Dodd, Durbin and Kerry -- supported Lieberman.

Senate Democrats believe it's important to reward someone with a powerful Chairmanship who has been a vehement supporter of George Bush, the war in Iraq, the full panoply of anti-constitutional abuses, and an amplifier of the most toxic right-wing toxic points.  At the same time, they consider it a good thing to scorn their supporters on what they consider to be "the Left."  For anyone willing to hear it, they've made as clear and resounding a statement -- again -- about who they are and who they do and don't listen to.