First lady got back

I'm a black woman who never thought I'd see a powerful, beautiful female with a body like mine in the White House. Then I saw Michelle Obama -- and her booty! 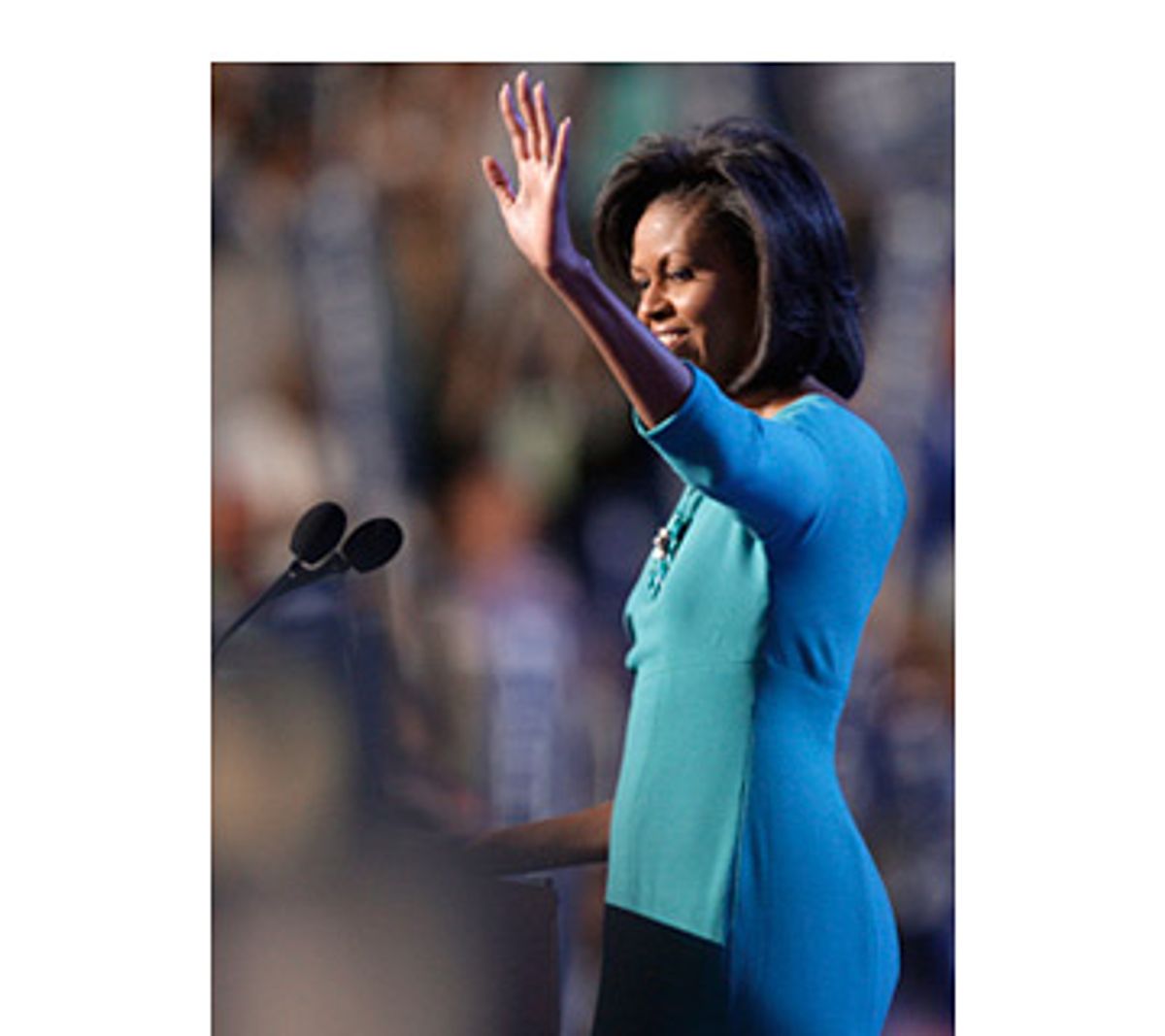 Free at last. I never thought that I -- a black girl who came of age in the utterly anticlimactic aftermath of the civil rights movement -- would say the phrase with any real sincerity in my lifetime. But ever since Nov. 4, I've been shouting it from every rooftop. I'm not excited for the most obvious reason. Yes, Obama's win was an extraordinary breakthrough and a huge relief, but I don't subscribe to the notion that his capturing the White House represents the end of American racial history. Far from it. There is a certain freedom in the moment -- as in, we are all now free from wondering when or if we'll ever get a black president. Congratulations to all of us for being around to settle the question.

But what really thrills me, what really feels liberating in a very personal way, is the official new prominence of Michelle Obama. Barack's better half not only has stature but is statuesque. She has coruscating intelligence, beauty, style and -- drumroll, please -- a butt. (Yes, you read that right: I'm going to talk about the first lady's butt.)

What a bonus! From the ocean of nastiness and confusion that defined this campaign from the beginning, Michelle rose up like Venus on the waves, keeping her coif above water and cruising the coattails of history to present us with a brand-new beauty norm before we knew it was even happening.

Actually, it took me and a lot of other similarly configured black women by surprise. So anxious and indignant were we about Michelle getting attacked for saying anything about America that conservatives could turn into mud, we hardly looked south of her neck. I noted her business suits and the fact she hardly ever wore pants (unlike Hillary). As I gradually relaxed, as Michelle strode onto more stages and people started focusing on her clothes and presence instead of her patriotism, it dawned on me -- good God, she has a butt! "Obama’s baby (mama) got back," wrote one feminist blogger. "OMG, her butt is humongous!" went a typical comment on one African-American online forum, and while it isn't humongous, per se, it is a solid, round, black, class-A boo-tay. Try as Michelle might to cover it with those Mamie Eisenhower skirts and sheath dresses meant to reassure mainstream voters, the butt would not be denied.

As America fretted about Obama's exoticism and he sought to calm the waters with speeches about unity and common experience, Michelle's body was sending a different message: To hell with biracialism! Compromise, bipartisanship? Don't think so. Here was one clear signifier of blackness that couldn't be tamed, muted or otherwise made invisible. It emerged right before our eyes, in the midst of our growing uncertainty about everything, and we were too bogged down in the daily campaign madness to notice. The one clear predictor of success that the pundits, despite all their fancy maps, charts and holograms, missed completely? Michelle's butt.

Lord knows, it's time the butt got some respect. Ever since slavery, it's been both vilified and fetishized as the most singular of all black female features, more unsettling than dark skin and full lips, the thing that marked black women as uncouth and not quite ready for civilization (of course, it also made them mighty attractive to white men, which further stoked fears of miscegenation that lay at the heart of legal and social segregation). In modern times, the butt has demarcated class and stature among black society itself. Emphasizing it or not separates dignified black women from ho's, party girls from professionals, hip-hop from serious. (Black women are not the only ones with protruding behinds, by the way, but they're certainly considered its source. How many gluteally endowed nonblack women have been derided for having a black ass? Well, Hillary, for one.)

But Michelle is bringing those two falsely divided minds together in a single presentation -- finally, unity for the real world! Talk about a power base. Thanks to Michelle, looking professional and provocative in a distinctly black way will become not only acceptable but also part of a whole presidential look that's more, well, inclusive. Now we'll all be able to wear leggings to board meetings; we'll sport pencil skirts sans the long jackets meant to cover the offending rear at big conferences where we have to make a good impression. It turns out that Sir Mix-A-Lot, he of "Baby Got Back" fame, was not a novelty but a prophet. Who knew? Give that guy a Cabinet post.

Many comparisons have already been made between Michelle and Jackie Kennedy. While I appreciate the spirit, I beg to differ. To put it bluntly, Jackie had no back. Same can be said for gaunt Cindy McCain and the short-lived Republican sexpot Sarah Palin. Jackie was trim and perfect, an inoffensive figure who bucked the curviness of the '50s and put American femininity on the treacherous path of smaller-is-better. Jackie was also a blue blood and a society woman -- an elite! -- so although she set new beauty and fashion paradigms, she also followed old ones.

Michelle radiates something entirely different. She's black high society but by definition that's not silver-spoon; it's the result of navigating the rough shoals of racism that bet against your success every day. It's hard work. Michelle looks great but also physically strong -- she looks ready to leap into action if she's called to it. She looks like she could kick Barack's ass, if need be. She has a physicality that's unprecedented in a first lady. Eleanor Roosevelt wasn't afraid to get her hands dirty, but she broke from family tradition; Michelle represents black striving that is the tradition. Her very presence, butt and all, is a rebuke to all those presidents who've dragged their feet on equality and justice even though they paid it lip service, from Woodrow Wilson to Bill Clinton. Even more clearly than her husband's, Michelle's prominence is saying to the old guard, step aside. Fist bump? Nah. Booty bump is more like it.

Ordinary black women have waited a long time for this. Oh, we've suffered. In a country simultaneously obsessed with consumer excess and weight control, we've been caught in the middle. Throw race into the mix, and we've been downright strangled. The expectations run something like this: It's OK for black women to be heavier than most, but we still have to conform to a universal (that is, white) standard of thinness and shape. This means that, even if you're 120 pounds, your butt better not account for more than 2 percent of that.

Women's magazines talk endlessly about whittling down thighs and waistlines, even jawlines, but butts are still so racially loaded -- so to speak -- they're not even part of the conversation (the closest it gets is "hips," but even white women know that's not equivalent). In other words, butts have never been mainstreamed. And like so many other black characteristics, it endures a double standard. A white woman with an ass can claim to have an exotic appendage that boosts her stock; a black woman with a booty is merely ordinary -- worse than that, she's potentially uncultured, unqualified, ghetto in the most unfabulous sense of the word.

I winced when I heard about "The  Daily Show" spot in which two people in Florida disapprovingly described Michelle as a "horse" with a big "tuchis" -- I give them the tuchis, but the animal reference was jarring. Of course, Michelle's been described very unkindly all year; one blogger called her King Kong's sister. The primal antipathy to all things black has stood right alongside the euphoria of the Obamas' rise, and it's unnerving, to say the least. Michelle, for her part, gritted her teeth -- she actually does that -- and continued smiling and waving. That's politics, but it's also what aspiring blacks have always done in the face of insult and resistance: Bear it. Walk through it.

I can't talk about Michelle's butt without acknowledging her hair, another physical feature that stirs anxiety about black female difference. Let me just say that I hope that gets unleashed, too. How sad that, in order for a black family to prevail -- because Michelle and the girls were all running for office, not just Barack -- they had to sublimate their blackness like crazy, starting with the visuals. Michelle's ethnic butt might have snuck under the radar, but an ethnic do wouldn't have stood a chance.

But now the game is over. The jig is up. Time for us all to let the hair down and let the booty hang out, to put our hands in the air like we just don't care. Will the black aesthetic take over the White House, as many whites openly fear? As that Republican sexpot might say, you betcha. Of course the reality is that black aesthetic is a huge part of American aesthetic and American culture, from fashion to music, language to a physical sensibility that can only be described as bodacious. It's time that we admit all this and give it its place. Michelle started the official coming out with that blazing black-and-red Narciso Rodriguez dress she wore on Election Night, complete with dangly silver hoops that gladdened the hearts of sisters everywhere. She was hiding nothing, and this time she wasn't gritting her teeth about it. She was smiling.

And it was bootiful.