Iraq's approval of the security pact shows that Obama's diplomatic approach is already paying dividends. Now, he must talk to Iran. 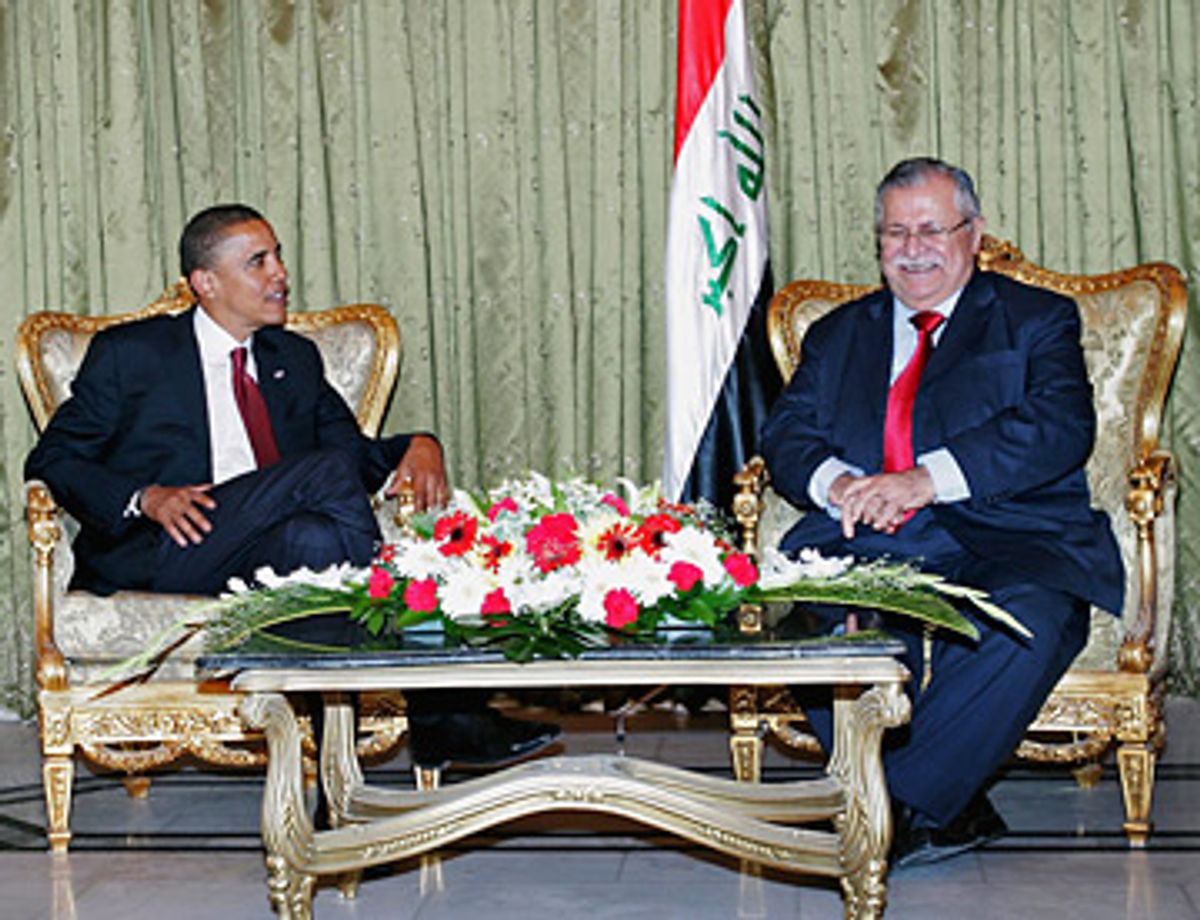 Barack Obama isn't even president yet, but he has already helped bring the Iraq war closer to an end.

On Sunday, the Iraqi cabinet voted overwhelmingly to approve a security agreement calling for the withdrawal of all U.S. forces by the end of 2011. The agreement, which the U.S. has been negotiating with Iraq for almost a year, could still be rejected by the Iraqi parliament, but it has a good chance of passing.

This is a momentous event. If the pact is approved, it would set in motion the end of America's long and calamitous Iraq adventure. And it also clearly demonstrates why Obama's diplomatic, realistic approach to the Middle East is infinitely more effective than the Bush administration's hard-line, ideological one.

One of the major stumbling blocks to the agreement has been Iran. Iran wields great influence with Iraq's Shiite-dominated government. Prime Minister Nouri al-Maliki's ISCI party, formed in Iran by exiled Shiite Iraqis, maintains close ties to Iran. As long as Iran thought that the U.S. would continue its threatening, militaristic stance toward it, it was determined to undermine any agreement. This made perfect sense: Why would Iran encourage a U.S.-Iraq rapprochement if it left the U.S. in a position to use Iraq as a base to attack it?

Bush's hard-line Iran policy thus directly contradicted his Iraq policy. By threatening Iran, he gave it every reason to make trouble in Iraq. His hawkish stance toward Iran simply ignored the unpleasant reality that Iran has both enormous influence over Iraq's government and legitimate security concerns over what happens in its neighboring state. It also ignored the fact that Iran and the U.S. actually have a shared interest in a stable Iraq. And by refusing to engage in diplomacy with the charter member of the "Axis of Evil," he prevented the U.S. from trying to work out an agreement with Tehran that would maximize Iraq's stability while U.S. forces leave.

The Sunday security pact represents a humiliation for the once-triumphalist Bush administration, which has always denounced timetables for withdrawal as tantamount to surrender. The administration that dreamed of using Iraq as a launching pad to invade Iran was forced to include language in the pact stipulating that U.S. forces will not be allowed to launch attacks on Iraq's neighbors from its territory.

But despite these concessions, if John McCain had won the election, Tehran, fearing it would be attacked anyway, would probably have pressured Maliki to scupper the agreement. But Obama won -- and Iran signed off on it.

Obama, unlike Bush, has suggested that he will talk to Iran. It is far less likely that he will attack it. Moreover, he has called for a complete withdrawal of U.S. forces from Iraq in 16 months, not the 36 called for in the security pact. These factors made it possible for Iran to accept a security pact that it would otherwise have rejected. As Karim Sadjadpour, a Middle East expert at the Carnegie Endowment for International Peace, told the New York Times, "If George Bush's presidency were going to continue through 2012, I think people would be a lot more concerned. Having this administration really lightens the blow for the Iranians."

Ironically, one of the few tangible achievements that Bush may be able to point to in Iraq was thus made possible by the election of someone who rejects Bush's entire approach to foreign policy.

This episode holds lessons that go beyond the security pact. It demonstrates that, contrary to the Bush doctrine, the U.S. cannot simply impose its will by using force or the threat of force --  indeed, that the threat of force can undermine our national interests. It shows that moralistically dividing the world into good guys and bad guys, while emotionally satisfying, is reductive and self-defeating. In the real world, states are driven by a complex mixture of self-interest and ideological conviction. By ignoring the self-interest of problematic states like Iran, the Bush administration succeeded only in acting against its own self-interest in Iraq. Painful reality forced it to grudgingly recognize this only at the end of its disastrous tenure.

Obama has a chance to start his administration far ahead of where Bush's ended. As the Mideast analyst Robert Dreyfuss noted, Tehran's acceptance of the security pact sends a message that it is open to negotiating with Obama. He must seize this opportunity. Iran plays a key role in the region, from the Israeli-Palestinian conflict to the wars in Iraq and Afghanistan. A diplomatic breakthrough with Iran would make it easier to achieve all of America's goals in the Middle East.

Talking with Tehran would represent a 180-degree turn from Bush's demonizing approach. And much of the foreign policy establishment continues to support that hawkish strategy -- including Dennis Ross, a senior Middle East advisor to the Obama campaign. Citing Iran's alleged pursuit of a nuclear weapon, these figures -- Democrats and Republicans alike -- insist that the new president must maintain the same all-stick, no-carrot approach toward Iran maintained by Bush. Obama, who himself used bellicose rhetoric about Iran during the campaign, will thus be under considerable pressure to toe the conventional line on Iran.

But that would be a disastrous mistake. In an important new policy recommendation, a group of leading Middle East experts including Gary Sick, Thomas Pickering, James Dobbins, Juan Cole, Trita Parsi and Stephen Kinzer called for the U.S. to reject threats of force and sanctions and engage in a robust diplomatic engagement with Iran. Saying threats and sanctions "have not solved any major problem in U.S.-Iranian relations, and have made most of them worse," the American Foreign Policy Project paper argues that "Paradoxical as it may seem amid all the heated media rhetoric, sustained engagement is far more likely to strengthen United States national security at this stage than either escalation to war or continued efforts to threaten, intimidate or coerce Iran." And they point out that the best way to deal with Iran's nuclear ambitions -- which are murky in any case -- is within the context of a larger U.S.-Iranian dialogue.

If Obama continues the U.S.'s hard line toward Iran, he will be applauded by many in the foreign policy establishment as sober and sensible. But he will be strengthening the hand of Iranian rejectionists, and threatening U.S. interests throughout the region -- including our troops in Iraq. He is about to inherit Bush's Iraq mess. The last thing he needs to do is make it even harder to clean up.