Come back, Joe. All is forgiven 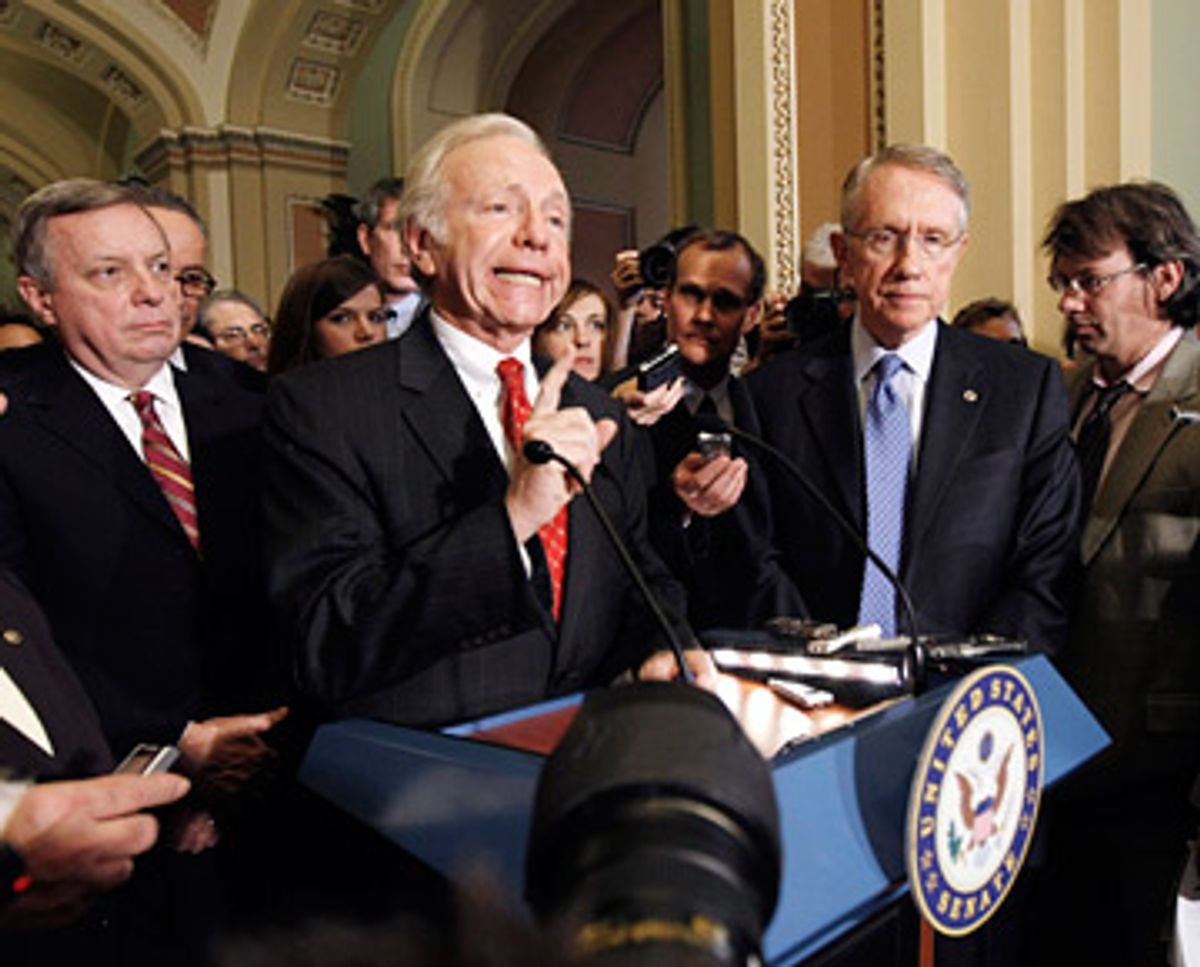 If you ever happen to find yourself accused of serious wrongdoing -- publicly betraying your friends and colleagues, say, or maybe something like a federal felony conviction -- forget about a jury of your peers. What you're really looking for is a jury composed entirely of members of the United States Senate.

Evidently, the Senate is the kind of place where you can do anything you want and get away with it. Lame-duck lawmakers hadn't been back in town 24 hours Tuesday morning before they let Joe Lieberman off with a slap on the wrist, in a Democratic meeting closed to the public, and declined to boot Ted Stevens from his party caucus, in a Republican meeting closed to the public. (It was a forgiving day all around, even by the standards of the world's clubbiest legislative body -- Senate Republicans unanimously reelected their leadership, a couple weeks after they presided over the loss of at least six seats.)

Both of Tuesday's big winners would seem to be ideal candidates for some kind of harsh punishment: Lieberman, for not just endorsing John McCain but putting down Barack Obama as just "a talker" and other deprecating remarks, and campaigning for the reelection of Senate Republicans. And Stevens, for hiding a quarter million bucks in "gifts" from businessmen.

In the case of Stevens, a senior Republican aide said the mood of the GOP caucus was basically one of mercy. Not only was Tuesday the Alaskan's 85th birthday, but it's also likely to be the day that the counting of late ballots from unfriendly precincts of Alaska makes it clear that Stevens has lost his reelection bid, and therefore his Senate seat, after 40 years in the chamber. (Happy birthday, Uncle Ted!) Besieged by reporters when he left the meeting to go to the bathroom, Stevens sounded truly miserable. "I wouldn't wish what I'm going through on anyone, my worst enemy," he muttered. As the aide put it, there was little appetite for "kicking him in the head" on the way out.

But Lieberman presented a far different situation. He was McCain's constant companion on the campaign trail all year; he spoke at the GOP convention, belittled Obama, endorsed various Republicans and generally behaved like, well, a guy who was asking to be tossed out of his party. In contrast to Stevens v. GOP, there is, in fact, a fairly ravenous appetite among Democrats for kicking Lieberman in the head. It's just that that hunger exists mostly outside the walls of the U.S. Capitol. The Democratic caucus, with the blessing and at the behest of their former peer, forgiver-in-chief and president-elect Barack Obama, voted 42-13 to keep Lieberman in the fold. They left him in charge of the Homeland Security and Governmental Affairs Committee, though -- in a vague nod to the idea of retribution -- they did make him give up a subcommittee he ran on the Environment and Public Works panel. "It's very clear that the vast majority of the Democratic caucus wants to keep Senator Lieberman as chairman of his committee, member of the Armed Services Committee, and that was done," Senate Democratic leader Harry Reid told reporters afterward. "It's all over with. Joe Lieberman is a Democrat. He's part of this caucus."

During the caucus meeting, Democrats said Lieberman had made a case for why he should get off easy, telling his colleagues he's got a history of working with both parties, and that he was moved by Obama's election (even if he wasn't sufficiently moved to actually vote for him). Allies like Chris Dodd and Ken Salazar spoke on his behalf; Patrick Leahy and Bernie Sanders argued for punishing him, but it was clear that Reid and his cohorts in leadership wanted to keep Lieberman in the caucus. When Reid opened talks with Lieberman immediately after the election, the apostate Democrat had said losing his committee chairmanship was "unacceptable."

Exactly why Lieberman felt he had any leverage -- after picking sides against his own party, and picking the losing side, to boot -- was unclear. Yes, he could have been a nuisance to Reid if he felt scorned, and Republicans were reaching out to bring him into their caucus if the opportunity presented itself. But a nuisance is about all he could have been. (On the other hand, leaving him with a committee gavel means he's got subpoena power to investigate Obama's administration, though the fact that he never used that power to investigate George W. Bush's should mean he'll be similarly easy on Obama.) Even if Al Franken and Mark Begich prevail in Senate races in Minnesota and Alaska (as seems likely), Georgia Republican Saxby Chambliss is expected to survive a runoff there next month. Democrats will be short of the 60 votes needed to cut off Republican filibusters no matter what; keeping Lieberman happy would be no guarantee that the Obama administration's legislative agenda will sail speedily through the Senate.

But that's how Democrats -- led by Obama, who weighed in on Lieberman's side last week, saying he didn't want anyone to hold a grudge on his behalf -- were spinning their decision Tuesday. "He has sent a very clear signal since his election -- one of humility and one of reconciliation and healing, and it's very clear to all of us that he doesn't want to play the old political games," said Missouri Sen. Claire McCaskill, one of Obama's top surrogates and a close ally during the campaign. "Old politics would have been revenge and retribution. New politics would be, let's get to work." Letting Lieberman slide was an easy political call for Obama, who's trying to convey an image of seriousness, bipartisanship and unity as he prepares to move into the Oval Office two months from now. Anyone watching him sit and schmooze with McCain on Monday, barely two weeks after McCain finally stopped calling him a socialist who would ruin the nation's economy, couldn't have expected him to try to punish Lieberman.

And Reid, who is well-liked among his Democratic colleagues precisely because he leaves decisions like what to do about Lieberman up to the caucus, was never going to put the dagger in if he could avoid it. His style of leadership is more Phil Donahue than Lyndon Johnson; Reid tends to listen to what Democrats think about an issue, then go out and do it, rather than pushing the caucus to go along with his own agenda. So what if precedent is against Lieberman, and so what if the party's most passionate supporters are, too? For all the attention Democrats claim they give to the party's Netroots activists -- especially during even-numbered years, when they need help winning elections -- Tuesday's vote showed that when the base wants one thing and the actual members of the Senate want another, the base ain't going to win. "This Lieberman vote was sort of like this sneering middle finger to yet another piece of the progressive base to say, basically, screw you," said David Sirota, a progressive blogger and author (and Salon contributor). "'The election's over, we'll do what we want.'" Even the party's more liberal members sounded like they weren't interested in fighting the outcome. "That's over, it's behind us, so now we move on," Barbara Boxer said after the vote.

Lieberman claimed he was contrite Tuesday -- sort of. The resolution that left him in charge of his committee also denounced some of his statements about Obama during the campaign. "Some of the things that people have said I said about Senator Obama are simply not true," Lieberman told reporters, at the end of a news conference about his fate, where he stood behind Reid as the leader said he was in the clear. "There are other statements that I made that I wish I had made more clearly. And there are some that I made that I wish I had not made at all. And, obviously, in the heat of campaigns, that happens to all of us, but I regret that. And now it's time to move on." In the real world, that kind of passive-aggressive semi-apology might not fly. But this is the Senate -- where just about anything does. And so Joe Lieberman is back in everyone's good graces.