The GOP's problem? It's not right-wing enough

The House Republicans' newly elected leaders hail from the most ideologically conservative bloc in their ranks. 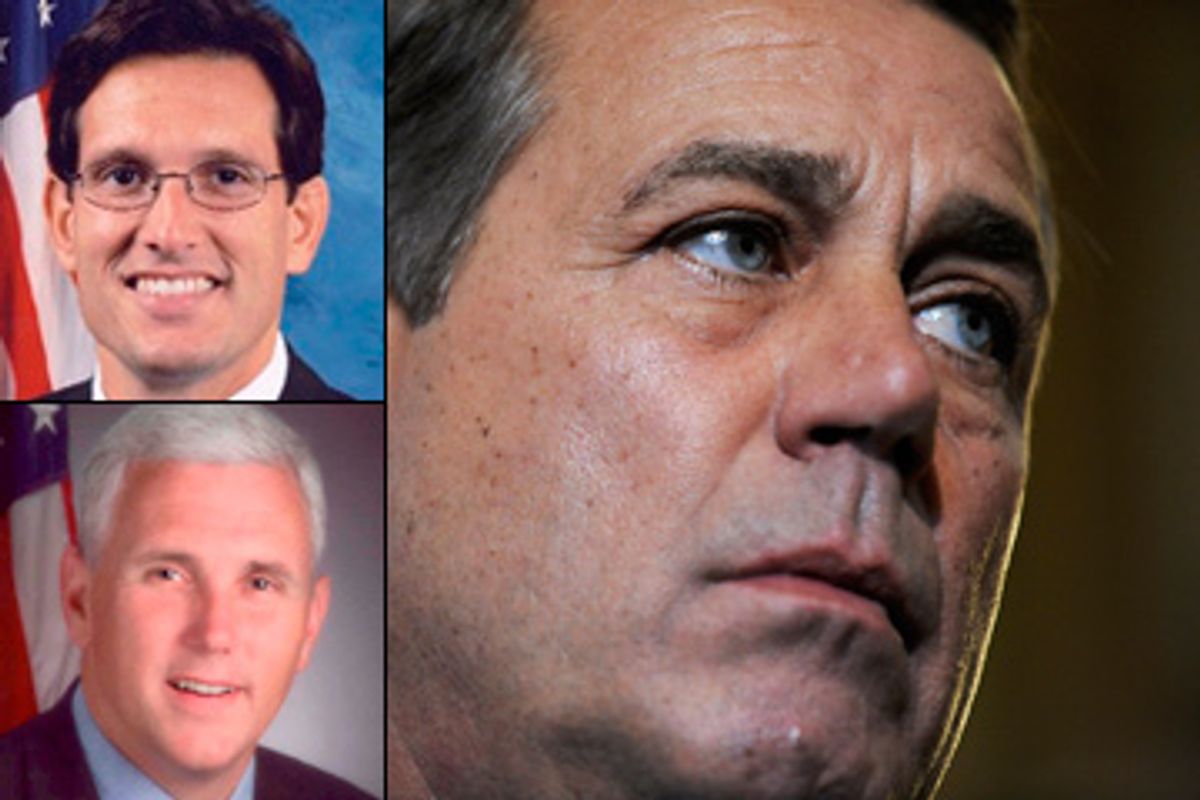 To most observers, the elections two weeks ago sent a pretty clear signal: The nation was sick of George W. Bush, sick of his party, sick of conservatism as a governing philosophy. Don't tell that to House Republicans, though.

On Capitol Hill Wednesday, the House GOP (its ranks reduced by at least 20 seats for the second campaign cycle in a row, and possibly more depending on the outcome of some disputed races) elected a slate of leaders drawn from the most ideologically conservative bloc in their ranks, the Republican Study Committee. As expected, Minority Leader John Boehner, who has cultivated friends among just about every faction there is in the caucus, held on to his job as head of a shrinking party, holding off a challenge by Dan Lungren of California, who claimed he'd bring the party even more to the right than under Boehner's watch. But conservatives managed to push two other leaders out, freeing space for RSC members Eric Cantor of Virginia and Mike Pence of Indiana to move up in the ranks to the two positions right behind Boehner (who isn't exactly a moderate himself). Before the day was over, Cantor had already updated his title on his Web site to Republican whip, though the whip's office site still featured the departed Roy Blunt, a holdover from the days of Tom DeLay's reign whom the party's hardcore right wing didn't trust as much.

(Democrats have their own leadership battle coming Thursday, as California's Henry Waxman tries to unseat Michigan's John Dingell as head of the House Energy Committee. Waxman won a preliminary vote Wednesday among the generally liberal Democratic Steering Committee, but still has to win a majority of the conference.)

Glad to still be in charge, Boehner issued an optimistic statement after the private meeting where he was reelected. He sent a clear signal to the GOP base that he understands frustrations on the right. "The months ahead will present Republicans with an unprecedented opportunity to renew our drive for smaller, more accountable government and offer positive solutions to the challenges facing the American people," he said in a statement.

Translated out of Congress-ese, that means the House GOP is getting back to basics. (Think 1994.) The conservatives who dominate what's left of the GOP caucus -- mostly from the South or the West -- think the real reason Republicans have been losing the last few years is because the party wasn't conservative enough. "There's a strong consensus that Republicans need to start acting like the people whom we say we are," one senior Republican aide who is not involved in leadership said. "We've too often given people the ability to discern that maybe we're not the people who we claim to be ... If you go to the voting booth with the choice of a Democrat and someone who's acting like a Democrat but claiming to be a Republican, you'd go with the Democrat."

The idea now is for Republicans to hew even closer to conservative ideology on issues like taxes, government spending, immigration and others. While the newly dominant RSC echoes social conservatives on things like abortion, gay rights and public prayer, it's mostly motivated by a desire to -- as Republican activist Grover Norquist famously put it -- get the government down to a size where you could "drown it in the bathtub." Conservatives who agreed with that notion have been frustrated watching the party that came to power 14 years ago in a right-wing revolution descend into scandals involving golf trips, massive pork-barrel spending and an often blind obedience to the Bush administration's whims.

Boehner held onto his job in part because he convinced enough hardcore conservatives not to blame him for where they thought the party was going off the rails. (He even managed to win on a few issues, most notably getting House Democrats to go along with allowing offshore oil drilling. "We had an actual policy victory from the minority party in the House of Representatives," another senior House GOP aide told me. "Dude -- that doesn't fucking happen.")

But now he'll have to prove his bona fides to a caucus that's clearly hungry to take noble stands on conservative principle. The GOP thinks those are the positions the public wants, anyway; many of the members left in the House Republican caucus are from districts where the more right-wing you are, the bigger your victory margin will be in the next election.

Ironically, Barack Obama's election could help Boehner out. "There's a lot less likelihood that the party will drift off the cliff listening to the siren song of Obama, whereas they did with Bush," said Norquist. "Bush is a Republican, he's your president, the left hates him, he's got an idea -- you say all those things and you're already half sold on whatever it is."

Republicans will start out skeptical of most of what comes out of the Obama White House, and this time, it won't be Boehner's job to sell them on it. When Bush was in charge, by contrast, that task fell to him -- look at the GOP revolt over the Wall Street bailout to see how thankless that task often was. The party will move even further to the right, and a larger Democratic majority might not need GOP votes on as many issues as they did the last two years. If conservatives are right about what the country really wants -- limited government, lower taxes, and continued deregulation -- their new philosophy could be the path back to Republican power. If not, they might have to get used to being in the minority for a long time.