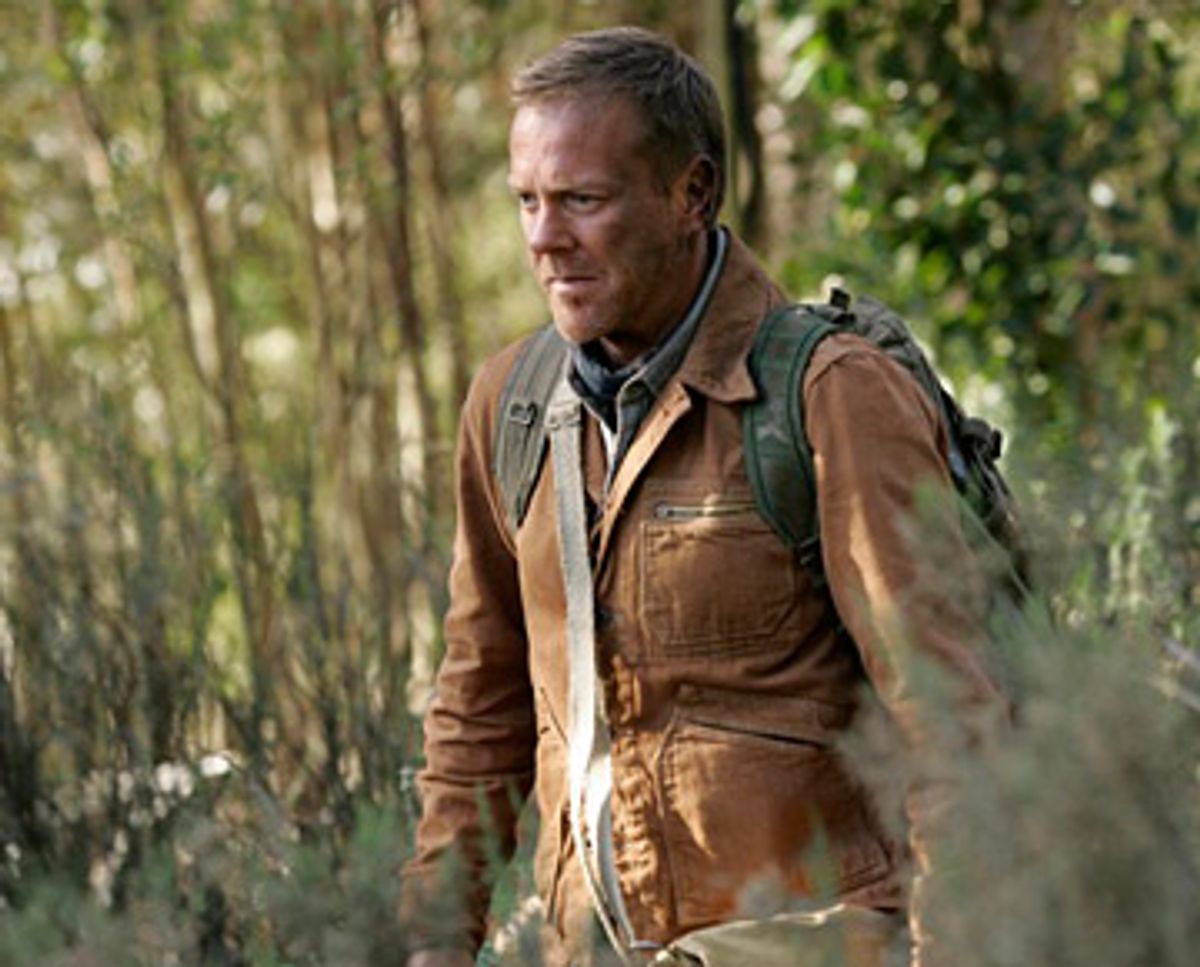 The world-weary look. The resigned sigh. The shrugging, aloof demeanor that says, "I can't let you into my heart. In the end, I'll just have to strangle you to get the information I need. Why bother?"

Yes, after an 18-month wait, Jack Bauer is finally back -- for two hours, at least. But at the start of the upcoming special "24: Redemption" (9 p.m. Sunday, Nov. 23, on Fox), Jack's looking even more resigned and beaten down than he usually does at the beginning of each season of "24."

Of course, once the international high-wire act begins, replete with dangerous militias, high-level conspiracies, corrupt politicians, mysterious murders, illegal weaponry and imperiled children, our old friend is transformed before our eyes into the grenade-hurling renegade we've come to know and love over the years, with his resolute glare and his telltale urgent whisper. Try to tie him up and torture him, and he'll kill you using only a knee to the temple! Mess with his old Army pal, and he'll throw himself in front of a moving bus packed with nuclear weapons! Threaten his homeland and he'll fake his own death, destroy his relationship with his daughter, and doom his chances at true love forever and ever, just to keep the free world safe from harm! How would we ever survive without this man's never-ending compulsion for self-sacrifice?

"24: Redemption" explores what happens to Jack from the point where we left him at the end of the 6th season, distraught and gazing out at the Pacific Ocean like he might jump, to his extradition to the U.S. and appearance before a congressional panel at the start of the show's 7th season (premieres Jan. 11).

Jack didn't hurl himself over that cliff, and he appears to be running from his past. Apparently this is how Jack kills time the other 364 days of the year, while he's waiting for the feds to deport him. But even though he may be about to pay for his aggressive, ethically questionable, nation-saving maneuvers from the last international terrorist crisis, another international crisis is sure to break out and make it imperative that Jack get back into the mix with even more aggressive, ethically questionable, nation-saving maneuvers. After all, he's the only man who can rescue us from nefarious forces afoot in the world, in a head-spinning sequence of events that usually ends with ticking bombs, impromptu chokeholds, high-stakes fisticuffs and the murdering of several people with his bare hands (or feet).

Even so, "24: Redemption" starts a little slower than your typical premiere of "24": We meet a bunch of boys in the fictional nation of Sangala, Africa, where an old Special Forces buddy of Jack's is running a home for orphans. One of the boys idolizes Jack (Join the club, kid!) but Jack shrugs off his affections. Jack doesn't want to be a hero. He just wants to be left alone! (Sniff.)

For someone who doesn't want to be a hero, though, Jack seems to wander effortlessly into the exact center of international tensions, year after year. Soon, we find that Gen. Benjamin Juma is planning a siege on the capital, but not before he snatches up another gaggle of orphan boys and forces them to join his child army. In one scene that feels like it's straight out of a Steven Seagal movie (or "Tropic Thunder," for that matter), boy soldiers get drunk on vodka and watch as one of them is called to the front to hack apart an enemy with a machete.

Yes, this is "24" all right. But the bloody fun is just beginning. When Juma's men find Jack's friend's orphanage, Jack is forced to launch a single-handed offensive against them using the few weapons his buddy has in his arsenal. Yes, it only takes a few minutes of things going Kablooey! before Jack is tied up and tortured by Juma's thugs. But you'd think the world's rebel insurgents and terrorists would've gotten a memo by now: If you ever have Jack Bauer in custody, be sure to tie his hands and his feet.

Ultimately, "24: Redemption" feels like a quickie, condensed version of "24," racing through all of the crucial elements of the show: a heartless foreign enemy, a looming conspiracy, children in danger, an impossible ethical dilemma and a heaping helping of sacrifice by Mr. Bauer himself. This fast-forward approach represents a significant shift from the series itself, and makes it a little tough to get into this story, as nice as it is to see Jack again.

In truth, the previews of the upcoming season are the real kicker here. Suffice it to say that an old friend, one whom Jack thought was dead, reemerges and plays the part of Jack's mortal enemy. Now let's see, which of Jack's old friends are vengeful and slightly unhinged?

Another bonus is that the new season will take place in D.C., a welcome change from the same old terrorist plots to blow up some small portion of Los Angeles. This setting should offer even more opportunities for high-level conspiracies, and fewer opportunities for random encounters with mountain lions and paranoid hippies in underground bunkers.

But, hey, we're pretty flexible after 18 months of waiting. We don't care if there are pigs flying around with dynamite sticks in their mouths, we just want our world-weary, sighing, shrugging, urgently whispering, throat-grabbing, neck-snapping, neocon hero back.

All hail Jack Bauer! He sacrifices his happiness and risks life and limb for his country, so we don't have to.