The Clintonites in his Cabinet, forgiveness for Lieberman, the creeping signs of centrism -- progressives aren't ready to panic, yet. 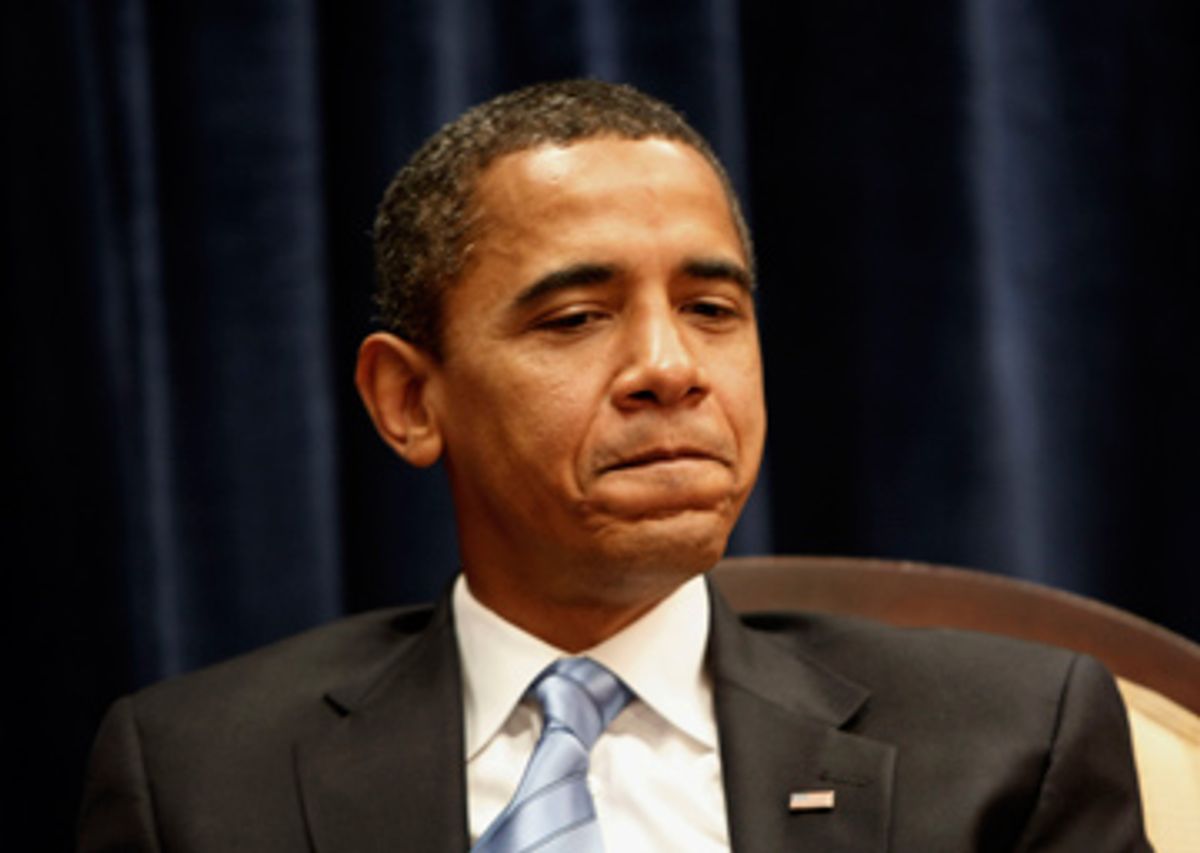 One of the first things Barack Obama did after winning the election two weeks ago was put an old-school political brawler in charge of his White House. Next, he saved Joe Lieberman. Then, he met with John McCain, and asked Hillary Clinton to run his State Department. For good measure, he's also apparently weighing whether to keep George W. Bush's Defense secretary, Robert Gates, on at the Pentagon.

This is the guy Republicans called a socialist, maybe a Marxist, and National Journal said was the most liberal member of the U.S. Senate? McCain aides were saying on Election Night that their own polling showed 60 percent of the country thought Obama was a liberal (and many voted for him anyway). Barely two weeks into the transition, that number might already be dropping fast.

In fact, in his appointments, and in what can be divined of his foreign policy, there are loud echoes of the last Democratic administration, and also of that lady he beat in the primaries, the one the netroots didn't like very much. Certainly, some of Obama's supporters are getting a little nervous about what this all presages about an Obama White House. "The list [of disappointments] is getting awfully long," wrote the blogger bmaz at Firedoglake. "Almost as long as Barack Obama's arm that he used to take our money and efforts to get himself elected. All we have seen is the short arm he has used to punch us in the face and collect street cred with villagers for having done so." Open Left's Chris Bowers wrote on Friday that he felt "incredibly frustrated ... [W]hy isn't there a single member of Obama's cabinet who will be advising him from the left?" Even Pat Buchanan -- not exactly the world's most liberal guy -- apparently thinks Obama needs to throw a bone to progressives after the start the transition is off to.

But so far, the Obama administration is shaping up to be more or less exactly what Obama always said he was, in between the "hope" and "change" rhetoric: pragmatic, consensus-oriented and interested in getting things done. That's not necessarily what a lot of Democrats want him to be, though. Obama was bound to disappoint his supporters; think of the transition as the road map for how it's going to happen. And know that it won't come as a surprise to the president-elect himself; in 2006, in "The Audacity of Hope," he wrote that people tend to "project their own views" on him, and recognized what could happen as a result: "As such I am bound to disappoint some, if not all of them."

"This has been the pattern for him historically -- the left falls in love with him because of his eloquent oratory and his, I think, genuine sense of mission to help people who are less fortunate," said biographer David Mendell. "But he has legislated from somewhere in the middle, and then once he gets into a general election campaign, he tends to squirt that direction even farther. He'll irritate people on both sides -- except the right expects him to be a Democrat, and the far left expects him to be one of them. And he's consistently disappointed the far left."

To date, the president-elect's most notable difference of opinion with his supporters is probably on the subject of Joe Lieberman. He seems to have escaped blame for the Democratic failure to punish Lieberman last week, though Senate Democrats would certainly have been tougher on the Connecticut senator had Obama not intervened on his behalf. Harry Reid, instead, is becoming the fall guy for the slap on the wrist Lieberman received. That's either evidence of denial on the part of many Obama fans, or a sign that, among liberals, Obama has far more goodwill to burn than Reid has. Blogger and author (and Salon contributor) David Sirota blames long-standing Democratic habits and not Obama for Lieberman's escape from punishment. "The Democratic leadership [on Capitol Hill] has decided that the way it is going to govern, it is going to essentially triangulate aggressively against its own party," said. "I actually don't think Obama in his policy positions he's taken since the election -- I don't think he's actually done that. It's possible that congressional leaders are actually fearing that Obama will be far more legislatively aggressive than them."

But the big sticking point for many of Obama's intra-party critics is the strong strain of Clintonism running through appointments. They can lay the failure to banish Lieberman at Harry Reid's feet but they can't rewrite the résumés of people like Rahm Emanuel.

"You could have had an administration with a sprinkling of Clinton people, it would have been fine," said Robert Kuttner, co-editor of the American Prospect and a distinguished senior fellow at Demos, a liberal think tank (and a longtime critic of Bill Clinton's centrist economic policies). "But when so many of the top people are holdovers, and he's promoting change, you have to say, wait a minute." Republicans are hoping to exploit any disconnect between Obama and his supporters -- the Republican National Committee has been sending reporters e-mail blasts of background research on each potential Cabinet pick, pointing out how many are Washington insiders with long ties to the Clinton administration or to other parts of the city's establishment.

The list of Clinton alums in the transition or the administration starts with Hillary Clinton, who is reportedly set to take over at State, then goes to Emanuel, the incoming White House chief of staff, transition co-chairman (and Clinton White House chief of staff) John Podesta and plenty of lower-level aides. Eric Holder, whom Obama will reportedly nominate as attorney general, was a deputy at the Justice Department under Clinton. New Mexico Gov. Bill Richardson, who is likely to be named Commerce secretary soon, had several Clinton administration jobs (though he endorsed Obama after dropping out of the presidential race himself). Clinton's former Treasury secretary, Lawrence Summers, will be a senior White House economic advisor and nearly got his old job back -- which progressives are particularly alarmed about. "Appointing someone who helped get us into this mess with what he fought for is a really bad idea," said Robert Borosage, co-director of the Campaign for America's Future. (New York Federal Reserve branch head Tim Geithner will be named the new Treasury secretary-designate on Monday; he's worked closely with much of the Clinton-era economic team in the past.)

Some antiwar activists are also starting to wonder what happened to the Obama who first rose to prominence in the Iowa caucuses because he opposed the war. "Obama always really used to his advantage the fact that he did not support the Iraq war in the beginning, and that was a key argument that he used to discredit Hillary Clinton, and something that he was able to tout to his benefit," said Kelly Dougherty, executive director of Iraq Veterans Against the War. "People put all this hope into getting Obama elected -- the reasons were much deeper. They didn't just want to get him elected, but they want to see real change." Add in Clinton, at State, and Vice President-elect Joe Biden, and Obama would be getting foreign policy and military advice from a lot of people who supported the Iraq war. And then there are people who are rumored to be under consideration who worked for someone far more hated on the left than Hillary Clinton. If Bush's secretary of defense, Robert Gates, sticks around, how will that play with the base? How about John Brennan, who worked at the CIA earlier in the Bush administration and whom Obama is rumored to like for a top intelligence job (either at CIA or as director of national intelligence)? The Brennan rumor is already proving divisive because of his support for torture.

Still, even critics are sanguine about some of Obama's picks. Obama doesn't have much choice except to turn to ex-Clinton aides in many jobs; there aren't many Democrats who are ready to take relatively senior positions who've worked in government but didn't work for Clinton.

"It hasn't surprised me that he's chosen stars from the Clinton bench, because that's the bench we have," said Borosage, who -- aside from the return of Summers to a national role -- mostly likes the direction of the transition so far. "Many of the appointments strike me as terrific, in the sense of serious people who will try to get things done."

That does seem to be the main factor motivating what the transition team is doing so far. Every public statement from Obama, Podesta and Emanuel has emphasized a desire to hit the ground running on Jan. 20; progressives may not love some of the names Obama is appointing to these jobs, but they still like what he says he wants the appointees to do once in office. Working in Chicago, Obama aides never spent much time during the campaign worrying about what Democrats back in D.C. were saying about their strategy, and so far, the transition team seems to be taking a similar approach. Emanuel, after meeting with Senate Republicans on Thursday, sounded more bipartisan and magnanimous than he ever has before. "The challenges for the country are large," he told reporters. "The problems we face are of a serious magnitude. There is enough area and enough goodwill for ideas from both parties to solve those challenges."

For now, any grumbling is at a low enough volume that it doesn't have Obama staffers worried; even Kuttner said some of the people who might raise eyebrows as Clintonites (like Holder, and incoming White House counsel Greg Craig) endorsed Obama in the primary campaign, representing a clear break. On Capitol Hill, Democrats say they're mostly impressed with the transition operation so far -- there's been hardly any infighting, the leaks of names appear to be deliberate and no one hears a peep about people who weren't picked. Obama's ban on lobbyists in the transition means plenty of Hill staffers are working to put together the new administration, which is a sure way to set lawmakers at ease, and many progressive interest groups already had relationships with the people doing the day-to-day work at the transition.

Still, sometime next year, if the White House proposes something that really gets under the skin of liberal activists, no one will be able to say they couldn't see it coming. It's one thing to build a coalition of progressives and sweep to the Oval Office on the heels of record disapproval for the current occupant. As Obama and his supporters are finding out already, it's a whole other thing to govern.