The miracle of this year's Thanksgiving. 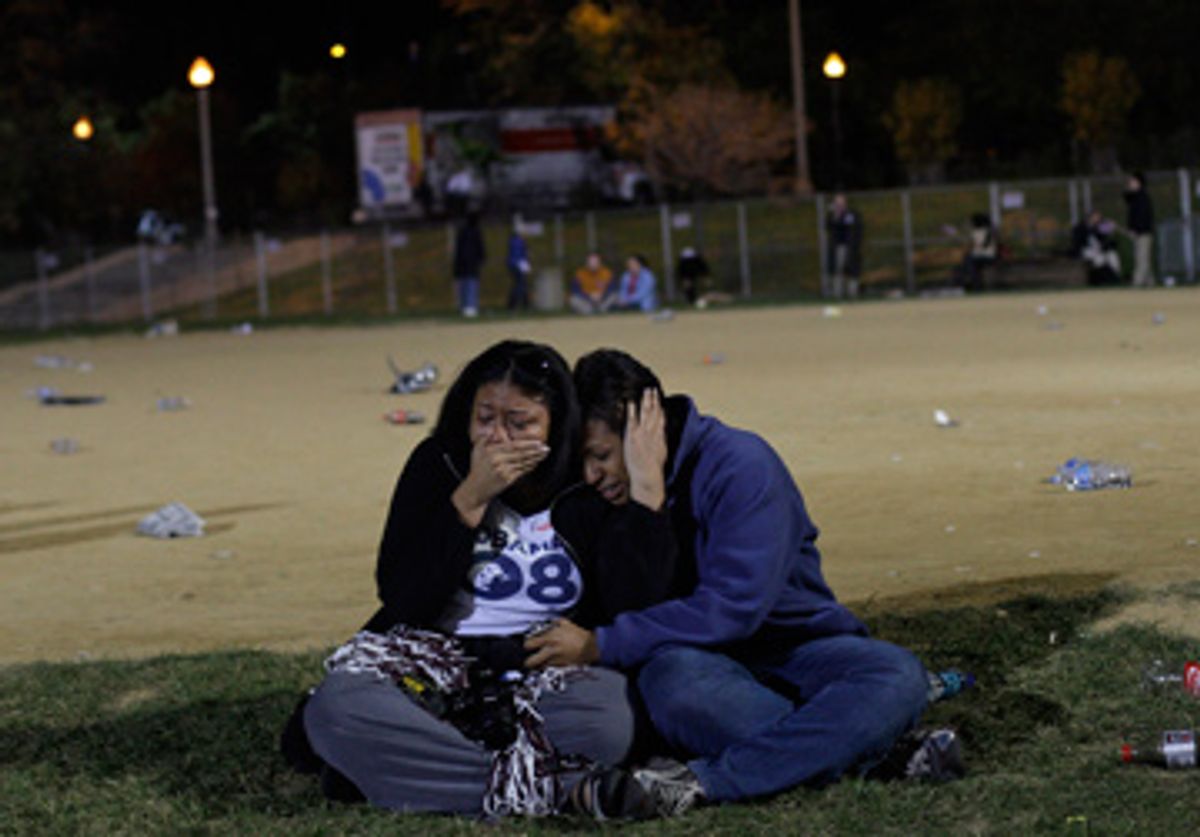 I watched "Mississippi Burning" tonight to honor the election, the miracle. I use the word "miracle," because you cannot get from the South in 1964 to where we are, Thanksgiving 2008. The grace of this is amazing. Grace is when God makes a way out of No Way, and it feels like that is what happened. Eugene O’Neill wrote that we are born broken, and that the Grace of God is glue. That's how it feels, this miracle -- and I was for Hillary in the primaries.

You can't exclaim too many times, you cannot sing the anthems too many times: They will never lose their power. If you're a nice Christian girl, you're supposed to say that only Jesus' blood will never lose its power, and perhaps I will get a shitty place in heaven specially reserved for the blasphemers, with only aerosol cheese and Tang at every meal, but I do believe it to be true.

The people of my church sang "Lift Every Voice" to begin our service on the Sunday after the presidential election, and people sang it from the very mountains, thrusting their fists into the air, clapping, clapping not to try to beat he devil, like the old saying goes, but because we already did beat the devil.

I am not sure I know any other over-informed, middle-aged white people who believe in the devil, but I do: There! I've said it. I believe in evil and the devil. However, I am not going to name names.

My son voted for the first time, and Obama's victory means he won't be drafted to fight in Iran. He celebrated in Marin City, where we go to church, with the black teenagers he knows who gathered on the village green that night to watch the returns on the wide screen that was set up on the grass. These guys will most likely not be drafted to fight in Iran, either. They are beautiful children. Some of them are very lost, scarily lost. Their challenges are enormous -- beyond all imagining. How can anyone even know where to start with them, far less the poorest of the poor in this nation? Well, a whole lot of people do know and have always known and have been doing it for all these years, all these decades, scrolling backward through our history: showing up for the poor and disenfranchised, on the streets and in the courts and in the classrooms. Those who said the impossible couldn't be done got nudged out of the way by those who were doing the work. But it was harder this time not to give up, harder even than with Nixon. Harder even than with Reagan: hardcore hard, like eight years of a grinding brain fever, of soul flu.

I mean that nicely.

We sang like there was no tomorrow: "We have come over a way that with tears has been watered, We have come, treading our path through the blood of the slaughtered; Out from the gloomy past, till now we stand at last Where the white gleam of our bright star is cast.”

I've been singing those words with my church for 23 years, 22 of them sober. The song was first performed on Lincoln’s birthday, 1900, at a segregated school, 68 years before Martin and Bobby’s deaths; 100 and a half years before the Florida recount. But I have never heard anything like our singing on Sunday, Nov. 9. And we're a tiny little church.

Suddenly, it was like being at Cape Canaveral Anabaptist church, reverential and pyrotechnic at the same time. (I certainly mean no offense to Salon's many Anabaptist readers.)

People in church, black and white, were laughing, crying, trembling. Nov. 4 was the second most amazing day of my life (in case my son is reading this). It was something most of us didn't expect to see in our lifetimes. We thought maybe our children would see the day when the greatness of the black race and the civil rights movement would carry the day, but not us. We'd lost too much ground.

Everyone I knew said this, that they didn’t believe they’d live to see the day. One of the oldest saints at our church, Ethel Perry, died a week before the election, at the age of 91. She'd had someone bring her absentee ballot to the hospital along with her glasses and slippers. One night right before she died, she sent her daughter away from her hospital bedside to mail it. Her daughter, who is tall and formidable, said, "I'll mail it on my way home tonight, Mom."

But Ethel said, "You leave this hospital now, girl. Go mail it, and then you can come back."

Some of us who have tiny paranoia issues did not think we’d see a day when the Republicans agreed that they had to leave the White House. We thought they would issue some more signing statements. Or bring back that nice Alberto Gonzales.

Granted, they have not actually relinquished the reins -- in the paranoid sense of the word "they" -- and my friend Doug says that Bush's team hasn't even told him about term limits and that he has to move out of the Oval Office and leave behind the chair. But even though they are still in the office and have the chair, I have actually come to believe that there is better than a 50-50 chance that they will actually leave on Jan. 20.

After the 2004 election, no one could be sure that such a day would ever come. There was something mind-blowingly unique and dreadful about Nov. 3, 2004, a day that will live in psychiatric infamy. A week later, I asked one of the savviest political writers I know when he thought the pendulum would swing back, and he said he thought it would swing back during his lifetime. He said this to cheer me up. He was only 60.

What feels so great is to know that the Republican base is feeling that pain now: defeated and terrified beyond the ability even to express that.

I do not speak for my church when I say, Hah hah.

I am going to be a forgiving and loving Christian person again, probably sometime right after the holidays; i.e., right before the inauguration. Or not.

In the meantime, let me say that word one more time: "inauguration." Of Barack Obama. I don't know if he is great, but I know he draws greatness to him. I know that America chose greatness instead of shit. (I know that sounds a little angry.)

The victory was fueled by courage and grace: Courage is fear that has said its prayers; grace that meets you exactly where you are and does not leave you where it found you but carries you through to safety again. Unbelievable! The world seemed to be going down the tubes, but now it may not. Amazing. And the last shall be first. Thank you, Jesus. Thank you, Sarah Palin.

The last lines of the song go, "Lest our feet stray from the places, our God, where we met Thee, Lest our hearts drunk with the wine of the world, we forget Thee; Shadowed beneath Thy hand, May we forever stand, True to our God, True to our native land."

Every time we sing the song, we draw out the word "forget" to about a minute and a half, "Forgehhhhhhhhhhhhhhhhhhhhhhhhhht Thee!" Then a long pause, a deep, deep breath so we can go on. "Shadowed beneath Thy hand ... May we forever stand, True to our God, to our native land." It is one of the most beautiful songs in history, along with "Ave Maria" and "Nkosi sikelel iAfrica." The Sunday after the election, we sang it for a lifetime of passionate and sometimes mangled hope. And we are still singing it now.