In Barack we trust?

Obama campaigned on his personality and judgment and won. Now, like it or not, he isn't beholden to anyone. 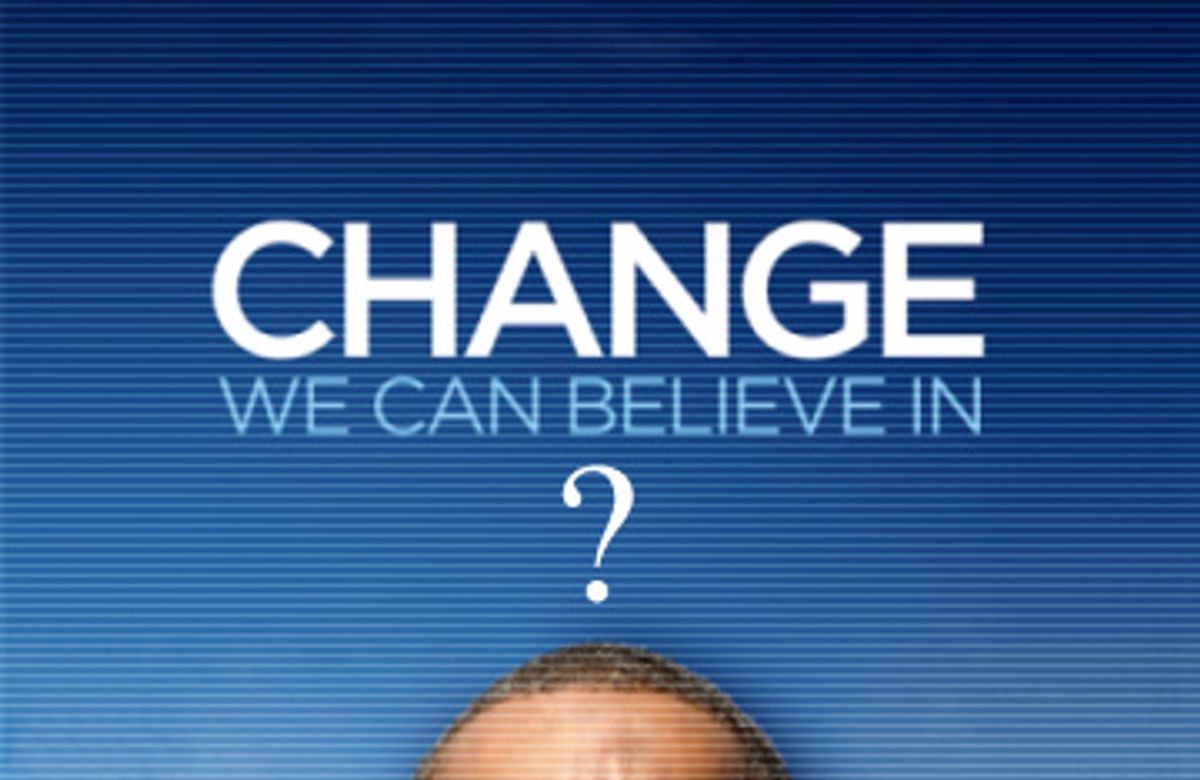 Judging by the proliferation of capital letters in the e-mail correspondence I receive, many seem worried that Barack Obama may not deliver the promised "change we can believe in."

After voters rejected the mantra of free trade and deregulation, some of those contacting me say they are upset that Obama is hiring so many free-trading deregulators who birthed today's economic mess.

With the president-elect having touted his opposition to the Iraq war, some are bothered "that Obama's national security team will be dominated by appointees who favored the Iraq invasion and hold hawkish views," as the Los Angeles Times reports.

Others recall Obama's insistence that "change doesn't come from Washington; change comes to Washington," and say they are dismayed that his government will be run by Washington insiders. And still others are confused that Obama championed a progressive platform but, as the Nation's Chris Hayes notes, "not a single, solitary, actual dyed-in-the-wool progressive" has been floated for a major Cabinet position.

To my fearful letter writers, I offer three responses.

First, I counsel not fretting too much yet. Although there is truth to the notion that "personnel is policy," crises can make radicals out of former establishmentarians, and the president-elect's initial declarations imply a boldly progressive agenda. "Remember, Franklin Roosevelt gave no evidence in his prior career that he would lead the dramatic sea change in American politics that he led," says historian Eric Rauchway.

Second, I tell e-mailers they are right to be somewhat distressed, right to ignore Obama loyalists who want them to shut up, and right to speak out. When President Bill Clinton rammed George H.W. Bush's NAFTA through Congress after candidate Clinton pledged not to, he provided ample reason to recollect the saying "Fool me once, shame on you; fool me twice, shame on me." And voicing concern is critical. As Frederick Douglass said, "Power concedes nothing without demand."

Finally, I ask my pen pals if they really are shocked.

Despite the election's progressive mandate, Obama is not what Ronald Reagan was to conservatives -- he is not as much the product of a movement as he is a movement unto himself. He figured out that because many "progressive" institutions are merely Democratic Party appendages and not ideological movement forces, he could build his own movement. He succeeded in that endeavor thanks to the nation's Bush-inspired desire for change, his own skills and a celebrity-obsessed culture.

Though many Obama supporters feel strongly about particular issues, and though polling shows the country moving left, the Obama movement undeniably revolves around the president-elect's individual stardom -- and specifically, the faith that he will make good decisions, whatever those decisions are. With that kind of following, Obama likely feels little obligation to hire staff intimately involved in non-Obama movements -- especially those who might challenge a Washington ruling class he may not want to antagonize.

This is the mythic "independence" we're supposed to crave -- a czar who doesn't owe anyone. It is the foreseeable result of the Dear Leader-ism prevalent in foreign autocracies but never paramount in America until now -- and it will have its benefits and drawbacks.

Wielding his campaign's massive e-mail list, the new president could mobilize supporters to press Congress for a new New Deal. Or, he could mobilize that army to blunt pressure on his government for a new New Deal. The point is that Obama alone gets to choose -- that for all the talk of "bottom-up" politics, his movement's structure grants him a top-down power that no previous president had.

For better or worse, that leaves us relying more than ever on our Dear Leader's impulses. Sure, we should be thankful when Dear Leader's whims serve the people -- but also unsurprised when they don't.

Please contact your local newspaper editor if you want to see the David Sirota column in your hometown paper.