Bargain gifts for the culture vulture

Because it's boring to just buy "Kung Fu Panda" or "Incredible Hulk." 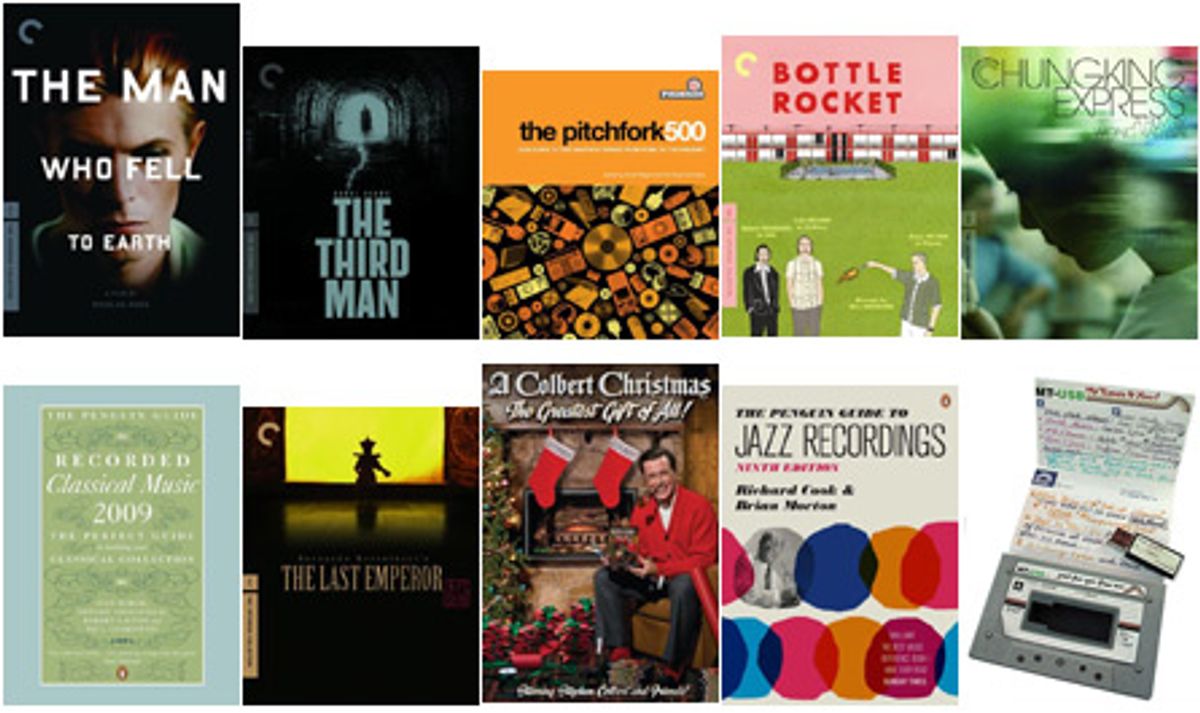 If your early-adopter loved one has already taken the Blu-ray plunge (or owns a PlayStation, arguably still the best Blu-ray player on the market) but wants to venture beyond "Kung Fu Panda" and "Incredible Hulk," help is here. Or rather, almost here. On the leading edge of an incoming tsunami of art-house-flavored releases is the first-ever batch of Blu-rays from the Criterion Collection, available for preorder now and pre-Christmas delivery. It's an eclectic and intriguing blend, from Nicolas Roeg's deliciously culty "The Man Who Fell to Earth"($27.95), starring the 1976 androgynous version of David Bowie, to Carol Reed's sinister, black-and-white Vienna Brit-noir "The Third Man"($28.99), Wong Kar-wai's winsome 1994 romance "Chungking Express" ($27.95) and Wes Anderson's debut indie heist caper "Bottle Rocket" ($27.95). (Bertolucci's "The Last Emperor" ($23.99), exactly the kind of eye-popping spectacle you'd expect to see in a new format, will be along in January.) No telling yet whether technophiles will kvetch or kvell about the hi-def transfers, but to you and me they'll look stupendous.

Stephen Colbert got us through the election with his mock-conservative wit, but can he get us through the holidays? In "A Colbert Christmas" ($12.99), Colbert makes like Bing Crosby and puts a cavalcade of stars (OK, it's just Jon Stewart, Toby Keith, Willie Nelson, John Legend, Feist and Elvis Costello) through an ironic round of Christmas entertainment. The show was also broadcast on Comedy Central in November, but the DVD throws in an Advent calendar and a crackling yule log, and profits will benefit the charity Feeding America.

Technology, schmecknology! If you are nostalgic for the era when you could show someone your affection by putting together a mix tape, check out the USB Mixtape ($19.99), a memory stick embedded in a fake cassette, with just enough room for about an hour of music.

Over the last 13 years, Pitchfork has emerged as the Internet's hipster bible, and most any indie rock fan in your life will appreciate a copy of its shiny new guide, "The Pitchfork 500" ($10.88). Chronologically roaming across the last three decades, the book enthuses over 500 of the site contributors' favorite songs, a hodgepodge that includes everything from Public Enemy to My Bloody Valentine, Arcade Fire to Metallica. If your gift list includes devotees of other musical genres, not a problem: Penguin is just publishing its bumper ninth edition of "The Penguin Guide to Jazz Recordings ($23.10), a weighty (1,600 pages!) and authoritative tome that should appeal to both the obsessive aficionado and the newbie. Equally indispensable to the classical music buff is Penguin's 2009 "Guide to Recorded Classical Music" ($23.10), which surveys current and crucial recordings and even recommends 100 CDs needed to start a serious classical collection.