Luxury gifts for the culture vulture

When you care enough to send the very best box sets and art. 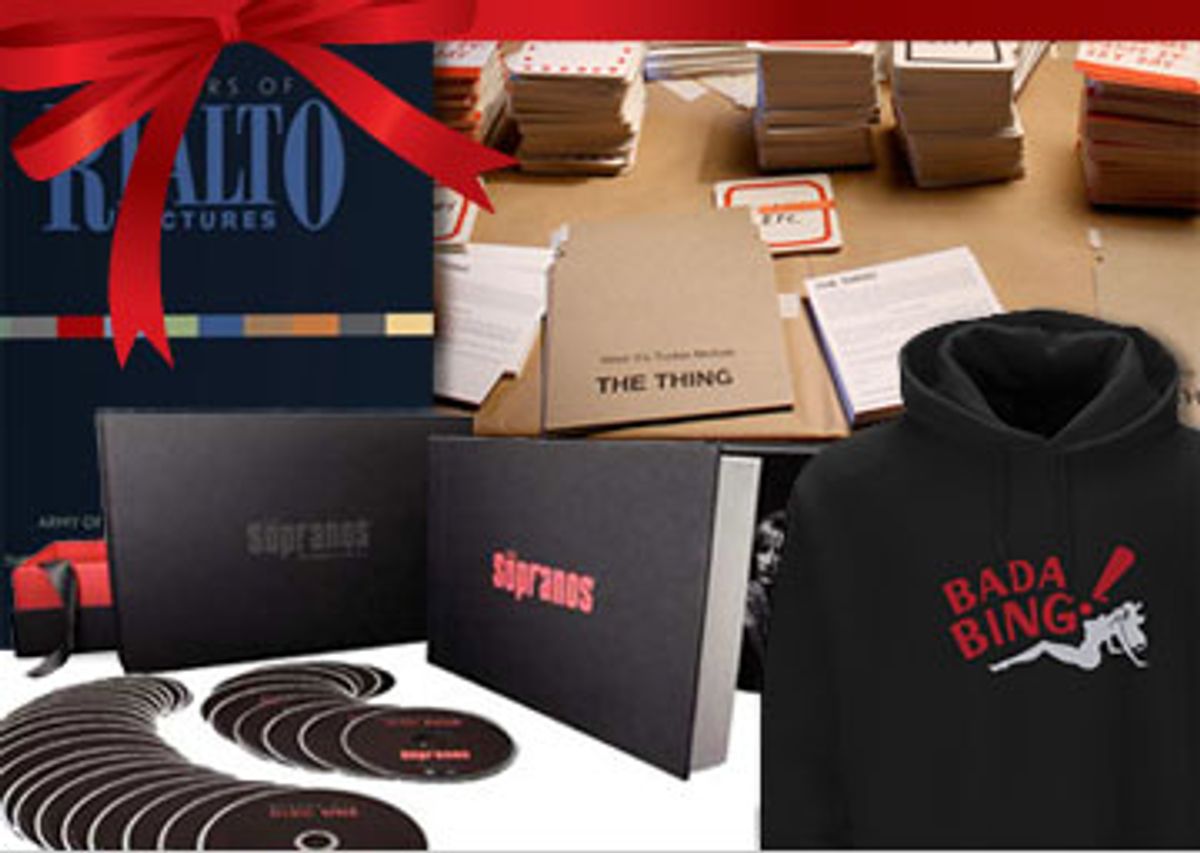 For all those Bada Bing lovers whose lives haven't been the same since the poignant strains of "Don't Stop Believin'" abruptly terminated one of the greatest television experiences of all time: Welcome to "The Sopranos: The Complete Series" ($254.99). You might have to pull off a heist to pay for this collector's edition, which features 33 discs' worth of whacking and yakking, shrinks and finks, along with all kinds of choice extras, like an interview with series creator David Chase conducted by Alec Baldwin, dinner chat with the show's stars, a collection of show spoofs and several soundtrack CDs. Or just spring for a Bada Bing hoodie ($44.95).

Over the last decade, the indie distributor Rialto Pictures has repeatedly done what long seemed impossible -- bringing a significant American audience out of the house to see lovingly restored new prints of world-cinema classics and discoveries. Rialto turned Jean-Pierre Melville's moody French Resistance drama "Army of Shadows," never previously released in the United States, into a coast-to-coast hit and brought us definitive versions of oft-butchered foreign fare ranging from Bresson's "Au Hasard Balthazar" to Godard's "Band of Outsiders" to Ishiro Honda's original Japanese version of "Godzilla" (with Raymond Burr excised). My only complaint about Criterion's new "10 Years of Rialto Pictures" set ($129.99) is that it doesn't include 20 or 30 films instead of 10. (For copyright reasons, such prominent Rialto releases as Gillo Pontecorvo's "The Battle of Algiers," Godard's "Contempt" and Fellini's "Nights of Cabiria" are regrettably absent.) Still, what is here, in uniformly glorious DVD transfers, makes this an absolutely, positively must-have from Buñuel's "Discreet Charm of the Bourgeoisie" to John Schlesinger's unjustly neglected British New Wave classic "Billy Liar" to Alfredo Lattuada's rediscovered black comedy "Mafioso" to Hollywood exile Jules Dassin's heist classic "Rififi."

For the adventurous art lover, a subscription to the Thing ($140 for a year) is just the thing. A quarterly magazine (though not a magazine by any typical definition), "The Thing" commissions a variety of artists and writers to merge text and object. Previous editions have included a window shade silk-screened with words by Miranda July, and a doorstop by artist Anne Walsh. The upcoming cycle will feature projects by writer Jonathan Lethem and artist Ryan Gander. Prefer to buy a single artwork? The proceeds from limited-edition photos and prints by Fred Tomaselli ($300), Mary Ellen Mark ($700) or Holly Andres ($600) go to AIDS research.