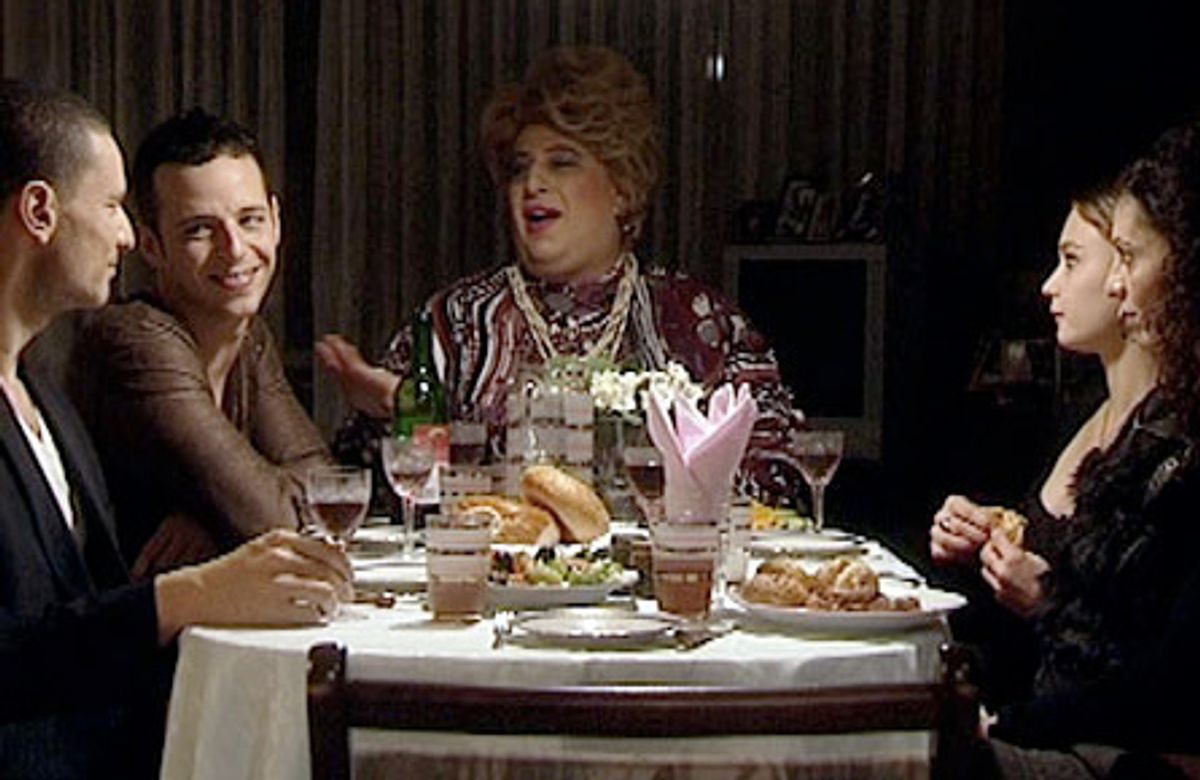 Simultaneously seductive and irritating, raunchy and precious, Israeli filmmaker Yair Hochner's "Antarctica" reinvents the city of Tel Aviv as an erotic pleasure dome for gay men -- and as a folkie coffeehouse that never closes for their lesbian sisters. It's a little silly to talk about a "new queer Israeli cinema" when what you mean to this point is three directors and, at most, half a dozen films. Still, it's true that the explosion of new movies from Israel has included a distinctly gay mini-wave. That trend reached its apotheosis with director Eytan Fox's international hit "The Bubble," which depicted a love affair between two men, one Israeli and one Palestinian, that cannot quite escape from the overdetermined political situation that encloses it.

Maybe progress has been made, of a certain kind; "Antarctica" feels almost like a sequel to "The Bubble," with its surface attractiveness and inch-deep themes, but the Palestinian question is never mentioned and Judaism comes up exactly once, as a jokey aside. Hochner's Tel Aviv is a fantasyland for beautiful gay boys whose mothers just want them to get married (to other beautiful gay boys), a city evidently located in an unexplored corner of Mediterranean Europe, closer to Nice and Barcelona than to Damascus or Beirut.

If "The Bubble" worshiped a bit too studiously at the temple of "Sex and the City," at least until its final and thoroughly implausible turn into tragic darkness, "Antarctica" seems to be a film made by blending "Melrose Place" and Stephen Frears' 1987 boho sex romp "Sammy and Rosie Get Laid," turning all the characters gay and Jewish, and setting them loose to hump each other like wild dogs. Admittedly, there have been worse ideas than that. Indeed, with its rampant and impressive displays of naked manflesh in action -- perhaps there's a combination of two male characters in this movie who don't screw, but I'd need a chart to figure it out -- it's not surprising that "Antarctica" has been a sensation with gay audiences (and attracted a not-insignificant number of female eyeballs as well).

Hochner's got plenty of cinematic ambition. The film opens with a montage of one-night-stand sex scenes, often in overlapping or interlocking frames, and all involving a sultry Lothario who, as things turn out, is only a minor supporting character. The guys he does in that sequence, however, will collide three years later as the principal cast of Hochner's film: geeky-hunky librarian Omer (Tomer Ilan), his best friend Miki (Yuval Raz), shy teenage dancer Danny (Yiftach Mizrahi), worldly journalist Ronen (Guy Zo-Aretz). You can throw in Omer's lesbian sister Shirley (Shirli Salomon) and her rocky affair with her lesbian-coffeeshop boss, but they're just affirmative-action window dressing. And the seemingly endless patches of English-language, sub-imitation-Joni Mitchell folk-pop that accompany their not-so-steamy liaisons are pure torture.

But ambition and a roomful of good-looking guys isn't quite enough. Well, let's be honest; it probably is enough for many prospective viewers of "Antarctica," and given the dearth of gay erotic films that aren't complete and total crap, who can really blame them? There's not much of a story here, though. These guys, all of them relatively likable and largely indistinguishable (except for Mr. Hot 'n' Unhappy in that opening sequence), do the deed in various combinations, randomly jilt each other and/or regret it, and all end up at the same dinner party for Omer's birthday, presided over by his mom. (She is played by a famous Israeli drag queen in the Edna Turnblad mode, which doesn't suit the film's breathlessly earnest, uncampy tone one bit.) There some couples break up and others are formed. No moral is asserted. Events seem likely to go on in this fashion for some time.

OK, that kind of makes sense, although you really do need a scorecard to tell the players apart. But Hochner isn't sure if he's making a comedy in which love conquers all or a fable about the inconstancy of romance, homosexual division. Maybe it's both. But I don't know what the leftover bits of serial-killer movie are doing in here, still less the incomprehensible subplot about a middle-aged female writer with nutty hair who leads workshops for alien abductees. Flourishes of philosophical profundity? Dadaist absurdity? Either way it's a symptom of this movie's near-fatal tendency to overreach. Oh, and yes, I could explain why a movie set entirely in one Israeli city is called "Antarctica," but I'm just not going to.

"Antarctica" is now playing in New York and Los Angeles. It opens Dec. 5 in Denver, Dec. 19 in San Diego and Jan. 2 in San Francisco, with more cities to follow.

Beyond The Multiplex Middle East Movies