So what's in this for Hillary?

Taking charge of the State Department will give Clinton more power than hanging around the Senate -- even if she does have a history with her new boss. 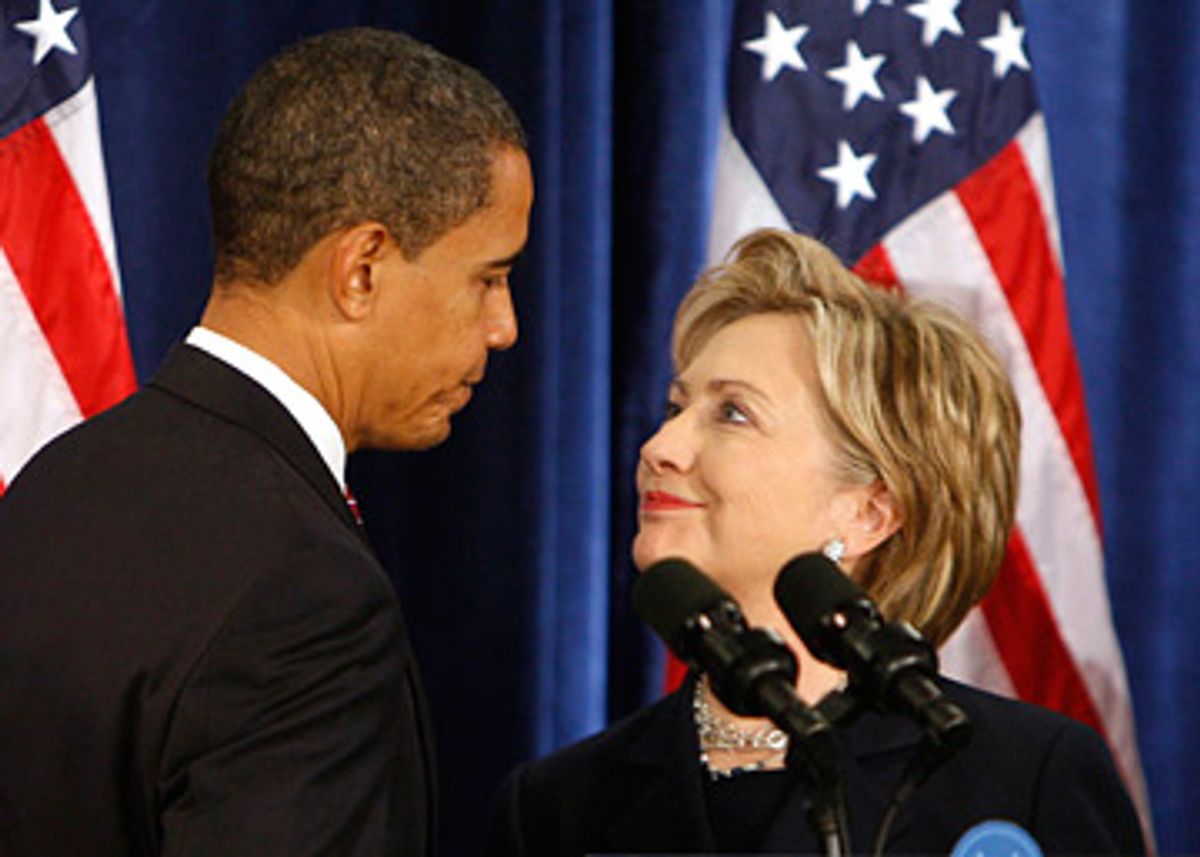 By the time Barack Obama formally announced that Hillary Clinton would be his nominee for secretary of state, the idea had gone from outlandish rumor to trial balloon to done deal to common knowledge for anyone with a pulse, all in the span of a few weeks. And in the end, the scene Monday morning, as Obama and Clinton finally confirmed the worst-kept secret in American politics, was hokey enough to serve as the final shot in some B-grade buddy movie (or maybe some other genre). There was the hero, and the hero's vanquished rival, together at last in the end -- taking turns praising each other, then walking away literally arm in arm as the credits roll, finally united against the real bad guys in the sequel.

For Obama, the motivations for the happy ending to all the drama were reasonably clear. With the announcement Monday that the economy has actually been in recession for nearly a year, he intends to focus on domestic policy early in his term -- and a high-profile surrogate on foreign affairs might give him the time to do it. Along with Robert Gates (currently serving as George W. Bush's defense secretary) and James Jones as national security advisor, Clinton gives Obama a foreign policy team that's hawkish enough to give friends and enemies pause before assuming he'll be easy to shove around once he takes power. And bringing Clinton into his Cabinet nicely fits both Obama's instinct to seek consensus on thorny issues and his thing for Abraham Lincoln (consider that today's mandatory "Team of Rivals" reference).

What's in it for Clinton might seem a little less obvious. After all, she won 18 million votes in the Democratic primary campaign; you'd think that would give her a pretty good head start on building a national constituency as a power player in the Senate. But you'd probably be wrong, and that, former Clinton advisors say, is likely why she decided, in the end, to sign up with Team Obama. Ask John Kerry (or, for that matter, John McCain) how much clout losing presidential candidates bring home with them once it's all over. It turns out 18 million votes don't go that far on Capitol Hill.

"While the Senate provides an important platform and the opportunity to do important work, being one of 100 is a different proposition than being the secretary of state," said Geoffrey Garin, a Democratic pollster who managed Clinton's campaign as the primary fight lurched to a close in the spring and summer. "It's clearly an important moment for the country and a place where she can do a lot of good."

Clinton said the choice wasn't easy (which jibes with reports and rumors from within her orbit that had her zigzagging between yes and no as Obama's offer of the job waited). "Leaving the Senate is very difficult for me," she told reporters Monday morning. "But during the last few weeks, I thought often of our troops serving bravely under difficult circumstances in Iraq, Afghanistan, and elsewhere. I thought of those other Americans in our foreign and civil services working hard to promote and protect our interests around the world. And I thought of the daunting tasks ahead for our country." In the end, Clinton decided, Obama's mandate for change needed the kind of help only she could bring it -- and not with a few field hearings in Utica. "President Kennedy once said that engaging the world to meet the threats we face was the greatest adventure of our century," she said. "Well, Mr. President-elect, I am proud to join you on what will be a difficult and exciting adventure in this new century."

Saying no, though, might have been just as difficult. "Her life truly is about public service, and when the next president says, 'We need you,' someone like Hillary Clinton's natural inclination is to agree to do the job," Garin said. Besides, leaving the Senate may not prove to be that difficult. For all the back and forth over experience during their primary campaign, Clinton has only been there four years longer than Obama has -- this isn't exactly Bob Dole sacrificing his beloved seat after nearly three decades in a failed effort to defeat Clinton's husband. "I think Hillary loves being a senator, but at the same time, I don't think she loved a lot of the headaches that come along with being a senator," said one former advisor.

After all, the Senate still runs on seniority -- and there are a lot of people who have been around a lot longer, even if none of them could ever hope to taste victory in such exotic locales as Puerto Rico or New Hampshire. If Clinton wanted to be the one to push Obama's healthcare agenda through Congress, for example, she would have had to get in line behind Ted Kennedy and six others who outrank her just on the Senate's committee of jurisdiction. "It's not as simple as people think" to retain national prominence in the Senate, the former aide said -- there's a lot of jockeying for turf that never makes it in front of the C-SPAN cameras.

Of course, any administration has its fair share of turf battles as well, as Clinton surely knows. She'll be relatively autonomous in Foggy Bottom, yet in the end, the decisions are Obama's to make. But that may not bother her as much as she wanted people to believe back in March, when she was talking about how Obama wasn't ready to handle a 3 a.m. phone call. Looking back, her former advisors said the campaign probably overplayed the differences with Obama on foreign policy. "As they got into the details, their positions became more and more alike, rather than more different from each other," Garin said.

And besides, if there's anyone who understands that winning is everything in politics, it's Clinton. In the end, Obama earned the right to tell her what to do every now and then. "She wanted to be president," another former advisor said. "She didn't win."