Sister, can you spare a womb?

A style writer shops for a suitable baby mama to bear her blue-blood spawn. 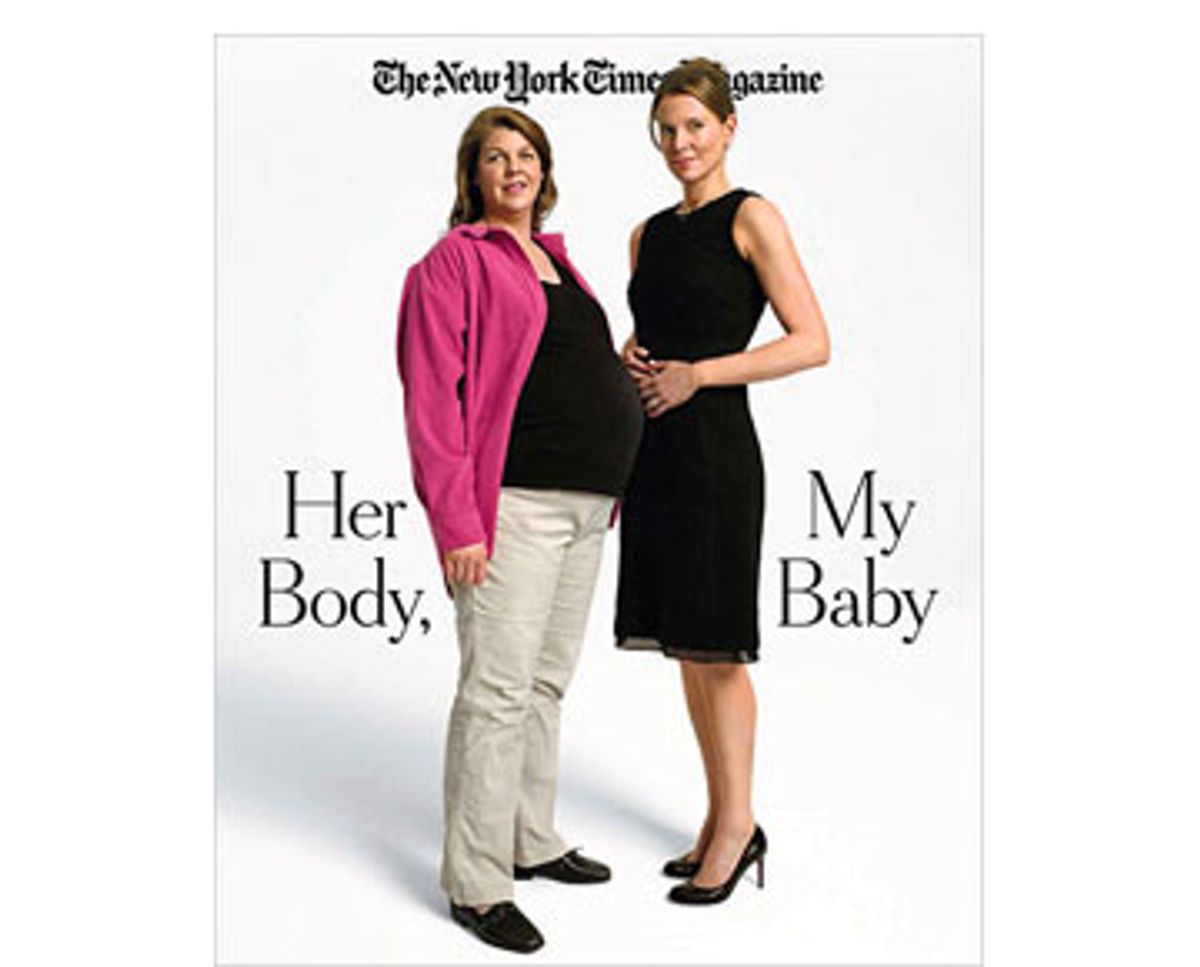 Ah, remember the days when women’s reproductive rights were simply (and perhaps simplistically) represented in that old feminist slogan "My body, my choice"? The cover line for last Sunday’s New York Times magazine shows what happens when women are divided by a  chasm of privilege and puts it a bit more bluntly: “Her Body, My Baby.”

The woman providing the body would be the obviously pregnant one on the left-hand side of the cover, Cathy Hilling, clad in a playground-worthy ensemble of loafers, jeans and T-shirt. The owner of the baby, however, would be the one clutching her barren belly, wearing heels and a black cocktail dress and looking like she’s about ready to exercise her right to hit up a fabulous party. That would be Alex Kuczynski, whom you may recognize as style columnist for the Times, the author of a book on plastic surgery (for which she did plenty of firsthand research) and wife of gazillionaire investor Charles Stevenson.

There is a much larger debate to be had on the ethics of surrogate pregnancy. (Are all women who outsource their pregnancies exploitative capitalists who would be better off raising a needy child? Are they merely combating the tragedy of infertility by any means necessary?) But after reading this piece, I can make at least one unqualified statement: If you are planning to carry a child for another woman, there are many more deserving of your time and womb than Alex Kuczynski of the New York Times. Likewise, if you ever plan to ask another woman to grant you a favor of this magnitude, please have the graciousness to treat her with far more kindness and respect than Ms. Kuczynski has done for the woman to whom she refers as "a vessel, the carrier, the biological baby sitter, for my baby." (Hilling prefers to refer to herself as a "foster mother" -- because she’s done that, too.)

The whole saga begins when Kuczynski, married to a wealthy man 20 years her senior, attempts to extend their family lineage to the next generation. Yes, that may be a loaded way to say that she wants to have a baby with the man she loves. But this is a woman who writes: "The compulsion to create our own bloodline seemed medieval." And,"Die without having created a life, and die two deaths: the death of yourself, and the death of the immense opportunity that is a child."

Kuczynski and her husband decide to hire a "gestational surrogate," a woman who will agree to house their genetically gifted offspring in her womb and carry it to term -- in exchange for $30 - $60k. "We were not disturbed by the commercial aspects of surrogacy," Kuczynski writes. "A woman going through the risks of labor clearly deserves to be paid." To her, surrogacy is akin to organ donation or, more accurately, "organ rental." Well, true enough, but the larger issue, of course, is whether anyone would take on such a burden if she weren’t seriously in need of cash.

Cathy Hilling, the woman she chooses, is married and college-educated -- Kuczynski, hilariously, is impressed that she knows how to use a computer -- and paying college tuition for two children, including a daughter who sold her eggs to help with the costs. Sure, a woman can rent out her womb to pay for her own daughter's college tuition, just as some poor father in India can sell his kidney to feed his family. But offhand, I’d say that, if given a "choice," she’d probably prefer to earn that extra few grand through something that didn’t involve nine months of pregnancy, labor and delivering a baby for a woman who will later write an article referencing her hemorrhoids and flatulence.

The creepiest part of the article is the barely disguised nastiness and envy with which Kuczynski treats Hilling. When she sends out her sonogram to friends, she blackens out Hilling’s name and admits: "It was immature, puerile, like a seventh-grade girl blacking out her nemesis’ picture in the yearbook. I wanted her identity to disappear and mine to take its place." She cheerfully informs us that it was Hilling who thought to buy her a birthday present and bring her a gift to the hospital -- by implication, a nicety that had slipped Alex’s mind. Later, she writes,  "When Cathy told me that she considered the couple for whom she gave birth a year earlier as close as extended family, I wondered: Do we all have to have Thanksgiving together? If so, for how many years? And which husband carves the turkey?" (My faith in humanity was restored, somewhat, when I noted in the comments section that at least one reader had offered Hilling a standing invitation to Thanksgiving dinner in recognition of the favor she had done.)

A year later, back at her Southampton estate -- did we mention the three houses Kuczynski mentions in the article? -- Kuczynski has her designer baby in hand, but she’s still glum. The big question, she frets, is why was she "chosen" to miss out on "the circle of life"? In response, her husband reassures her that she did in fact give "birth" to their son -- he was just a little smaller than usual. Like, egg-size. "He did come out of your body," he says. "With a little help."

Someone in the photo department, it seems to me, decided to have a bit of fun underscoring the true meaning of that last phrase with a bit of visual commentary. Hilling is depicted sitting on her back porch literally barefoot and pregnant. Kuczynski, meanwhile, stands in front of the majestic columns of her Southampton estate holding her child and accompanied by a uniformed black woman referred to, quaintly, as the "baby nurse." It seems that in the Kuczynski household, it’s perfectly clear what position the "help" is meant to occupy.