Elvis Costello chats up everyone from Lou Reed to Bill Clinton on his eclectic Sundance talk show, "Spectacle." 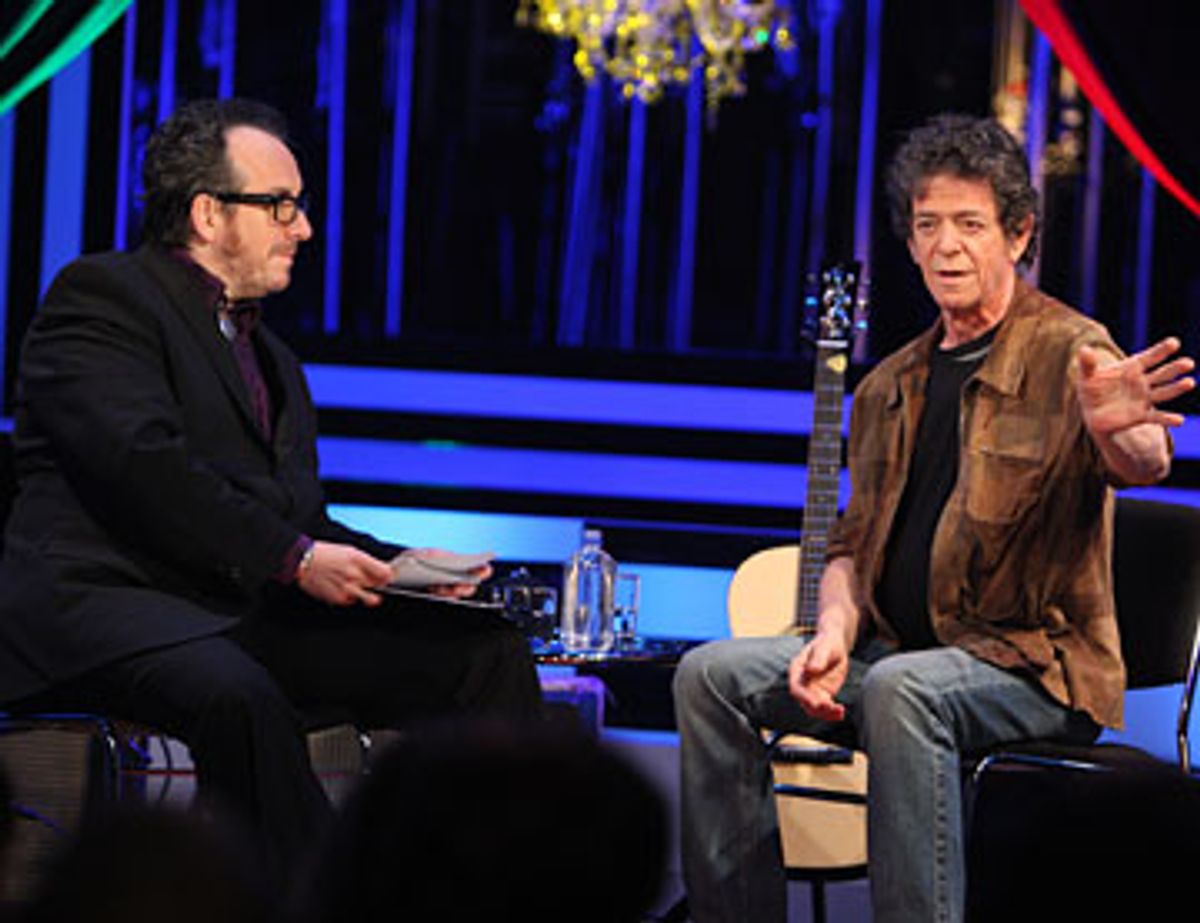 This is what heaven must look like for songwriters. You wander into the middle of a lively conversation between close friends Elton John and Elvis Costello, discussing the virtues of songwriting greats from Leon Russell to Laura Nyro. Next, Costello plays an odd acoustic version of "Femme Fatale" by the Velvet Underground, and Lou Reed wanders in to demonstrate the correct riff from "Sweet Jane," then confesses that his secret dream is to write a New York detective novel. Later, Tony Bennett, Rufus Wainwright and the Police stop by.

There are no probing questions about kicking heroin or feeling misunderstood by the press. There's no talk of how a relationship ended or why a record label moved on. On his new talk show, "Spectacle" (premieres 9 p.m. Wednesday, December 3, on Sundance), Elvis Costello asks the sorts of questions he'd want to be asked, mostly about musical influences, sources of creative inspiration and the songwriting process itself. Not surprisingly, his guests -- mostly singer/songwriters, save for Bill Clinton -- warm up to his inquiries and happily reveal intimate details that they'd never share with, say, Mary Hart of "Entertainment Tonight."

"I just love the fact that I didn't have to write the lyrics, because I'm not any good at it," John says of his longtime collaboration with songwriting partner Bernie Taupin. "I've tried a couple of times and it just isn't within me. I'm good at writing melodies. Bernie is great at writing lyrics."

John also expresses admiration over how Taupin has adjusted to his particular lyrical needs over the years. "When I came out of the closet and said that I was gay, that's when the 'she's' started drying up. Everything then could either be about a man or a woman. That is very clever of him to do that. Because after a certain point, I can't go onstage and sing, 'She's fantastic, I'm in love with her.' Nobody would buy that in a million years."

Costello: That was really picked up by my manager. If you think about the year that I began making records, it was 1977. You had Captain Sensible, Johnny Rotten, Sid Vicious, Rat Scabes ... I think I got off quite lightly. Really, it could've been much worse.

John: You made a wise choice. I mean, Declan McManus, people would think ...

Costello: They'd be expecting a guy in a cable-knit sweater singing whaling songs.

In the second episode of "Spectacle," Lou Reed starts out speaking slowly and deliberately at first, but warms up to Costello's thoughtful questions quickly. Recalling his interactions with legendary songwriter Leonard Cohen, Reed says, "First time I met him was at the Chelsea Hotel, and he said to me, 'I heard your song "I'll Be Your Mirror" and it made me want to be a songwriter.' Then I told that to my friend Eric Andersen and he said, 'He told me that!'"

Costello may bring out the garrulous, insightful side of many of his guests, but he brings out the confessional oddball in artist/filmmaker Julian Schnabel when he joins Lou Reed onstage, ostensibly to talk about their collaboration on a "theatricalized concert version" of Reed's 1973 album, "Berlin." Right before reciting the lyrics of Reed's "Rock Minuet" from start to finish, Schnabel recollects how, after his father passed away, he called Reed, who lives across the street, to come over and hold his father's hand. Reed did as he was asked as Schnabel put Reed's 1992 album, "Magic and Loss" on the stereo. Somehow it's tough to imagine these two sharing the same awkward but nonetheless fascinating anecdote with Jay Leno.

Even the suave, flowing storytelling style of former President Bill Clinton loosens slightly in the presence of Costello's offbeat charms. Early in his interview, Clinton describes the moment he decided he shouldn't pursue his musical dreams: "I remember looking in the mirror one day when I first started to shave and thinking, 'No matter how hard you work, you'll never be John Coltrane or Stan Getz. You're good, and you could be really good, but you probably won't be that great."

"I would've done it, I think, if I thought I could've been the greatest there ever was," Clinton explains, reflecting his ambitious nature with unabashed frankness. "And I knew that I couldn't. And I decided, with no rational basis -- nobody in my family had ever been in politics, we had no money, no connections -- you know, I'm good at this, because I get people and I like the work, and I'm going to try to do this [instead]."

While the unguarded moments and eclectic musical performances -- typically Costello collaborating with a guest on one of his or her lesser-known hits -- make "Spectacle" well worth a closer look, the show occasionally feels like a songwriter's version of "Inside the Actor's Studio," with all of the qualities and the faults that implies. If you don't have a solid appreciation of many of these artists' influences, rambling talk of Laura Nyro's unexpected tempo changes or Doc Pomus' eccentric qualities isn't likely to keep your interest indefinitely.

And then there's that telltale sprinkling of Sundance-branded pretension: shots of pensive, appreciative faces in the audience, digging the esoteric trivia spewed forth by these musical legends. Even if the Velvet Underground changed your life, it's somehow unnerving to see your rapt expression mirrored in the face of some deeply focused, black-clad, music-loving hipster in the crowd. And that's not to mention the occasional closeup of Michael Imperioli or Meshell Nedegeocello in the audience, wearing similar attentive expressions. Intent on parading their indie-celebrity cred for all the world to see, after the show, Sundance treats us to hand-held shots of VIP reactions backstage. Meshell is swooning! And who's that guy, he looks familiar -- wasn't he in Wes Anderson's last film? Far from offering us viewers a feeling that we're in the cool kids' club, these touches just remind us that we could never afford a ticket to this show, we're most definitely not allowed backstage afterward and no, we didn't really just sit around for an hour, shooting the shit with Elvis Costello and Lou Reed.

Sometimes we'd rather suspend our disbelief, and think for just a minute that we were inexplicably granted a free pass to songwriters' heaven.