Luxury gifts for the gadget guru

If you don't mind paying big, think small. Small laptops, camcorders and printers, that is. 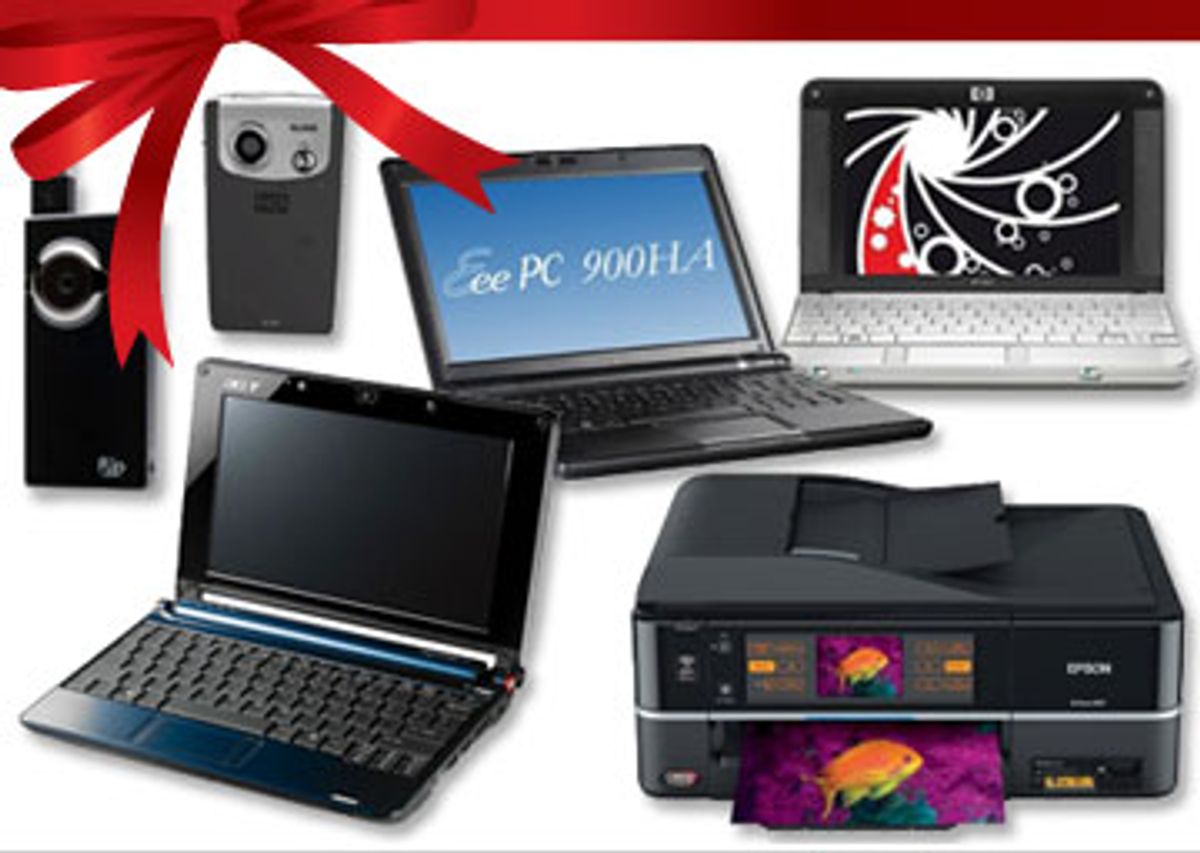 On the subject of little, cute and (relatively) cheap, the title of Most Adorable Mini-Camcorder of the season is being hotly contested between two new entries: the Kodak Zi6 ($179.99) and the Flip MinoHD ($229). I haven't gotten to play with both of them long enough to render a final verdict, so here's what you need to know: Both are irresistible little take-anywheres, no bigger than an iPod. They're ideal for YouTube-generating teens, families at the zoo, video diarists, bloggers and similar users (and if a zero-budget feature hasn't been shot yet with one of these, it soon will be). No one's likely to confuse the picture quality with that of, say, Canon's VIXIA series (which starts around $600), but contrary to some Internet grumping you'll run across, yes, the Zi6 and the MinoHD shoot genuine hi-def video (just not at the highest possible resolution). Getting a steady image when your camera weighs less than 4 ounces (!) is a challenge, but uploading, editing and TV playback is easy on both. Both arrive with adequate software packages and slightly different rechargeable battery configurations. Here's the biggest difference: the Zi6 pretty much requires the purchase of an SD/SDHC memory card (up to 32GB), while the MinoHD has 4GB of on-board flash memory (for about 60 minutes of HD-quality video). If one thing tips me toward the Flip, it's the swingin' array of available designs (you can even customize it with your own photo). Both will make for a giggly gift-opening morning.

Are you as sick as I am of suffering chronic shoulder injuries from hauling around that heavy object so wittily referred to as a lightweight laptop? Are you burned out on half-assed stopgap solutions? (I went to the Cannes Film Festival armed only with a Palm TX hand-held and a wireless keyboard, and boy, was I sorry.) If so, here's a 2008 holiday gift that really means something: It's the year the mini-laptop was finally ready for prime time (at a price that won't make your eyes bleed). Sure, someday fairly soon the iPhone may do almost everything a PC can do, but between then and now there are several intriguing and truly lightweight options, ranging from the OQO Model 02, a 5-inch palmtop that weighs less than a pound (and costs $1,250) down to the three low-cost machines that have shifted the market: the Acer Aspire One ($399), the ASUS Eee ($328.20) and the HP 2133 ($399.99) (all available in various configurations). While the Aspire One and the Eee are near-clones -- they have the same 8.9-inch screen and the same Intel Atom processor, along with 1GB RAM, a 160GB HDD and an on-board webcam -- I lean slightly toward the former on features, design and weight. The Aspire is about 6 ounces lighter, at 2.2 pounds. That said, the Eee is about $80 lighter on your wallet.

But if this is a good year to gift your loved one with a downsized computer, it's also a good one to upgrade his or her irritating and disappointing printer. (Everybody I know has got one of those.) In this age of ultracheap inkjet all-in-ones, it might seem imprudent to pay $300 or so for Epson's new Artisan 800 printer ($261) -- but that's because you haven't seen it in action. Scanning, copying and ordinary printing are all outstanding on this stylish machine -- at its highest speed, the Artisan can print black text or graphics at 38 pages per minute -- and setting it up on my home wireless network, while not exactly a breeze (extensive software installation was involved) was reasonably straightforward. But what makes the Artisan awfully close to a category-killer at this price point is the fact that, to put it directly, you'll never order photographic prints again. Its dazzling, professional-quality UltraHD photos have vivid, natural, smudge-resistant colors, and look like nothing you've ever seen come out of an affordable inkjet.