Detroit revs up its bailout begging

On bended knee, and with promises to retool their operations, the Big Three ask Congress for billions to save the auto industry. They might get it this time. 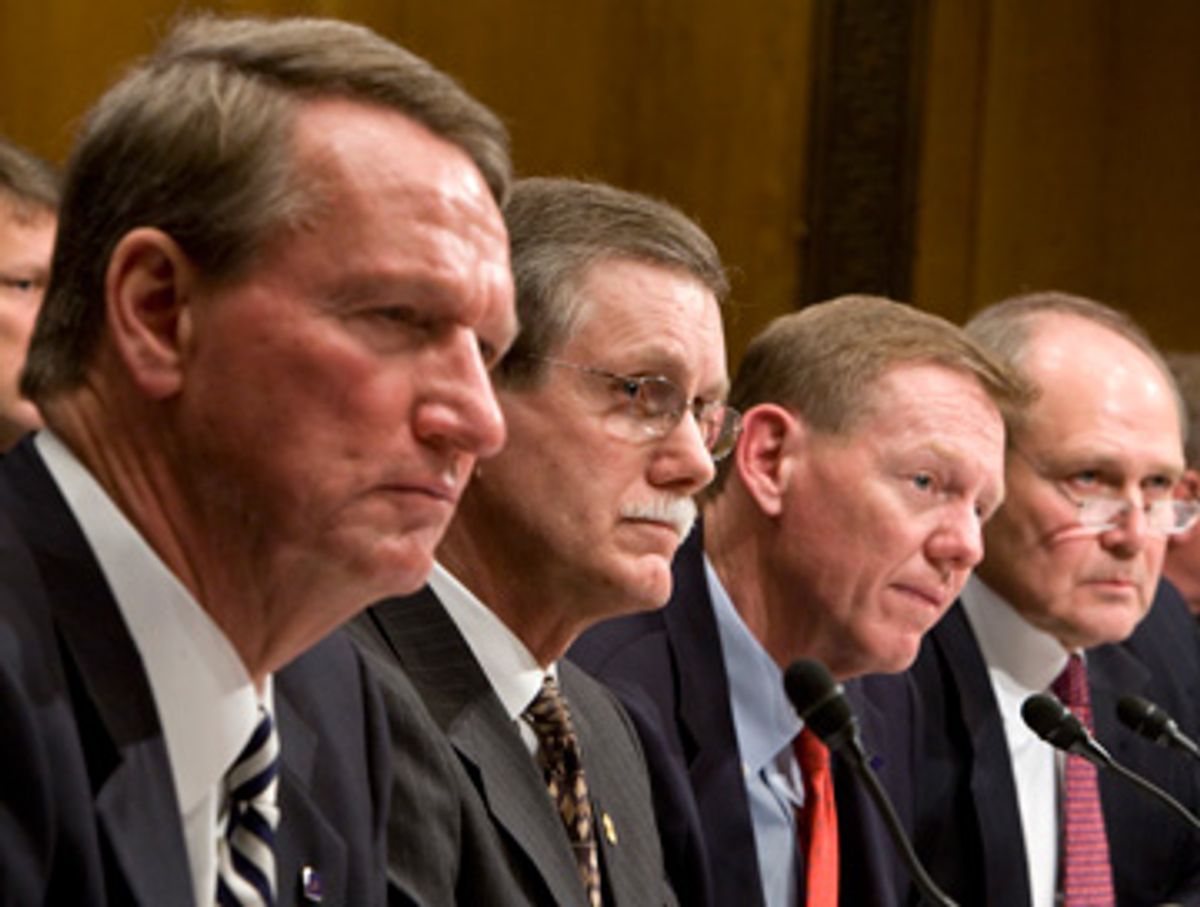 For the most part, the drive from Detroit to Washington is pretty boring (though there used to be a pinball machine at one rest stop on the Ohio Turnpike that gave unlimited multiballs in every game, which could keep even the weariest travelers busy long enough that they wanted to get back in the car). But apparently nine hours in a Chevy Malibu is the price you have to pay these days if you want Congress to hand you $18 billion. (If you only want $13 billion, you can do the trip in a Ford Escape, and if you can make do with just $7 billion, you don't even have to say what you're driving, as long as it's a hybrid.) After all, the government is trying to be responsible with taxpayers' money now; lawmakers won't just write a check to every big shot with a company plane who swings through town -- this ain't October anymore.

So the heads of the Big Three automakers were back in town Thursday, having learned a crucial lesson from last month's failed effort to secure billions and billions of dollars in federal aid -- to wit, they needed some vague idea what they plan to do with the cash once they get their hands on it. And also, ix-nay on the orporate-cay ets-jay. Chastened by just about everyone who watched their first attempt, the CEOs promised to cut their multimillion-dollar salaries to $1 a year, start flying commercial and -- less symbolically -- overhaul their product lines, ditching the gas-guzzling SUVs they've been making for years in favor of smaller cars that people actually want to buy. (General Motors told Congress it's thinking of parting with the Hummer line and will do the same with Saab and Saturn; Ford CEO Alan Mulally boasted that his company sold Aston Martin, Jaguar and Land Rover and may spin off Volvo, too.) Their strategy thus revised, the car companies felt comfortable enough to up their asking price significantly, from $25 billion the first time to $34 billion -- and possibly more -- this week.

The hearing, in the Senate Banking Committee, was a strange display from the Big Three -- a combination of a shameless grovel for money and a not so veiled threat that a second Great Depression would hit if they didn't get it. The firms can't survive without cash, they told the panel. "We are here because of the financial crisis that started in 2007 and accelerated at the end of the second quarter of 2008," Chrysler CEO Bob Nardelli said. The slump meant Chrysler lost $16 billion as customers opted not to buy new cars. "With such a huge hit to our sales and revenue base, Chrysler requires the loan to continue the restructuring and fund our product renaissance."

Actually, the CEOs were less alarmist than some of the other witnesses. Moodys.com chief economist Mark Zandi told the panel that the costs of not bailing out the car companies -- and letting them go bankrupt -- would be far, far more than $34 billion. "It's not even in the same universe," he said. United Auto Workers president Ron Gettelfinger said there wasn't much time to dither: "I believe that we could lose General Motors at the end of this month." And if Detroit goes under, the witnesses agreed, the rest of the country won't be in such good shape itself -- suppliers could also fail, whole local economies could fall apart, the government could find itself handling warranty claims on all the Jeep Cherokees out there.

The problem is that Congress -- having already dumped $700 billion onto Wall Street a few months ago, only to see most of it used to buy shares in banks rather than to vacuum up the toxic assets that sparked the financial crisis -- isn't necessarily inclined to move quickly on yet another big corporate bailout. "I don't trust the car companies' leadership," said Sen. Chuck Schumer, a New York Democrat. "I worry that, if they're left on their own, they'll be back a short time later asking for more, and we won't be better off. To hand money over with vague, unenforceable promises without an enforcement plan for viability isn't good enough."

Republicans were even more skeptical. The conservative base hates the idea of bailing out failing companies -- though it's hard not to wonder if part of the opposition has to do with the fact that these particular failing companies have pretty good contracts with union workers. People in Tennessee "have a tough time thinking about us loaning money to companies that are paying way, way above industry standards to workers," said Sen. Bob Corker. Of course, the UAW already announced that it would let automakers suspend payments into a healthcare fund for retirees, killed a program that paid laid-off workers most of their salary, and agreed to let management reopen negotiations on a contract signed just last year. Still, with Congress already girding for a fight over "card check" legislation that would let workers organize without a secret vote, expect to see Republicans try to lay down some markers about labor during the bailout debate.

Unions aside, it was pretty easy to see what the popular move for GOP lawmakers will be. "The strength of the American economic system is that it allows us to take risks, to create, to innovate, to grow, to succeed and sometimes to fail," said Sen. Richard Shelby, a Republican from Alabama (which happens to be the home of Honda, Hyundai and Mercedes plants, making Shelby a little less worried about the Big Three's viability). "Every time government endeavors to alter any of these dynamics, it undermines and distorts the forces at work in all of them." On the other hand, Utah Republican Bob Bennett was doing his best to become a corporate matchmaker, which doesn't exactly fit orthodox free-market philosophy -- at one point, he threatened to make Chrysler and G.M. merge as a condition for getting federal loans.

Democrats sounded a little more open to spreading some wealth around to the car companies, though it's not clear whether the money would come out of the earlier $700 billion bailout, out of existing funds to help Detroit shift to making greener cars, or out of a new program. While the Big Three came in for plenty of chiding Thursday, the main target of committee chairman Chris Dodd's wrath was actually Treasury Secretary Hank Paulson, and the bungled way the Bush administration has handled the bailout funds Congress handed over just a couple of months ago.

"It seems to me that the requests being made by the automobile industry, while large by any measure, are modest in comparison to what this committee has lately witnessed in the financial sector," Dodd said. "If we're going to insist on reforms by the auto industry as a condition of receiving federal funding, we ought to do the same for the financial companies."

By the end of the nearly six-hour hearing, you could already see the outlines of a deal emerging, just based on the questions and remarks from the committee members -- the auto companies would get at least some of the money they want, with a lot of federal monitoring to make sure they're not wasting it (or shipping it overseas to expand their foreign operations), and sometime next year, everyone would reconvene to assess the situation again. Nearly half of the Republicans on the banking committee are lame ducks, which might mean they feel free to vote for a bailout if they think it's actually good policy, regardless of what the GOP grass roots says. Likewise, Democrats show little inclination to make the nation's economy any worse before Barack Obama takes office next month. The transition team has tried hard to stay out of the bailout fight, publicly at least, but Obama indicated that if the Big Three can come up with decent plans for how they'll use the money to stay solvent, he'd be for it.

Even if Congress works fast, though, and manages to hammer those broad concepts into legislation, it's hard to say whether it would be quick enough to make a difference before Detroit goes under. All those years of pitching customers 0 percent financing to buy enormous vehicles they didn't need is finally catching up with the American auto industry. What Washington has to weigh, and fast, is whether they've really learned their lesson this time.