Who wants to visit Saddam's house?

The Iraqi president does his best Darth Vader imitation in HBO's miniseries "House of Saddam." 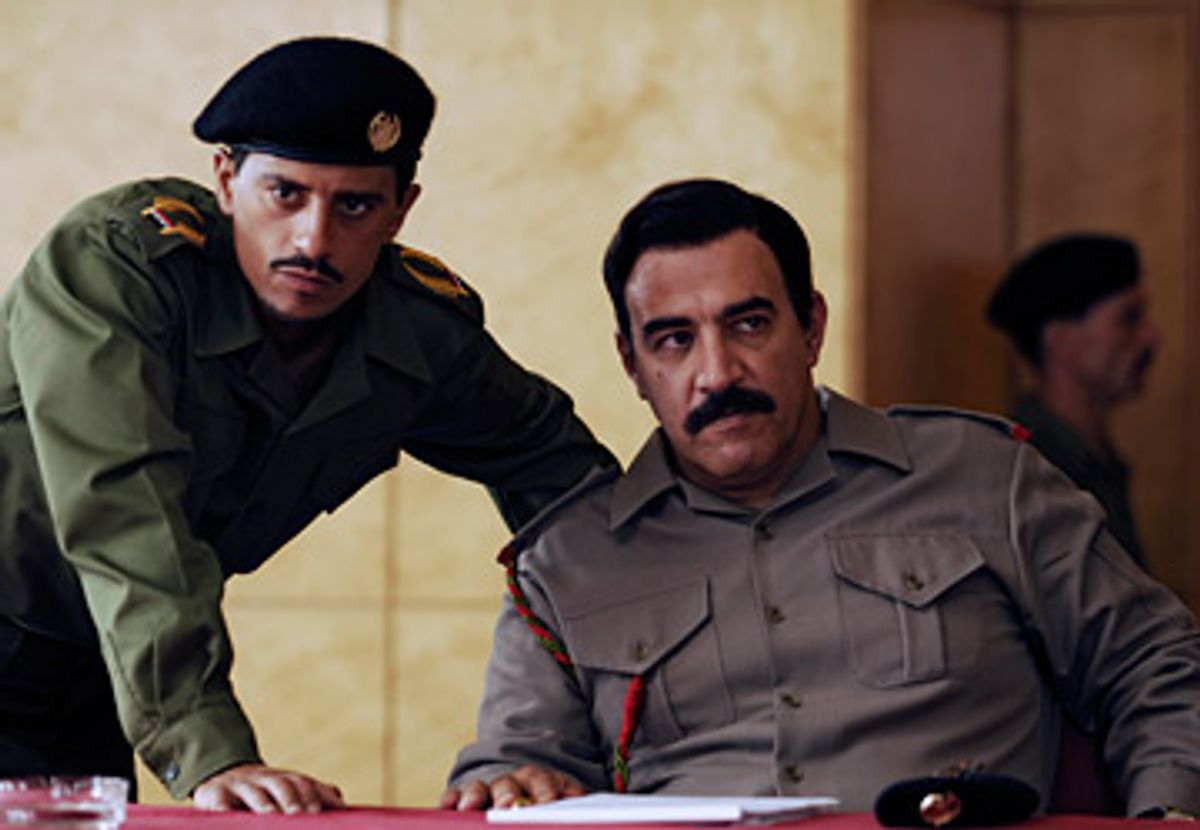 "The man who can sacrifice even his best friend is a man without weakness. In the eyes of my enemies, I am stronger now." ­  -- Saddam Hussein in HBO's "House of Saddam"

Imagine the "Star Wars" trilogy, minus the good side of the Force. Take out those whimsical but inspiring scenes between Yoda and Luke on Dagoba or the colorful insults and witty banter of Han and Leia on Endor, and replace it with nothing but Darth Vader, striding menacingly through the halls of the Star Destroyer, choking the life out of one general after another.

Now remove this very dark picture from the realm of fantasy and place it in a historical context, and you've got HBO's four-hour miniseries "House of Saddam" (premieres 9 p.m. Sunday, Dec. 7), in which bellowing tyrant Saddam Hussein seizes power, sniffs out every whiff of dissension within his ranks, and rules with a twitchily paranoid iron fist. Hussein smells opposition everywhere ­ among his trusted friends, throughout his country's populace, in the governing bodies of neighboring countries, in the drawl of a loathed U.S. president, ­ and he doesn't hesitate to do everything in his power to stomp it out. Those who tell him his actions are reckless and ill-considered inevitably end up with a loaded pistol pressed to their temple, begging for their lives and pledging undying loyalty to their malevolent leader.

Yes, we knew this story wouldn't be filled with puppies, rainbows and butterflies. But even so, witnessing every ugly twist in Hussein's long and arduous path to self-destruction is more grueling than you'd expect, in part because this script doesn't paint Hussein in very many shades other than the pitch black of pure evil. Even when Sajida (played by Shohreh Aghdashloo from "House of Sand and Fog" and "24"), Saddam's first wife, parades his daughters and  grandchildren into his quarters and tearily confronts him about his latest murder of a perceived traitor, the president appears unmoved. "Here he is, children. Your hero father." Hussein stares at her stoically. "Adnan was your friend! He loved you and you needed him! Now look who you are left with, men who are nothing but afraid of you!"

"Sajida, go shopping," Hussein says, finally. We don't see the slightest hint of second-guessing or self-doubt within the man. His wife leaves, and the president briskly tells his men, "At this meeting of the Arab League, nothing can be left to chance!" Dum dum dum, dum, da dum, dum, da dum!

With the deep, imposing voice of Vader himself, it's tough for Igal Naor, who plays the Iraqi leader, to avoid making the man look like a cartoon. Although he embodies the tyrant's imposing nature and his temper with an admirable degree of restraint, we rarely see even a glimmer of mixed feelings in his eyes. The only vaguely human glimpses we get of Hussein come at the very beginning of the story, when his children are young, and then again at the end, when his fate and the fate of his sons has been sealed.

There is one scene, early in the first hour of the miniseries, that offers a rare look at the ideals that fueled this despot's rise to power. Hussein and his young son are hunting rabbits in the desert, and they stop for a minute on a high perch to take in the vast landscape spread out before them.

Hussein proudly tells his son, "Look around you. The land between two rivers. The first great armies and empires were founded here! Do you know the first laws were written here? We have the birthplace of civilization beneath our feet. We will make it great again, you and I! We are lucky men. We have a land to die for."

"Father, I'm hot," his son responds, and you half expect Hussein to push him over the cliff on the spot.

"Have you heard a word I've said? You are your mother's son. Of course you're hot! We are in the desert! Drink some water!" Saddam shouts at him, and storms off. But we don't see Hussein raise a hand against him; his stepfather beat him, and he refuses to follow the same path. (Murdering your closest confidants in cold blood is one thing, but smacking your son across the face is an entirely different matter.)

But this grumpy idealist is soon replaced by a suspicious, soulless lunatic. And while that may be the most realistic portrait that could possibly be painted by the filmmakers, who interviewed scores of people who knew the man well, it doesn't make for the most vivid or entertaining story. Instead, the narrative feels flat: Saddam seethes and schemes, his family weeps and worries, his associates flinch and shiver and exchange weary glances.

Even one of the more interesting subplots, the defection of Hussein Kamel (Amr Waked), Saddam Hussein's son-in-law and minister of military industries, is tackled without a particularly poignant exchange in the mix.

Kamel makes a hasty decision to flee to Jordan, leaving his wife (the president's daughter) shocked and not all that optimistic about their future prospects: "All this time you worked with my father, and you still think you can win? You know nothing about him." She's right, of course. Kamel is doomed.

But everyone is doomed in this sad tale. And even with plenty of built-in drama, it all plays out in the most predictable manner imaginable. Forget the princess and the guy with the light saber; ­ we just need a few reflective moments and a little stirring dialogue along the way to keep us engaged. Instead, "House of Saddam" is more like a house of horrors, governed by a sadistic but not all that creative maniac. Only a masochist would consider stopping by for a visit.