Spend, Obama, spend! And save jobs

The first thing Obama should do is use federal funds to keep public employees from joining the swelling ranks of the unemployed. 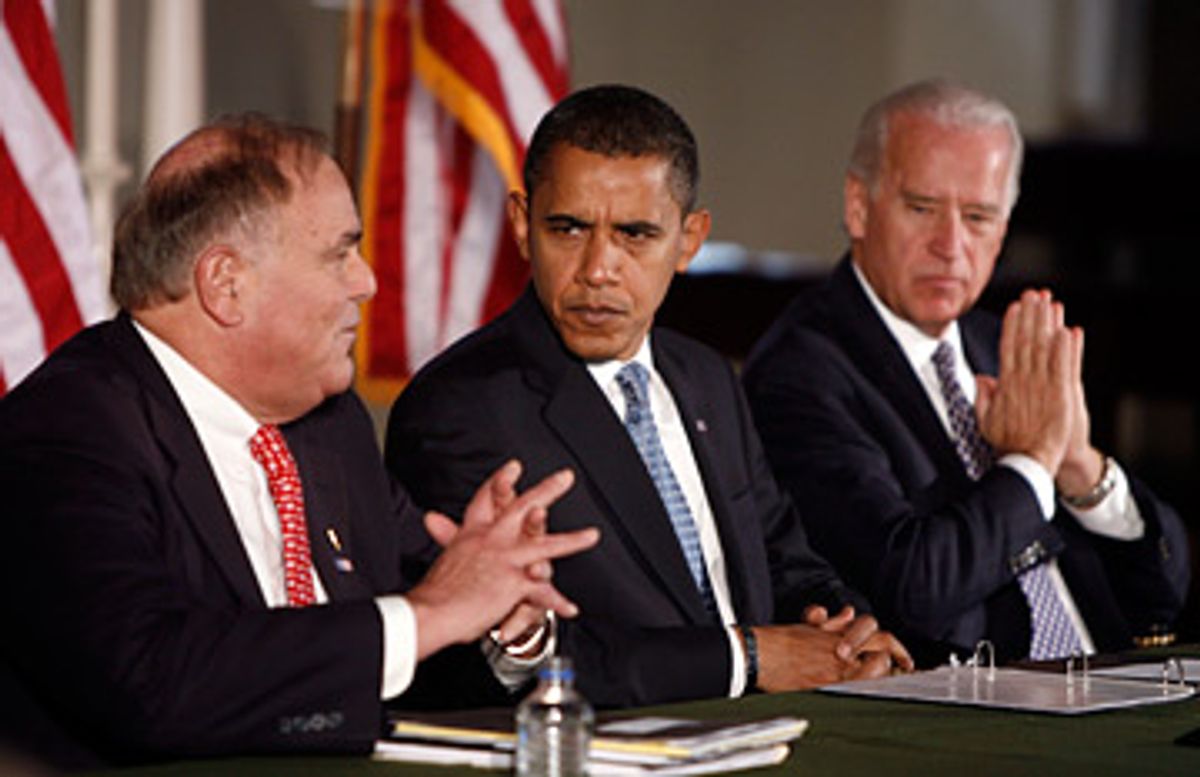 With Americans losing their jobs at a rate not seen for more than three decades, Barack Obama must determine very quickly how his administration will direct hundreds of billions of dollars to achieve the most powerful economic effect. In his weekly address on Saturday morning, he cited the catastrophic loss of more than half a million jobs in November alone as the reason for launching the biggest public works program since the Eisenhower administration -- everything from improving schools and hospitals to rebuilding roads and bridges. "We will create millions of jobs," said Obama, "by making the single largest new investment in our national infrastructure since the creation of the federal highway system in the 1950s."

But many of the new infrastructure enterprises that he has promised would still require lengthy planning -- and even repair projects that have awaited funding will need months to get going. How can Obama stop the cascade of unemployment from driving us into a depression?

His first priority should be immediate, substantial financial aid to the states and cities that are now laying off thousands of public employees and preparing to fire thousands more. Rapid, generous assistance to localities would not only keep hundreds of thousands of workers employed, but would simultaneously advance national priorities in health, education, infrastructure, and energy efficiency.

Fortunately Obama and his advisers understand the importance of what used to be called "revenue-sharing" or "counter-cyclical assistance." Peter Orszag, his nominee to direct the Office of Management and Budget, co-authored an important paper in 2001 urging increased government expenditure as the most effective means to stimulate a lagging economy. So when the president-elect spoke at the National Governors Association meeting last week, he pledged swift action to help the states but offered no specific response to the governors' plea for at least $160 billion in aid for the coming fiscal year.

Together with Congress, he should provide that much and more â€“- because it would be the best single investment that the federal government could make right away â€“- and because the states and cities can do so little in this climate to help themselves.

At the most basic level, the president can use a tool that is forbidden to governors, namely deficit spending. The constitution of almost every state requires a balanced budget every year, and such provisions have been rigorously enforced ever since the last widespread fiscal crisis of the Seventies.

When their revenues decline during a recession, state and local officials cannot borrow operating funds to boost economic demand. In fact, they are forced to reduce spending, cut jobs, and perhaps increase taxes, all of which only make a bad situation worse. As state and local budgets fall into deficit, moreover, the borrowing capacity of those governments also declines â€“- which forces them to postpone or cancel capital projects. That too, reduces employment, revenues, and demand. At the same time, as more and more families lose income and fall below poverty, the demand for state services such as Medicaid rise.

That vicious spiral is gaining speed now across the country, with budget shortfalls in almost 40 states, and deficits exceeding a billion dollars in more than a dozen. In Ohio, whose economic downturn preceded the rest of the nation, the state predicts the most dramatic shortfall in revenues in more than four decades. In New York, where the turmoil on Wall Street has profound local impact, the state and city expect to impose ten billion in cuts over the next two years. In California, Arnold Schwarzenegger is facing an economic calamity reminiscent of "The Terminator"'s blasted future, with deficits soaring past $30 billion.

All of those numbers far exceed the usual problems confronted by the states when the economic cycle heads downward. The housing bust places especially heavy stresses on state and local governments because when home values decline, so do property tax revenues â€“- and when people stop buying new homes, sales taxes, mortgage taxes, and all of the other typical revenue sources plummet as well. What would ordinarily be a bad time for the states has turned devastating.

Choices made by politicians in these circumstances inevitably inflict damage that outlasts the period of recession. When college tuition is increased or class sizes expand, the effects on student achievement and dropout rates last for years. When mass transit fares rise and new routes are cancelled, the transition to greener transportation systems is postponed. When hospitals reduce staff and close clinics, the goal of universal access to health care recedes still further. The federal government must do everything in its power to minimize the harm to important national objectives and to the most vulnerable people in society.

For Obama, however, the more immediate consequence of ruinous state budgets would be to frustrate the effects of any new stimulus program. Even if federal spending vastly increases next year, the economic impact will be greatly diminished if states are raising taxes, dumping employees, and curtailing procurement from local businesses.

The best way â€“- and perhaps the only way â€“ to forestall disastrous unemployment is to stop the budgetary bleeding in the states. That is why Congress should be prepare a bill providing immediate emergency relief to the states, ready for signature on January 20, 2009 -- and why Obama's first act as president should be to sign it, and start sending checks.