Some of our favorite authors weigh in on the best reads of 2008.

By Compiled by Abby Margulies 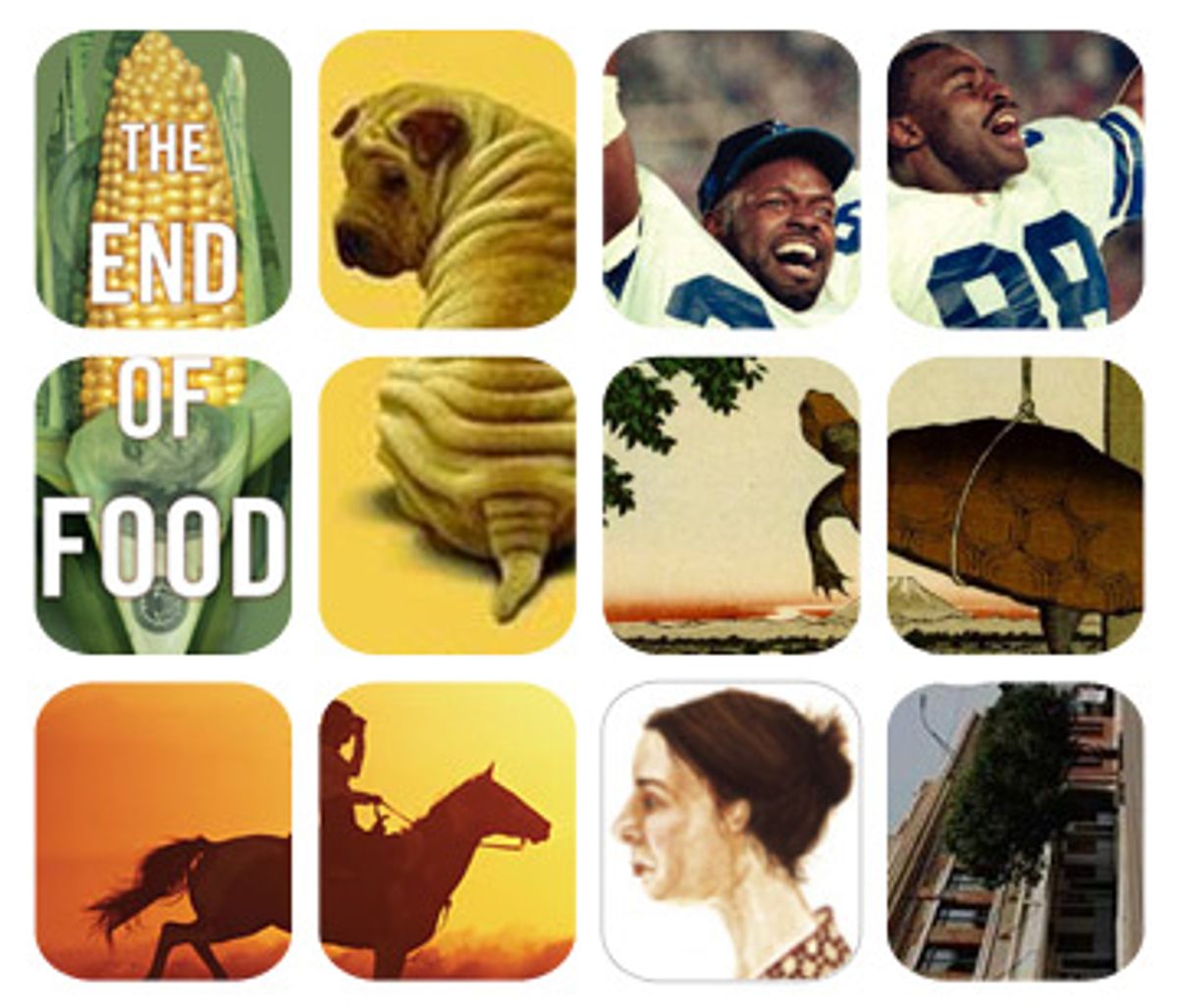 Yesterday we revealed our favorite books of 2008. Today we've asked a selection of our favorite writers to chime in and tell us what books got them excited this year.

Michael Pollan, author of "In Defense of Food: An Eater's Manifesto"

Try as I might to read about other topics, books on food seem to find their way to my bedside table, and 2008 brought a couple of exceptional ones: "Stuffed and Starved" by Raj Patel and "The End of Food" by Paul Roberts both explore the international dimensions of the food issue, and helped me to understand how decisions made about food and farming (and energy) in the U.S. affect eaters all over the world.

Although Henry Alford is a gay New York man and I'm a straight Los Angeles woman, I consider Henry a kind of soul mate, not to mention dear friend and exquisite human being. I say that because hilarious writers are rarely exquisite human beings in practice. Henry is, and his new book reflects both the hilarity and the exquisiteness. "How to Live" extracts wisdom (and some flotsam, duly noted) from an array of American elders, including a startlingly fresh and accurate analysis of my Chinese father (and our relationship) that ... well, reading Henry's account was like a wonderfully loving and in the end restorative chiropractic adjustment. For old people and anyone who has ever known an old person (and you will eventually!).

Malcolm Gladwell, author of "Outliers: The Story of Success"

My favorite book of the year was Stephen Hunter's newest, "Night of Thunder."  I'm a fanatical reader of thrillers and Stephen Hunter has always been one of my favorites. This book, though, is his best in years -- unexpectedly funny and bitchy in addition to all the usual thrills and high jinks.

I absolutely loved the new novel "Ms. Hempel Chronicles" by Sarah Shun-Lien Bynum. The book is divided into eight episodic chapters -- almost like short stories -- following Beatrice Hempel, who's a 20-something middle-school English and history teacher in New York. While this might not sound like inherently riveting material, Bynum is a wonderful, practically magical writer and she depicts Ms. Hempel's life in such a hilarious, poignant, quirky way that it's irresistible. The details are all completely perfect -- the tension of watching a dorky girl do a magic act during a talent show, the mood inside the bus on a field trip, the camaraderie among teachers -- and it all rings so true that I want to give this book to everyone I know who has ever taught. (Though I should add that the book, while elegantly written, also frankly discusses subjects such as, say, Ms. Hempel's reluctance to have anal sex with her fiancé, so it's not G-rated.) This is an unusual novel in tone, structure and focus, which I see as a virtue. I was charmed.

I grew up loving books about hobbits, horses and dogs (Walter Farley, Alfred Payson Terhune), and while I've stayed a faithful fan of fantasy and science fiction, somehow I seem to have drifted away from the horse genre. Reading Molly Gloss' novel "The Hearts of Horses," about a 19-year-old bronco buster, Martha Lessen, and a ranching community in Oregon in 1917, was one of those reading experiences that made me feel the way I did when I was a kid and reading certain books felt more urgent than remembering to breathe. I'm a huge fan of Gloss' other books, but "The Hearts of Horses" is the one that I'd recommend to start with. It's beautifully written, the characters are heartbreakingly real, and it fleshes out a piece of history that I know relatively little about.

And because I can never just recommend one book, I'll also note that this was a terrific year for graphic novels. I loved the new "Scott Pilgrim" by Bryan Lee O'Malley, Matt Forsythe's beautifully produced, weird and wordless "Ojingogo," and Lynda Barry's "What It Is."  For short story collections, I can't stop recommending Joe Hill's "20th Century Ghosts," and for young adults, there's a bounty of riches: Ysabeau Wilce's "Flora's Dare"; Suzanne Collins' page-turning dystopia "The Hunger Games"; the second volume of M.T. Anderson's "Octavian Nothing"; and Margo Lanagan's gorgeous, unsettling fairy tale, "Tender Morsels."

Daniel Handler (aka Lemony Snicket), author of "A Series of Unfortunate Events" and "Adverbs"

Campbell McGrath's "Seven Notebooks" has everything you want in lit -- the passion and the distraction, the studied goofs and the careless formalism, the sentiment and the cynicism, the ebb and the flow and the herky-jerky dance, the anecdote and the epic and the way memory breaks your heart and throws you a lifeline, and two hard-boiled eggs. I had to read more than 300 books this year -- long story -- and this is the one that helped me with all the others. What do you need help with? "Seven Notebooks" will take care of that.

Rob Walker, author of "Buying In: The Secret Dialogue Between What We Buy and Who We Are"

I'm always behind on reading contemporary books that aren't directly related to my job, and this year that was particularly true. But I ended up doing a lot of reading on airplanes over the summer, and it was on a plane that I started David Shields' newest book, "The Thing About Life Is That One Day You'll Be Dead."

I started a little tentatively, because I wasn't really in the mood to read about mortality -- but when would I be? Anyway, it turned out that this is a book you can't know you want to read until you're reading it. And then you realize it's exactly what you wanted and needed, whatever's going on in your life. Or at least that's how it worked on me. I'd planned to finish it on the trip home, but ended up doing so in my hotel room.

I was already a fan of Shields' work; he's as good as anybody at extracting surprising insights from topics like sports and pop culture. What impressed me most here was his handling of what I guess must be the most serious subject I can think of, with a touch that entertained without trivializing, and that delivered wisdom without resorting to sentimentality. It's a very skilled piece of writing. I admired it, and I really enjoyed it, too.

"Olive Kitteridge," Elizabeth Strout's astonishing collection of 13 linked stories, is tough and hilarious, unapologetic and beautiful. Centered around one woman's life, this book could be described as "character-driven," but that term might make it feel small, which it isn't; it's big and packed, in fact. Strout has the talent, patience and insight to let her imperfect characters tangle with one another in real, human ways over time. Back in the 1970s-'80s golden age of American fiction, people didn't have to continually convince other people why fiction was essential, and a book like "Olive Kitteridge" would have more easily found the audience it deserves. In our era, a non-fiction-heavy, news-dominated period in which fiction is often unfairly seen as a languishing specialty item, writers like Elizabeth Strout remind us of how much we need it in our lives.

Steve Almond, author of "(Not That You Asked): Rants, Exploits, and Obsessions"

Chuck Klosterman's debut novel, "Downtown Owl," is shockingly good. I was expecting it to be smarty-pants and emotionally pale. But Klosterman really understands his people, he cares for them, and his cleverness is almost always in service to the story. This is going to sound like heresy to some, but the best moments of this minor masterpiece read like Kurt Vonnegut, if he'd devoted himself to the obscure longings and miseries of small-town North Dakota.

Steven Johnson, author of "The Invention of Air"

I read a galley copy of Oliver Morton's "Eating the Sun: How Plants Power the Planet" very quickly a few months ago and was very impressed with it then. But when I went back to read it more slowly last month, I realized what a masterpiece the book was: a kind of epic poem to the power and potentiality of photosynthesis.

Oliver and I met years ago and have kept in touch loosely since then,  but this book is so great I'd be singing its praises even if we were arch rivals. "Eating the Sun" is many things. It's a story of scientific discovery told with great clarity and narrative drive, and it's a mind-expanding rumination on life, energy and the future of our planet. The book has descriptions of natural and semi-natural landscapes that are just exquisite. And it's a refreshingly optimistic call-to-arms that talks about our climate crisis as something that is both immense and potentially manageable, making the most compelling case for radical innovation in solar energy that I've read to date. I hope there are Obama people who are reading this book right now -- it should be required reading for anyone entering the White House, right up there with the Michael Pollan and the Doris Kearns Goodwin. But those of you who aren't currently going through the screening process should pick up a copy too; it's still early, but I think this may be my favorite book of 2008.

Lydia Millet, author of "How the Dead Dream"

I loved Joy Williams' novel "The Changeling," reissued after 30 years by the tiny but valiant Fairy Tale Review Press. Williams is a brilliant writer and "The Changeling" (no relation to the movie of the same name) is an explosive, strange and mythic showpiece of that brilliance. It had no business being out of print for so long. A young, drunken mother and her baby are separated in a plane crash, and thereafter the mother, Pearl, spirals into oblivion on an island of increasingly feral children -- never quite sure the baby who was returned to her, and now plays among them, is her own.

A single page of Don Paterson's collection of aphorisms, "Best Thought, Worst Thought," contains enough philosophical conjecture, elegant bile, and cold hard truths (or facile lies) to power three regulation-length novels. The misanthropy on display here alternates with humor, or simply merges with it ("You've made a blog ... Clever boy! Next: flushing"), making for irresistible sampling. Some of the aphorisms read like surreal microfictions ("Sex is better in dreams as the prick has an eye"), others like entries in a journal intime. Just when he has you chuckling, he'll whip out a line that reads like a freshly translated fragment from a distant epoch ("Imagining the worst is no talisman against it"). You get the sense that Paterson both stakes his life on every sentence and wants to distance himself from it almost before the ink has dried, and these impulses give the book its perfect rhythm. As he puts it, "A style is a strategy of evasion."

"Boys Will Be Boys: The Glory Days and Party Nights of the Dallas Cowboy Dynasty" by Jeff Pearlman is the sportswriting equivalent of reading Neil Strauss' "The Dirt" -- it's totally insane, completely plausible, and "gossipy" in the best possible way. Some of the content skews unnecessarily negative (I can't imagine anyone in the Cowboy organization not named Troy Aikman who wouldn't hate or dispute this book), but the reporting is dogged and the stories are more entertaining than any of the fictional moments in "North Dallas Forty." By far the fastest 416 pages I read in 2008.

MORE FROM Compiled by Abby Margulies