An indie chick, her dog and the 2008 depression

Will Oscar notice Michelle Williams' pitch-perfect performance as the dead-broke slacker gal who loses her dog in the wrenching, intriguing "Wendy and Lucy"? 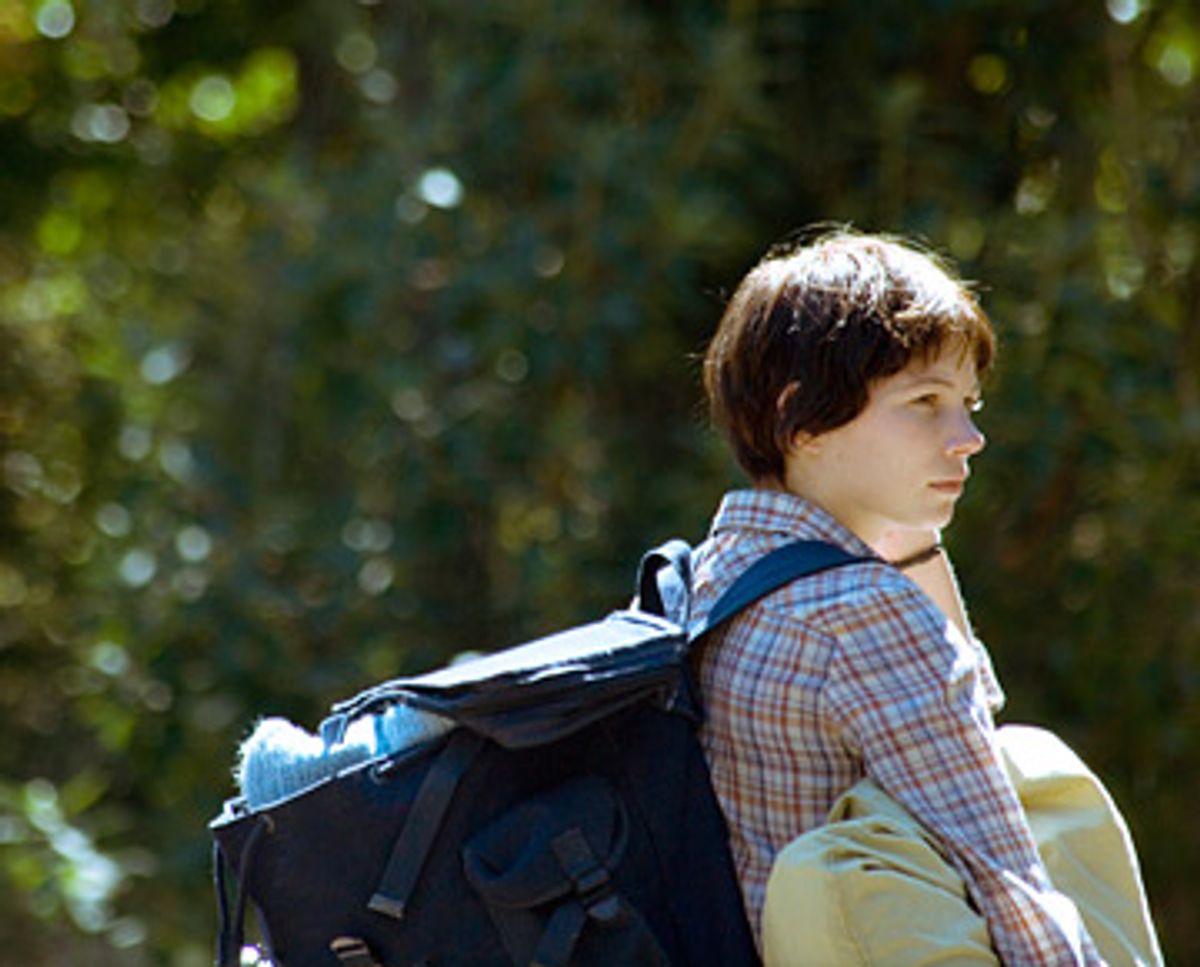 Michelle Williams in "Wendy and Lucy."

When Kelly Reichardt's delicate, slow-motion film about two old friends on a camping trip, "Old Joy," appeared on the festival circuit in 2006, I assumed at first that Reichardt must be a man. "Old Joy" seemed so attuned to a specific subgenre of male experience -- to the rueful sadness and silence that can build itself up, like an implacable wall, between two guys who shared a period of Dionysian youthful excitement and have since grown away from each other -- that it seemed Reichardt also had to be an ex-hipster dude on the cusp of middle age.

Maybe she is most of those things, but Reichardt is only a dude in the loosest, most colloquial usage of the term. Although "Old Joy" seemed to come out of nowhere as one of '06's critical fave-raves, Reichardt was actually an indie-scene veteran who had worked on Hal Hartley's "The Unbelievable Truth" in 1989, directed her first feature in 1994 (a blend of Lynchian crime drama and Jarmuschian road movie called "River of Grass"), and made several experimental shorts after that. With her new film, "Wendy and Lucy," which premiered to widespread acclaim at the Cannes and New York festivals, Reichardt is suddenly a recognized auteur, albeit one who makes movies on next to no budget in the Pacific Northwest, movies most Americans will never hear about, let alone see.

Opinions seem split among movieland cognoscenti on "Wendy and Lucy," which features a borderline name actor in Michelle Williams and is clearly a more conventional, plot-centric film than "Old Joy." (That's not saying a lot.) Maybe my taste is more mainstream than I pretend, because I liked it better. What sticks with me from "Old Joy" is that scene where the two guys have finally found the hot spring, deep in the woods, and are having their not-quite-homoerotic joint soak, which won't quite lead to healing between them, and then Reichardt shows us a long, lingering shot of a banana slug climbing up a leaf. I mean, it was beautiful. But it was also a banana slug climbing up a leaf, and I felt like the movie was abandoning all pretense of ever getting anywhere in favor of a dazed, stoner National Geographic moment.

Now, I can defend dazed, stoner National Geographic moments, up to a point. I can accept that you just had to ride with the whole Tarkovsky-in-the-hot-tub 'shroominess of "Old Joy" or not, and I did myself, most of the way. But "Wendy and Lucy" requires no such defenses. It's a girl-plus-dog movie -- really! -- rooted in a tender, edgy, wonderful performance by Williams as the titular Wendy, an androgynous creature with a sawed-off haircut who washes up in a downtrodden Oregon town with no money, a dead car and a friendly pooch named Lucy. (I believe the likable canine we see in the film is actually Reichardt's dog and actually named Lucy.)

We learn a few bits and pieces about Wendy, who has apparently been staying with family members in the Midwest and is on her way to a possible cannery job in Alaska, at least until her 1988 Honda blows its final gasket. But she remains an unexplicated character, alone and evidently friendless, clearly a damaged soul but one who trudges resolutely forward from one calamity to the next. Here's one thing to say: If 2009 really brings with it the second coming of the Great Depression, then Reichardt is all set as its cinematic poet laureate. As Wendy moves among the train-hopping punk kids, can-collecting homeless people, deranged bums and marginally employed service-sectorites of this particular American nowheresville, the filmmaker captures a nearly operatic range of defeat and desperation.

When Wendy gets picked up for shoplifting in the supermarket, Lucy is left tied up outside. When Wendy finally finagles her release, many hours later, and laboriously makes her way back to the store -- Reichardt pitilessly depicts the constant humiliation of living in exurbia without wheels -- the dog is gone. No one's seen her, no one knows anything. Aided by a kindly, 60ish security guard (Wally Dalton), and threatened by an especially scary homeless lunatic (played by indie-film renaissance man Larry Fessenden, who also produced the film), Wendy launches herself on a "Bicycle Thief"-style odyssey in search of her missing pooch, all the while fighting against the realization that she has fallen nearly as far as an able-bodied, young, white American without a methamphetamine habit can fall.

I shouldn't say anything more, really. But don't worry too much if you're the tender-hearted sort. Reichardt is a tremendously conscientious filmmaker, and not out to torture the audience. Yes, this is a fraught and agonizing story, but the way it ends, although heartbreaking, is absolutely right.

It's dimly possible that bizarre and fortuitous circumstances that don't have much to do with "Wendy and Lucy" -- its unexpected social relevance, for instance, and Williams' relationship to a recently deceased celebrity -- will bring the film some attention, and put Williams on the outer edge of Academy Award possibility. It really couldn't befall a more deserving movie, or a more complicated performance. While I think there's plenty of didactic, Dickensian intention behind "Wendy and Lucy," it isn't leading toward some hackneyed "reveal" or canned moment of redemption.

Instead, Reichardt seems to be challenging us to ask ourselves questions that the occluded, stricken, mysterious Wendy can't or won't ask. Questions like: How did we get here? And what do we do now?