With over 4 million expected for the inauguration, city services will be taxed to the max. But bar owners and locals with digs for rent hope to make bank. 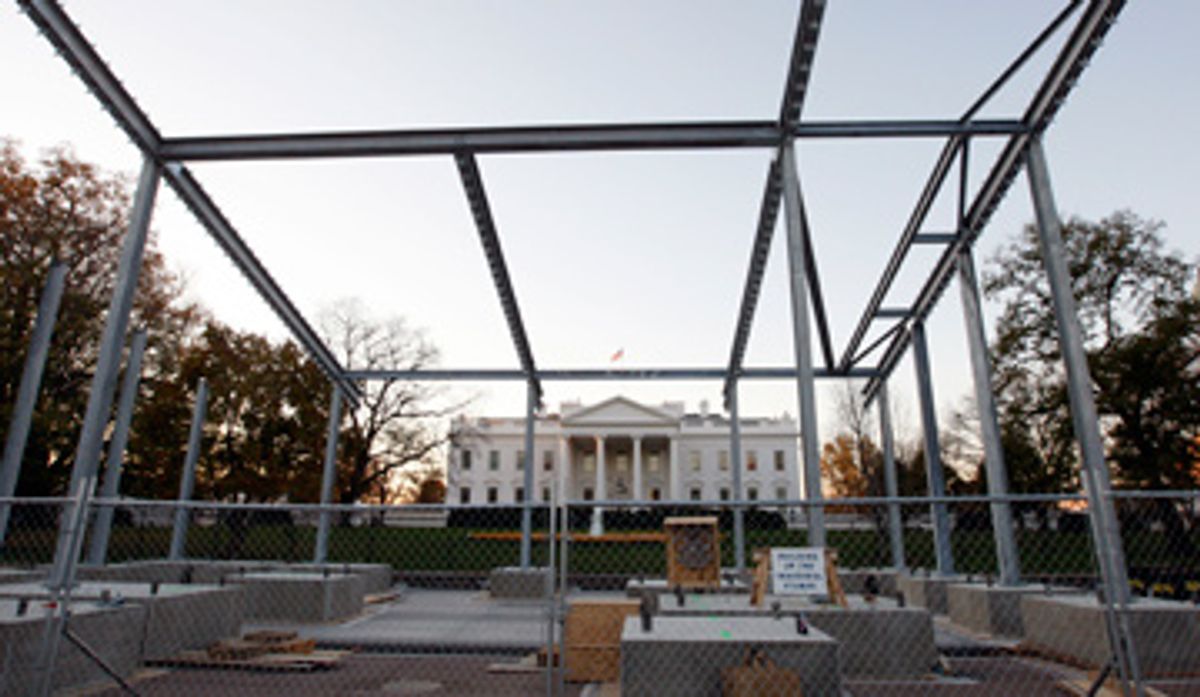 Hotel rooms for Barack Obama's inauguration are all booked, it's true. And yes, city officials expect up to 4 million people to flock to town next month to celebrate the first few moments of the Obama era. But even with an inaugural housing crunch, it's hard to fathom exactly what made the owners of a house in the Virginia suburbs -- a mile and a half away from the nearest subway stop -- think someone wanted to pay $10,000 to stay there for the week. In the District itself, people have gotten even more ambitious -- how else to explain the $40,000 townhouse rental listed Wednesday?

More than a month before Obama is sworn in, D.C. is in the grips of inaugural madness -- and it goes beyond the attempted price gouging on rentals. The city just decided to let bars stay open until 5 a.m., three hours after the usual last call, for the entire weekend before Jan. 20, sparking fights between neighborhood activists, bar owners and Congress (which can never resist the urge to meddle in District affairs). The mayor suspended all the usual rules for property rentals for the week (and won't charge local taxes on any rental revenue), setting up a legal free-for-all on the housing front. Planners are freaking out about what to do with an estimated 10,000 buses that will ferry people into the city for the ceremony (enough, if lined up end-to-end, to circle the entire Capital Beltway); there's nowhere to park them all, and not many good ways to get people from wherever they park to the inauguration. The folks who run the Metro system are basically just giving up -- they want anyone who's coming from less than two miles away to walk.

When public transportation officials start telling people not to take public transportation, you know things are getting weird. Washingtonians don't easily panic over crowds. It's not as if the city has never dealt with big events before; after all, these presidential inaugurations do happen, like clockwork, every four years, and no D.C. weekend goes by without at least a few streets closing for a protest march or a charity walk. Still, the Obama mania seems to be going well past anything the city has experienced before. Officials working for Obama's inauguration committee, which handles the parade and the fanciest parties, say they're confident the city will be ready to handle whatever happens next month. But if anything close to 4 million people turn up -- about seven times the city's population -- it's hard to figure out exactly how it could all go according to plan. By the time Jan. 20 actually gets here, D.C. may be completely crazed.

Mayor Adrian Fenty (an early supporter of Obama's) says the city is expecting 4 or 5 million people to hit the Mall and line Pennsylvania Avenue to watch the ceremony. That would dwarf the previous record crowd, 1.5 million people, who watched Lyndon Johnson take the oath of office. Eleanor Holmes Norton, the District's non-voting delegate to Congress, says people might have to walk miles just to get through security checkpoints. Four years ago, when President Bush was sworn in for his second term, only about 300,000 people came to the ceremony, and many of them still had to wait hours to clear security. This time, the entire Mall will be open, which will probably mean longer lines.

The celebration also threatens to overwhelm D.C.'s budget, in addition to its streets. So far, the federal government has provided the District with only $15 million to cover the costs of the inauguration and any other special event the city hosts in 2009 -- less than the city spent on Bush's inauguration in 2005. Police overtime, cleanup and -- if the weather doesn't cooperate -- snow removal could run the tab far higher. Those worries haven't stopped Fenty from getting into the inaugural spirit himself, though; word is the mayor is planning a big bash with Kanye West for the Saturday before the inauguration. (Nothing takes your mind off a looming financial crisis like singing along to "Gold Digger.")

But the financial bottom line on the mind of most D.C. residents these days is their own. Just about everyone in the city seems to have a plan to rent out their home to guests for outrageous prices. For most of the country, Obama's inauguration might be the end to a very long eight years, but here in Washington, it's turning into a giant get-rich-quick scheme. There are more than 1,000 listings on Craigslist advertising short-term inaugural housing rentals, many asking for prices that defy all the bad economic news (if people are really willing to pay $5,000 or $10,000 to stay in Washington for a week, how bad could the recession be?). No one actually knows whether anyone is getting the prices they're asking for, but when you look online and see your neighbor is advertising his place at $1,000 a night, it's hard not to try to get the same deal yourself. Just ask Fred Thompson -- the one-time Republican presidential candidate is trying to rent out his one-bedroom condo for $30,000.

Except, like most people looking to make serious bucks, Thompson may be dreaming. "I think people have grand illusions of getting rich off this pretty quickly," says Andre Butters, a mortgage broker from Bethesda, Md., whose own get-rich-quick angle is InauguralHomes.com, a new listings service that's been passing out fliers at subway stops to try to drum up business. Having seen what people are actually getting through his site, Butters thinks most of the would-be landlords are going to be disappointed. "I don't think people, for the most part, are going to get what they want. If you have a place that's overlooking Pennsylvania Avenue for the parade route, if you have a penthouse, that's worth $10,000 for the week. But in terms of people living out in Capitol Heights [in the Maryland suburbs] who think they're going to get $5,000 for their property over a three- or four-day period, I just don't think that's very realistic." Most people from out of town have been able to find housing for $200 to $500 a night, Butters says -- the same as a nice hotel might cost, if there were still nice hotel rooms left to reserve.

Lately, officials have started to sound like they don't even want people to show up. In their guidance for the public, inauguration planners in Congress (which technically runs the ceremony) make coming to the swearing-in sound about as appealing as getting an IRS audit.  "Movement will be difficult inside the security perimeter," the guidelines say. "It is typically cold on Inauguration Day -- normally 37° F -- and often wet. Expect to be outside for more than three hours, to stand in line, and to walk for long periods of time." There won't be food for sale, but anyone who comes won't be allowed to bring anything beyond "a small snack." As for bringing the kids to see a moment in history, maybe that's not such a great idea: The cops won't let strollers in. "Extra consideration should be taken when planning to bring infants, young children, the elderly, or anyone with a weakened immune system," Congress says. "A vast majority of attendees will be in standing room sections and should be prepared to be on their feet for several hours."

Maybe that's the solution to all the logistical concerns -- spend the next month scaring would-be visitors into staying home. As the saying goes, it's so crazy it just might work. Sort of like everything else about the inauguration planning so far.