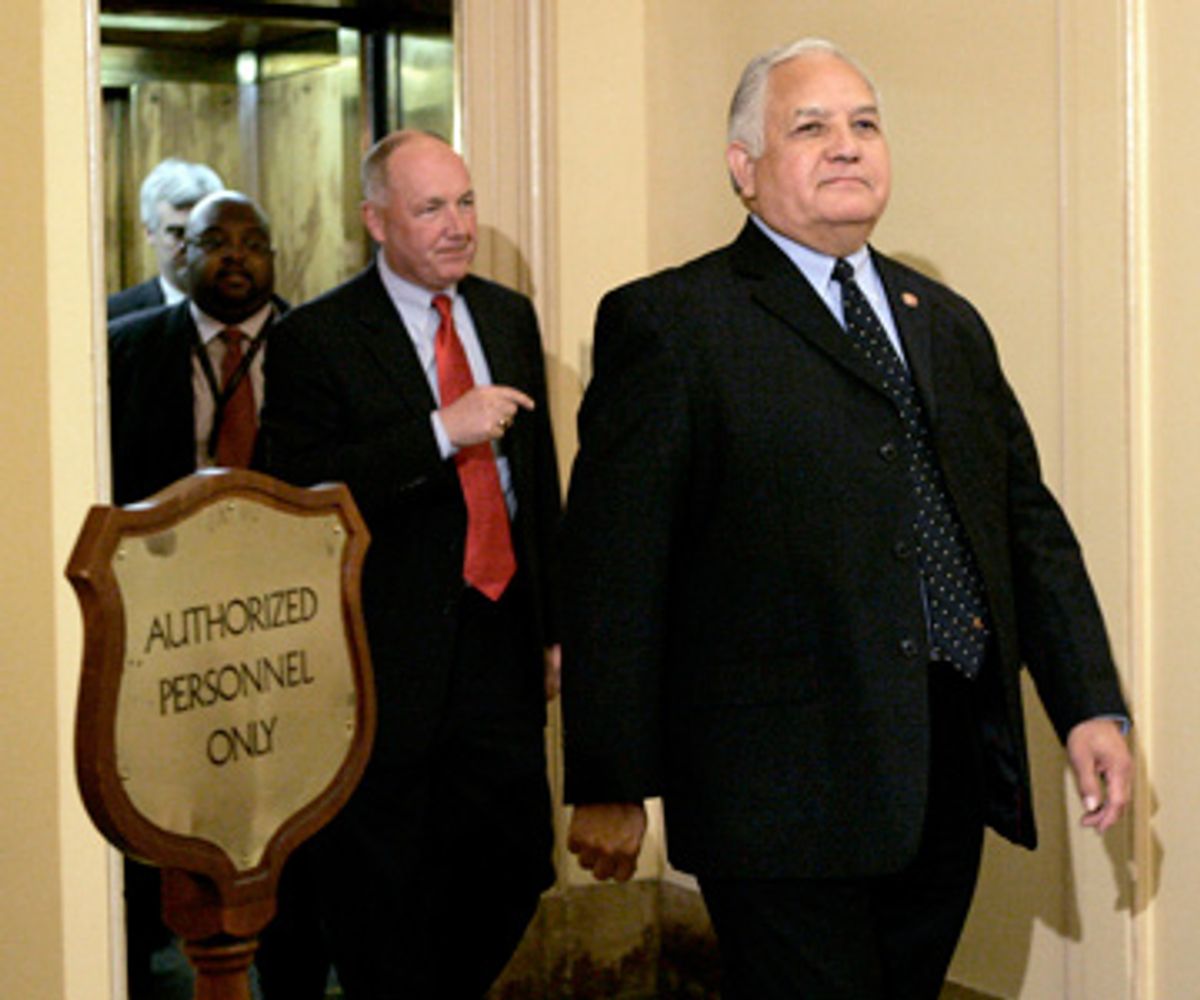 I'm actually relieved that traveling burdens leave me with little time to write much about this story; then again, it essentially speaks for itself and requires minimal commentary (h/t Mad Dogs):

The House Intelligence Committee's top Democrat [Rep. Silvestre Reyes of Texas] said Tuesday he has recommended that President-elect Barack Obama keep the country's current national intelligence director and CIA chief in place for some time to ensure continuity in U.S. intelligence programs during the transition to a new administration. . . .

In an interview, Reyes said he believes that Director of National Intelligence Mike McConnell and CIA Director Michael Hayden should be kept in their posts. Reyes believes they should stay for at least six months, but said the time frame is ultimately a decision Obama must make.

But that was the least of it.  Chairman Reyes -- who was hand-picked by Nancy Pelosi to skip over the equally Bush-enabling Jane Harman to become Committee Chair in 2006 -- also:

said he [] recommended to Obama's transition team that some parts of the CIA's controversial alternative interrogation program should be allowed to continue. He declined to say what he specifically recommended, however. . . .

"There are those that believe that this particular issue has to be dealt with very carefully because there are beliefs that there are some options that need to be available," Reyes said.

"We don't want to be known for torturing people. At the same time we don't want to limit our ability to get information that's vital and critical to our national security," he added. "That's where the new administration is going to have to decide what those parameters are, what those limitations are."

First Amendment lawyers will tell you that anyone who says:  "The First Amendment is important, but . . . " does not actually believe in free speech.  Analogously, someone who says:  "We don't want to be known for torturing, but . . ." is not someone who believes in ending torture.  And note the consummately Cheneyite dichotomy Reyes has adopted between banning torture and staying safe.  Or, as Spencer Ackerman put it, "The chairman of the House intelligence committee just framed the debate as between effective torture and ineffective compliance with the law."  [See the interview I conducted yesterday with Rear Admiral John Hutson regarding how deceitful that claim is].

Here's what is most amazing about this.  While virtually all of the Bush agenda over the last eight years ended up being deeply unpopular and profoundly discredited, it was his foreign policy and intelligence programs (torture, rendition, illegal surveillance, war) which caused the most intense opposition, at least among Democratic voters.  That is a large part of why Democrats just won their second straight national election promising to oppose Bush's policies and to implement "change."  It was the policies implemented and overseen by Bush's Pentagon, CIA and "homeland security" apparatus that caused the most disgrace.  "Continuity" in those areas would be nothing less than a patent betrayal of everything Democrats, over the last two years, told the citizenry they intended to do.

And yet, having watched Obama already announce that he is retaining Bush's Defense Secretary, here we have the top Democrat on the House Intelligence Committee also urging that Obama keep, for "at least" six months, Bush's handpicked Director of National Intelligence (whom Democrats excoriated during the FISA debates for manipulating and, as even Reyes himself noted, outright lying to them) and Bush's handpicked CIA Director (who was, as Obama himself said, the "architect and chief defender" of Bush's illegal NSA spying programs).  Even worse, Reyes is publicly urging that Obama maintain, rather than overhaul, "some parts of the CIA's controversial alternative interrogation program" -- or else we'll all be slaughtered by the Terrorists.

It's worth recalling here that top Congressional Democrats were told, to varying degrees, about the vast preponderance of the most extremist Bush policies at the time those policies were implemented, including torture and illegal surveillance, and, in almost every case, did nothing to stop it, and often actively assented.  The fact that Reyes is recommending these steps this does not mean, of course, that Obama will follow.  Indeed, as Marc Ambinder suggests today, Obama is actively considering several candidates to replace Hayden and McConnell and "is having trouble finding a potential CIA director who lacks politically incriminating links to controversial Bush Administration policies and yet commands the respect of the agency's rank and file."

But, as I've been arguing for several weeks, it is unrealistic in the extreme to think that these Bush policies are going to magically vanish without a major fight now simply because Democrats are in control.  There are many factions in Washington working hard to ensure that these policies remain largely in place, and many of those factions are found at the highest levels of the Democratic Congressional leadership.

In addition to the appearance on this Friday night's Bill Moyers' Journal that I noted yesterday, I'll be on The Rachel Maddow Show tomorrow night (Thursday) to discuss the closing of Guantanamo, the efforts already underway to make it difficult for Obama to do so, and related matters (some of those issues were raised by this excellent piece in Salon a couple of days ago by the ACLU's Jameel Jaffer and Ben Wizner).  I'll try to post the exact time when I know it.

Additionally, Jim Angle of Fox News is doing a report on the John Brennan controversy for Brit Hume's program, and I was interviewed by him at length about that today.  I'll post the date and time of its broadcast once I know it.  It should be quite interesting to see how that ends up being edited and presented.

For a taste of how inane and hysterical some of the discussion of this Brennan episode is on the Right, see this bizarre rant today from "Pajamas Media" -- dramatically entitled:  "How the Netroots Brought Down Obama’s Spymaster" -- and duly promoted by Glenn Reynolds.  After excoriating me for having the audacity to opine on CIA policies even though I never worked in the intelligence community and then proceeding to defend both Brennan and the CIA's policies, the author describes himself this way in his bio line:  "M. P. MacConnell is a novelist, historian and political analyst."