Can commercial jets fly upside down? Has terrorism forced a change in transoceanic flight paths? And other probing questions for our expert. 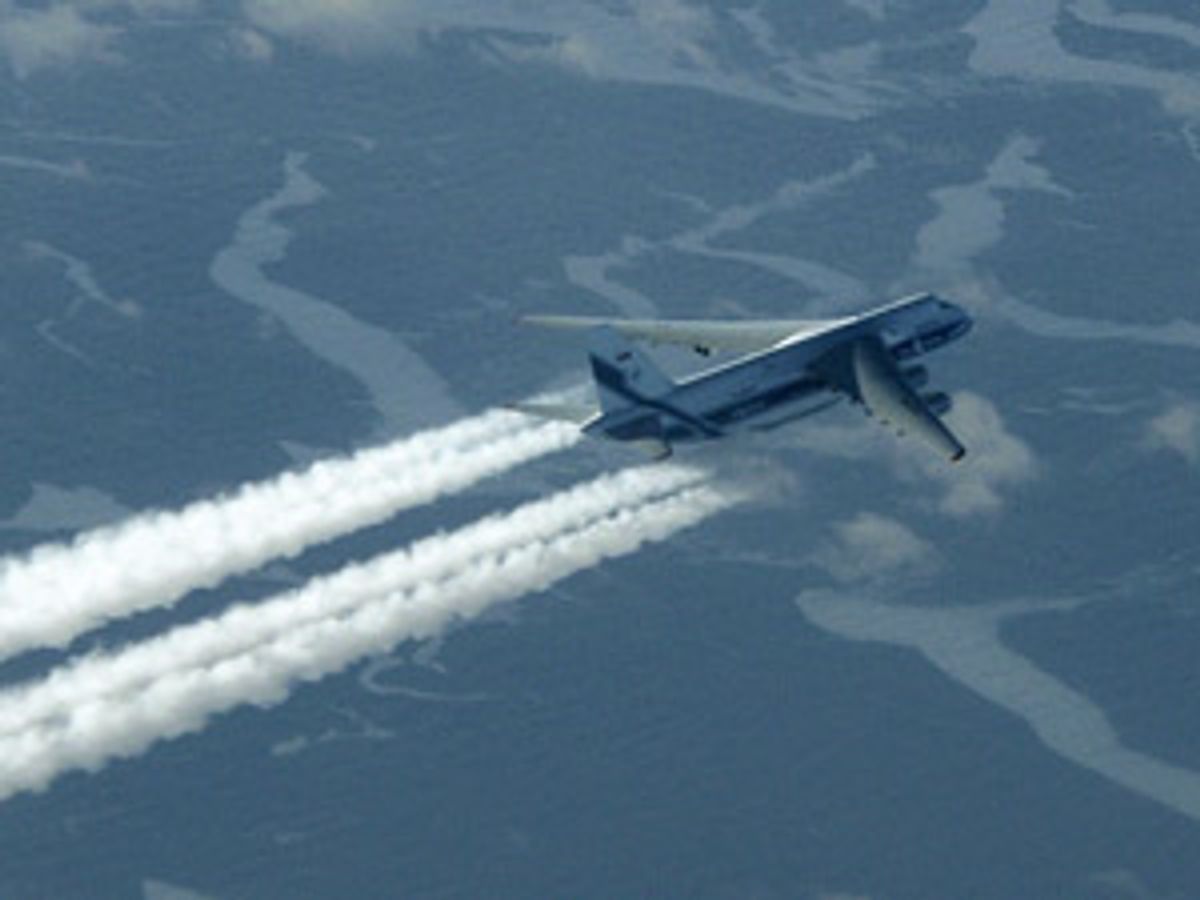 Nothing philosophical this week. We'll keep it real, so to speak, with some red-meat questions and answers from reader-submitted e-mails. A few of these concerns have been dealt with in this column before, but judging from how often I'm asked about them, it's probably time to review.

In your description a week ago of a Colombian jetliner that ran out of fuel over Long Island, N.Y., you write that the plane, all four of its engines having failed, "glided to a crash landing into a wooded hillside." I understand your desire to avoid alarmist language, but was that not a little soft? "Glided"? I suspect that "plunged" or "fell" might have been more accurate.

"Glided" was a perfectly apt term. Many passengers presume that only a glider can glide, and that a large plane, sans power, will exit from the sky like a stone. But this is not at all true. Granted, the complete ceasing of all engines brings on a host of ancillary problems (electrical, pneumatic, hydraulic), to put it mildly, but a jet will not -- repeat, not -- "fall," "drop," "plummet," "spin," "plunge," "nose-dive" or otherwise come flailing out of the sky like a pheasant full of buckshot.

Though some can do so more efficiently than others, any airplane, no matter how large or heavy, is able to glide. By "efficiency" we mean the number of feet that a plane moves forward in relation to the number of feet that it drops vertically -- the "glide ratio." The glide ratio of a large passenger jet often exceeds that of, say, a small Cessna. A jet needs to perform this glide at a higher speed, but the result is the same: a surprisingly long distance traveled. Consider the strange fuel-depletion incident involving Air Canada Flight 143 in 1983. During its glide to a perilous but fatality-free landing, the Boeing 767 was moving at a speed of around 240 miles per hour, losing approximately 1,000 vertical feet for every 10,000 feet it covered horizontally. In another bizarre incident, an even larger plane, an Air Transat (also Canadian) Airbus A330, glided for more than 80 miles after the loss of both engines over the Atlantic in 2001.

As for what such a glide feels like, most of you already know. Even in normal operations, it is common for passenger jets to descend at what a pilot would call "idle thrust." That is, the engines are run back to a zero-power condition. They are still operating, but in a way that produces little or no thrust. The descent rate and the accompanying sensations on those Colombian or Canadian jets would have been no different from what you've felt many times.

Midway across the ocean between England and New York, I watched as another 747 approached us and flew surprisingly close alongside for several minutes. It was just to the left and slightly beneath us, so close that you could see people in the other plane. Then we separated. Any ideas?

Planes on the transoceanic "track" systems commonly encounter one another more or less as you describe. However, any two planes along the same track (that is, a string of latitude and longitude points forming a sort of high-altitude highway) must be separated by at least 1,000 feet vertically, or several miles horizontally. I suspect the plane that approached you was flying the same track, slightly offset (as is often the case), 1,000 feet beneath you.

This photograph shows an Antonov AN-124 cargo jet as seen from a 767 over the North Atlantic, approaching the coast of Labrador. It was taken by me out the cockpit window. Believe it or not, the Antonov is 1,000 feet below us.

Not to belittle your powers of observation, but distances aloft can be very hard to judge, and passengers have an extremely common habit of underestimating the separation from other aircraft. Even during the most harrowing near miss it would be all but impossible to see the occupants of another jetliner. Even if an airplane is parked at the gate, a few feet away and stationary, it can be very difficult.

The distance from New York to Copenhagen, Denmark, is about 3,400 nautical miles. Continental Airlines uses a Boeing 757-200 on this route, and according to online sources this plane has a maximum mileage of just over 3,900. That seems to be pushing the limit. What about delays, storms, etc.?

First off, range is more accurately a measure of time, not distance, and the mileage values you see in books or on Web sites are a rough gauge only, predicated on specific conditions. In real life, duration is never a hard and fast value. It differs from flight to flight depending mainly on weight and winds. Even so, the values you cite leave 500 miles of slack, which is quite a bit.

As I've explained before, every flight, by legal stipulation, must have adequate fuel to account for delays. The regulations differ, depending on whether they're for domestic or international flights, but basically they work like this: A plane needs enough fuel to reach its destination, plus enough to reach any designated alternate airport (a minimum of one, with acceptable forecast weather, is required on any international route), plus an added buffer of at least 45 minutes. While en route, when crossing a fix or waypoint, the crew will match existing fuel levels with those calculated on the flight plan to see if they are running ahead or behind. Occasionally, such as when headwinds are higher than forecast, the burn will run higher than expected, but only in rare cases does this entail a diversion.

The Boeing 757 was not designed with ocean crossings in mind, necessarily. But that doesn't mean it is risky to fly them. In recent years, with hub-and-spoke networks increasingly bypassed by point-to-point nonstops, more and more planes that were conceived for short to medium haul are being put into service on longer pairings. We've seen 737s flying to Hawaii from California, and even between the U.S. and Britain. Domestically, JetBlue has been using the little A320 on coast-to-coast nonstops for several years now -- though once in a while, particularly in the winter when westerly winds are stronger, those aforementioned rules require that a nonstop become a one-stop.

Has anyone considered the possibility of aerial refueling for commercial aircraft to extend range? Aerial refueling has been used by the military for decades and would seem by now to be a simple application.

This is an idea that would have made better sense in decades past. The point has become moot, as long-haul commercial airliners like the 777LR and A340 are able to connect almost every possible city pair with no need for a refueling stop. The true refueling stop, in the traditional sense, is almost nonexistent nowadays in all but one or two markets (Australia to Europe; South America to Asia). But even years ago, when refueling stops were common, the cost of setting up such an operation -- the on-board equipment, safety features, etc. -- would have been extremely high, and a fleet of airborne tankers would have been required, operating around the clock. All in all, a simple pit stop was probably far cheaper, didn't add more than a couple of hours to the flying time, and allowed airlines to take on additional people and freight.

On a recent flight from New York to Frankfurt, Germany, a traveling companion mentioned that these days, because of terrorism fears, transatlantic (and other cross-ocean) flights have to stay close to shoreline as long as possible instead of heading directly out over the water. Following our route on the moving map display seemed to confirm this.

Untrue. There have been no changes to transoceanic flight paths. (Even over Iraq it is perfectly routine for commercial airliners to transit overhead.) Flights between the United States and Europe do tend to follow the contours of northeastern Canada, sometimes arcing as far north as Greenland, but this has nothing to do with terrorism -- it's simply the shortest distance.

On most flat maps (or the display on your seat-back video screen), with their awkward projections, such routings seem circuitous, but remember that the world is spherical. The shortest distance between New York and India, for example, is not west to east, but north to south -- up one side and down the other. Find yourself a globe and trace out a path between New York and Frankfurt, and you'll see that it takes you up over Newfoundland and Nova Scotia.

For more details, you can revisit this column's earlier discussion of "great circle" routes, here and here.

Is it possible to fly a large commercial jet (say, a 747) upside down? Many smaller planes are built specifically for aerobatics, but what would happen to a passenger jet?

Ah, an oldie but goodie. I'm asked this all the time, and there's a (half-assed) segment in my book about it. A jetliner can, in theory, perform virtually any aerobatic maneuver; in a strict aerodynamic sense, there is nothing to prevent one from flying upside down. In practice this would depend on the plane's power, weight, etc. Aerobatics are mostly a function of available power, so if the ship is very light, its capabilities would surprise you. I've seen some pretty radical maneuvering in simulators -- loops, aileron rolls, you name it. However, jetliners are not built for such flying, obviously, and G-loads can cause dangerous complications, from engine failure to catastrophic structural damage -- not to mention passengers vomiting all over the place. A Boeing 707 was intentionally flown upside down during a pre-delivery demonstration flight several decades ago.

Pilot skill and experience would also be a factor. A graceful aerobatic pilot (like Bob Hoover) could fly a loop with a glass of water set on the instrument panel and never spill a drop, while others would risk overloading the airframe.

Re: Slums, airports and hedgehogs

I am a scholar of public health, and I spent several years in Thailand. Not a day goes by that I don't reflect on the immensity of the misery that exists in this world and the irony or absurdity of contemplating it from such a comfortable and safe perspective. The way that the Western paradigm of development is foisted on places that really need compassion and humanitarianism before they need dams, highways and airports pains me deeply.