"The Day the Earth Stood Still"

This supremely lame update of the sci-fi classic, starring Keanu Reeves, is assembled out of bits of every movie where an unknown whatzit threatens our way of life. 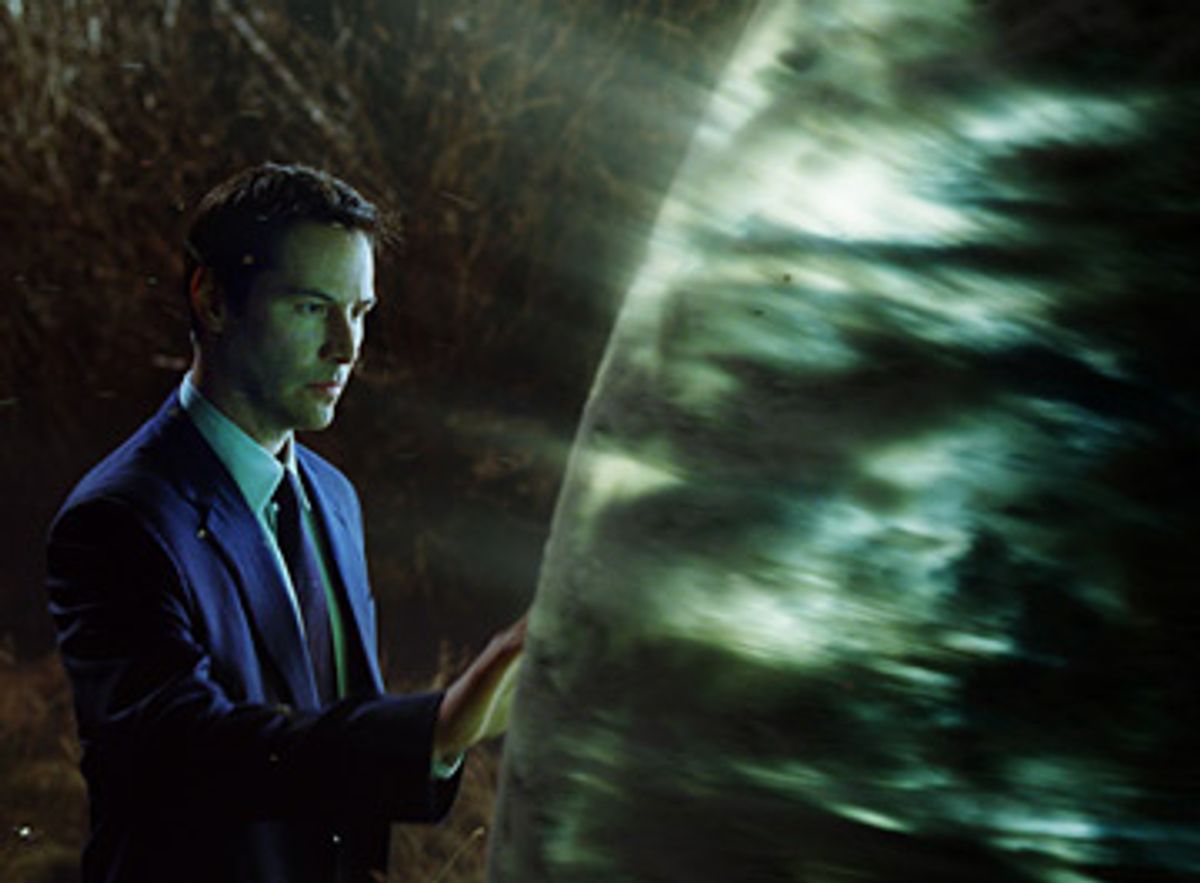 Maybe I'm supposed to begin by droning on about how timely it is for a big Hollywood spectacle that imagines the end of civilization -- and let's put an asterisk on the word "imagines," as it pertains to this dismal and second-rate film -- to appear in this season of global economic implosion. Well, sorry. The fact is that apocalyptic yarns are always in fashion. Since World War II, sure, but also since the Industrial Revolution, since the first millennium, since Noah and Gilgamesh. If it isn't the A-bomb or the judgment of God, it's environmental devastation or an asteroid collision or the prospect that Al Gore may melt, flooding the coastal cities of the world. (Or did I misunderstand that documentary?)

Prominent among the many problems with director Scott Derrickson and screenwriter David Scarpa's effort to update the 1951 Cold War sci-fi classic "The Day the Earth Stood Still" is that its timeliness is entirely superficial. It's pseudo-timely. This can't just be an alien-invasion flick featuring a cute female scientist, her ringleted kid and a wise, cardigan-wearing professor. It has to be an alien-invasion flick with Keanu Reeves in a borrowed suit, coming off like the bastard spawn of Neo and Agent Smith from the "Matrix" movies and murmuring in puzzled tones, "The planet is dying." Add a couple of lame special-effects shots of squid and catfish swimming gratefully from our waters into spinning, glowing space globes -- the aliens have apparently come to Earth for a spell of bait-fishing -- and you've got the vestige of a message.

Honestly, though, I wouldn't care about the tacked-on ecology lesson if the movie were any damn good. (Contrary to widespread critical assumptions, the public tends to like didactic message movies, as long as they're halfway entertaining.) Unfortunately, "The Day the Earth Stood Still" is a jumble of spare parts and leftover dialogue, as if it had been assembled out of unused bits of every movie where an unknown whatzit threatens our way of life and the government goes into full institutional pants-crapping panic mode. I don't even mean "E.T." or "Close Encounters," although there are dim echoes of both to be found here. More like "Outbreak" or the TV version of "The Andromeda Strain" or that movie where Bruce Willis collides with the Earth.

I saw this movie yesterday (as I write this) and I can barely remember it. It definitely has Reeves in it, though, as the alien Klaatu, who arrives in Central Park encased in a mold of icky space-gelatin and faints into the arms of super-skinny biologist Helen Benson (Jennifer Connelly), who's got on sexy but sensible hip-hugger flares under her containment suit. If you think I'm making any of this up, just see the movie yourself. (Now is the time to remind you tots in the audience that there was once a Canadian prog-rock band called Klaatu, which for inexplicable reasons was widely rumored to be a sub-rosa version of the Beatles. It wasn't, although the Klaatu song "Calling Occupants of Interplanetary Craft" was a 1977 hit for the Carpenters.)

Derrickson's previous directing efforts have included "The Exorcism of Emily Rose" and "Hellraiser: Inferno," and there's nothing in those mid-level movies or this much larger one to indicate that he has any particular aptitude for the craft. (He's apparently now making a film based on "Paradise Lost" -- yes, the epic poem by Milton -- and, really, what can you say about that beyond expressing abject and total horror?) Still, it's hard to hold Derrickson fully responsible when the screenplay is so hackneyed and dunderheaded. I half suspect that Scarpa's script is hackneyed and dunderheaded on purpose, as if trying to re-create the stark and seemingly innocent Earth-vs.-Martians, good-vs.-evil dichotomy of 1950s science fiction. If so, it doesn't work.

Maybe the real secret agenda of "The Day the Earth Stood Still" is to make the Bush administration look like a pack of cool-headed, deep-thinking geniuses in comparison. The fictional president and vice president of this movie are never seen; they've been chained up and shipped away to separate faraway bunkers, leaving Defense Secretary Regina Jackson (Kathy Bates) behind the desk. Jackson dresses like Madeleine Albright but thinks like Don Rumsfeld, and the only reason she doesn't have Klaatu subcontracted out to Egyptian or Bulgarian torturers is because he's a superpowerful alien who can bring down helicopters with his hands, raise New Jersey state troopers from the dead and extract tuna-salad sandwiches from train-station vending machines without paying.

Like Helen and all the other scientific and military advisors surrounding her throne, Jackson suffers from a syndrome common in these kinds of epic disaster films but nearly absent from the general population: She's apparently never seen this kind of movie and doesn't know how the story goes. She's amazed to learn that shooting Sidewinder missiles at Klaatu or at his ginormous robot defender, who are manifestly the products of a superior civilization, does no good at all and even makes matters worse. Furthermore, as dumb as human beings may be, I don't even buy this: Maybe when aliens land on the Great Lawn we'll just start randomly heaving military hardware at them, but I'd like to believe that any plausible human leadership would adopt a more judicious approach.

Given Klaatu's powers, in fact, I have no idea why he needs Helen and her combative, cute-as-a-bug black stepson (Jaden Smith) to ferry him around the New York metro area in Helen's Honda hybrid while he's figuring out how and whether to eliminate the human species. (If you're keeping score, there's two pseudo-timely plot elements in one sentence.) Helen eventually figures out that when Klaatu says he's a "friend of the Earth" he means that in a Peter Singer, deep-ecology way. "We can change!" she assures him. "You have to give us another chance." Sadly, not the slightest effort is made to establish sexual chemistry (or any other kind) between Connelly and Reeves; they come off as a handsome, chilly pair discharging a mutual obligation

Correctly observing that the collection of clowns known as world leaders are out of their depth with this guy, Helen first takes Klaatu to a McDonald's on the Jersey Turnpike and then to meet professor Barnhardt (John Cleese), a fatuous, Bach-listening Nobel laureate in the aforementioned cardigan. Up to that point, the only fun to be had in "The Day the Earth Stood Still" comes from watching Klaatu single-handledly undermine, subvert and reverse every stupid human trick aimed at defeating him. Then, when Barnhardt and Klaatu stand before a blackboard equation they've been working out and the former says, in awe-struck tones, "I have so many questions for you!" it all becomes clear: If this is the best the human race can do, forget it. Exterminate all the brutes, Keanu.