Philip Seymour Hoffman plays a priest who may -- or may not! -- be a pedophile in this deliberately ambiguous drama. 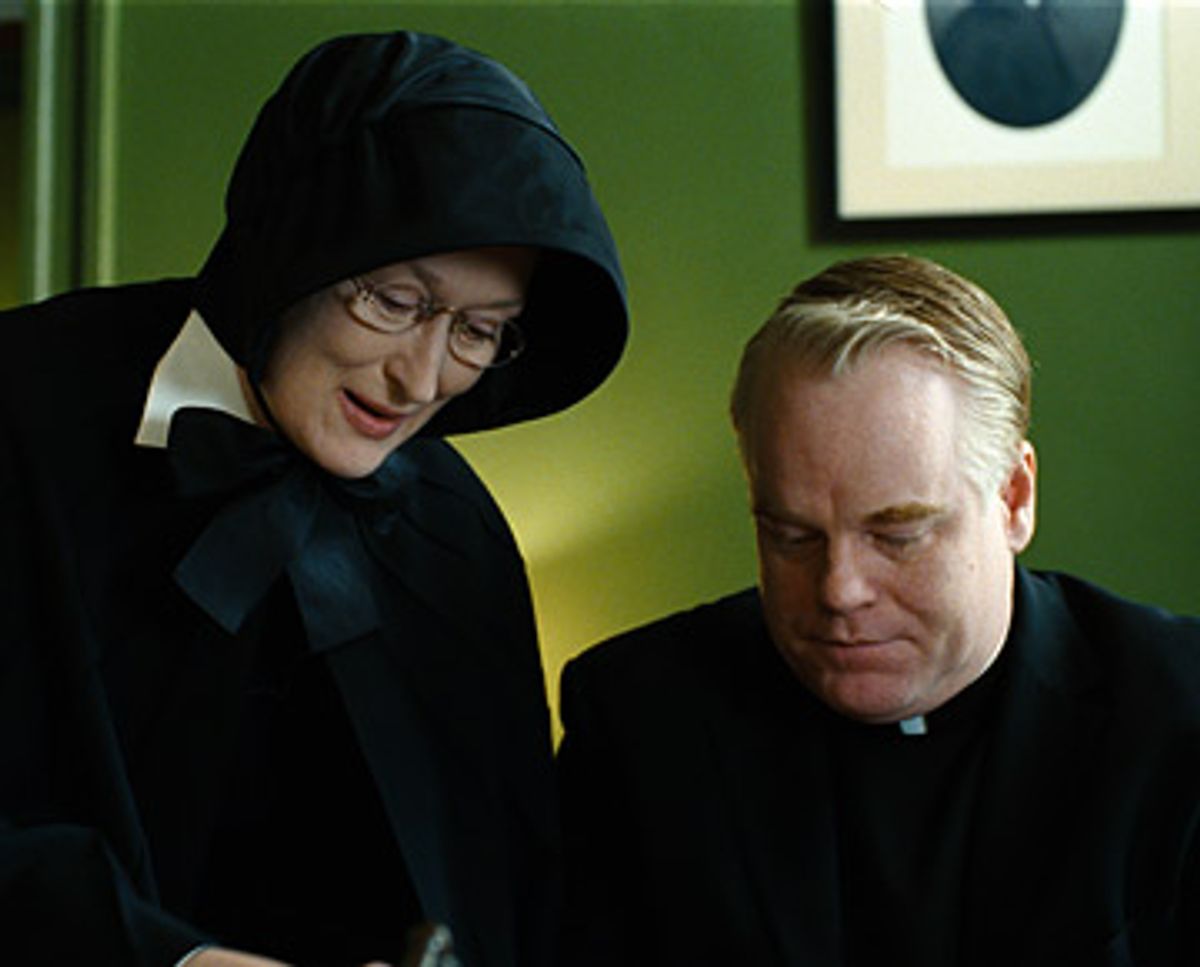 John Patrick Shanley's "Doubt" has an insurance policy built right into its title: Have no earthly idea what point Shanley is trying to make? It's all good -- you're just having Doubt! Clueless as to whether you're supposed to think one of the lead characters, Father Flynn (played by Philip Seymour Hoffman), is a pedophile, or just a harmless, compassionate, gay and/or gay-friendly priest? Step right up -- and let your Doubt flag fly! Wondering why the mother of a boy who has possibly been sexually abused (she's played, to a near-miraculous level of believability, by Viola Davis) would just kind of shrug her shoulders and say, "Whatever -- as long as he makes it to graduation"? Jump on the Doubt train, my friend! Nothing in "Doubt" -- which Shanley directed, adapting his own Pulitzer Prize-winning stage play -- is certain, definitive or clear. Least of all the filmmaking.

There are a few things in "Doubt" that are quite certain: It's a story rich in moral ambiguity (even if Shanley can't distinguish that from plain old garden-variety confusion); it's an excoriation of people who act with absolute certainty, convinced that God is on their side, without exercising any thought or compassion (and face it -- nobody likes them); and it raises questions about the real or perceived powerlessness of women in the Catholic Church. On that last one, Shanley doesn't seem to know which side he comes down on, but we'll give him the benefit of the -- oh, never mind.

"Doubt" contains ideas, all right: They swirl around indecisively, like flakes in a snow globe, landing in random patterns on the shoulders of the actors. The aforementioned Father Flynn is a thoughtful, likable man of the cloth who happens to wear his fingernails long and enjoys joshing around amiably with the kids -- particularly the boys -- who attend his parish's school. He has given some special attention to one child, Donald Miller (Joseph Foster), the only black kid in the school. (The story is set in 1964; Shanley drew from his own experiences, growing up in the Bronx at that time.) Donald is a shy loner. He's clearly a little lost, and he could use some extra attention from a kind adult, and Father Flynn provides it. But top-nun-in-charge Sister Aloysius (Meryl Streep, in the camp performance of the year), believes there's something a little odd about Father Flynn. She follows him the way a hawk scrutinizes her prey, and enlists the help of shy, sweet, sensible Sister James (Amy Adams) in keeping an eye on him. If Sister James witnesses anything suspicious -- Sister Aloysius is intentionally vague about what she's looking for -- she's to tug on the big cheese's sleeve, pronto.

Sister James does see something, although she also has -- wait for it -- doubts about her own perceptions. She's also a kind, compassionate human being who doesn't believe in making snap judgments about individuals. But her open-mindedness has no effect on Sister Aloysius, who, conflating overconfidence with doing God's will, and clearly motivated by her own ambitions, insecurities and small-mindedness, comes after Father Flynn with both nun-guns blazing.

Is there any grounding for Sister Aloysius' suspicions? You'll have to wait for the movie's last line -- a doozy of an equivocation if I've ever heard one -- to find out. Or at least, to sort of find out. "Doubt" is an intentionally fuzzy movie, and those who respond to it will inevitably use its intentional smudginess as a defense, claiming that we're not supposed to walk away from it with any reasonable certainty: We're not supposed to know who's gay and who's not, who may or may not be an abused kid. We're only supposed to know that Sister Aloysius is one superbitch from hell -- on that score, neither Shanley nor the outlandishly one-note Streep leave any doubt.

But all of that is just an excuse for the way "Doubt" cheats us. Shanley does a decent job of keeping up the illusion that he's leading us somewhere, to some big dramatic revelation or soul-shattering conclusion, instead of just in circles. By the time he gets to the end and drops his little bomb on us -- we know almost less than we did going in -- it's almost as if he's mocking us for expecting the usual dramatic resolution. Shanley makes no distinction between deliberate ambiguity and dramatic imprecision.

When Father Flynn is called into conference with Sister Aloysius and Sister James, he flops down in Sister Aloysius' comfy chair and allows the nuns to wait on him. The scene exists so we can see how the men of the church are entitled, protected creatures, while the women are cast as the dutiful Marthas, scurrying around to keep them comfortable.

That's a valid, and apt, observation. (Shanley hammers on it at another point in the film, making an obvious contrast between the way Flynn and his cronies devour steaks and tell crude jokes at dinner, while the sisters partake of their simple repast in silence.) But even though Shanley makes dozens of points, he develops none of them; he sets his half-formed ideas out on a silver tray and then snatches them away, to be replaced with others. I never saw the stage production of "Doubt," and I'm willing to believe that, pitched differently, the material could make for an engaging night of theater. But whatever ultimate effect Shanley's after, he has no idea how to make it work cinematically: He resorts to gimmicky tilted, low-angle shots, as if he felt these were necessary to jazz up the action. (The director of photography here is the near-godlike Roger Deakins, who should know better.)

Shanley's actors seem lost as well. I can't be sure what I'm supposed to take from Davis' big scene, in which her character, Mrs. Miller, makes an impassioned plea on behalf of her son Donald. Davis, in this small, one-scene role, is incredibly moving -- I can barely remember a Davis performance where I haven't been moved -- yet I have no idea where this character is coming from. The problem is that Shanley isn't sure either. Is he suggesting that, possibly, in certain cases, priests (or other trusted adults) who have sex with young boys aren't necessarily doing them harm? That maybe it's kind of OK, 16.2 percent of the time? That's an extremely controversial argument, but if you're going to make it, why not come right out with it, instead of dangling it in the air like a half-dead mouse you don't have the courage to touch?

Davis, like all the other actors here, is a sure-footed pro. But their performances don't come close to matching hers: Davis plays her character, an anxious, hardworking woman who's just trying to hold her life and family together, by holding everything close. She's not a fountain of emotion, dispensing broad expression or movement; instead, she keeps it all inside and lets us in.

Even Hoffman, one of the finest actors we've got, is dwarfed by Davis, although it's refreshing to see him carrying himself with the confidence of a dancer, instead of playing yet another schleppy loser (the kind of character he's too often been saddled with of late). Adams' Sister James is appealing enough, even if she does spend most of the movie wearing the look of a nervous chipmunk nibbling on a nut.

But Streep's performance scales new heights of absurdity. Like you, I've heard all the critical (or, more accurately, not-so-critical) rumbling: "Streep's performance will surely win an Oscar!" That's observant: It's so lousy that it probably will. The nuns in "Doubt" are members of the Sisters of Charity, which means they wear puffy hoods that tie under the chin, instead of the more familiar veil-and-wimple penguin getup. It's a costumey look that does no actor any favors, but it seems to have had a particularly deleterious effect on Streep, turning her into an overplaying maniac. She glowers from behind her austere little spectacles like Sunbonnet Sue on a PMS tirade. Streep's character is designed to convey the idea that women in the church, circa the 1960s, were powerless yet possibly dangerous, while the men were entitled but confused, and probably mostly harmless. Shanley offers no resolution to this Sharks vs. Jets conflict. For that, we have to wait for "Doubt! The Musical."