A lumber baron, a ruthless sexpot and a one-handed henchman star in this wildly entertaining tale of passion, murder and deforestation set in Depression-era North Carolina. 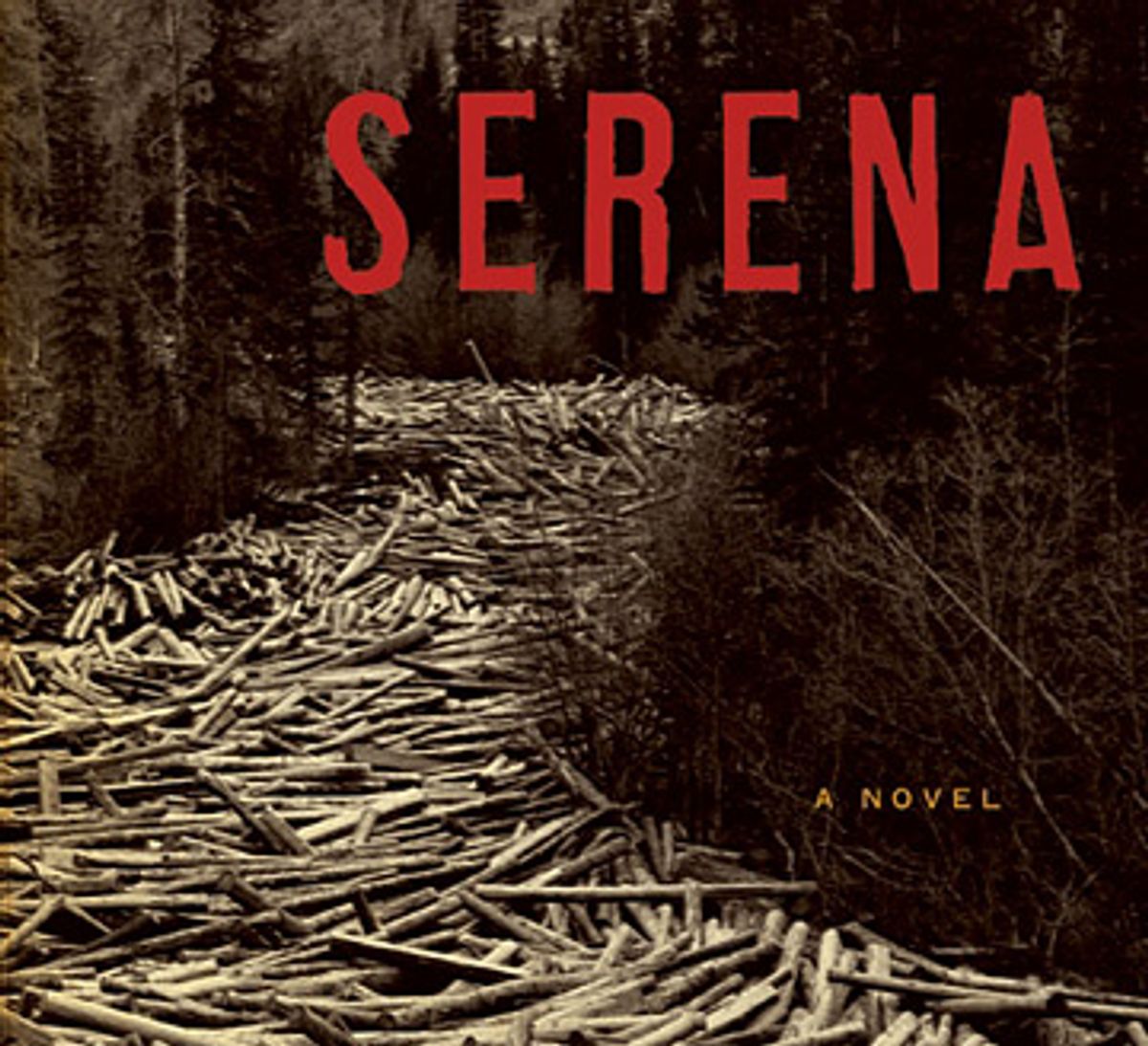 a novel of love, hate and clear-cutting set in Depression-era North Carolina -- and I mean that in the best possible way. It resembles one of those high-end mid-20th-century bestsellers with a title lifted from Ecclesiastes and a movie version in Technicolor, directed by Douglas Sirk, with a tag line like, "They were as bold as the country that made them!" The good guys in this melodrama are good, the bad guys are really bad and the meaning of it all is crystal clear. There’s even a chorus of crusty old lumberjacks hanging around to comment on the action in case any readers fail to get the point. In an age when literary fiction is so intent on subtlety that it often winds up virtually inert, a novel with this much uncomplicated gusto and narrative drive is a rare thing; in the case of  "Serena," it's also a welcome one.

The story begins with George Pemberton, a strapping young timber baron, stepping off the train from Boston with his new bride. This bride, the eponymous Serena, is the dynamo of the novel, an Amazonian sexpot with the philosophy of an Ayn Rand heroine and the morals of a Borgia princess. In Pemberton (whom she invariably addresses by his last name), she believes she has found her übermensch, the only man equal to the scope of her own ambitions. Small problem, though: They’re met at the Waynesville station by a farmer and his teenage daughter, who is carrying Pemberton's child. The two men engage in a knife fight to the death, and after Pemberton wins, Serena stops just short of licking the blade clean before handing it back to the pregnant girl and announcing, "It's all you’ll ever get from my husband and me."

After that, the novel alternates between accounts of the Pembertons' rise in wealth and power and the fate of Rachel, the farm girl who bears George Pemberton's illegitimate son. Once again, Rachel draws the short straw; Rash's quiet descriptions of her foraging for wild ginseng and chasing raccoons out of her henhouse with a baby tied to her back can't really compete with Serena’s Nietzschean doings. When not counseling her husband on the finer points of asserting his dominance over "the men," Mrs. Pemberton is shooting a mad bear at point-blank range, engineering the demise of inconvenient business partners and training her pet eagle (yes!) to kill timber rattlers. In her off hours, she sheds her clothes without an iota of coyness and offers up sex that her besotted spouse likens to "a kind of annihilation."

Eventually, Serena goes so far as to acquire a one-handed henchman with a clairvoyant mother, both of whom assist her in the less savory tasks required to rule the lumber company and greater Waynesville with a carbon-steel fist. The Pembertons' chief opponents are a group of do-gooders trying to set up a national park in the Smoky Mountains. This interferes with Serena's plans to deforest North Carolina and hand it over to strip miners before moving on to Brazil, where the real money and opportunities for depredation await. (One of the park's advocates, the historical figure Horace Kephart, is an ancestor of Salon contributor Beth Kephart, who writes about Rash's novel here.)

Some have compared Serena to Lady Macbeth, but the Thane of Cawdor's wife only put her husband up to one murder, and the epigram Rash supplies for "Serena," from Christopher Marlowe, suggests that his antiheroine has even more ruthless male precedents, such as the Mongol conqueror Tamburlaine. (At one point Serena also quotes Euripedes' child-killing Medea.) Like Iago or Milton's Satan, she's a magnetic figure, unfettered, undoubting and ultimately perverse in her exercise of pure will. What she wants to do matters considerably less than the utter ruthlessness with which she glories in doing it. The appeal of such characters lies not in their psychological realism but in the freedom with which they act out our own atavistic fantasies. Few writers can successfully pull off such a creation, but Rash does. This is the kind of book where, when a traveling circus troupe turns up with a caged Komodo Dragon, you say, "Really? Well, why the heck not, if I bought the eagle?"

It's only a matter of time until Serena's pitiless gaze turns to poor Rachel and the toddler who looks more and more like George Pemberton every day. The thematic import of all this is pretty obvious. Rachel has been exploited and abandoned by George just as he and his wife plan to rape and discard the land. Behind the creed of American individualism lie the empty eyes of a predator and its devastated wake. But just in case you're a bit slow, those lumberjacks pop up every now and then to remark that Serena is death incarnate and explain that after the timber is harvested, the once-crystalline streams of Waynesville flow muddy and sterile. "What happens when there ain't nothing left alive at all?" one of the men asks plaintively. (Serena's answer: You move to Brazil.)

Such a topical message feels a bit jarring for a tale as primal as this one, but environmentalism amounts to the piety of our age. Something has to substitute for the hodgepodge of now-outdated moral codes (of fealty, say, or chastity) that once presided over stories like this one. A plea for the earth (and for the welfare of unwed mothers) is made to act as the counterbalance to Serena and her terrible allure. If that gives us an excuse to read about her reveling in her wickedness, well, it's hard to complain.