As Dick Cheney heads off into a luxury-filled and respectable retirement, outrage continues to be directed at the petty transgressions of Eliot Spitzer 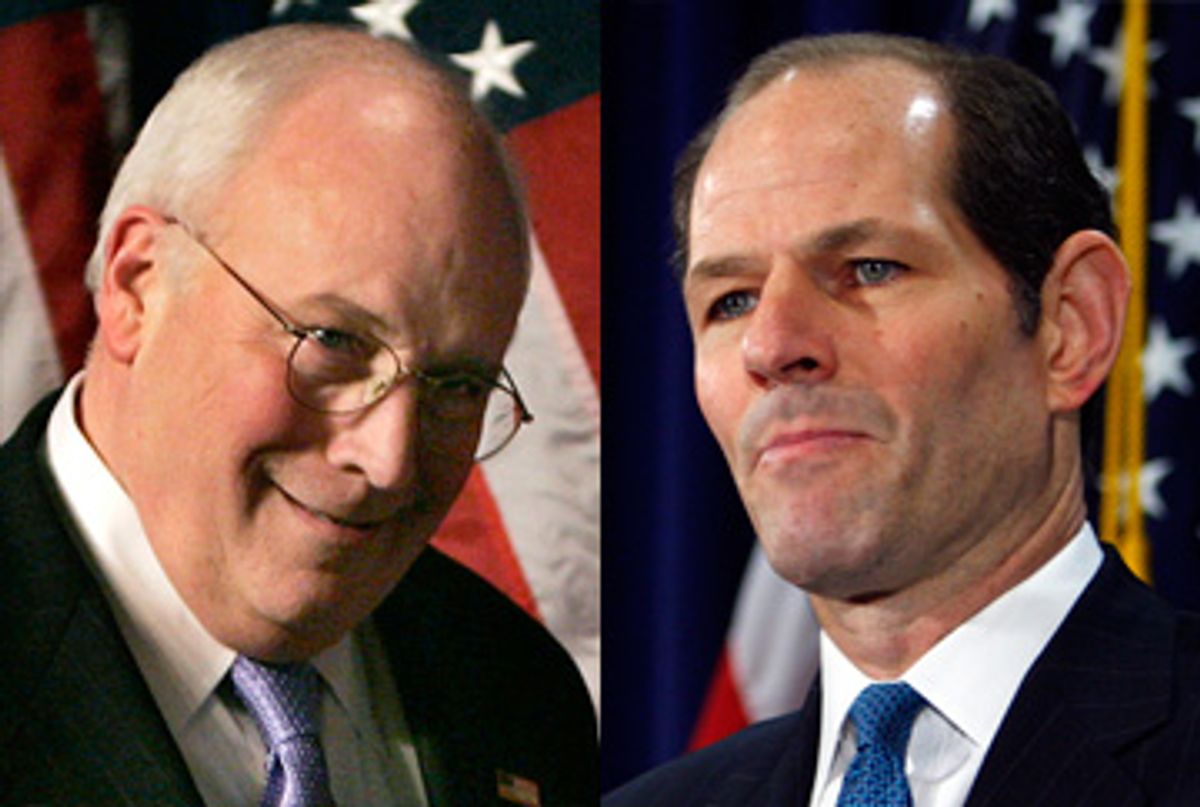 In October, the extremely pro-war, neoconservative New York Sun ceased operations, and its journalists are now finding a warm and welcoming home, appropriately and revealingly enough, at The New Republic.  Sun reporter Eli Lake was quickly hired as a TNR Contributing Editor (where he now "exposes" and excoriates "the Left" for its sinister "solidarity" with "Islamic supremacist insurgents" in Iraq, such as shoe-throwing reporter Muntazer al-Zaidi), and yesterday, TNR published a finger-wagging sermon by former Sun reporter Jacob Gershman, who vigorously objects that Eliot Spitzer is allowed to appear in public and even write a Slate column so soon after exposure of his grave and monumental sin of hiring adult prostitutes.

Gershman's column -- entitled:  "Why Eliot Spitzer's attempt to be taken seriously again won't work--and doesn't deserve to" -- illustrates how warped our public morality has become.  As a result of his minor, consensual, victimless, private crime (not because of his actual sin of hypocrisy as a former persecutor of prostitution rings), Spitzer was forced to resign as Governor, had intimate details of his sex life voyeuristically dissected by hordes of people driven by titillation masquerading as moral disgust, and was as humiliated and disgraced as a political figure can be.  But apparently, that's not even close to enough.  According to Gershman, Spitzer has many more steps to complete in his public humiliation ritual before he should be permitted to appear in decent, respectable company again:

But a comeback, especially for a scandal-tarred politician, must follow set guidelines and steps of progression. You can't skip ahead. Spitzer's problem is that he isn't playing by the rules. . . .

For one, Spitzer has yet to convince the public that he's actually sorry. When he resigned in March, he faced the cameras and said he had "begun to atone for my private failings." Since then, while privately apologizing to some friends and colleagues, Spitzer has made little effort to publicly show his remorse, and people have noticed. "He's missing the hurt he caused everybody, the hopes that were dashed, and the fact that the entire state government ground to a halt," one of his former senior aides told me. . . .

Even then, Spitzer wouldn't be off the hook, says [P.R. adviser Howard] Rubenstein, who recommends that Spitzer emulate John Profumo, the British war secretary, whose affair with a showgirl who was also seeing a Russian spy scandalized the U.K. in 1963. After he resigned, his decades of social work in London's East End became as well known as the events that ended his political career. Spitzer, says Rubenstein, should "pick a charity he likes and thinks he could work for. It can be a soup kitchen. He has to do something where he can use his talent or physical being" . . . .

All that -- he needs to self-flagellate and beg public forgiveness more humbly and even work for years or decades in a soup kitchen before he can even be heard from -- because, in private, Spitzer hired prostitutes.

Meanwhile, Dick Cheney went on ABC News on Monday night, where he was treated with oozing (i.e., typical) respect by correspondent Jonathan Karl, and literally admitted, brazenly and unapologetically, to committing war crimes; blithely justified the atrocities that were committed as part of our attack on Iraq; and glorified the whole slew of illegal surveillance programs he ordered.  And that's how most of the world outside of the U.S. (accurately) perceives Cheney's comments -- as a brazen admission of responsibility for many of the world's worst crimes of the last decade:

The outgoing US vice-president, Dick Cheney, last night gave an unapologetic assessment of his eight years in office, defending the invasion of Iraq, the US prison camp at Guantánamo Bay, secret wiretapping and the extreme interrogation method known as waterboarding. . . .

He told ABC News he stood by the most controversial policies of the Bush administration, and urged president-elect Barack Obama to think hard before undoing them. Asked about the use of torture on terror suspects, he replied: "We don't do torture. We never have. It's not something this administration subscribes to."

Later in the same interview, Cheney was asked whether the use of waterboarding in the interrogation of the alleged mastermind of the September 11 attacks, Khaled Sheikh Mohammed, had been appropriate. He replied: "I do."

Waterboarding is a technique that induces the sensation of drowning, and is widely regarded as a form of torture.

Yet unlike Eliot Spitzer, Dick Cheney -- just like Berkeley Law Professor John Yoo; think tank scholar, author and former Georgetown School of Foreign Service Professor Doug Feith; Georgetown's current Distinguished University Professor George Tenet, and so many others -- isn't going to be forced to endure any humiliation or remorse rituals whatsoever.  As Cheney is feted by network news anchors a year or two from now upon release of the book he plans to write, there will be no real objections that this monstrous war criminal and perverter of our constitutional framework is treated like some sort of retired royal dignitary.  Cheney is and will remain a symbol of profound seriousness, entitled to respect and endowed with permanent wisdom.

What's most striking is not that we have zero intention of prosecuting the serious crimes committed by our leading establishment figures.  It's that we don't even recognize them as crimes -- or even serious transgressions -- at all.  To the contrary, we still demand that those who are culpable be treated as dignified, respectable, serious and inherently good leaders.  Real outrage is never generated by the crimes and outrages they have undertaken, but only when they are not given their proper respectful due as leading American elites.  Hence:

An Iraqi citizen throws his shoes at an American President who -- all based on false pretenses -- invaded, occupied and obliterated his country; set up prisons where his fellow citizens were encaged without trials and subjected to brutal treatment; slaughtered hundreds of thousands of innocent civilians and displaced millions more.  And the outrage is predominantly directed at the disrespect, irreverence and the "ingratitude" displayed by the shoe-thrower, not the murderous and inhumane acts of the dignified American leader.

Tom Friedman goes on national television and sociopathically justifies the attack on another country by the need to make its citizens "Suck. On. This," and while Friedman is universally treated as one of America's most cherished and important public intellectuals, it's the college student who throws a harmless pie in Friedman's face to protest his deranged and highly damaging war-cheerleading that prompts angry condemnation ("absolutely horrifying," protested vocal Iraq war supporter Jonathan Chait).  Dick Cheney -- on his way to a lavishly rich and respectful retirement full of five-and-six-figure-speech-fees -- giddily admits to war crimes and other brutal and illegal acts, and TNR is angry that Eliot Spitzer is allowed to opine in public before being humiliated and humbled some more.

The reason the American political establishment tenaciously refuses to acknowledge the devastation and crimes that have been unleashed during the Bush era is obvious:  aside from the generalized belief that Americans are inherently good and thus incapable of meriting terms such as "aggressive wars" and "war criminals" no matter what they actually do (those phrases are applicable only to lesser foreigners), most of the establishment supported these crimes and the criminals who unleashed them.  We can therefore tolerate thinking about Bush officials and their bipartisan enablers as political and opinion leaders who (with the best of intentions) embraced what turned out to be some misguided policies, but not as people whose criminal acts led to death and suffering on an enormous scale and an almost complete degradation of whatever was still commendable about American political values.

That's the real benefit, the real cause, of these flamboyant and obsessive collective outrage sessions directed at petty offenders who do things like hire prostitutes, commit adultery, or engage in some sleazy though quite commonplace political corruption.  Those rituals enable those who participated in and cheered on real crimes to parade around as righteous defenders of the moral good without having to acknowledge the extremism, brutality and destruction they've supported.  The spectacle of the pro-war New York Sun and the Lieberman-endorsing TNR -- of all people -- joining together to complain that Eliot Spitzer (of all people) hasn't yet been humiliated or scorned enough is just one particularly vivid illustration of this warped public morality.