How the hell did Rick Warren get inauguration tickets?

Barack Obama knows liberals are upset he picked the conservative evangelical preacher to pray at the inauguration. And he doesn't care. 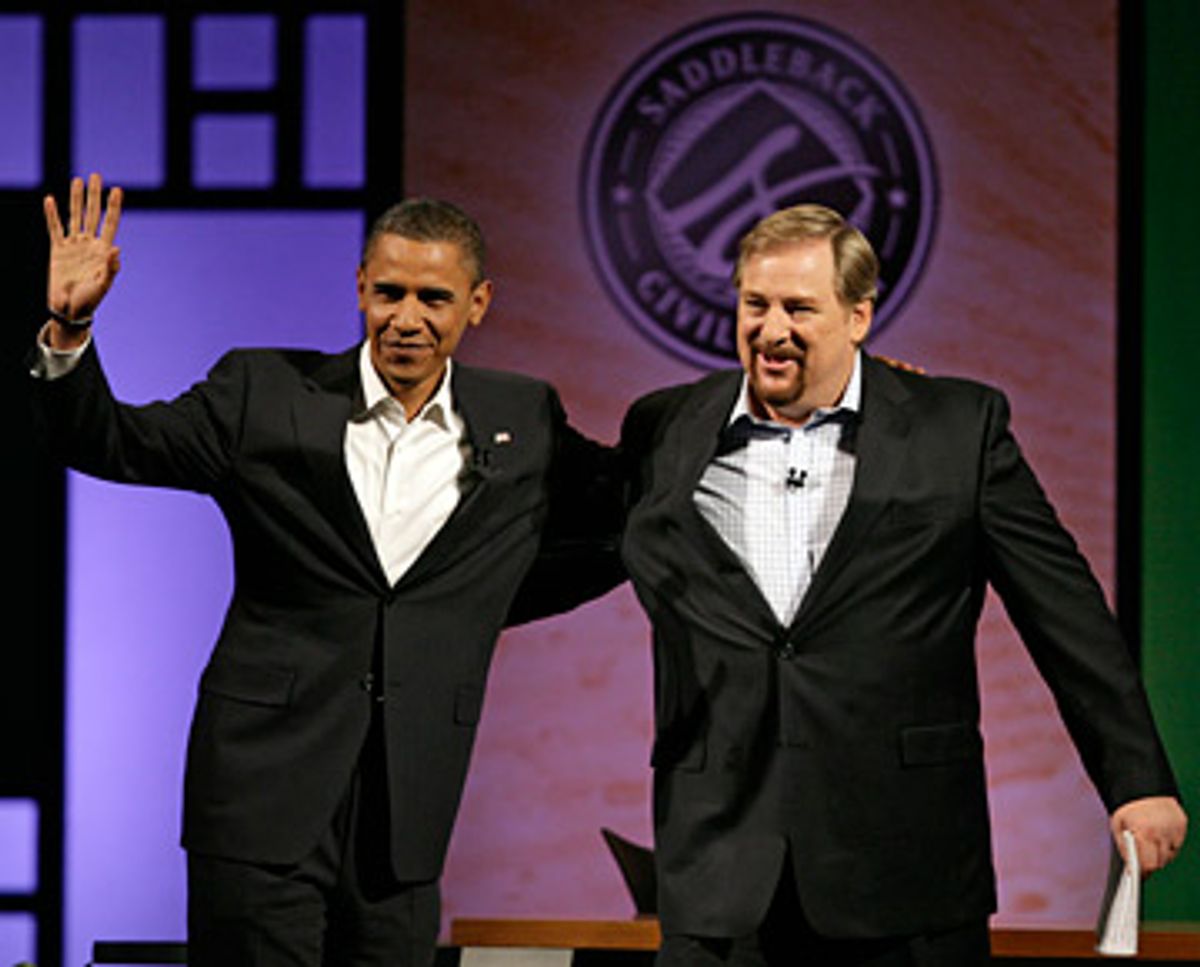 For more than two years, cozying up to Rick Warren has been one of Barack Obama's favorite ways of showing evangelical Christians that he might not be so scary, after all -- and for just as long, palling around with Obama every once in a while has been Warren's way of trying to show more secular-minded people that he's not so bad, either.

So about the only thing less surprising than the outrage that news of Warren's selection to give the invocation at Obama's inauguration is prompting among gay activists, liberals and Obama supporters generally is probably Warren's appearance on the program in the first place. Obama and Warren have often used each other to demonstrate that they'll be willing to listen to people they disagree with -- and yes, also to let everyone know that they'll be willing to anger their friends. This isn't one of those political controversies that pop up out of nowhere without warning; whether they want to admit it or not, it seems Obama's advisors brought on this fight with his own supporters knowing full well what was coming.

Having Warren speak at the inauguration might make more sense for Obama, now that he's been elected, than going to Warren's Saddleback Civil Forum in August in search of evangelical votes did from a campaigning standpoint. When the ballots were counted he only did marginally better among white evangelicals than Gore and Kerry; the idea now, apparently, is to signal that Obama will be a president for all Americans, whether they voted for him on Nov. 4 or not.

Except that Warren, by this point, isn't just the purpose-driven friendly face of evangelical Christianity anymore. He took sides, very publicly, in favor of California's Proposition 8, which overturned the state's gay marriage law. "About 2 percent of Americans are homosexual, or gay and lesbian, people," Warren said in a widely circulated video (and in a virtually identical e-mail to his congregation) before the election. "We should not let 2 percent of the population determine to change a definition of marriage that has been supported by every single culture and every single religion for 5,000 years. This is not just a Christian issue, this is a humanitarian issue." Prior to that, his late summer Civil Forum, at which he interviewed McCain and Obama, was seen by many liberals as an ambush. Instead of sticking to questions on areas where Warren truly has broken from some religious conservatives, like climate change, the importance of alleviating poverty and preventing HIV transmission, Warren drew Obama and John McCain into a discussion of old-school social conservative hot-button issues: the definition of marriage and whether life begins at conception. Days later, he turned around and blasted Obama's answers on abortion rights, comparing being pro-choice to denying the Holocaust.

But Obama was determined to defend his pick Thursday, and he set out the pro-Warren talking points himself, when a reporter brought it up at his now all-but-daily press conference in Chicago. "A couple of years ago, I was invited to Rick Warren's church to speak, despite his awareness that I held views that were entirely contrary to his when it came to gay and lesbian rights, when it came to issues like abortion," he said. "Nevertheless, I had an opportunity to speak. And that dialogue, I think, is part of what my campaign's been all about -- that we're not going to agree on every single issue, but what we have to do is to be able to create an atmosphere where we can disagree without being disagreeable and then focus on those things that we hold in common as Americans."

Translated out of press-conference-speak, though, that basically means: "I know you're upset. Too bad." Linda Douglass, a spokeswoman for Obama's inauguration committee and a senior advisor during the campaign, told Salon later that picking Warren "was not a political decision," which is usually the surest sign that something was exactly that. Obama aides wouldn't go into the decision-making process that led to Warren's selection, but Douglass admitted they predicted some of the fury it caused ahead of time. "People don't go into these kinds of decisions unaware that there might be some criticism, but on the other hand, the overriding goal, again, was this message of inclusivity," she said.

The problem is, many liberals, and gay activists, especially, are wondering exactly who was being included. "It's a symbolic role," said Brad Luna, a spokesman for the Human Rights Campaign. "[Warren's] job there is to kind of represent the spiritual totality of our nation. When that sort of person is put there, it definitely makes our community stop and think, 'Wow, are we part of the fabric of this inclusive new day, as we thought?'" The Human Rights Campaign issued an open letter criticizing Obama's choice on Wednesday. The fact that Obama, too, sees Warren's role as symbolic only made things worse. "We certainly know that Obama disagrees with Warren on gay rights issues, and we know that saying the prayer is not the same as setting policy," said Peter Montgomery, a spokesman for People for the American Way. "We certainly have great hopes for positive change in the Obama administration. The question is really elevating, to this place of singular honor, someone who has so recently trashed part of the community."

Making matters worse, the Obama team evidently decided not to alert anyone who was likely to be upset about the pick ahead of time. News of Warren's involvement in the inauguration came out of the congressional committee working on the inauguration instead of from Obama's own inaugural committee, a wholly separate entity. At least initially, aides for Obama's inaugural committee said the decision had come from Congress, not Obama. In fact, that wasn't the case at all. "That was solely the choice of the president-elect," said Gil Duran, a spokesman for Sen. Dianne Feinstein, the California Democrat who chairs the congressional committee. Obama's staff sent explicit orders for whom to include in the inaugural ceremony up to Capitol Hill, since Congress is, technically, in charge of that part of the day. "Sen. Feinstein obviously disagrees with the views of Rev. Warren on issues that affect the gay and lesbian community," Duran said. "However, Sen. Feinstein respects the president-elect's prerogative to select a cleric to deliver the invocation." (That one doesn't need any translation -- Feinstein's office was politely, respectfully, throwing Obama under the bus.)

Warren's spokesman, A. Larry Ross, told Salon Obama had contacted Warren to invite him, not the other way around. In a statement, Warren said, "I commend President-elect Obama for his courage to willingly take enormous heat from his base by inviting someone like me, with whom he doesn’t agree on every issue, to offer the invocation at his historic inaugural ceremony." But so far, say both Obama aides and his critics, there hasn't been much of a similar attempt to reach out to key allies who are upset about the pick and patch things up.

Obama hasn't even taken office yet, and it's already clear that he doesn't hold grudges (file Warren, Rick, somewhere behind Lieberman, Joe, on the list of people Obama has refused to seek revenge against for campaign-related slights). He's also determined to carry his post-partisan rhetoric from the trail all the way into the White House, and he seems to believe he can lead the country to a new united, consensus-driven politics. But first, he may need to find a way to convince everyone else on his side that that approach is the right one.