Pie (in the name of love) 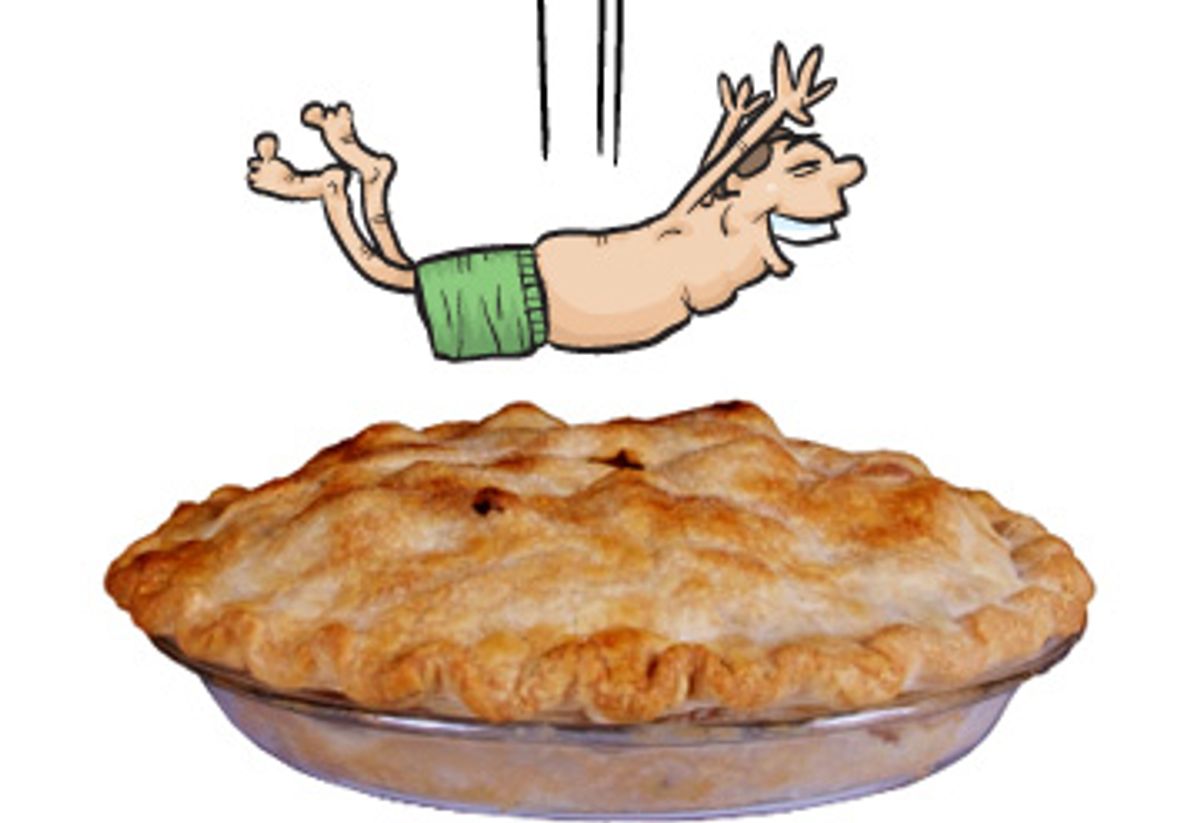 Five years ago, midway through a second date with a beautiful woman and emboldened by a little too much wine, I revealed my most fanatical belief. I set down the dessert menu, leaned back in my chair and set the crazy free.

"Before we go any further," I said, "there's something you should probably know."

She drew in her breath.

"For this relationship to work, you have to understand that at my wedding, there will be pie -- not cake -- for dessert." I stared into her eyes, searching for any hint of fear, ready for her to dart toward the door. "If you can't handle that, it's probably best if you just get out now."

Amazingly, she stayed in her seat. She nodded. Eventually, we resumed our meal.

I've been a pie extremist for as long as I can remember. Our family's photo albums are bursting with pictures of me at age 1, 5, 7, 23, lips coated in pie crumbs and blueberry filling, a look of Buddhist enlightenment on my face.

After a lifetime of pie-induced pleasure, I feel it's time somebody stood up for my perfect dessert. For too long, pie has played the ugly stepchild to that flamboyant diva of desserts, cake. Sure, plastered with enough frosting and chocolate-ganache implants, cake cuts a fine appearance at a party. But do you ever hear anyone talk about what's on cake’s inside? Cake’s dazzling superficiality and popularity has allowed us to ignore its tasteless core. All the while, pie has been standing in the corner waiting patiently for us to notice -- a little homey looking, sure, but with a personality like you wouldn’t believe. Pie is moist where cake is too often arid; it's complex where cake is too often banal. Pie offers me lasting contentment, whereas all cake can tender is a cloying sugar rush. In a subtle, supple flake of pie crust there is more of heaven than in all the world's slabs of cake combined.

I can't believe I'm alone in this. Despite cake's current sugary dominance, pie has historically been the democratic dessert of the common man in the United States. Pie is the dessert we’ve turned to for comfort in our actual homes. However, contrary to popular belief, pie is not an American creation. The first English settlers introduced the egalitarian edible to the continent, and that whole "American as apple pie" thing is actually a misnomer.

It took the influence of German and French settlers to transform pie from utilitarian to revelatory. "Pie evolved when we discovered that butter was delicious in the crust," Segan said. That occurred sometime around the mid 18th century, coinciding with a steep drop in the price of sugar cane that allowed us to make sugar a staple in our baking. During the 19th century, pie became such a popular dessert that homemakers would often make 20 a week; we literally ate pie at every meal.

The pie our forefathers enjoyed was slightly less sweet and smaller in size than the kind we eat today. According to Stephen Schmidt, a culinary historian and author of the forthcoming cookbook "Dessert in America," in the 18th century, there were four main American pie varieties: custard, mince, pumpkin or squash and fruit. "We ate many flavors that we have largely forgotten about now such as plum, pear, currant and gooseberry," Schmidt said. "And we did not thicken the pie filling with flour or cornstarch as is often done today. The filling was just fruit and sugar, but less sugar than we would use now." There were also some varieties that have thankfully fallen out of common favor in American cuisine, such as the English steak and kidney variety and sweet pea pie -- yes, pea pie was considered a dessert.

But pie’s practicality doesn't mean it can't also have a good time. Though the Oxford English Dictionary lists pie's linguistic origins as obscure, many linguists believe the word comes from an allusion to the aviary "magpie." This was due to the practice of medieval bakers concocting massive pies as the centerpieces of royal banquets. When these pies were cut open, live birds, such as the magpie, would be released to create a majestic spectacle for guests.

"I always kind of think of pie back then as a container -- the crust was the container for the yummy stuff inside," Segan said. "It was also a way to do really dazzling things on the table. In the Middle Ages, the pie was the surprise -- pie could be four feet high, the crust could even be gilded." In addition to birds, live garter snakes and frogs were also enclosed in pies. Diners seldom ate the crust -- without butter, crusts were often as hard as cement. "Pies were like making your own on-the-spot casserole," Schmidt added.

One popular pie in Shakespearean England was called "courage pie" because it contained all the ingredients commonly thought to have aphrodisiac properties at the time, including sweet potatoes, wine and, of course, sparrow brains (updated and original recipe on next page). Not to be outdone were the Egyptians. In Alan Davidson's "Oxford Companion to Food," the author recounts one of the world’s largest pies, a 12th-century formation of the Egyptians. The pie consisted of 30 pounds of flour, three lambs, 20 fowls, 20 chickens and 50 smaller birds. And consider: The only things that generally jump out of cakes are strippers.

Now, it is three months before my wedding. That beautiful woman to whom I confessed my pie infatuation has not only agreed to marry me, but she's also indulged my wedding pie demands. Surprisingly, she's just as ready to take a slice as I am.

In forgoing cake at our reception, we are actually snubbing history. According to Segan, cake has been the dominant wedding dessert in the West since at least the 1300s. "The tradition of putting the bride and the groom on the cake comes from putting the king and queen on the cake for celebrations during the 14th, 15th and 16th centuries," Segan said.

Seven centuries of tradition is a lot for any couple to overcome. Fortunately for me, in planning our menu, I enlisted the aid of Charlottesville, Va., chef Pierce McCleskey, who began 20 South catering in 2000.

"The chef in me always endorses foods that people love to eat, not foods that tradition tells us to eat," McCleskey told me via e-mail. "It's just more fun, and unique and tasty, to do pies."

Not to mention, pie is cheap. A truly pimped-out cake can easily run $15 per slice if not more. A luscious eight-piece pie, on the other hand, generally costs no more than $15 entirely -- or less than $2 a slice. In this dire economic era, pie is practical, cake a luxury. It's time for the pie-eaters of the world to unite!

McCleskey is a master of the savory pie, but I yearned for something sweet as well. So we added the confections of Jason Daniels of Tartan Catering. Daniels is the head chef at the Glenmore Country Club in Keswick, Va., but it was only this year that he opened Tartan with business partner Glenn Crossman. In my humble opinion, Daniels is to pie what George Washington is to America: a liberator, a visionary, a hero.

During a blistering September afternoon, Daniels created a sampling of seven varieties of individual, four-inch pies for us to taste. Sara Lee these were not. He infused his strawberry-rhubarb with basil, baked cheddar into his apple pie to make the filling more rich and satisfying than any I had ever experienced. He also plied us with a coconut crème that was more tart than saccharine.

"I try not to get them too sweet," said Daniels. "While it's warm, they might not be sweet enough, but when they get to room temperature, they're perfect."

Daniels' art reminded me of another reason I am going to be proud to tout pie's merits as a fitting end for my wedding: its seasonality. Pie is in tune with the seasons. This means apple pie in the fall, strawberry-rhubarb in late summer, peach in June. And in America, pie is as regionalized as dialects, serving as a landmark of place and history. The Pennsylvania-Dutch have the molasses-based shoofly pie, while Boston has its cream, and the South its chess, buttermilk, and sugar (essentially pecan pie without the nuts). Pie was locavore before locavore was cool.

So now that I have my pie, consider this my line in the sand -- or more accurately, my cut in the crust. It's not me who's insane for wanting pie at my wedding, but rather the world for ignoring pie as a harbinger of marital bliss. My impending nuptials thrill me, but I'm also enraptured about that dessert table, the apple-cheddar, blueberry, coconut crème and strawberry-rhubarb basil to come. I do, I certainly, certainly do.

I was intrigued by the recipe title "To make a Tarte that is courage to a man or woman" found in a 1587 cookbook. The "courage" they are referring to is sexual prowess. Several of the ingredients, including sweet potatoes and wine, were considered aphrodisiacs back then. But you will also notice another aphrodisiac ingredient, sparrow brains, was clearly omitted in this modern version!

Place the sweet potato and wine in a small saucepan over medium-low heat and simmer for 10 minutes. Add the quince and dates and simmer for 25 minutes, or until the quince is tender. (If the mixture becomes too dry add 1 or 2 tablespoons of wine.) Purée until smooth.

Preheat the oven to 350° F. Roll out the Renaissance Dough to 1/8 inch thick on a floured work surface. Press the dough into a pie pan and trim off any excess.

Place the sweet potato mixture in a large bowl. Add the brown sugar, cinnamon, ginger, clove, mace and butter and stir until well combined. Beat the egg yolk and rosewater in a small bowl, add to the filling, and mix well. Whisk the egg whites to stiff peaks and gently fold into the filling. Pour the filling into the pie crust and bake for 1 hour, or until the center springs back when lightly pressed.

**Renaissance Dough, ingredients: 2 cups sifted loosely packed pastry flour; 1/2 cup ice-cold water, 1/2 teaspoon salt, 1 large egg, beaten, cold; 1/2 cup unsalted butter, cut in small cubes, cold. Mix the flour, the ice-cold water, the salt, and the egg together on a cold surface until crumbly. Flatten the dough with a rolling pin and place one-quarter of the butter cubes on the dough. (Keep the remaining butter refrigerated until ready to use.) Roll the butter into the dough, fold the dough over and top with another quarter of the butter cubes, and roll it again. Repeat the process 2 more times until all the butter is incorporated. Cover the dough in plastic wrap and refrigerate for at least 1 hour.

Original recipe: To make a Tarte that is a courage to a man or woman.

"Take two Quinces and two or three Burre rootes, and a potaton, and pare your Potaton and scrape your rootes and put them into a quart of wine, and let them boyle till they be tender, and put in an ounce of Dates, and when they be boyled tender, draw them through a Strainer, Wine and all, and then putte in the yolkes of eight Egges, and the brains of three or foure cocke Sparrowes, and Straine them into the other and a little Rose water, and seeth them all with Sugar, Synamon and Ginger, and Cloves and Mace, and put in a little Sweete butter, and set it upon a chafingdishe of coles, betweene two platter, and so let it boyle till it be something bigge."
-- "The Good Huswifes Jewell," 1610 edition of 1587 book