Indies thrive in a dying economy

There were no "Juno"-scale hits, several distributors went under and the economy's in the crapper. But contrary to all reason, 2008 was a good year for independent film. 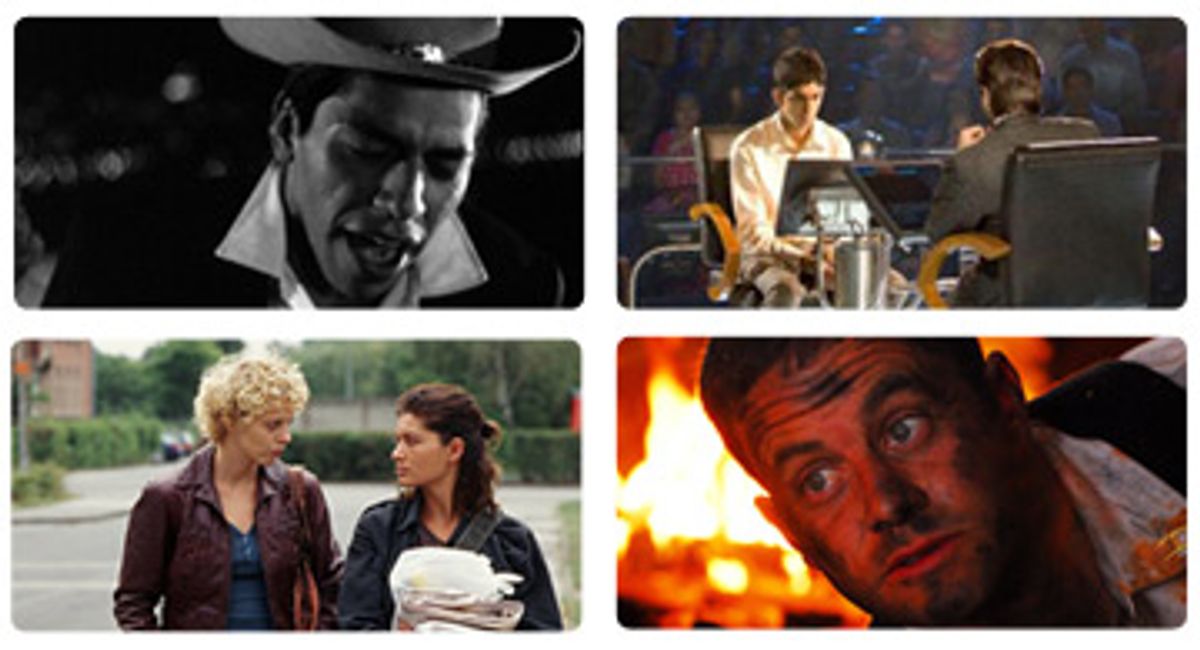 Clockwise from top left: images from "The Exiles," "Slumdog Millionaire," "Fireproof," and "The Edge of Heaven."

[This article has been updated since its initial publication. See below.]

You might reasonably assume from the outside, or even from the inside, that an article about the state of independent film in 2008 is going to be a tale of gloom and woe. The national economy is not just in the toilet but circling the drain. Overall, the movie business seems artistically and financially stagnant (if propped up this year by "The Dark Knight" and a couple of big animation hits). Several "Indiewood" distributors, meaning the quasi-independent divisions of major studios, were folded or swallowed by their parent companies this year, including Picturehouse, Warner Independent and Paramount Vantage. Several smaller distributors are in bankruptcy or close to it.

There was no "Juno" or "Little Miss Sunshine" this year, bursting out of the indie ghetto to win America's heart. It always depends on what production methods and distribution pathways you're willing to consider independent, but this year's top-grossing indie was, quite plausibly, the Christian-themed marriage drama "Fireproof," at $33 million and counting. I haven't seen the film and have no cause to disparage it, but I'll go ahead and guess it's not ending up on a whole lot of top-10 lists. There are some Indiewood pics in the Oscar mix, as usual -- "Milk" and "Slumdog Millionaire," for sure, but also maybe "Frozen River" and "Rachel Getting Married" -- but no whopper critical fave-raves on the order of "No Country for Old Men" or "There Will Be Blood." (Lance Hammer's lo-fi Mississippi drama "Ballast," one of the best-reviewed films of the year, has done virtually no business.)

So when I convened an impromptu panel of indie-film insiders and observers to discuss the year just past, as is my wont, what did they tell me? "I think we had a terrific year, an outstanding year," says Tom Bernard, co-president of Sony Pictures Classics, whose slate this year has featured "Rachel Getting Married," "Frozen River," "Waltz With Bashir" and "I've Loved You So Long," among others. "We released 18 films and counting, and we couldn't be happier with our slate and how it performed," says Bernard. "Furthermore, I think the business is healthy. It's in a good place creatively and the audience is strong."

OK, well, Bernard is one of the biggest fish in the indie pond, working for a huge company that can afford to gamble a little. Furthermore, he may claim to be thoroughly delighted with Jonathan Levine's '90s-nostalgia saga "The Wackness," whichso far has earned much less at the box office than it cost to produce, but he may be spinning us just a little. [UPDATE: I initially reported that "The Wackness" had cost $20 million to produce, as estimated on IMDb. Producer Keith Calder has since emailed to say that the film "wasn't made for anywhere near" that sum. Even if the original error wasn't mine, I shouldn't have passed it along.]

So what happens if we go to the other end of the indie ecosystem? We get the same answer, that's what. Dennis Doros is the co-founder of Milestone Films, a niche distributor in New Jersey that releases one or two films a year, generally rediscovered or unreleased classics. With Charles Burnett's neorealist masterwork "Killer of Sheep" last year and Kent Mackenzie's "The Exiles" (a mesmerizing docudrama about American Indian life in early '60s Los Angeles) this year, Milestone probably had its highest-profile releases ever.

"The business end of what we do has never been easy," Doros says, "but the critics have been remarkably supportive of our work and that's helped a lot. With two successes in a row, Milestone is actually in excellent shape -- perhaps the best ever." Although Milestone doesn't typically announce its grosses the way traditional distributors do, Doros says "The Exiles" and "Killer of Sheep" have brought in close to $1 million between them -- and while that'd be a pittance for Sony, it's a highly satisfactory result for a tiny company.

Moving a little up the ladder, Strand Releasing president Marcus Hu is every bit as bullish, saying, "Things have been really good for us. We've had an extraordinary year." A Los Angeles distributor specializing in challenging foreign films and gay/lesbian-themed material, Strand had modest hits this year with Turkish-German director Fatih Akin's "The Edge of Heaven" (earning about $750,000) and French director Claude Miller's Holocaust saga "A Secret" (still playing, at $550,000-plus). "There's just no way you can predict something like that," Hu continues. "If you'd asked me about those movies at the beginning of the year, I'd have said, 'Well, maybe they'll do OK.' It just proves that there's definitely an audience out there that's hungry for intelligent films."

If anything, the apparent collapse of the mid-level Indiewood sector has opened up the marketplace for smaller, leaner, cinephile-oriented distributors like Strand, which will celebrate its 20th anniversary in 2009. "It's all about surviving everything, like a cockroach," Hu laughs. "What's happened is that companies like Focus Features and Weinstein and Miramax are doing much bigger films now. It's left a good niche for us. We're out there, IFC is out there, Zeitgeist and New Yorker are out there. It's to the credit of those companies that they're doing so well in this market. And they've built up a library of really good films [on home video] -- that's what will serve you in bad times."

According to veteran distributor-turned-filmmaker Jeff Lipsky (who's in the final editing process on a film for Sundance), "From every point of view and at all levels of the business, this has not been that bad a year. If anything, there's been an uncanny uptick in the theatrical business that's totally unrelated to quality." A recent New York Times article argued that this year's improved box office reflects upbeat films calibrated for dark times, but Lipsky doesn't agree. "I do what I do because movies were an escape for me when I was a kid -- but emotionally challenging movies provide an escape too. Bergman movies were an escape for me. I can't imagine a more pessimistic film than 'The Dark Knight,' and you can't attribute a billion-dollar worldwide gross to fanboys and their ilk."

There continues to be debate about the "day-and-date" release platform extensively used by IFC and a few other distributors, whereby a film is made available on pay-per-view simultaneous with its big-city theatrical release. Sony Pictures Classics' Bernard remains committed to conventional theatrical release. He says day-and-date is a sham, essentially a loss leader for the cable TV business. (IFC is owned by Rainbow Media, owned in turn by Cablevision.) Referring to IFC president Jonathan Sehring's claim that day-and-date has yielded new revenues and developed new audiences for challenging films, Bernard says, "I think Jonathan could make the same money by having the movie go through conventional levels of release," that is, by starting in the big coastal cities and gradually working into the heartland.

Another IFC competitor, who asked not to be quoted by name, said, "IFC really bugs me. What you have there is a vertically integrated monopoly. They produce, exhibit, distribute and broadcast, and yet they have the utter gall to call themselves the Independent Film Channel. I can't believe how Orwellian it is. They're all about making money at the end of a long tail."

Those I interviewed were unanimous that Internet distribution of feature films, the focus of several different experimental ventures this year -- like the documentary streaming site SnagFilms or the YouTube release of Wayne Wang's "Princess of Nebraska" -- isn't ready for prime time. "Watching a movie on your computer is still not a great experience," says Hu. "At least, I wouldn't want to do it. We might almost be at the point where you order a movie on the Internet and have it delivered to your home theater system. That sounds a lot more viable."

Bernard is inclined to believe that digital distribution will never be more than one factor in the ancillary distribution equation, at least for many years to come. But Dennis Doros cautions that predicting the cultural and technological future is impossible. "I've read articles about the United Kingdom developing a new 50 MB Internet service that would make it possible to download a film in three or four minutes," he says. "They're also saying 200 MB is not far away. That could clearly change the dynamics of the theatrical world. If film distribution as we know it becomes the buggy-whip business of the 21st century, then Milestone will evolve into something else. Of course, I do hope the communal experience of cinema will last forever."

Since most of the distributors I talked to draw a crucial revenue stream from the home-video business, they were loath to discuss its failings. But one important subplot of the 2008 story is that studios and electronics manufacturers have spent countless millions trying to gain consumer acceptance of the new Blu-ray disc format, without the expected success. Jeff Lipsky observes that the constantly shifting technological landscape may actually benefit old-fashioned moviegoing. "You know, with the theatrical business experiencing this lengthy and unexpected period of immortality," he says, "I wonder whether the technological side of the industry isn't beginning to frustrate and confuse the public.

"It seems like every six months to a year, the public is being asked to invest in some new piece of hardware -- and then to replace all their irreplaceable software with new software," Lipsky goes on. "And we never know what's coming next. Maybe in a year, I can have the biggest art-house theater in the world in my living room, and I can order anything that's ever been produced and watch it instantly. It's clear to me that the eyeballs are still there for adventurous films, quality films. There's all this theatrical buoyancy, which suggests that people are saying, 'I'm just going to the movies and relaxing. I don't have to upgrade my entire system and invest thousands of dollars in something that'll be obsolete in 24 months.'"

Almost everyone I interviewed agrees that the full effects of the economic crisis have yet to be felt in the film world -- but they remain optimistic that moviegoing will remain a viable entertainment option even in a wretched economy. (Urban dwellers may have a tough time believing this, but the average adult ticket price nationwide is still around $8.) Doros expects to see a lot more companies laying people off or closing down, but sees a silver lining in the incoming Obama administration. "None of us knows where we stand in the next year," he says. "I do think we've been under a reign of cultural ignorance and xenophobia -- perhaps a celebration of it -- for quite a while now, and that's about to change. That can only help the arts."

Tom Bernard sees one immediate economic effect on his business, one he'll feel as soon as next month, when the legendary Indiewood bidding wars of Sundance are likely to be a whole lot quieter. "I'm not going to be sitting there at Sundance, in the back room of a restaurant at 4 o'clock in the morning with somebody I just met 20 minutes ago, while they're calling the dentist on the Eastern Shore who financed their film to talk about who they should sell it to. That just isn't happening."

In a couple of days, I'll unveil my own personal indie-flavored top-10 list of 2008. It's been the toughest year to puzzle out I can remember. If your own list is ready, please share.