Read it and weep

The economic news couldn't be worse for the book industry. Now insiders are asking how literature will survive. 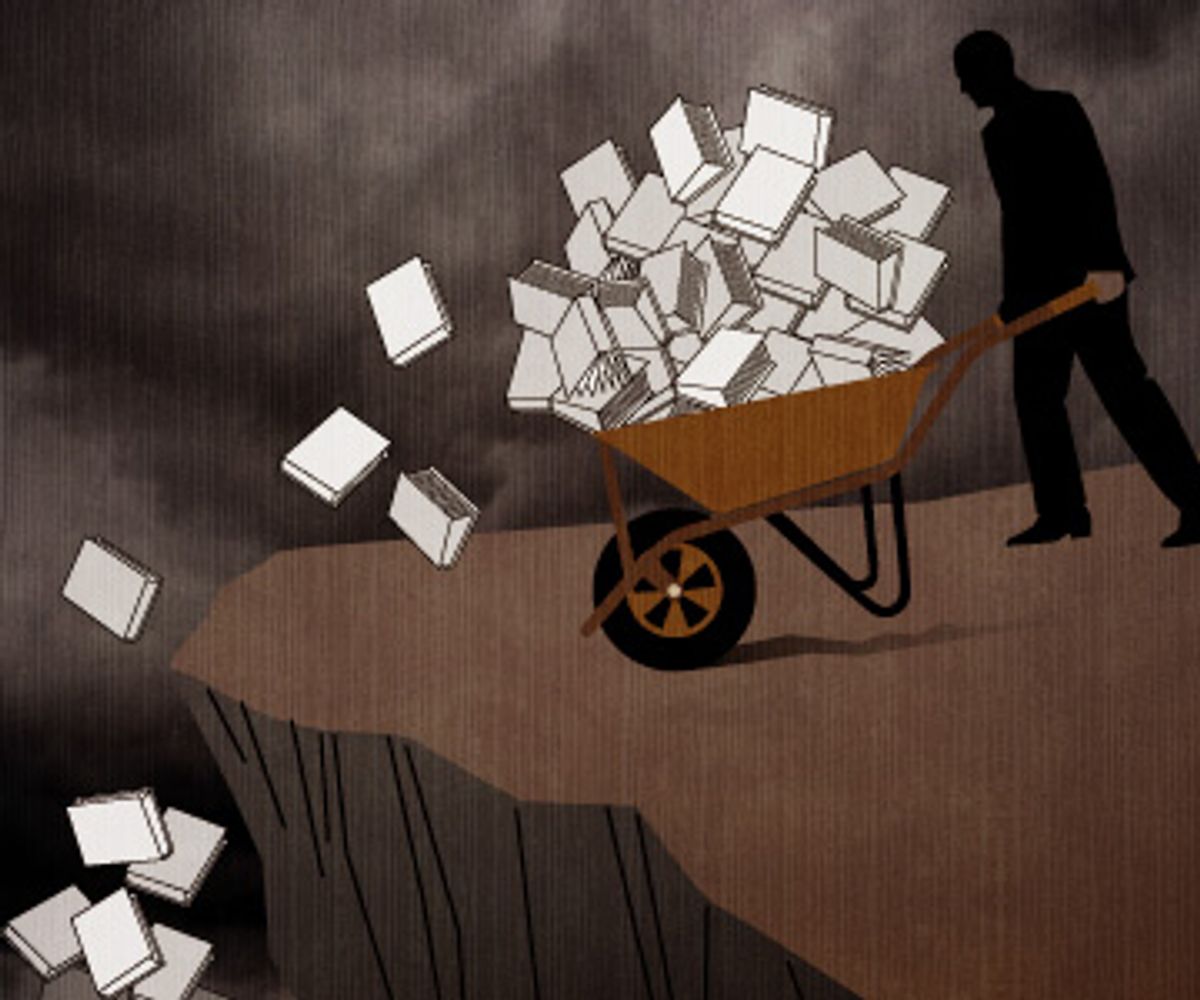 The end of days is here for the publishing industry -- or it sure seems like it. On Dec. 3, now known as "Black Wednesday," several major American publishers were dramatically downsized, leaving many celebrated editors and their colleagues jobless. The bad news stretches from the unemployment line to bookstores to literature itself.

"It's going to be very hard for the next few years across the board in literary fiction," says veteran agent Ira Silverberg. "A lot of good writers will be losing their editors, and loyalty is very important in this field."

One of the most visible victims was Houghton Mifflin Harcourt, the publisher of Philip Roth, Margaret Drabble, Richard Dawkins and J.R.R. Tolkien, among many others. Just before Thanksgiving, the publisher (actually two venerable houses, Houghton Mifflin and Harcourt, which were bought and merged by an Irish company over the past two years) had announced an unprecedented buying freeze on new manuscripts. On Dec. 3, they laid off what former executive editor Ann Patty described as "a lot" of employees (the industry trade publication Publishers Weekly confirmed at least eight), among them the distinguished editor Drenka Willen, whose list of authors included Günter Grass, Octavio Paz and José Saramago.

The bad news kept rolling in. Within weeks, Macmillan had laid off 64 employees, spreading the damage across the entire company, which includes such literary stalwarts as Farrar, Straus, and Giroux; Henry Holt; Picador and St. Martin's Press. Not only were some of the industry's most respected figures out of a job, but a tremendous number of writers had lost their editors and publicists.

Publishing has endured plenty of rough patches, but this time, matters seemed truly dire. "There is a tendency in the industry to think that it is always under siege. There's a certain amount of Sturm und Drang that is part of book publishing," says Sara Nelson, editor in chief of Publishers Weekly. "I think it feels worse because it's everywhere now. It feels like the world is coming to an end -- and book publishing is just one part of that."

Thanks to conglomeration and corporate distribution models, some of publishing's biggest houses were laid very low by the current stock market collapse. And scary holiday book sales figures compounded the industry's woes, with recent news of a 20 percent drop in sales in October from last year's book market. Even worse, Nielsen Book Scan reported a 6.6 percent drop in unit sales during early December. Not even the holiday season could bolster book sales.

Houghton Mifflin Harcourt was particularly vulnerable to the Wall Street crash. Since the turn of the 21st century, investors have struggled to spin gold out of the different companies that now make up the conglomerate. In 2001, Vivendi Universal bought Houghton Mifflin (which has been publishing literary and educational books since the late 1800s), but then sold it to private equity firms a year later. In 2006, an Irish firm bought Houghton Mifflin; within a year, they had merged with one of Houghton Mifflin's largest rivals, Harcourt. The publisher's parent company is now saddled with billions in debt.

"There were hedge fund guys with no background in publishing buying up publishing houses," says André Schiffrin, founder of the New Press and author of "The Business of Books: How the International Conglomerates Took Over Publishing and Changed the Way We Read." He explains that corporate owners of major publishing houses expected impossible 15 to 20 percent profit margins in an industry with traditional margins of 3 to 4 percent. "They were part of that whole feeling that you could make money by buying and selling companies, rather than by selling books. At some point it comes to a dead end."

At the same time, shifting distribution models created another sort of dilemma. One expert blamed new kinds of stores for disrupting the system. "I think bookselling is the big problem," says Nelson from Publishers Weekly. "With the rise of the Barnes & Noble superstore and the advent of Amazon, the little stores are going by the wayside. Distribution is national, rather than individual. On the wholesale level, decisions are made by two or three groups of people. Used to be you could make a book with a bunch of small buyers. There are fewer small buyers, and they have less leverage."

Finally, experts suggest that publishers missed crucial opportunities to cope with digital books, Internet innovations and economic pressures. "The big houses proved incapable of looking at the future. I've always been struck at how relatively un-nimble the big houses are," says Tom Engelhardt, a consulting editor at Metropolitan books and the author of the prophetic novel "The Last Days of Publishing." He recently wrote an essay about the crisis at his Web site, TomDispatch.com, and says he predicted the crash for years -- but no one would listen.

All these factors have produced an industry slowdown that will affect all writers for years to come.

As the corporate monoliths limp into 2009, a number of smaller, more independent houses could thrive during this recession. A few of those presses have structured themselves to avoid long-standing problems that got big publishing into this mess: high advances, long author lists and spiraling costs.

At the Frankfurt Book Fair this year, Open Letter Books, a small press based at the University of Rochester, illustrated how a more nimble firm can benefit from the freeze. The publisher bid on the English translation of Mathias Enard's novel, "Zone" -- a single sentence that stretches for 500 pages. An influential translator had called the work the "book of the decade," and Open Letter director Chad Post expected tight competition for the rights. But no one topped his offer, and he hopes to publish the translation in 2010.

"There's not much to cut at smaller presses, so they are going to stay the same -- they will have an identity coming into the recession, and they will be the same when they come out," Post says. "It will open up opportunities for the smaller, more stable presses. The bigger houses like Knopf and Houghton Mifflin Harcourt are going through an identity shift. It will become very murky what kinds of books they produce."

The independent press McSweeney's Books led the move away from the corporate publishing model of big advances and blockbuster books. Ever since Dave Eggers' company started publishing books in 2001, the publisher has split profits 50-50 with writers, giving a small advance at the outset. The house marshals its resources by putting out a fraction of the titles produced by a major publisher, with a backlist of more than 35 titles.

"What a lot of the small publishers cling to is not huge, particular business insight, but rather a thing beyond business. We pick midlist books" -- meaning that class of serious literary books that don't rake in big sales -- "because we are excited about those books, not just because of the kind of money they will bring in," says Eli Horowitz, McSweeney's managing editor and publisher.

One of the big houses is now experimenting with such small-press techniques. Earlier this year, HarperCollins opened HarperStudio, an imprint that follows McSweeney's lead. The brand-new imprint also pays relatively small advances, splitting 50 percent of the profits with its authors. Earlier this year, Bob Miller left a 17-year-long stint at Disney's adult publishing imprint, Hyperion, to helm this new house.

"The book industry had a steady increase of costs without an increase in sales," says Miller, analyzing how conglomeration caused publishing giants to scrabble for the same blockbusters, driving advances higher. "We had passionate competition for what was perceived to be the next big thing."

HarperStudio has another strategy: "Our hope is to publish midlist books without betting our company on it. The midlist, in most companies, are the books that have the fewest resources. We're trying to grapple with that, spending $100,000 or less on a book," Miller says. Nevertheless, many of the imprint's first signings aren't exactly big risks, hitched as they are to celebrity names: a book by hip-hop artist 50 Cent, a Toni Morrison-edited anthology, and a 10-book contract for TV personality and chef Emeril Lagasse.

Who will survive publishing's Ice Age? Undoubtedly, the companies that can command developments in the impending digital book revolution. Early next year, Amazon will release the second generation of the popular Kindle, and the Sony e-Reader currently has more than 300,000 users. But the biggest shift might happen on cellphones. Lexcycle has created an e-reader platform for the iPhone and iPod Touch called Stanza. Since the application debuted in July, it has built up 600,000 users. So far, Lexcycle has partnered with big publishers like Random House, Pan Macmillan and Harlequin, as well as self-publishing companies like Smashwords.

Neelan Choksi, Lexcycle's chief operating officer, agrees that the midlist will suffer in coming years. "There's going to be less support for smaller writers in the traditional publishing model, in the big buildings in Manhattan," he explained. "But self-publishing and digital books haven't been considered. This upheaval will cause many authors to look at the alternatives more seriously." The Stanza reader, for instance, stocks thousands of e-books at varying prices, from free public domain books to self-published titles to 40,000 titles from Fictionwise, one of the leading digital book vendors. That list includes a variety of bestsellers like David Wroblewski's "Story of Edgar Sawtelle," Stephenie Meyer's "Twilight" series and the nonfiction hit "Dewey: The Small-Town Library Cat Who Touched the World. "

Rumors of publishing's demise are probably overstated, but the future of publishing may depend on what those laid-off editors, publicists and industry leaders do next. The morning after Black Wednesday, a publishing blogger and e-book aficionado named Mike Cane stirred up his readers with a bite-size manifesto on Twitter: "If the FIRED NY pubstaff are such hot fucking shit, let them coalesce and form an EBOOK-ONLY IMPRINT to crush their fmr employers." However callous this Twitter-versy seemed at the time, it posed an interesting challenge: Can the publishing world channel all of this collective anger, bewilderment and fear into industry-altering strategies?

"If the last five or 10 years have shown us anything, it's this: content will get out," Lexcycle's Choksi says. "With social networking and blogs, if you have something to say, it will get heard. It just might not look like the traditional publishing model you are used to."

Jason Boog is a journalist and author of "Born Reading: Bringing Up Bookworms in a Digital Age"