"Happy-Go-Lucky" and the ignored romantic comedy "Ghost Town" were among those that reminded us why films are still worth looking at. 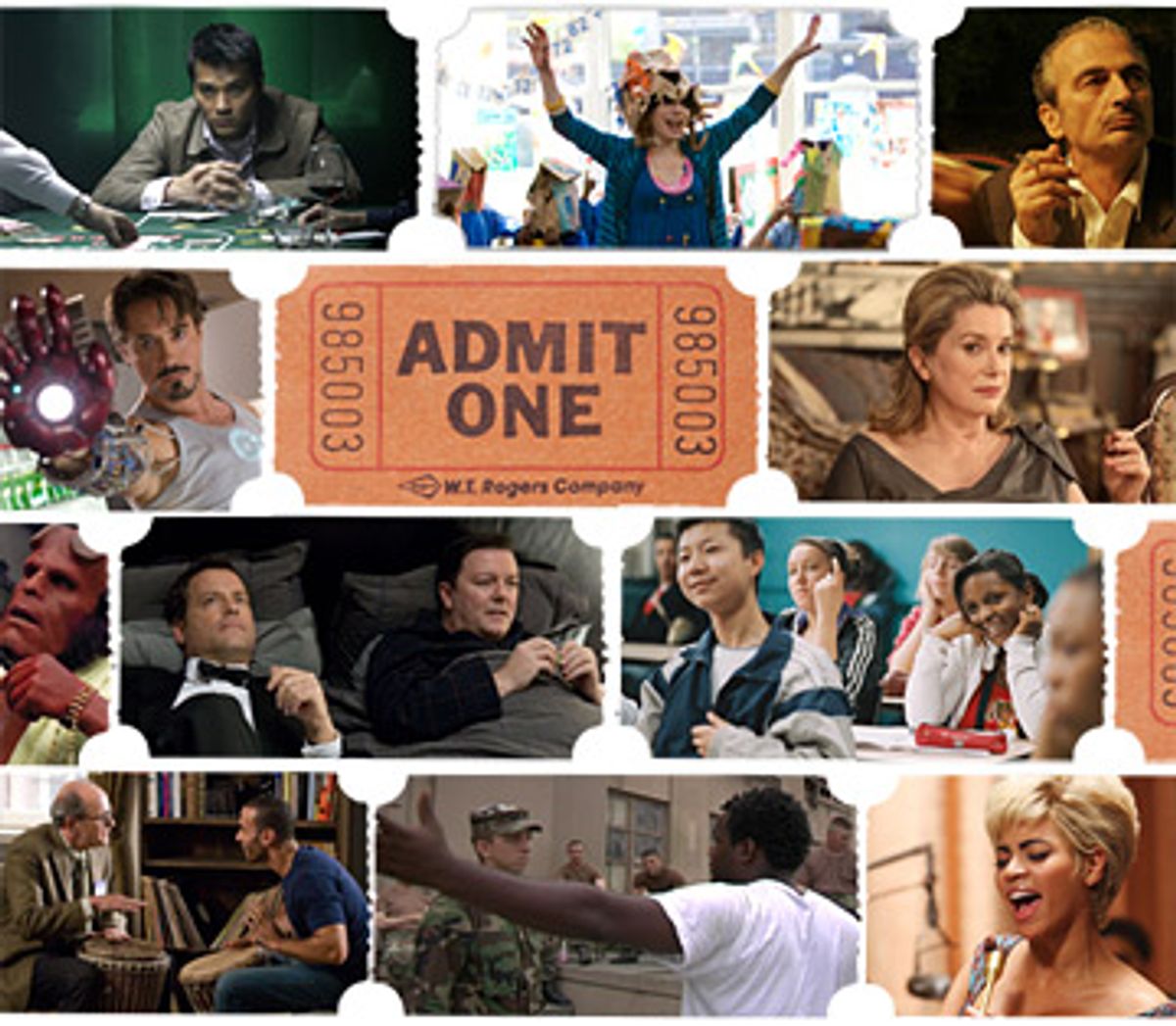 The worst part of coming to the end of a year of movies is trying to pull together some meaningful thesis statement to put it all in perspective. You could say 2008 was the year everyone went out to the movies, to see "The Dark Knight." Or 2008 was the year almost no one went out to the movies, except to see "The Dark Knight." There are granules of truth in both of those sentences, but neither comes close to conveying the range of movies -- domestic and imported -- that most of us had the opportunity to see this year, either in our local theaters or courtesy of Netflix.

There's almost never a satisfying way to sum up a year of movies, particularly when you're just emerging from that year and still trying to digest the significance of all the big December releases -- or, perhaps more accurately, the lack of significance. Supposedly, all the great performances are revealed in the big Christmas movies, pictures like "Revolutionary Road," "The Curious Case of Benjamin Button" and "Frost/Nixon." But while I do think those movies include some good performances, when I look back, I realize that the performances that meant the most to me -- like that of Sally Hawkins in Mike Leigh's "Happy-Go-Lucky" or Robert Downey Jr.'s in Jon Favreau's "Iron Man" -- were doled out, like small, welcome surprises, in earlier months. These are performances that work perfectly without trying too hard.

My list of favorite movies, listed below in something close to order of preference, is, as always, unapologetically subjective. Some of your own favorites may be on it, and others will not. But if my list prompts you to look back and define for yourself why movies are still worth looking at -- as, unquestionably, they are -- and helps determine what meant the most to you this year, it will have done its job.

"Happy-Go-Lucky" -- I first saw "Happy-Go-Lucky" in Berlin last winter, and I loved it so much, and with so few reservations, that I thought surely a second viewing would reveal some cracks. No dice. Mike Leigh's story of an exceedingly cheerful North London schoolteacher -- played by Sally Hawkins, in the finest performance of the year -- is an intimate masterpiece, the kind of picture that's so effortlessly multilayered that it's in danger of being called "light." "Luminous" is the better word.

"A Christmas Tale" -- French filmmaker Arnaud Desplechin's movies work a weird kind of magic. In "A Christmas Tale," Catherine Deneuve plays the matriarch of a splintered family who discovers she needs a bone-marrow transplant. So the various family members (and potential donors) descend upon the family homestead, bringing their conflicts and their neuroses with them. It may sound like a formulaic conceit, but Desplechin's mode of filmmaking has a kind of sawtooth lyricism: The humor is jagged and painful in places, but that's how Desplechin cuts to the heart of familial love. What he shows us may not always be pretty; but it's unfailingly beautiful.

"Ghost Town" -- Every year, friends and fellow movie lovers ask me the same question: Why can't anyone make a good romantic comedy anymore? Then David Koepp -- a writer and filmmaker who has worked frequently with Steven Spielberg -- comes up with one that's close to perfect, and almost no one sees it. "Ghost Town" drifted into and out of theaters earlier this fall with the quiet stealth of a specter. Maybe not many people were interested in seeing Ricky Gervais as a romantic lead, or Greg Kinnear as a dapper ghost in a tux, or Téa Leoni as a confused widow -- but I suspect that a lot of people simply didn't know about "Ghost Town" until it was too late. Well, now you know. Koepp and his actors honor the spirit of Preston Sturges, proving he's more than just a forgotten ghost.

Cadillac Records -- Darnell Martin's story of the founding and flowering of the legendary Chicago label Chess Records elides some of the facts -- and yet gets the spirit exactly right. It doesn't hurt that the performances -- from the likes of Eamonn Walker, Columbus Short, Mos Def, Jeffrey Wright and, especially, Beyoncé Knowles (as Etta James) -- are superb. This is what it means to make a picture that's alive.

"The Class" -- Since Laurent Cantet's "The Class" took the top prize at Cannes earlier in the year, I've heard a surprising number of my fellow critics talk about it as a typical "triumph over adversity in the classroom" story, a highbrow "To Sir, With Love." But Cantet's drama, which stars real-life teachers and students and takes place over the course of one year in the classroom of a tough Paris suburb, is less about the big victories of teaching than it is about the frustrating imperfection of even the small ones. In "The Class," the classroom isn't a safe place isolated from the outside world, but a miniature universe where disparate people from that outside world come together, with all the conflicts and revelations that that kind of messy mingling implies. It's a hopeful movie -- but not a smug one.

"The Visitor" -- Because marketing campaigns and marquee names are always jockeying for our attention in the movie universe, sometimes we forget that acting and filmmaking are two of the things we go to the movies for in the first place. Tom McCarthy's "The Visitor" -- in which veteran character actor Richard Jenkins gives a marvelous performance as a 60-ish widowed professor who befriends two illegal immigrants living in New York -- helps put everything back in perspective. Eloquent and unassuming, "The Visitor" hits home precisely because it doesn't overreach its grasp.

"Before I Forget" -- In "Before I Forget," Jacques Nolot (the French actor who is both director and star here) plays Pierre, a 60-ish former hustler living alone in Paris who's been HIV-positive for more than 20 years. He's survived many of his friends, but what does it mean to be a "survivor" when, in the end, the aging body you live in is going to betray you anyway? Pierre faces that inevitability with grace and good humor, but also with a realistic dose of mournfulness. Nolot has made one of the loveliest and most unflinching films about aging -- and about makeshift families -- I've ever seen.

"Trouble the Water" -- Filmmakers Tia Lessin and Carl Deal went to New Orleans, post-Hurricane Katrina, to make a film about the National Guard. They found an even greater subject when they ran into Kim and Scott Roberts, two self-described "street hustlers" from the Ninth Ward. Kim, an ebullient aspiring rap artist, had captured the hurricane's before, during and after with her video camera. Deal and Lessin helped shape the footage into a document that explains, without spelling it out in so many words, what it means -- or what it ought to mean -- to be an American.

"Sparrow" -- Maybe it's cheating to put an unreleased movie on a 10-best list, but in this case, I think it's justified cheating: Johnnie To's "Sparrow" didn't get a theatrical release in the United States, but at least you can watch it at home -- the DVD is available from DVDAsian.com and other vendors, and it's also available on Blu-Ray. More a musical than an action movie, "Sparrow" -- which details the adventures of a glam but broke gang of pickpockets -- borrows the mood, color and vitality of pictures like "Singin' in the Rain," "The Band Wagon," "An American in Paris" and even Jacques Demy's "The Young Girls of Rochefort." And its finale, a ballet of twirling umbrellas and graceful sleight-of-hand pirouettes, is one of the most gorgeous dance numbers I've ever seen.

"Iron Man" and "Hellboy II" -- I'm not alone in thinking that 2008 was a great year for movies based on comic books, although I am alone, almost, in believing that "The Dark Knight" was the worst of them. Jon Favreau and Guillermo del Toro gave us two sterling and very different examples of how to make great, passionate comic-book movies -- including action sequences that make visual sense.