Vivid Arab-French immigrant yarn "Secret of the Grain" is a near-masterpiece; fascinating Brecht documentary "Theater of War" describes one. 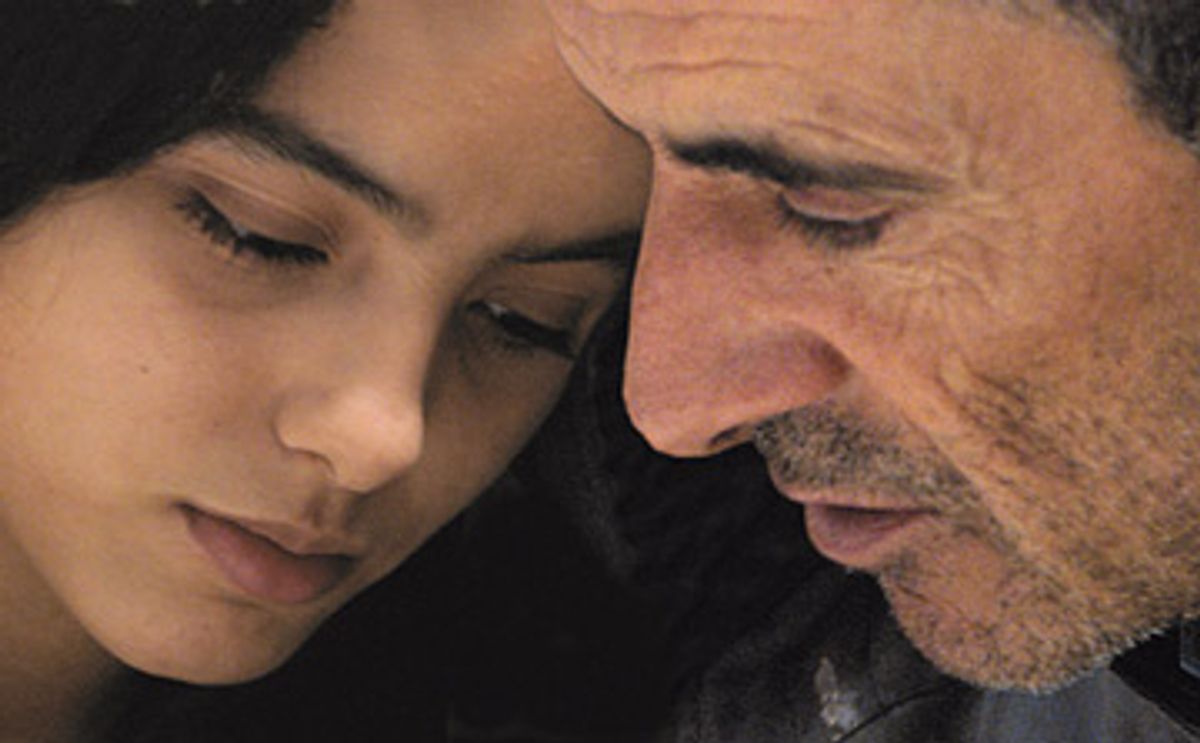 Hafsia Herzi (left) and Habib Boufares in "The Secret of the Grain."

You can tell it's a French film when one of the actresses gets naked inside five minutes. But in the case of Abdellatif Kechiche's richly enjoyable and consistently surprising "The Secret of the Grain," that first naked-chick scene is deceptive. If I tell you that the movie starts with a buxom honey-blond enticing the handsome tour guide below decks on a Mediterranean port-city cruise for a little hands-on demonstration, and that it ends with a teenage girl staging her sexual awakening in public, in the form of a vigorous belly-dance performance in a crowded shipboard restaurant, you'll think, oh, it's that kind of European film.

Except that it isn't. "The Secret of the Grain" is much more the other kind of European film, one that appears plotless and unstructured and is actually finely honed and sharply pointed, one that tries to combine tragedy and comedy and social observation and human fallibility and adventuresome technique into one ungainly and beautiful package. Those two scenes that bookend the film are the only remotely sexy scenes in it. In between Kechiche offers a saga of a laid-off immigrant shipyard worker pursuing an impossible dream, set against a bewildering welter of extended-family conversation, shot with a handheld camera in tight quarters, which you just have to ride until it starts making sense.

There's talk about the fading maritime economy in this unnamed French port city (it's actually Sète, the same town where Agnès Varda shot her 1954 debut film, "La Pointe-Courte"), talk about the difficulty of toilet-training 2-year-olds, a long family-dinner sequence over bowls of Mama's delicious fish couscous, livened up by the non-sequitur repartee and inside jokes people share at family dinners, a meeting with a banker to file a loan application (sure to be rejected) and a painful exploration of the toll the aforementioned handsome tour guide's womanizing takes on his family.

There's no question that Kechiche's film was massively popular in France (where it swept most major categories in the Césars, or French Oscars, last year) partly because it depicts the Arab immigrant experience in a country currently wrestling with the meaning and cost of multiculturalism. Slimane, the laconic but tenderhearted 60ish shipyard worker wonderfully played by nonprofessional Habib Boufares, came to Sète many years ago from an unspecified North African country. (Kechiche himself, who is 48, was born in Tunisia.) Although his children and in-laws and grandchildren are French-speaking native-born citizens, they remain outsiders in a caste system based on race, language and ancestry that is all the more insidious because it officially does not exist and is never discussed.

But an even better reason for the popularity of "Secret of the Grain" is that it's a movie that's so damn French, about people who've become so damn French, couscous and all. When two of Slimane's sons encourage him to take his severance pay and go back to the "old country," he only pretends to pay attention. He understands it's much too late for that. Jean Renoir and Max Ophüls would have completely flipped for this film. It isn't a social-agenda movie or a group-grievance movie; it's a fabulously vivid and interesting family chronicle about an idiosyncratic group of people in a marginal social position, whose bickering and pettiness and suffering and nobility are likely to remind you of your own family and me of mine. (By the way, the English title is pretty much an art-house mannerism. Kechiche's French title simply means "the grain and the fish," i.e., the ingredients in seafood couscous.)

There's no point in me trying to identify the onslaught of characters and actors for you, since part of the delight in "Secret of the Grain" comes in gradually figuring out who's related to whom, and how and why they're feuding with each other. Suffice it to say that Slimane, who has a will of iron despite his perpetually downcast demeanor, has an ex-wife who cooks legendary couscous, multiple households full of lively, squabbling adult children and in-laws and grandchildren, and a rather high-minded younger girlfriend who runs the residential hotel where he lives. Despite all that, his most intimate relationship seems to be with his girlfriend's daughter, the irrepressible, foulmouthed Rym (Hafsia Herzi), who'll be damned if she lets her mom dump this guy, even if his agonizing quest to turn an abandoned old freighter into an upscale couscous restaurant -- with his ex-wife as star chef -- is both doomed and hurtful.

This is a movie that flirts with all sorts of art-house clichés -- for God's sake, it's a movie whose key plot points involve ethnic cooking and erotic dancing -- but never comes anywhere near succumbing to them. This is the first Kechiche film I've seen, but I'm massively impressed with his breadth of vision, his compassion and his evenhanded balance of tragedy and comedy. He loves these people without reservation, but also views their selfish and selfless struggles with the cold eye of a dramatist and a poet. In an ironic final twist, the true price of that naughty tour-boat adultery way back at the beginning of the film is revealed, but at the same time Slimane's long and ambiguous struggle to build a new life in a new land is rewarded.

"The Secret of the Grain" is now playing at the IFC Center in New York, with national release to follow. It's also available on-demand via IFC In Theaters on many cable-TV systems.

As I wrote last April from the Tribeca Film Festival, John Walter's graceful and often fascinating documentary "Theater of War" seems tailor-made for a particular grade of literate, upscale New York audience but is exceedingly unlikely to play in the heartland. That said, there are would-be New Yorkers and quasi-New Yorkers everywhere these days, so maybe this thinky-pic engaging the legacy of antiwar agitprop experimental theater and in particular the case of radical German playwright Bertolt Brecht will reach a wider public after its current launch at Manhattan's Film Forum.

Film critics and other tagalong intellectuals often use the adjective "Brechtian" as a lazy way of describing any dramatic tactic that violates the conventions of naturalism or confronts the audience directly. But we don't often think much about the guy who lent his name to that adjective, or what those fourth-wall ruptures meant to him. Walter's movie bites off way more than it can chew, albeit in agreeable fashion, by trying to cover the basics of Brecht's life and work -- including his brief American career and his historic collision with the House Un-American Activities Committee -- while going deeper into the history of his devastating antiwar play "Mother Courage and Her Children," memorably produced in Zurich in 1941 and then in East Berlin in 1949.

This is both a historical film and a backstage documentary, taking us inside the creation of the Public Theater's 2006 revival of "Mother Courage" in a new translation by Tony Kushner, a production that starred Meryl Streep and was directed by George C. Wolfe. For anyone interested in the continuing relevance of theater in a society dominated by momentary electronic impulses, in the responsibility of artists in wartime and in the greatest anti-capitalist, anti-government, antiwar and anti-romantic playwright of the 20th century, Walter's cool, capable, stimulating exploration is a must. Scenes of Streep, Wolfe and the cast in rehearsal are fascinating, and I especially appreciated Walter's wry, Brechtian digressions into the less-heralded work of the costumers and prop-makers.

Brecht himself might bitterly appreciate the irony that the only people likely to see "Theater of War" are those already likely to agree with its evident views about Brecht, about radical art, about the validity of Marxist modes of analysis, and so on. There's a good deal more to say about the 20th century's greatest anti-capitalist, anti-government, antiwar and anti-romantic playwright that isn't in this movie, in fact. None of that is Walter's fault; if anything, a great strength of "Theater of War" is that, in the spirit of its subject, it gets you thinking about a lot of questions not easily answered.

How and why did Brecht's plays, constructed to combine popular culture and the avant-garde, become the exclusive province of the left-wing intelligentsia? Is his influence on contemporary culture just a question of facile formal tricks or something more profound? (Brecht's desire to divorce the audience from the action and compel rational reflection, rather than draw the audience into the story and compel catharsis, marks a division in the history of dramatic art that still bothers us today.) And after his courageous defiance of Nazism and McCarthyism, why did Brecht accommodate himself so readily to the communist regime in East Germany?

"Theater of War" is now playing at Film Forum in New York. Other cities may follow.