Marty Peretz and the American political consensus on Israel

The New Republic Editor-in-Chief expresses anti-Arab hatred in the starkest terms possible, but are his policy views towards Israel any different from the standard American position?

Opinions about the Israeli-Palestinian dispute are so entrenched that any single outbreak of violence is automatically evaluated through a pre-existing lens, shaped by one's typically immovable beliefs about which side bears most of the blame for the conflict generally or "who started it."  Still, any minimally decent human being -- even those who view the world through the most blindingly pro-Israeli lens possible, the ones who justify anything and everything Israel does, and who discuss these events with a bottomless emphasis on the primitive (though dangerous) rockets lobbed by Hamas into Southern Israel but without even mentioning the ongoing four-decades brutal occupation or the recent, grotesquely inhumane blockade of Gaza -- would find the slaughter of scores of innocent Palestinians to be a horrible and deeply lamentable event.

But not The New Republic's Marty Peretz.  Here is his uniquely despicable view of the events of the last couple of days:

So at 11:30 on Saturday morning, according to both the Jerusalem Post and Ha'aretz, as well as the New York Times, 50 fighter jets and attack helicopters demolished some 40 to 50 sites in just about three minutes, maybe five. Message: do not fuck with the Jews.

"Do not fuck with the Jews."  And what of the several hundred Palestinian dead -- including numerous children -- and many hundreds more seriously wounded?

Israeli intelligence reported 225 people dead, mostly Hamas military leaders with some functionaries, besides, and perhaps 400 wounded. The Palestinians announced 300 dead, probably as a reflex in order to begin their whining about disproportionate Israeli acts of war. And 600 wounded.

Objections to the Israeli attack are just "whining."  Those are the words of a psychopath.  And what to do now?

Frankly, I am up to my gullet with this reflex criticism of Israel as going beyond proportionality in its responses to war waged against its population with the undisguised intention of putting an end to the political expression of the Jewish nation. . . .

The current warfare will go on a bit longer. If there is a pause and if I were giving advice to the Israelis, this is what I would say to Hamas and to the people of Gaza: "If a rocket or missile is launched against us, if you take captive one of our soldiers (as you have held one for two and a half years), if you raise a new Intifada against us, there will be an immediate response. And it will be very disproportionate. Proportion does not work."

This super-tough-guy warrior -- whose prime accomplishment in life was marrying an heiress and then using her family's money to buy himself The New Republic -- beats his chest and threatens that even a single Palestinian act in response to this bombing campaign will provoke still more massive retaliation in the form of collective punishment (which, not that anyone cares, happens to be a clear violation of the Geneva Conventions, as are Hamas' far less harmful rocket attacks on Israeli civilians).

It may be true that, as Eric Alterman put it in his seminal article on Marty Pertez (quoting Ezra Klein), "Peretz is rarely held to account, largely because there's an odd, tacit understanding that he's a cartoonish character and everyone knows it."  But how unusual are Peretz's views, revolting as they are, in the American political mainstream?  He certainly expresses anti-Arab hatred and bigotry more bluntly than most, but this reflexive support for anything and everything Israel does is anything but unique in our political debates.

Here, as but one illustrative example, is Caroline Kennedy -- who, in order to win her Senate seat, is self-consciously trying to turn herself into a Barack Obama clone -- responding recently to a question about Israel from Politico:

QUESTION 8: Do you think Israel should negotiate with Hamas? Do you agree with Israel's Gaza Strip embargo? Would you support an Israeli airstrike on Iran if they felt Tehran's nuclear program represented a threat to their survival?

ANSWER: "Caroline Kennedy strongly supports a safe and secure Israel. She believe Israel's security decisions should be left to Israel."

What could be more absurd than that?  Apparently, not only should we continue to feed Israel billions of dollars a year of American taxpayer money and massive amounts of weapons -- thereby ensuring that the world, quite accurately, perceives their actions as American actions -- but we should then take the position that they are free to do anything they want with it, no matter how extreme or destructive to our interests, and our only view on all of it should be that we blindly support whatever they do.  Or, as Clinton aide Ann Lewis put it during the primaries, in response to Obama's observation that he needn't have a "Likud view in order to be pro-Israel":

The role of the president of the United States is to support the decisions that are made by the people of Israel. It is not up to us to pick and choose from among the political parties.

Yesterday, the Bush administration applied this mindset, naturally, by expressing unequivocal support for Israel and heaped all blame on Hamas.  And, needless to say, Democratic House Speaker Nancy Pelosi echoed the administration's view:

Speaker of the US House of Representatives Nancy Pelosi issued a statement concerning the Israeli operation in Gaza in which she wrote that "When Israel is attacked, the United States must continue to stand strongly with its friend and democratic ally."

According to Pelosi, "Peace between Israelis and Palestinians cannot result from daily barrages of rocket and mortar fire from Hamas-controlled Gaza. Hamas and its supporters must understand that Gaza cannot and will not be allowed to be a sanctuary for attacks on Israel."

Not a word of condemnation of the Israeli blockade -- which has caused extreme suffering and deprivation in Gaza -- or of the massively disproportionate response or the ongoing and ever-expanding Israeli occupation.  It is all one-sided support for whatever Israel does from our political class, and one-sided condemnation of Israel's enemies (who are, ipso facto, American enemies) -- all of it, as usual, sharply divergent from the consensus in much of the rest of the world.

It would be nice if U.S. citizens weren't connected to and responsible for every Israeli military action, so that we really could and should take the attitude that what the Israeli Government does -- or what is done to it -- is not our responsibility.  That's how it should be.

Instead, since we fund a huge bulk of it and supply the weapons used for much of it and use our veto power at the U.N. to enable all of it, we are connected to it -- intimately -- and bear responsibility for all of Israel's various wars, including the current overwhelming assault on Gaza, as much as Israelis themselves.  Blind support for whatever they do -- the consensus view in American political life in both parties -- is therefore a total abdication of our responsibility. 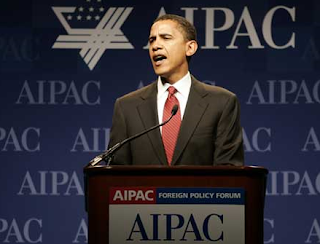 It remains to be seen if Barack Obama intends to deviate even a small amount from what has been decades of excessively loyal U.S. support for Israel -- which, over the last eight years, transformed into truly blind and absolute support for anything they do.  It's impossible to know for sure until Obama is inaugurated, but the bipartisan, purely "pro-Israel" statements issued by his allies -- such as Caroline Kennedy and Nancy Pelosi -- don't bode well, nor do the statements which Obama himself made during the campaign, as compiled yesterday by Salon's Mark Schone:

The first job of any nation state is to protect its citizens. And so I can assure you that if -- I don't even care if I was a politician -- if somebody was sending rockets into my house where my two daughters sleep at night, I'm going to do everything in my power to stop that. And I would expect Israelis to do the same thing.

Can't the exact same mentality be deployed to justify everything Hamas has done and is doing, to wit:  "if a foreign power were brutally occupying my country for four decades -- or blockading my country and denying my children medical needs and nutrition and the ability even to exit -- I'm going to do everything in my power to stop that.  And I would expect Palestinians to do the same thing"?  But the last thing that our political class ever extends is reciprocal, two-sided analysis to this dispute.

The suffocating bipartisan orthodoxies in the U.S. regarding Israel thus make virtually impossible what the new Jewish-American group, J Street -- in condemning the attack (even while calling it "justifiable") because it "will deepen the cycle of violence in the region" -- urges:  "immediate, strong diplomatic intervention by the United States, the Quartet and allies in the region to negotiate a resumption of the ceasefire."  Most of our political elites know enough to avoid the ugly language of Marty Peretz, but the ultimate policy positions aren't much different.

UPDATE:  Without necessarily endorsing all of it, I want to recommend very highly this column by Israeli Gideon Levy in Haaretz, entitled "The neighborhood bully strikes again."  What's most striking about it is that this scathing criticism of Israel's behavior can -- and does -- appear in one of Israel's leading newspapers, but not a paragraph of it could ever be uttered by any American politician, in either party, of any national prominence.

Israel has a right, indeed a duty, to defend itself in response to the hundreds of rockets and mortars fired from Gaza over the past week. No government in the world would sit by and allow its citizens to be subjected to this kind of indiscriminate bombardment. The loss of innocent life is a terrible tragedy, and the blame for that tragedy lies with Hamas.

One can travel from the farthest right fringe of the GOP to the heart of the Democratic Party leadership and hear exactly the same thing:  Israel is always right.  Israel must not be criticized.  Israel never bears any blame.  Any action taken by Israel is justified.  No matter the situation, that just gets repeated over and over like some hypnotic bipartisan mantra.  Meanwhile, American citizens overwhelmingly -- 71% -- want their Government to be "even-handed" in the Israeli-Palestinian conflict.  Yet that view is simply ignored, disregarded, not even viable for any American mainstream political leader to express.