Why Israelis support the Gaza offensive

Israel's post-traumatic war is not just about stopping Hamas rockets, but about repairing reputations -- and erasing the stain of failure. 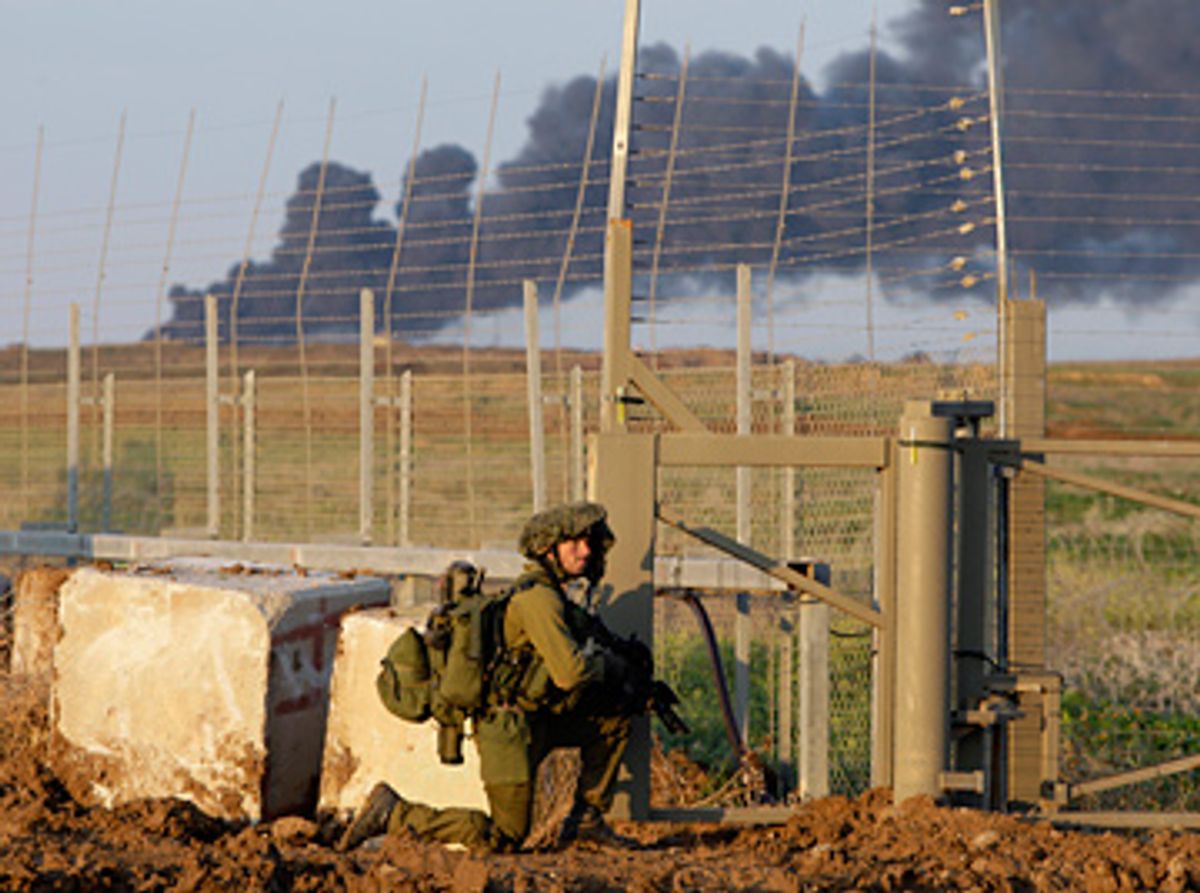 If there is one issue separating Israel from its role models in the West, it is the perceived legitimacy of using force. In Europe, and in many parts of American public opinion, military power is seen as an option of last resort; a primitive, old-fashioned and often counterproductive tool of policy. To us, hitting our enemies once in a while feels like a necessary behavior in a tough neighborhood. It may backfire, as it often does, but still, most Israelis believe it's impossible to survive in the Middle East without resorting to occasional aggression.

That is why in Washington, London or Paris, governments must sweat to build political consensus for going to war, while in Jerusalem, war resolutions enjoy wide parliamentary support. Israeli governments find it hard to pass peace treaties through the Knesset. That's where political difficulty lies.

Israel's military operation against Hamas in Gaza, now in its 10th day, is an excellent example of this rule. The war enjoys strong public support among Israel's Jewish majority. Only Israel's Arabs, identifying with their Palestinian brothers, and the far political left, which is all but pacifist, have protested against it. All the rest have united behind the government, including the more established left. The novelist Amos Oz, a moral compass for Israel's peace camp (and an eventual critic of the 2006 war in Lebanon), gave his blessing to the war.

Israelis believe that operation "Cast Lead" in Gaza is a justified war of no choice against an extremist, uncompromising enemy. Hamas and its smaller proxies have targeted Israel's towns and villages near Gaza for several years with thousands of rockets and mortar bombs. They kept rocketing even after Ariel Sharon evacuated Israel's settlements and forces from the Gaza strip in 2005. Lacking a credible response, or an anti-rocket technology, Israel appeared helpless against a primitive weapon, which killed relatively few people, but disrupted life for hundreds of thousands.

The common narrative here involves self-justification with insult. "No other country would have absorbed thousands of rockets on its territory without retaliation" is the way most Israelis analyze the situation. "We pulled out of Gaza, and they thanked us with shells and rockets" is another widely used explanation. Bombing and invading Gaza to "teach them a lesson" follows this logic naturally.

To its credit, Prime Minister Ehud Olmert's government has built its case for attacking Gaza, both domestically and internationally, by showing restraint for a long time and agreeing to a truce that lasted several months. Hamas, with its Islamist ideology and Iranian alliance, has very few friends. This explains the global support of Israel's actions. There may be protests in the streets in Arab nations and European capitals, but note the lazy pace of diplomatic efforts to call a cease-fire. Egypt, which previously mediated between Israel and Hamas, and brokered the ill-fated truce, all but gave Israel a green light to crush Hamas. Only after the beginning of the ground offensive did Cairo express uneasiness.

Nevertheless, beyond its immediate political-military context, the current war serves a deeper need for Israelis: recovering from the trauma of our debacle in Lebanon in 2006. We grew to believe that our military is invincible, and whenever it fails to fulfill our expectations, we feel defenseless and doomed. The only way out of it is to go for another round and hope for better results. It is not a new idea, nor does it necessarily work: In 1982, leading the invasion of Lebanon, Prime Minister Menachem Begin boasted that it "cured the trauma of the Yom Kippur War" nine years before. As it happened, Begin's operation soured, creating a new and lasting national trauma. But Israeli governments keep trying.

Gaza is Olmert's second chance. The similarities are striking. As in 2006, Israel is fighting an Islamic group that grew from a small terrorist organization to a quasi-state, expelling Israeli forces from its territory in the process. In both cases, the enemy hit Israel's population with rockets, and the Israel Defense Forces proved incapable of stopping it.

But here the analogy ends. In 2006, Israel went to war unprepared, didn't know when to stop, and failed to defeat several hundred fighters of Hezbollah. Overall, it was an embarrassing show of military incompetence. This time, the military planned and practiced in advance. Its political masters have learned their lesson, and went by the checklist of the post-Lebanon commission of inquiry. This resulted in more modest goals, and in media shyness. And most important, the enemy is weaker this time, as evidenced by its smaller firepower. Unlike Hezbollah, which enjoyed the hilly terrain of Lebanon and open lines of supply via Syria, Hamas is encircled in the small enclave of Gaza, where Israel controls the gates. Egypt has kept the Rafah crossing, which connects it with Gaza, closed in order to prevent a spillover of Gaza's troubles onto Egyptian territory.

The opening move of the Gaza operation, on Dec. 27, reminded Israelis of their glorious military past. War was in the air for several days, following the collapse of the truce, but everybody expected some ground incursion. Instead, Israel's air force surprised by attacking dozens of targets simultaneously, killing hundreds of Palestinians in a matter of a few minutes. The military equated the attack with its most successful operation ever, the destruction of Egypt's air force in the opening move of the 1967 Six Day War. The analogy is doubtful, as Hamas lacks any air defenses, but it shows the craving for success in the military.

The first day was exhilarating. Israelis saw the IDF as they want to remember it, smart, daring and vengeful. The subsequent and ongoing ground operation, launched after several days of hesitation, serves a similar psychological motive. The enemy ridiculed Israel for relying on its air power, fearing the inevitable casualties of ground war. The military wanted to smash this cowardly image.

How long will it last? Public support will wane if the number of casualties grows, or if the military is stuck in a pointless war of attrition. Or if something goes terribly wrong, as in Lebanon. The government would like to end the operation by next week, leaving a clean table for President Barack Obama. It hopes to make Hamas raise a white flag, by killing more of its fighting force. Bringing down Hamas' rule in Gaza is beyond the scope of the current operation. Israel would like to see Hamas weakened, not destroyed. After all, given the state of Fatah, it's the only power that can take care of Gaza with some responsibility. With Hamas gone, Israel might have to deal with a Somali-style cauldron of gangs and warlords.

This means that strategically, the Gaza war will probably end up as a blip, rather than as a historic turning point. It is another one of Israel's long list of cross-border operations, rather than an effort to turn the tide on Islamic extremism. At best, Israel's government hopes to scale back the rocket-launching capabilities of Hamas and weaken its military arm. This should lead to the sort of armed coexistence that Israel has with Hezbollah in the north. In other words, Israel is buying time.

Domestically, too, the war will hardly change the political reality. Israel went to war in the midst of an election campaign. Olmert, the prime minister, resigned under corruption allegations, and is not running for reelection. He only wants to repair his reputation from the Lebanon damage. His partners in the decision-making War Trio, Defense Minister Ehud Barak and Foreign Minister Tzipi Livni, are leading rival parties, Labor and Kadima, which compete for the center-left constituency. Billboards in Israel are showing the two, often side by side, with amazingly similar slogans (Barak is "looking at the truth" and Livni is "speaking the truth"). In the first week of the war, Barak gained support in the polls, but he is still lagging behind as an aspiring national leader. Even if the Gaza ground operation ends in some glorious victory, it will probably be too late for Barak to change the national sentiment before the Feb. 10 election.

Given the division on the left, the election front-runner remains Binyamin Netanyahu, leader of the right-wing Likud party. As opposition leader, Bibi is out of the decisions loop, serving instead as a TV propagandist for Israel. Nevertheless, he can use the war to his advantage, arguing that Olmert et al. were merely following his advice. The polls indicate, however, that the war may enable the left to prevent a right-wing majority in the Knesset. This means that Israel's next government will probably be a right-center one, in which Netanyahu shares power with Barak, or Livni, or both.

How will all this affect Obama's expected effort to reenergize the Israeli-Palestinian peace process? On one hand, the Gaza war is showing that Israel can stand up to its enemies, thus strengthening national self-confidence. Alas, the war has also shown that there is no credible way to stop rockets, as Hamas has launched them deeper into Israeli territory than ever before. At this backdrop, it will be difficult to build public support for a West Bank withdrawal. Israelis will be even more reluctant to expose Tel Aviv and the Ben Gurion airport to the possibility of rocket fire from the West Bank. The new American president will have to work hard to overcome this fear. Otherwise, Israelis will still find it easier to go to war than to wage peace.