Did I just buy an SUV?

I didn't mean to. I am an environmentalist. Really. But before I knew it, there it was, in front of my house. 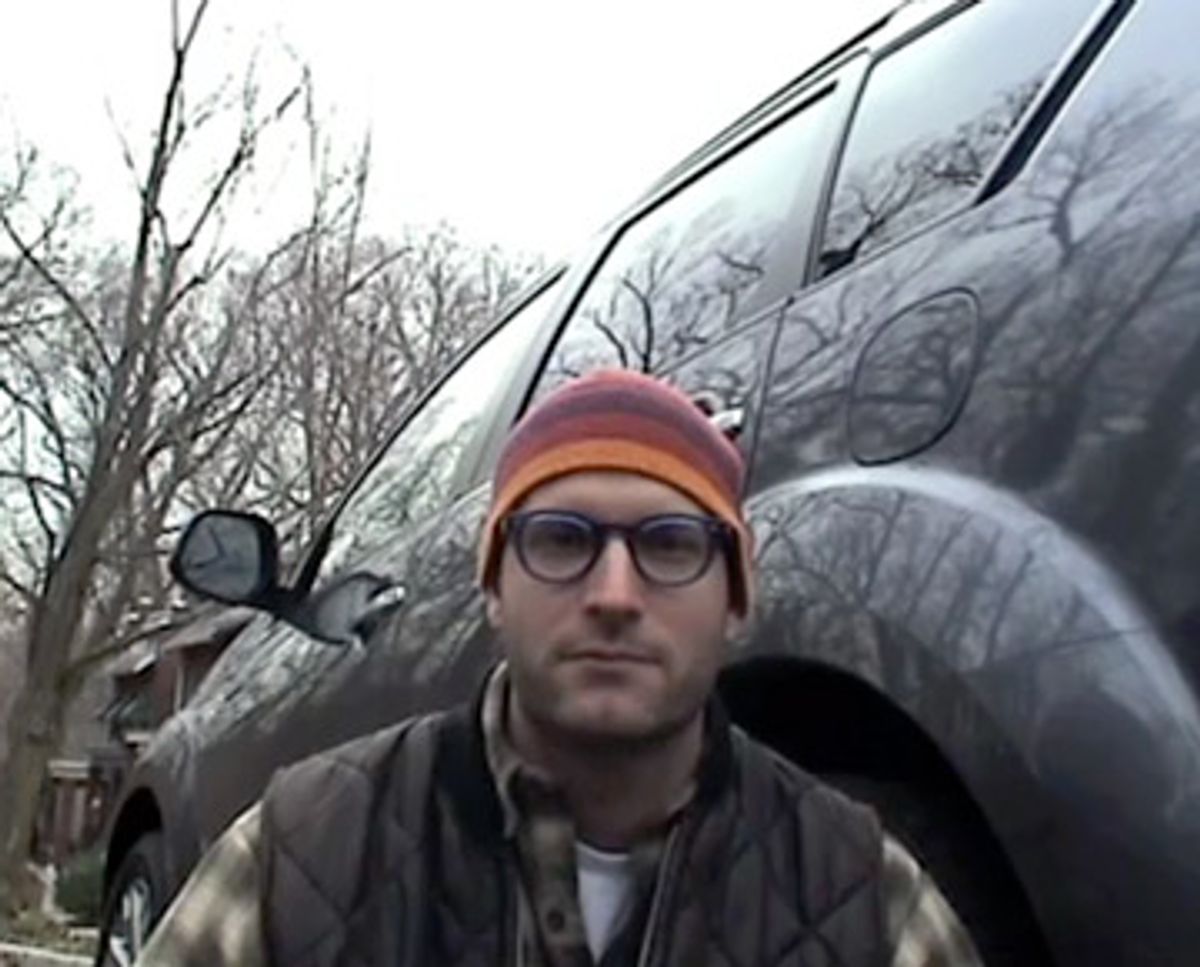 My wife and I sat in hard plastic chairs in one of those bland, nearly empty offices in the rear of the auto dealership showroom. At our backs, a wall of glass separated us from a cavernous room full of brand-new, improbably shiny vehicles wedged in at odd angles with stickers in the back-seat windows.

There wasn't much more than plain beige walls and a naked metal office desk. Not even a family picture. Car salesmen don't really need their own offices, I thought, just shared, temporary vestibules where they used to park potential prey during the attrition part of the negotiation; the "I've got to go ask my manager whether we can possibly make these numbers work" maneuver as they went out back for a cigarette.

That was back before the recession. Behold the cratering car industry: sales plummeting, dealerships failing. The salesmen will now dance naked for you.

We needed something bigger. We've got our two kids and we often haul around a couple of their friends. Throw in the dog and a couple of bags of groceries, and the station wagon quickly got too small. We needed a third-row seat.

No minivans, we agreed, though we didn't just come out and say that minivans are totally lame. We said things like, "I just don't like the way the space is utilized in a minivan."

We could never, however, drive an SUV, because they are unspeakably evil. I'm intimately familiar with liberal self-righteousness. I've been to the Unitarian Church. I've even flashed my own peacock feathers from time to time. I didn't eat meat in college, in part, I now think, just so I could say so.

I'm on the carbon wagon also. After all, Al Gore could be on to something with his PowerPoint thingy. My most recent major purchase prior to this car was actually an SUB, a sport utility bicycle, rigged out with massive panniers so I can haul everything from groceries to a 30-inch Weber grill around town without my car, thumbing my nose at the SUVs stuck in traffic. I ride my SUB to work every day -- and to the neighborhood farmers' market, where I buy locally grown produce. In the summer, I cook my curry-cream squash soup (am I turning you on, Volvo drivers?) in a solar oven. In short, I've been getting all Laurie David, all Ed Begley Jr. lately.

In the barren office off the car showroom floor, the deal was sealed for our new wheels. My wife and I leaned over the documents laid out neatly on the steel desk. There, on the first piece of paper, was the beautiful price we had so easily rammed down the salesman's throat. There was also some other data. Make: Mitsubishi. Model: Outlander. Type: SUV.

SUV? There must be some mistake. We were buying an SUV?

I felt a jolt, a pang, a slight tug in the gut. Was that shock? Guilt? Had my wife seen those three letters? I didn't make eye contact with her. We signed the document and moved on to the next one.

I was incensed. I wasn't buying an SUV; I was buying a new type of vehicle soothingly called a "crossover," as in, "You have crossed over into something that is not an SUV. So it's cool. Don't worry about it." It seems that the automakers have figured out that it is no longer cool to drive an SUV while the polar bears are jumping from ice floe to ice floe.

Crossovers are large, bulbous, trucklike vehicles elevated relatively high off the ground with large wheels. Most are four-wheel drive and come with a powerful six-cylinder engine, sort of like, well, an SUV's.

Although the documents you will sign on purchase still apparently contain those three bone-chilling letters, crossover ads peddle a carefully calibrated cake-and-eat-it-too message. They usually tout something like "SUV functionality with carlike handling." Others come right out and say you are not, by any means, buying a boring minivan but rather something akin too, but just short of, an SUV. One crossover I considered promised it all: "rally-bred performance, all-weather handling and great gas mileage." Considering that a "real" SUV might get 11 miles per gallon in the city, the idea that its first cousin might get 18 seemed faintly green. Some crossovers even offer hybrid engines, which increase the mpg to something more like 25.

That's the auto industry's version of getting all Laurie David on us. Buy a crossover. It's not an SUV. Then it isn't your fault that polar bears are likely to be relegated to stuffed-animal status within our lifetime.

The sales pitch is a delicate balance, however. The automobile industry still knows that some part of our psyche really does warm up to the completely irrational notion that you could, if you had to, pile your crampons and coils of rope into the back of your family vehicle and grind through muddy back roads on your way to go glacier climbing.

With crossovers, this suggestion is achieved almost subliminally, like an opaque naked woman nestled in an ice cube in a liquor commercial. You'll recall the Simpsons' SUV was called the Canyonero. ("Smells like a steak/Seats 35/Canyonero!") The automakers continue to whisper in our ears the promise of wilderness exploration by giving the crossovers names like Outlander, Highlander or Acadia. Go out! Go high! Go to Acadia National Park, you doughy office drone!

I did the crossover research. My dad has bought me subscriptions to Consumer Reports for more than 20 years. Every 10 years I read it when I'm looking for a car.

Within five minutes, literally, dealers from as far away as Baltimore were on the phone, falling all over themselves to offer me a lower price than that last guy who called. These days we're all afraid of losing our job. Car salesmen are terrified. I could hear the craven panic in their voices. Some of the guys selling domestic cars offered zero percent financing for six years. In case you are wondering, that's the rate your dad would've charged you if he wasn't trying to teach you a lesson about financial responsibility.

I started bouncing the price from one desperate man against another and the numbers just kept going down. I did not know they sold new cars this cheap. Any lower and they'd be accepting colored beads and seashells for a down payment. Soon I was turning bossy. Yes, I will be taking the built-in entertainment system at that price. And chrome wheels. And Bluetooth.

In a couple of days my wife and I, without leaving the comfort of our home, had decided on a car model, and a winning dealer had clawed his way to the front of the pack. The final deal -- including taxes, tags and destination fees -- made me, almost, feel bad for the guy. I wanted the entire paperwork ready when I walked in the door. There would be no waiting around in those hard plastic chairs while the salesman lights up out back.

Signing off on my new SUV (There. See? I wrote it) was a shock. But when I climbed into the high cockpit, the cushy seats had a surprisingly analgesic effect on my conscience. The quiet of the cabin at highway speeds was gentle on my ears. And the view is great from up there, way above the tiny little cars.

Here is the dirty little secret about SUVs: They're horrible for everyone except the guy in the passenger seat. Then they are great. And what a deal! Too bad SUVs are killing the planet.

My wife and I have been hard at work on our argument that -- despite what it says on the legal documents -- we did not purchase an SUV. When we brought it home, however, and my wife peered out the front window at the behemoth at the curb, she couldn't help herself. She spoke the truth aloud. "It looks really big," she said. "Wow. Did we buy an SUV?" Mostly we try not to think about it, just as we try to convince ourselves we weren't swayed by the plunging price of gas, which was well below $2 a gallon the day we drove to the dealer. (Though, you know, that is cheap, and with this recession, it'll probably stay cheap, and ... Oh. Sorry.)

For now, our (feeble, self-justifying) argument for buying the Outlander instead of, say, a Ford Escape Hybrid, goes kind of like this: We selected a two-wheel drive version with only a four-cylinder engine, instead of the more gas-guzzling six-cylinder variety. It gets better mileage than the supposedly crunchier car it replaced, the Volvo. And it weighs only 3,600 pounds, not three tons like a "real" SUV. It's 15 feet long, not 18 and a half. Why, I can't even fit my SUB in the back of my so-called SUV! That's all we've got so far. We're still working on it.