Is Caroline Kennedy "opting in"?

Despite what the New York Times Magazine argues, the wannabe senator's crass play for political power doesn't teach us much about moms reentering the workforce. 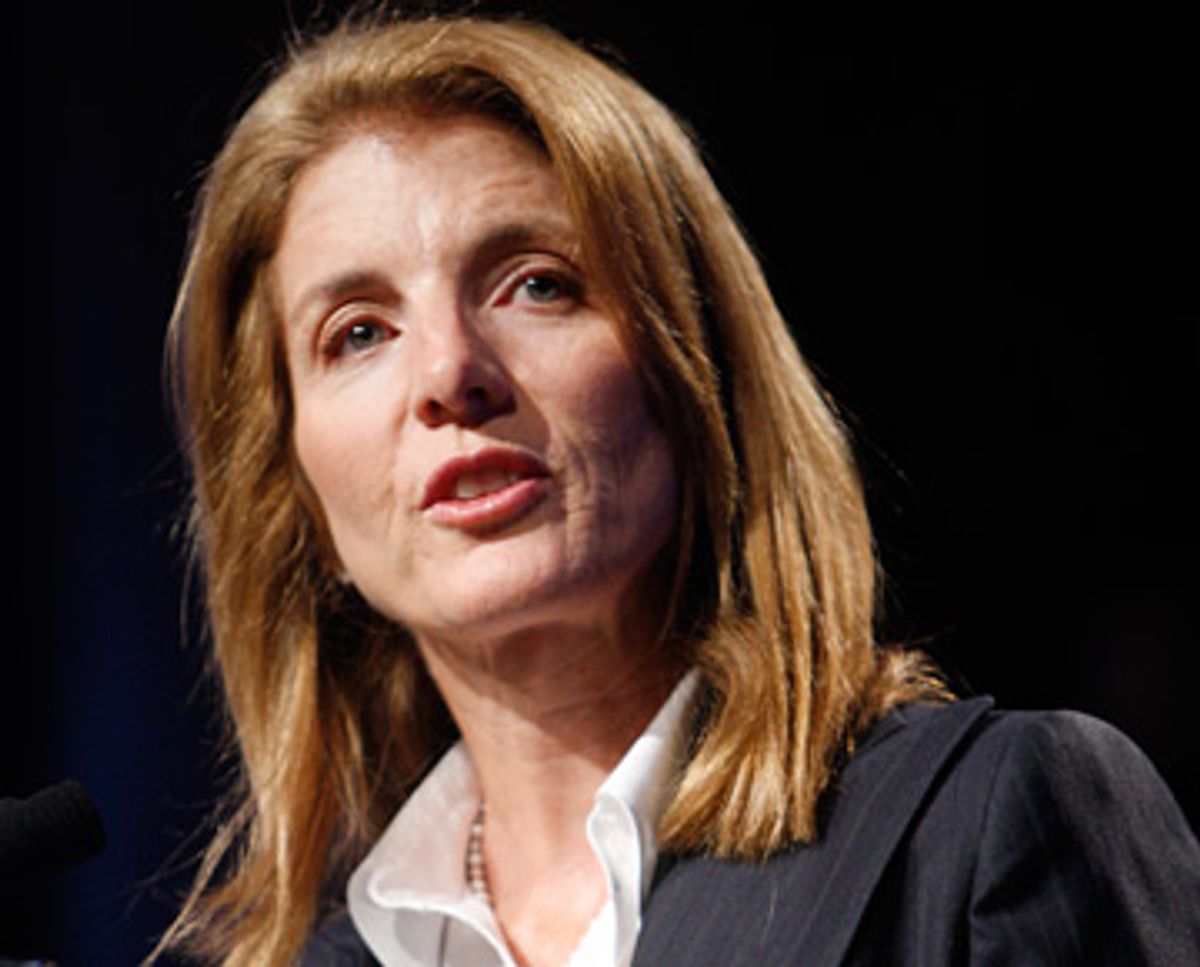 In this past Sunday's New York Times Magazine, contributing writer Lisa Belkin made a comparison between the plight of Caroline Kennedy, a New Yorker who never committed to a particular career path and is now hoping Gov. David Paterson will appoint her to Hillary Clinton's Senate seat, and Whitney Hoffman, a mother who has stayed at home with her kids for more than a decade, worked on a variety of professional projects, but is now nervous about how to return to the workplace full-time. Responding to critics' cries that John F. Kennedy's daughter is inexperienced and unqualified for the Senate job, Belkin links Kennedy's quandary to that of the many former professional or professionally educated women who were part of what Belkin dubbed the "opt-out revolution" five years ago, some of whom are now trying to make their way back into the ranks of the gainfully employed.

Belkin's larger thesis is that what constitutes experience is being redefined in part by post-Second Wave white-collar women, who are breaking professional barriers even as they continue to be hobbled by domestic (and some would argue reproductive) inequities. It's an intriguing observation, and perhaps a valid one. But Belkin's attempt to stuff Kennedy's Senate gambit into the same category filled by legions of women who want or need to return to jobs after years at home sheds more light on the challenges of opting back in than it does on Kennedy's crass play for political power.

Belkin's misstep is to claim that by urging Gov. Paterson to name her senator without ever running for office, Kennedy "is opting in" in a manner that remotely resembles the choices of her former stay-at-home peers, and that the resistance she is facing is merely "a magnified version of the eyebrows raised whenever women try to return (or, in her far more unusual case, to first enter) the paid workforce full-time." This is a distortion that does a disservice to Kennedy's truly extraordinary pedigree and circumstances, but a far worse one to the women with whom Belkin is comparing her.

"Take away the part about her father the president and her uncles the senators," Belkin implores, as if this were possible, asking us to similarly disregard Kennedy's Park Avenue address, familial dynasty, and what she implies is a gender-motivated "picking apart [of] her credentials." What we'll see, Belkin argues, is that "what is at the core of all this shouting is what, nowadays, counts as experience."

According to Belkin, there used to be a prescribed professional path that might take a young professional from assistant to associate to executive. That route is no longer mandatory, however, in an Internet age when credentials may zig and résumés zag. The tantalizing vision of women dropping out of the workforce to raise kids while their husbands charge toward promotions, and then returning to jobs in their 50s just as their male peers slow down, has opened a window in Belkin's mind to a possible professional universe in which there isn't a "ladder" to climb so much as a "lattice" in which the definitions of experience expand to make room for credentials that are not earned on a clock. Belkin writes that this future will only be made manifest "if experience ... is redefined. If what you do, and think, and produce, and change all count -- even if none of your activities take place in an office, where you enjoy a title and a salary."

It's certainly an interesting vision of a future in which women and men slide easily in and out of the workplace, trading off professional years for domestic ones, with the lessons and rewards of each feeding the other. But it's a future that, given rapidly changing technologies, a bleeding workforce and malingering second-shift ideas about whose shoulders bear the weight of familial and domestic responsibilities, remains a total freaking fantasy, and the high-wattage examples Belkin trots out to prove her points about experience fail to demonstrate how any of this has anything to do with Caroline Kennedy, or her qualifications for the job of senator.

According to Belkin, Hillary Clinton is an example of someone who, when she ran for the Senate seat on which Kennedy has set her sights, did so based on the argument that "a multifaceted life filled with experiences, if not experience, made her ready to serve." Belkin also suggests that President-elect Obama "presented a version of that argument as well," since he didn't have a traditional résumé, but voters gave him "credit for fierce intelligence and lessons learned from life" nonetheless.

Though Obama may not have had an ordinary presidential résumé, he had a strong one, with work as a community organizer and a constitutional law professor preceding his very traditional, if speedy, rise through the ranks of elected office. As for Clinton, she certainly was not without traditional experience; she was a lawyer -- the first female partner at her Arkansas firm, and often listed as one of the country's most influential lawyers -- for her entire adult life, after she became a mother and the first lady of Arkansas. She had an office, a salary, a title, the whole nine linear yards. The only time Clinton had a truly "non-linear" career path was when her husband was president of the United States, and she was booted from a position of official responsibility after the healthcare plan she devised for the nation bombed.

It is certainly true that prior to becoming the junior senator from New York, Hillary Clinton had never held elected office, but she did what it took to convince her bosses, the voters of New York, to hire her by voting for her in greater numbers than they voted for her opponent. Then she convinced them that she had done a good enough job in her first term to get them to rehire her for a second.

The difference is that Caroline Kennedy isn't asking to be evaluated or hired in this way. She is asking to be appointed, sidestepping the regular hiring process to which Clinton, and Obama, and the Whitney Hoffmans of the world have had to submit.

Belkin's long-term examination of the work-motherhood balance has often focused on worlds of privilege: the well-educated, hard-charging and formerly high-earning women who could afford to forsake all or part of their income, and who, she has fairly argued, represent the women in the best position to reap what were supposed to be feminism's professional rewards: power and position and paychecks. But to compare the circumstances and prospects of even the most fortunate specimens to Caroline Kennedy isn't quite right; nor is it correct to align the experiences of those lucky enough to make decisions about their careers and families with those women who have had little choice but to work to support themselves and their families.

The crux of Belkin's comparisons seems to come down, reductively enough, to the idea that motherhood dumps all would-be working women in one lumpy group of non-linearly-experienced professional outsiders. But it's simply not true that Caroline Kennedy's problems are the same as Whitney Hoffman's, a Penn State-educated mother of two outside Philadelphia. Caroline Kennedy could get a job at a law firm in the blink of an eye. I have no doubt that mothers, even the smaller subsection of full-time mothers, or professionally educated mothers, or opt-out mothers, share many desires, impulses and frustrations. That doesn't mean that they are at their core comparable to each other simply by virtue of having birthed children, or even by virtue of having decided to stay at home with those children.

For a woman like Hoffman, who Belkin writes practiced law only briefly before taking a 14-year "mom sabbatical" to raise her sons and now reasonably worries about what her decade-plus patchwork of part-time projects -- researching a law book, organizing conferences, helping to run the community education program for her son's school, and doing podcasts on learning disabilities -- will add up to in a job interview, a return to work is likely about knocking on doors, answering ads, perhaps returning to an old company or boss and presenting your credentials in the hopes he or she they will take a chance on you. That is what Caroline Kennedy would be doing if she were running for elected office the traditional way -- trying to persuade the voters of New York that regardless of what her résumé says, she has what it takes for them to hire her for a big job.

But that's not what Caroline Kennedy is doing. Instead, she's doing the equivalent of a stay-at-home mom trying to reenter the workforce by calling the CEO of her desired company, casually suggesting to him or her that she might like a top executive berth, and reminding them that her family's name is on the door of the building and that her uncle was a founding partner. She's applying the pressure of her family, her name, her legacy, to a boss who might also be considering hiring an equally qualified woman or man for that corner office -- one who has spent the years, with or without children, working toward the open position, but who does not have the home phone number of the CEO and the opportunity to get around the typical hiring requirements.

I agree with Belkin when she writes that this is not about whether Kennedy "deserves" a Senate seat -- or a job at the firm, or a place on the production line. I personally wouldn't care if Caroline Kennedy had spent the last 30 years playing the ponies while a team of elves raised her children on the forest moon of Endor; if she went out and campaigned and debated and met the voters and persuaded more of them to vote for her than voted for her opponents, then boom -- she's New York's senator, no questions asked or aspersions cast. She might be good at the job, she might be bad at it; she might get fired or rehired or she might decide she didn't like it much anyway and not run for reelection. But that's how you get that particular job, how you earn it, how you get hired for it, whether you've been putting in the hours toward it for your whole career or whether you've been raising your kids. You run for it. Seeking election to public office is a route that could be taken (and perhaps should be taken) by Whitney Hoffman, or any other women out there, stay-at-home or otherwise, who feel their community could benefit from their leadership. It is, after all, a path that worked for the current governor of Alaska, a woman whose credentials were questioned even more roughly than Kennedy's have been, but who at least had been elected to office by the people of her state.

In her "Opt-Out Revolution" piece from 2003, Belkin wrote that "If [the] workplace can reabsorb those who left into a career they find fulfilling, then stepping out may in fact be the answer to the frustrations of this generation. If not, then their ability to balance life and work will be no different than their mothers' after all." The fear, anxiety and seeming improbability of reentry faced by Whitney Hoffman presents the depressing suggestion that the latter of Belkin's forecasts is coming true, and Belkin is right to point it out.

But I really don't think it has anything to do with Caroline Kennedy.