How far should Obama go for GOP support?

Obama shouldn't sacrifice his stimulus plan's power trying for lots of GOP votes. Plus: Why Panetta is a great CIA choice. 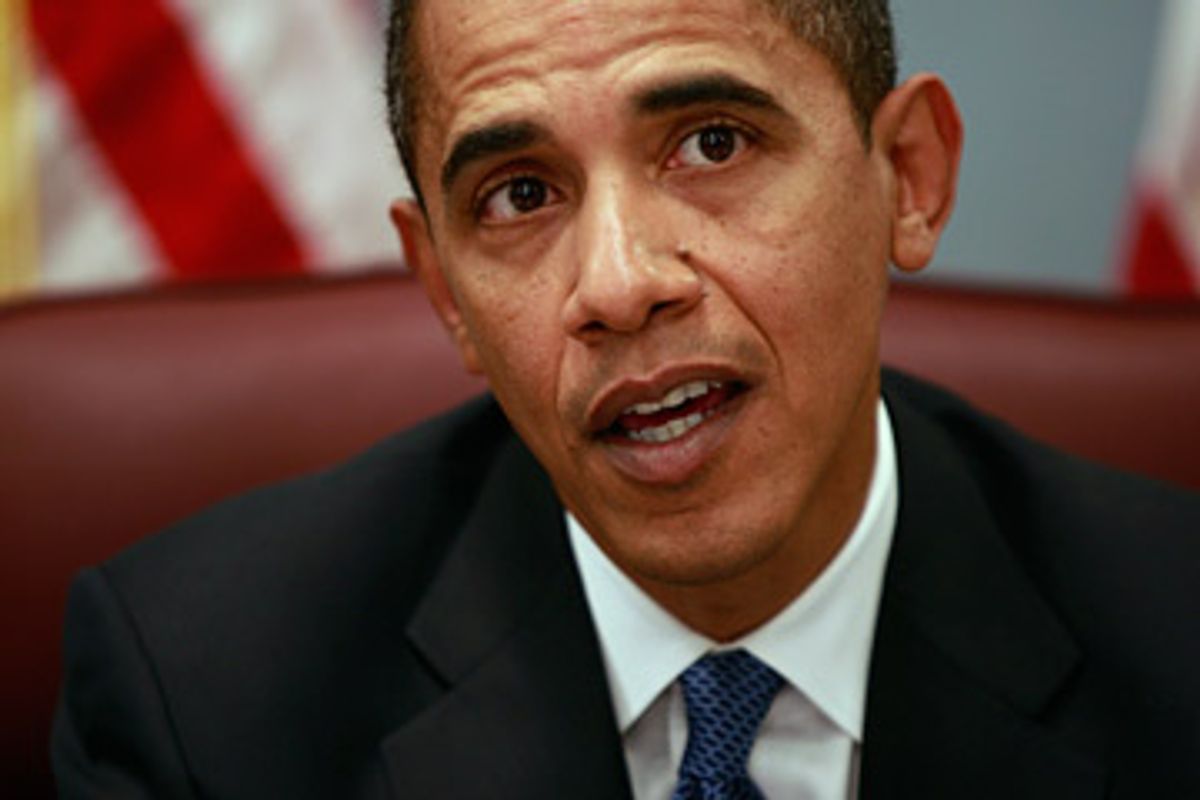 I'm going to give Barack Obama the benefit of the doubt on his decision to include long-promised middle-class tax cuts in the upcoming stimulus package. With Republicans and other observers attributing the decision to GOP kvetching about his ambitious planned stimulus package, Obama denied that politics motivated him to include the tax cuts, at a short press briefing Monday morning.

It's true: He campaigned on the tax cuts for two years, and they were a significant boost in his campaign against John McCain, with nonpartisan fact-checkers finding that Obama's plan put more money in the hands of middle-class families than McCain's plan, which favored the wealthy. There's no reason not to make the tax cuts a cornerstone of his plan. Tax cuts also happen to be one quick and accepted stimulus solution, since they put money in real people's hands faster than jobs programs or even aid to cities and states can.

So they're a fine start -- but just a start. Paul Krugman is only one expert to express doubt about whether the tax cuts should make up such a large portion of the stimulus plan. (In some accounts, the tax cuts for families as well as businesses could amount to 40 percent of the overall stimulus package.) He's right. In this economy, the money in middle-class hands may well not be stimulative; people mainly spent last year's Bush tax rebates paying down debt and buying necessities, not on economy-stimulating new purchases. The Obama plan will also have to extend unemployment, create jobs, help with health insurance, and provide aid to cities and states as well. Big questions remain about how much of the package the tax-cut plans will actually represent.

Clearly Obama's doing some of this for political reasons, and that's not all bad. I think it was great to open the year with today's bipartisan, bicameral meeting with congressional leaders. As Obama frequently says, he's going to be everybody's president, and he's got to at least start out by giving Republicans the benefit of the doubt that they want to help the economy. I do worry about a Politico story on Monday saying the president-elect would like to get 80 votes for his stimulus plan in the Senate; that seems unlikely to me.

I felt more strongly about that after watching what came out of today's Happy New Year meet and greet, which was nearly overshadowed by the Republican-friendly tax cut announcement. Still, the dour duo of GOP leaders Mitch McConnell and John Boehner didn't seem happy; they weren't terribly gracious about Obama's gestures. McConnell continued to call for more tax cuts and a loopy insistence on loans, not grants, to cash-strapped states and cities, with Boehner sounding particularly dyspeptic about the rumored "size of the package."

Floating goals of 80 votes to the Politico is a dicey move for Obama's folks. He's setting himself up for failure, and unnecessarily irritating his liberal base with more futile pandering to people who will likely never support him. I won't hold the tax cuts against Obama; I particularly like the "Making Work Pay" credit for people who earn too little to pay taxes (borrowed language from the Clinton administration's program to expand the earned income tax credit and other supports for low-wage workers).

But he is unlikely to get 80 Senate votes on the stimulus if he made it 100 percent tax cuts and loans to cities and states. He's right to reach out; he'd be wrong to dilute his proposal to the point of ineffectiveness in order to get a big Republican vote for his plan.

In other Obama news: I wasn't sure what to make of the appointment of Leon Panetta as CIA director -- until I heard that Sens. Dianne Feinstein and Jay Rockefeller opposed it. That's not entirely true: I thought the competent and popular Panetta, who came out strongly against Bush administration torture, detention and interrogation policies, was a clear message that Obama wants to change the way our intelligence agencies do business. The two Democrats' pique -- they say Obama didn't vet Panetta with them -- is a good sign that Panetta's not viewed as an insider who will simply roll over for what the intelligence establishment wants, since Feinstein and Rockefeller did little or nothing to stand up against Bush policies (and Glenn Greenwald agrees with me.)

On MSNBC's "1600 Pennsylvania Avenue," I said I trust Obama and Panetta on these issues far more than Feinstein and Rockefeller. Pat Buchanan and David Shuster predicted the opposition of Feinstein and Rockefeller would liberate congressional Republicans to savage Panetta in confirmation hearings; I trust he'll make it through, with Obama's strong backing.